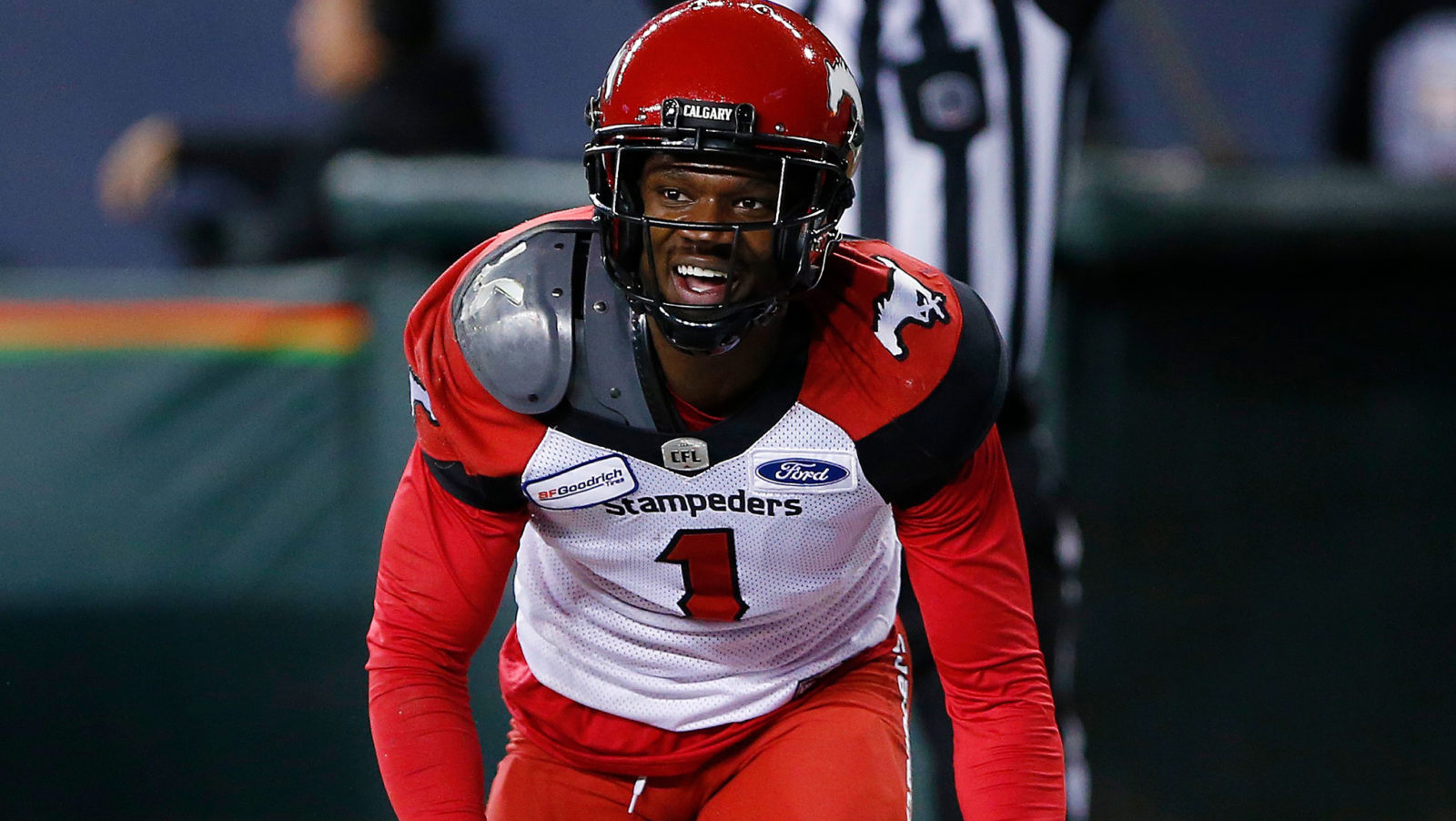 The Calgary Stampeders are no strangers to having top-flight receiving talent in house, and after an uber-impressive rookie year, Canadian Hergy Mayala looks to be that next star-in-the-making in Cowtown.

The 24-year-old just got stronger with each outing and will be trying his best to carry that momentum into the off-season and his sophomore campaign.

“Going into this year, I want to be known as one of the best receivers in the league,” Mayala said of his expectations for 2020. “I just want to show the people across from me that I’m going to go out there and compete and win.” 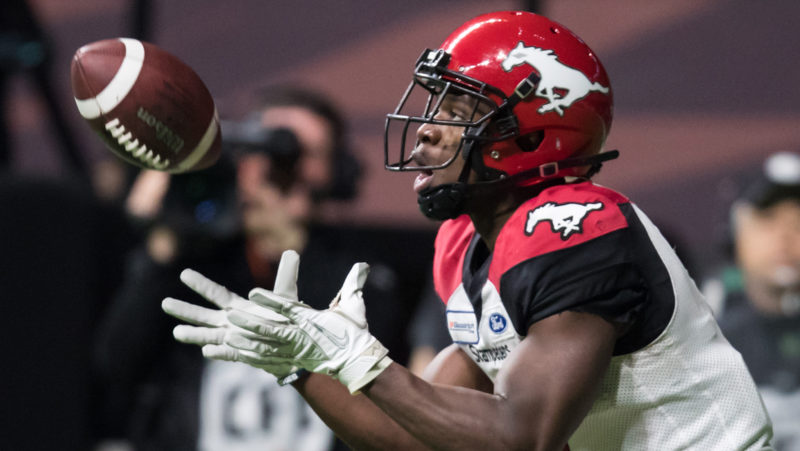 Calgary Stampeders receiver Hergy Mayala reels in a ball against the BC Lions. (The Canadian Press)

Heading into the 2019 CFL Draft, Mayala was one of the most exciting prospects on the board. At one point, he was ranked as high as second overall in some mock drafts.

“When you see those numbers, I was expecting my name to get called early,” Mayala said. “But I also wanted to go to the right situation and a situation where I could thrive in the system and everything around me.”

He managed to fall all the way to the end of the first round and into the laps of the defending champion Stampeders, who scooped him up with the ninth overall pick.

“It definitely just felt like there was a lot of weight off my shoulders,” he said. “Everybody that plays football works towards becoming a professional, and getting that call was a part of my dream. It was where I wanted to be and get started.”

Mayala couldn’t have ended up in a better situation for a young pass-catcher. Calgary had a multitude of talented receivers to learn from, along with a former Coach of the Year award winner and the 2018 Most Outstanding Player and Grey Cup MVP.

However, it wasn’t a seamless transition for Mayala. He had to get accustomed to the nuances of the Calgary offence and how both head coach Dave Dickenson and Bo Levi Mitchell liked to run things.

“It was a little hard, I’m not going to lie,” Mayala said about getting accustomed to the CFL game. “Going from 11 to 12 men and going from motion to being on the line every time. The playbook is similar but adding the 12th man brings a whole different view of the play.

“It took a couple of weeks, but once I got it, it was like normal.”

Because of the talent at the position, he was able to sit back and learn behind the likes of Reggie Begelton, veteran Eric Rogers and fellow Canadian Juwan Brescacin. That trio opened the year as the primary targets in the Calgary offence, however, Brescacin battled injuries and didn’t feature in a game for the Stamps following their Week 7 game against the Ottawa REDBLACKS.

Injuries would be an issue at times with their receiving core. Begelton and Rogers each missed a game during the year, and with the absence of Brescacin, the Stamps’ depth was tested.

“It was a lot of fun for us to get our numbers called and I think we showed that.” 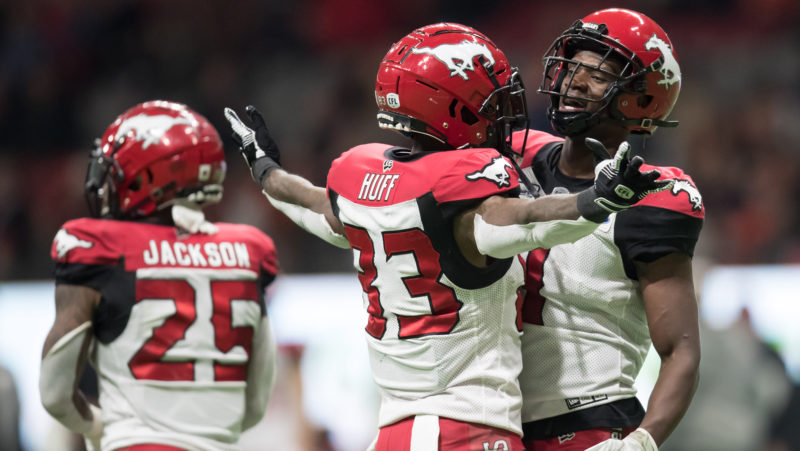 Calgary Stampeders receivers HErgy Mayala (Right) and Josh Huff celebrate a touchdown against the BC Lions. (The Canadian Press)

Mayala said that he started to gain more confidence during the team’s Week 15 game against Toronto, where he was targeted more by Mitchell than in any other prior game during the year.

A week later, he had his biggest outing up to that point, catching all three of the balls thrown his way while gaining 116 yards on the Alouettes’ defence. His largest contribution on the day came in the form of a 68-yard catch-and-run down the left sideline that set the Stamps up for a score.

That game served as the first time that Mayala was able to play in his hometown as a professional.

“I just felt like I needed to show up. They hadn’t seen me play in forever and I just wanted to show them that I was still the kid they used to watch,” he said. “After that catch and after the game, I just really felt like I got the momentum and I just took off from there.”

Mayala continued to get the ball down the stretch. In Week 18 against Saskatchewan, he’d get his first career touchdown reception when Mitchell found him on a slant route through the middle of the field. He finished the game with five catches for 70 yards and two scores.

“That week, I remember, was a great week of practice for me,” Mayala said. “I remember just doing everything extra and I was told how big the game was. So for me to go in there, Bo gave me some chances and coach Dicky called my name.

“I was just thankful that I was able to do it in front of our fans. I was excited that they were the ones to see the first one.”

Mayala added that he had a celebration planned, but because of the emotion that came with the moment, he ended up celebrating with the fans instead.

“I just felt thankful to be there and I went into the crowd to thank them for believing in us,” he said.

During that span of hot play, Mitchell revealed in a scrum that the rookie receiver had a new nickname.

An ode to rapper ASAP Ferg, Mayala explained that it was a quip that just stuck in the locker room.

“ASAP Herg came about because I dance a lot,” he said. “We were playing ASAP Mob in the room and I was dancing. (Rogers) looked at me and said ‘we’re gonna start calling you ASAP Herg.’ Then he just screamed it in the locker room and Josh Huff heard it and Reggie heard it. It just went around and got bigger from there.”

After the quarterback revealed the moniker to the world, it seemed as though the touchdowns and big games were coming with regularity for Mayala.

He finished the season with 571 yards and five majors on 39 catches, with a majority of that production coming in the back half of the year.

Ahead of the 2019 season, Begelton was voted as the player expected to have a breakout year. He didn’t disappoint, having the best year of his pro career and bridging it into an NFL deal. Now, the Stamps have another breakout candidate in Mayala, who is getting hype as a major threat for Calgary in 2020.

Despite that, he’s just focused on what he can control on the field.

“I’m just working and doing what got me here. It’s just hype, but at the end of the day, I have to go out there and prove that I’m every bit of what everyone says I am,” Mayala said. “I’m just going to go out and work with the offence we have and the quarterback that we have and just hope that I can get opportunities.”