Arbuckle: ‘Ottawa has always been a soft spot in my heart’

Arbuckle: ‘Ottawa has always been a soft spot in my heart’

OTTAWA — Sitting in front of the media with a beaming smile and a ‘Daddy to be’ pin on his chest, new Ottawa REDBLACKS quarterback Nick Arbuckle was excited to start putting down roots in the nation’s capital.

Arbuckle did the media rounds for the first time as an official member of the REDBLACKS on Friday. The two sides came to terms on a two-year contract on Jan. 31. 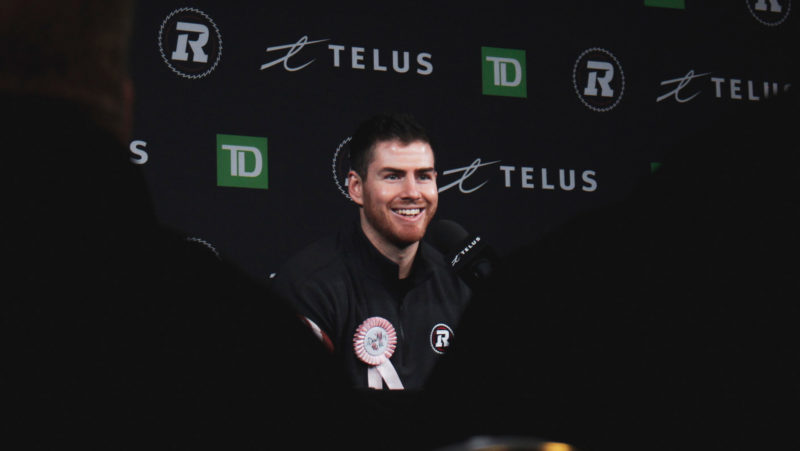 He and his wife Zakiyya are expecting their first child around the start of training camp. During his career, he said he’s always enjoyed the trips to Ottawa as a visitor and envisioned it as a landing spot in free agency.

“As a city, and I told my wife this, it was always my favourite city to come and play in,” Arbuckle said. “I’m not really ever the person that leaves the hotel and goes out and does things. But whenever we came to Ottawa, I would always want to walk around, go to a restaurant and see the mall. When I got a chance to start last year, I got to see more of the stadium and the pre-game media and I got to see the canal.

“(Ottawa) has always been a soft spot in my heart,” he said. “This is a place in Canada that I really like going to and that I wanted to take my wife to.”

Arbuckle was able to get in some pivotal game action while heading into an off-season where he was set to become a pending free agent.

Following a pectoral injury to Stamps starter Bo Levi Mitchell in Week 3, Arbuckle took over the starting duties for the next seven games. He completed 73 percent of his passes for 2,103 yards and 11 touchdowns. When Mitchell returned, Arbuckle went back to backup duty, however, his efforts didn’t go unnoticed.

The REDBLACKS traded for Arbuckle’s rights, giving them a month to get one of the top quarterbacks available under contract.

Arbuckle enters a situation in Ottawa where the franchise is coming off the worst season in its short history.

Despite a 2-0 start to the 2019 campaign, the REDBLACKS lost 15 of their last 16 games en route to finishing with the worst record in the CFL. During the year, the team cycled through Dominique Davis, Jonathon Jennings and Will Arndt at points during the year.

The lack of success led to the dismissal of head coach Rick Campbell. In order to right the ship, general manager Marcel Desjardins brought in Paul LaPolice, who helped lead the Winnipeg Blue Bombers to their first championship in over two decades this past season.

LaPolice was able to work with three different quarterbacks during the season, with two of them working in a platoon system down the stretch to help the Bombers get to the 107th Grey Cup presented by Shaw.

“It was an incredible system and Dave (Dickenson) is a great play-caller and a great coach, but I know that LaPo is a great coach as well and he was a guy that I really admired watching,” Arbuckle said of his new head coach. “Watching his offence and playing it in scout team the last few years, he’s a guy that I really wanted to play for and an offence that I wanted to be in. For me, it’s just doing the things that made me successful in the past.

“That’s just being efficient, making good decisions, taking care of the football, taking shots downfield when they’re presented to you and making sure you’re giving your team a chance to win at the end.”

With LaPolice helping him along in his development, Arbuckle will try and make the next step towards becoming one of the top signal-callers in the league. With the REDBLACKS looking for the man to lead their team both on the field and in the locker room, Arbuckle said he isn’t sweating this situation.

“I don’t feel a lot of pressure, I just feel a lot of confidence in what I’m capable of doing myself on the field and what I can bring to a team,” Arbuckle said. “That confidence from the work I’ve put in and what I’ve always tried to build myself on is that nobody can outwork me and nobody is more prepared. When it comes to every play on the field, nobody is more prepared for that play, that situation than I am.

“That’s kind of where I draw my confidence from and the work that I put in and the things that I can control myself. I try to let that alleviate as much pressure from the outside as much as I can.”

After joining the REDBLACKS, the pivot received messages from several current and former Ottawa players, who only sung praises about both the city and organization. One person that Arbuckle made a point of reaching out to was Henry Burris, who finished his career with the REDBLACKS, who gave him some advice about family and playing in Ottawa.

“(Ottawa) has always been a soft spot in my heart. This is a place in Canada that I really like going to and that I wanted to take my wife to.”

When asked about spending time past his new deal in Ottawa, Arbuckle revealed that he’d love to call the nation’s capital home until his playing days come to an end — and possibly past that.

“I think it’s every player’s dream to be in one place for their entire career; to be able to start and retire in one place, and it’s definitely a dream of mine to be able to do that,” Arbuckle said. “I always tell me wife and people that I don’t think there’s another profession — or not many professions — that would allow me to be as good of a husband and father than the CFL. Just because of the time that we’re able to put in.

“It’s a profession where I could see myself picking up my kids from school every day of the week and be able to be back home for dinners and be able to spend a lot of time in the off-season with my family. So I want to be able to play this game for as long as I possibly can because I know it’s going to allow me to do the things outside of football that I really want to be able to do as well.

“If Ottawa would want to keep me around for that long, then it would be a dream come true to play until I can’t anymore.”