TORONTO — After all the buildup, we’re just 48 hours away from the official opening of CFL Free Agency on Feb. 11.

Who will end up in new places? who will get a big payday? And which teams will turn around their luck with some new talent? We don’t have to wait long to find out.

On the latest episode of The Waggle presented by Sport Clips, Davis Sanchez and Donnovan Bennett chat with TSN’s Dave Naylor about CFL Free Agency, who could garner the most interest and what strategies teams may employ.

EPISODE OVERVIEW: With just one week left before the chaos of Free Agency begins, Dave Naylor joins Donnovan and Davis with predictions and analysis of all the biggest signings. CFL.ca’s Chris O’Leary also stops by to explain the new free agency window and what it means for fans of the league. Later, Donnovan wants to dig into Davis’ childhood memories for this week’s edition of “Objectionable Conduct”.

“I think that’s historically true in the CFL. I’ve known GMs in the past that have picked their spots. And when I say picked their spots, I mean go after a Canadian,” Naylor said of some team’s strategies. “Let’s look at a guy who’s gotten paid in free agency like Ted Laurent. Every few years, his contract comes up and he gets paid. The problem is if you don’t get Ted Laurent to play in the middle of your defensive line, there’s no other Ted Laurent that qualifies as a Canadian.

“You can’t go get him, you can’t draft him; he doesn’t exist. So that position is going to flip to an American and you’ve got to go find a Canadian somewhere else.”

Canadians are always highly sought after every year in free agency, and 2020 is no different. Every position offers options that hail from north of the border as well as some American players that are considered National players. Despite that, the top names on the board are predominantly from down south.

Take defensive lineman Willie Jefferson, who is unquestionably the most sought-after individual on the market — and the No. 1 ranked Pending Free Agent by CFL.ca.

Jefferson has been in Ontario over the past few days, reportedly visiting with the Toronto Argonauts and Hamilton Tiger-Cats. The reigning Most Outstanding Defensive Player won’t be short on suitors following a massive 2019 campaign that ended with a championship in Winnipeg.

“I think the guy who could be the big winner is Willie Jefferson,” Naylor said when asked who the top-paid free agent could be. “I’m going to have to put this into some context after what was just said about not paying Americans. Willie Jefferson is a freak. There is no other Willie Jefferson. Dave Dickenson said at one point in the season that he wondered aloud why this guy was not in the National Football League.”

Jefferson finished with 24 tackles, 12 sacks, an interception and six forced fumbles on the year. Jefferson saved his best performance for the biggest game of the year, making a pair of tackles while dropping the quarterback three times and forcing two fumbles.

With pass-rushing being at such a premium in the league, the 29-year-old is going to make a team very happy this off-season. But which location makes the most sense for him?

“Toronto, Montreal — when you look at Montreal, their biggest deficiency last year was creating pressure on opposing quarterbacks, getting sacks and getting pressures,” Naylor said. “In BC, I think the Odell Willis and Shawn Lemon era is kind of done there. Those are all teams I think that if you added a Willie Jefferson to their starting lineup, you create a massive improvement and really change the dynamic up front.

“I know Winnipeg wants him and I know he was really happy in Winnipeg last year with the whole experience. Every team would love more ability to get to the quarterback. Montreal is interesting because they’re a good team that had deficiency in that area.”

From one player who expected to get a big payday on Tuesday to another, Derel Walker is looking at his second go-around in free agency in as many years.

The 28-year-old made the move from Edmonton to Toronto last year, with the Boatmen making him the highest-paid receiver in the league.

The only problem with that was the Argos’ utilization of Walker for the majority of the season. After being targeted just 13 times total in the first three games of the year, he had that many looks in Week 5 against Winnipeg.

Walker still finished the year with 1,040 yards and six touchdowns on 65 catches, but it was a tough year all-around — that was also compounded by the Argos’ struggles in 2019.

As for where the uber-talented pass-catcher could land in free agency, Naylor believes it could be a squad he’s familiar with.

“You know where Walker would be an interesting fit? Edmonton,” he said. “We talked about how the Eskimos couldn’t score in the red zone. They’d get inside the 20 and all of a sudden, it was field-goal-o-rama. And you’d look at your receiving group and say these are all good receivers. But did they have that guy that you looked at and said ‘OK, he’s big, physical and can separate and in a 20-yard end zone can be unstoppable,’ — like Adarius Bowman was in his prime for the Eskimos, like Derel Walker was when he was there.

“Maybe a team like Edmonton is looking at him and saying ‘what do we need to do? We have a good offensive line, a good running back with Shaq Cooper taking over if that’s the way it goes over C.J. Gable, we’ve got a good quarterback and receivers who are all very good. But do we have that one guy?’

“That’s a situation where a team might want to pay a guy instead of a group because they just so often couldn’t get it done inside the red zone.” 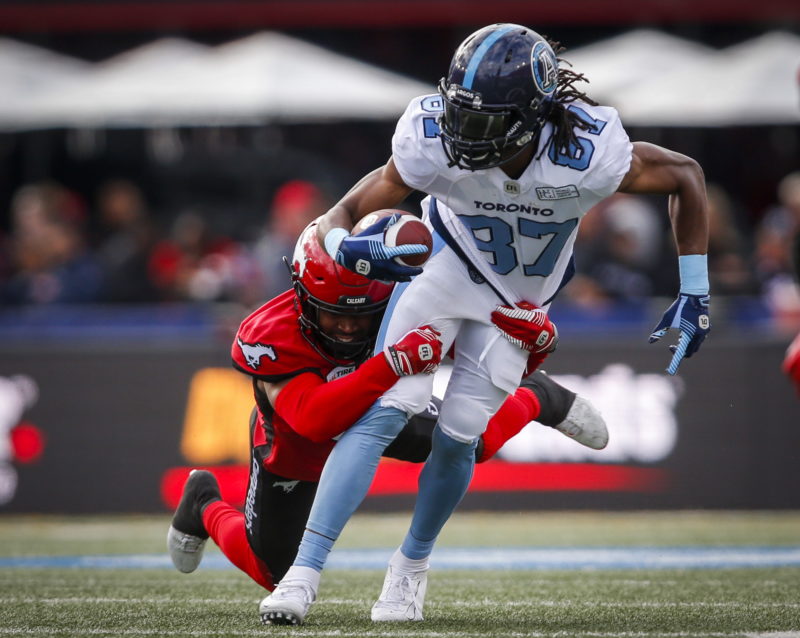 Edmonton is one team that is going through a shakeup on their sideline. New head coach Scott Milanovich will be trying to help the Green and Gold take the next step towards being a Grey Cup contender. He’s not the only new face, however. Paul LaPolice, Rick Campbell and Ryan Dinwiddie have taken over in Ottawa, BC and Toronto, respectively, and are all tasked with turning their teams around and making the playoffs in 2019.

There’s also Khari Jones, who isn’t a new head coach but will be the head coach of the Als in the off-season for the first time — he was the team’s offensive coordinator at this time last year.

With all of those head coaches trying to put their stamps on their respective organizations, we could see some players move to new locales to team up with a familiar face from the past.

“I think so because guys have histories. Whether it’s Ryan Dinwiddie or Paul LaPolice and Rick Campbell. Those are the best examples I think because when you fail, there’s such a tendency to just go all new. Usually, there’s not as much pressure to win right away — BC may be a little different because of the expectations that were not met last year. I think in Toronto and Ottawa, if those teams go 7-11 or 8-10, that would be considered a good season.

“There’s a tendency to just tear down the roster. It’s a part of what you’re doing and you’re going in a new direction and coaches aren’t going to be committed to players who didn’t get it done last year. Coaches and GMs tend to want to associate with guys they’ve had success with in other cities. I would expect to see that dynamic in some of those situations.”

Regardless of who you cheer for, free agency is sure to provide intrigue, shock value, and entertainment ahead of what should be a fantastic 2020 campaign.