CALGARY — The Calgary Stampeders have added an All-Star to their secondary, signing defensive back Richard Leonard to a contract on Tuesday.

“Richard Leonard plays in space as well as any defensive back in the league, bar none,” said CFL.ca’s Davis Sanchez. “The Stamps have lost three guys in their secondary and it was a must that they sign a top tier halfback in day one of Free Agency. In zone or man coverage, Leonard is a player.” 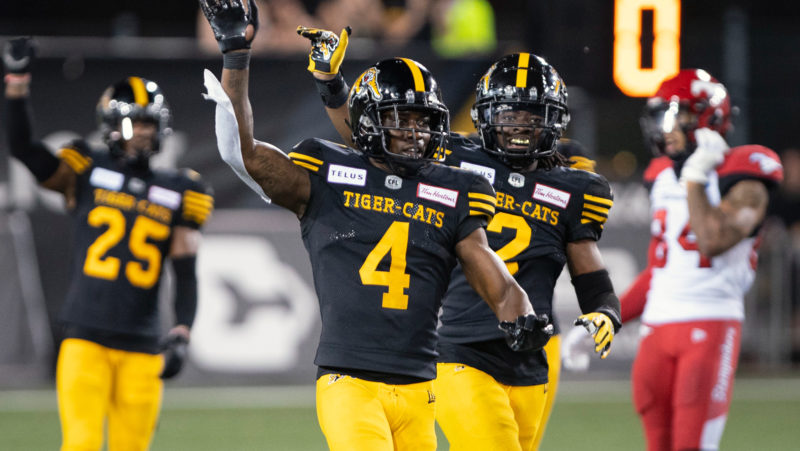 Richard Leonard is heading West, signing a deal with the Calgary Stampeders (The Canadian Press)

Leonard spent the first three seasons of his CFL career with the Hamilton Tiger-Cats, earning CFL All-Star honours in 2019 and East Division All-Star recognition in 2017 and 2019.

He started all 18 regular-season games at halfback for the Ticats in 2019, registering 55 tackles including two tackles for loss, four interceptions including one returned for a touchdown, two forced fumbles, one fumble recovery and eight knockdowns. Leonard started both the Eastern Final and the Grey Cup and recorded nine tackles including one tackle for loss.

In 49 career games, Leonard has 12 interceptions to go with 178 tackles including six tackles for loss, one special-teams tackle, three forced fumbles, four fumble recoveries and 31 knockdowns. He has scored two career touchdowns including an 84-yard return after the recovery of a blocked field goal in his CFL debut.

McGough, a Medicine Hat product, was selected fourth overall by the Hamilton Tiger-Cats and he played 51 games for the Ticats over three seasons. McGough has 33 career special-teams tackles, 14 defensive stops including one tackle for loss, one sack, two forced fumbles and one knockdown.

McGough played four years for the Dinos, earning Canada West all-star honours in 2014 and 2016, and was named a second-team all-Canadian in 2014. In 26 career games for the U of C, McGough amassed 67 tackles including 17 tackles for loss and nine sacks. He started his university career at running back before making the switch to the defensive line. He was part of two Hardy Cup-championship teams with Calgary.

The kicker also played for the Ottawa REDBLACKS in 2016, where he won his first Grey Cup, and was an Argonaut in 2015.

The team also announced that defensive back Branden Dozier has accepted a qualifying offer from the Stamps during the CFL’s newly introduced negotiation window.

Dozier joined the Alouettes in 2017 and played 35 games for Montreal, earning an East Division All-Star nod in 2018. He signed with BC in June of 2019 and started 16 games for Lions, leading the team with 70 tackles.

In 51 games, he has 220 tackles including two tackles for loss, 40 special-teams tackles, two sacks, six interceptions, 11 knockdowns, three forced fumbles and one fumble recovery that he returned for a touchdown.

The Stampeders also announced that the team has re-signed quarterback Montell Cozart.