O’Leary: Wynn ready to take the next step in Hamilton

O’Leary: Wynn ready to take the next step in Hamilton

Dylan Wynn felt the suspense and followed some of the will-he won’t-he about his pending free agency. If his future with the Hamilton Tiger-Cats felt up in the air to fans, Wynn understood that but it was something he never really doubted himself.

The 26-year-old defensive tackle listened to other teams’ offers over the past week but did what he thought he would all along and signed a two-year contract with the Ticats on Tuesday, keeping him where he had a career-changing 2019 season.

“It’s cool, but part of me knew I was going to stay in Hamilton,” Wynn said from his Benicia, Cali. home on Wednesday.

“It’s not as surprising to me as it is I guess everyone else, but it’s nice when you get the keys to the car and you kind of know where it’s going.”

Wynn joined the Ticats last season with a brief CFL resume. He was an important part of the Argos’ Grey Cup-winning defence in 2017 and was with them for the 2018 season before he signed with the Alliance Football League. When that league folded, Wynn found his way to the Ticats in time for the start of the 2019 season.

He became an integral part of Hamilton’s defensive line. His 44 tackles and 11 sacks were career highs and helped lift the Ticats to their first Grey Cup appearance since 2014.

“The Ticats are getting a guy back that controls the line of scrimmage,” CFL.ca’s Davis Sanchez said of Wynn.

“Every team wants and needs a strong d-line but it’s imperative for the Ticats. The style of defence that Mark Washington likes to call and that head coach Orlondo Steinauer has always called is one that doesn’t blitz as much. They’d rather play coverage and hope that their front four holds up.”

The Ticats coaching staff and Wynn’s teammates helped him take the next step as a player last year.

“From an X’s and O’s standpoint, our d-line coach, Randy Melvin is the best d-line coach I think I’ve had…I think ever. He’s very good at what he does. He’s very passionate and he knows how to communicate, at least to me, the way I need to understand things in the game and off the field. Excellent, excellent character. I can’t give him enough praise on that.

“Then my teammates really make an environment where I thrive. I said throughout the season, you can’t double team all of us. We’ve got some monsters on this line and I’m really excited to come back and get word from within.” 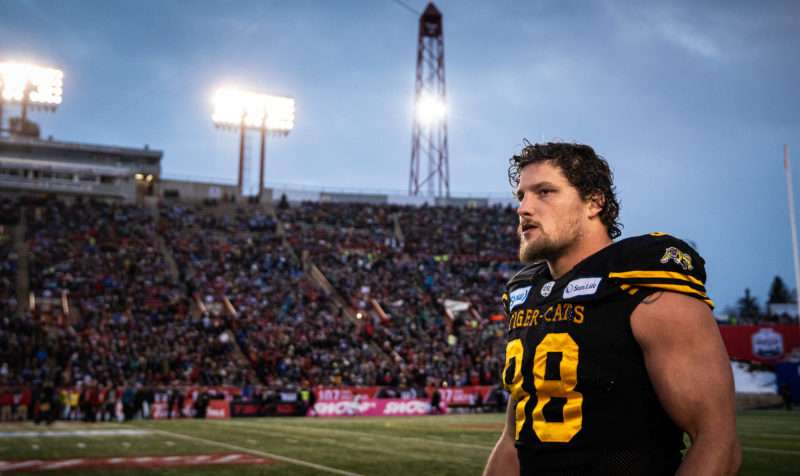 Wynn and his Ticats teammates will try to turn the sting of a Grey Cup loss into motivation for the 2020 season (Johany Jutras/CFL.ca)

He’ll return with that d-line intact. The Ticats extended Ted Laurent and Julian Howsare in January and kept Ja’Gared Davis from going to free agency, signing him on Monday. The Ticats’ 54 sacks last year were two off of the league lead, putting them just behind Edmonton and Saskatchewan. Wynn sees them and the Ticats’ defence — linebacker Patrick Levels has joined the team in free agency — only getting better in 2020.

“Hopefully we can just do well in camp. I always take it one day at a time and nothing’s guaranteed you know?” Wynn said.

“With all the craziness that happened in the league last year, you don’t know how things are going to shake down by June. But just having a little comfort coming into camp, I’m excited. Instead of having to learn a whole new team again and everyone walks around, kind of sniffing each other, you know,” he laughed, “we have that chemistry a lot earlier. We know how to play off of each other, which I believe as a defensive line is crucial to being elite.”

Wynn’s off-season has been one full of work. He says his wife jokes with him that he has more free time during the season than he does in the winter months.

“I treat my off-season very, very strictly. I’m kind of obsessive on that,” he said.

“It’s a season that I can control and there’s nothing else I really have to do besides get ready for the next season. I kind of go crazy on it. I have a few things in store. I want to reach my goals, but I think I’m going to keep those goals a secret.”

After helping the Ticats to their most successful regular-season in team history but falling short in the Grey Cup game in Calgary, a return trip to the championship game is no doubt high on that goal list.

“It sucked losing the Grey Cup, for sure,” he said.