Every team has its own approach to CFL free agency. By any combination of needs, wants, salary cap flexibility and desire to chase that one player you believe might make a game-changing play, all nine franchises make clear statements in the dead of winter on how they want to look and play come warm sun and game day fun this summer.

In 2020 there were very distinct trends on the varying approaches of each CFL team. Extreme approaches caused by an equally extreme 2019 season and early off-season.

As the silly season of coach and executive movement progressed in December and January, it became clear that some teams would be driven to re-sign large amounts of their cores in hopes of making another deep run in the CFL playoffs.

On the other end of the spectrum are the Argos, who made a clear decision with their front office changes that they were sure to influence off-season player personnel movement strategy. 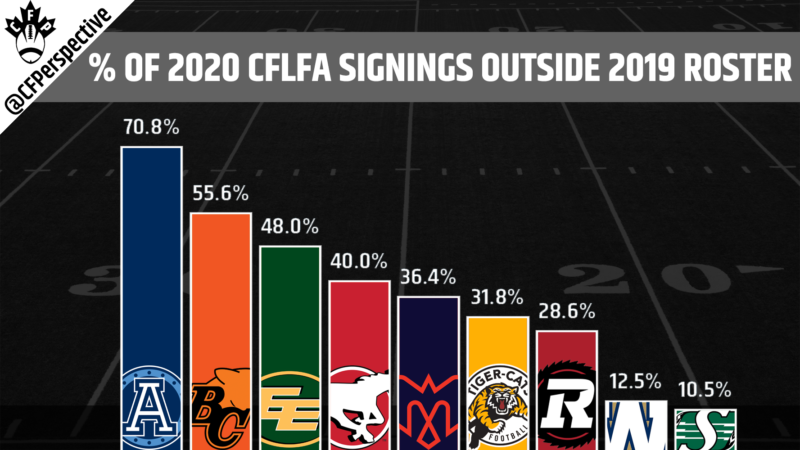 As free agency burst into the national sports media conversation this week, I have to admit chuckling at the wild fluctuations each fan base displayed from signing to signing.

“Why aren’t we announcing any big names?!”

“Where are they getting all this money from?”

These were just a few of my favourites. They also could have all come from the same person, depending on when you checked in with them over the past three days. 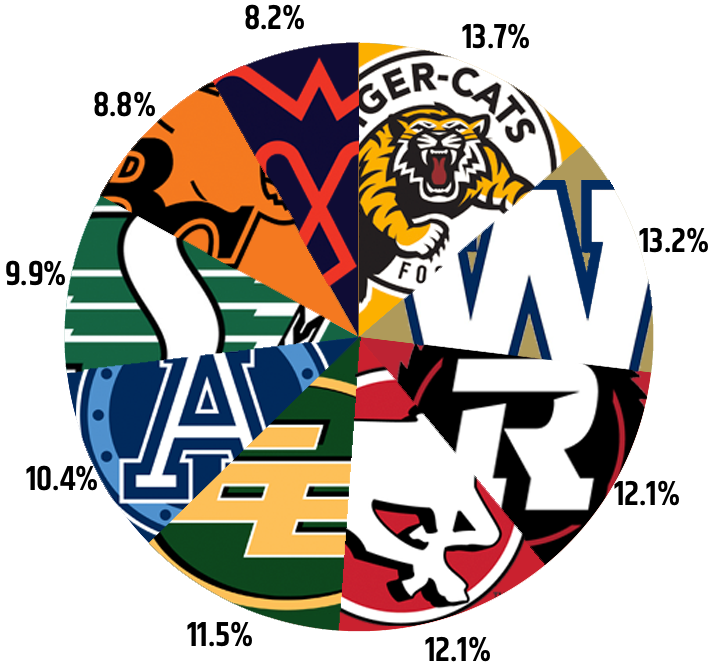 Above is the percentage of total CFL free agency signings by team, dating back to Grey Cup Sunday right up to Friday, Feb. 14. The Ticats lead the way after maintaining a large chunk of their core while also staying aggressive when the market opened on Tuesday. It’s a similar formula followed by their Grey Cup nemesis, Winnipeg.

Danny Maciocia said early on in his tenure as Alouettes GM that Montreal was up against the cap and wouldn’t be all that aggressive. That held true, despite the team being able to bring back important defensive line pieces and add local French Canadian talent, which should excite the reinvigorated Als fan base. 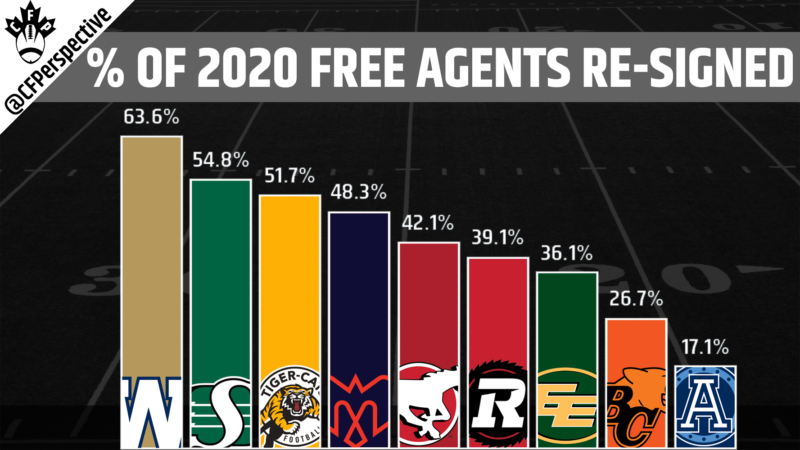 Perhaps the most interesting part of #CFLFA 2020 — from the perspective of a guy who spends four hours on live radio each year breaking it down — was the lack of movement in certain positional groups.

For hours, the receivers available in free agency didn’t budge. A name here or there was picked up, but DaVaris Daniels to Toronto was the only true bombshell. After that, I thought the pass-catching floodgates would open, but it took a full day for DeVier Posey to land in Hamilton and as of writing this Derel Walker is still unsigned. 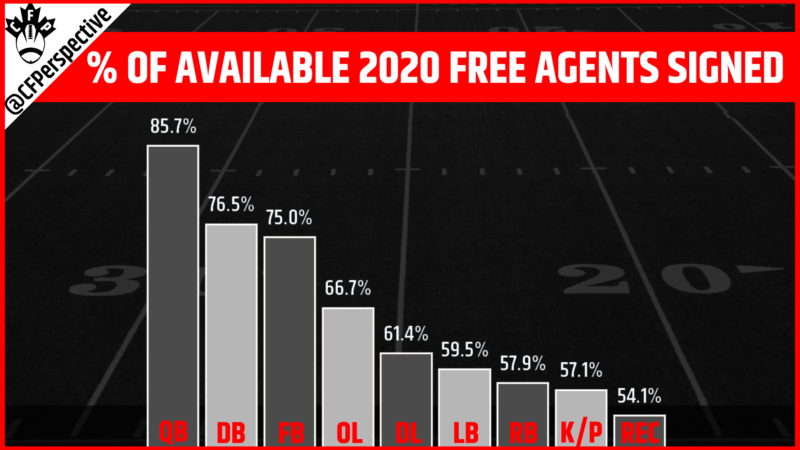 In fact, the receiver group still has the lowest percentage of available free agents to put pen to paper in 2020. That’s ridiculous,  really, when you consider how many big names and game changing players are included in the group at all different levels of the pay scale.

Eventually, Walker will sign, then so too will Naaman Roosevelt and onward down the receiver hierarchy. Everyone will find a home, but the varying approaches of teams and the receivers still in negotiations have defined this year’s edition of the complicated — and always entertaining — dance known as CFL free agency.

Here are some of my highlights from the past two months of player movement.

It HAD to happen. The offensive tackle market was relatively thin and Mathews proved himself over two years in Hamilton to be an elite CFL tackle. That’s exactly what Ed Hervey and Mike Reilly needed.

Casher was really impressive with Calgary in 2019. Seeing BC dive in on him only confirmed how much the Lions knew they needed to upgrade both sides of the line.

The Lions’ 2019 offensive line was the worst positional group in Canadian Football. Hunter Steward was not the problem. As a result, he’s the only returning lineman as this is being written.

Hometown boy returns to solidify one of the Stampeders biggest needs? A homer of the 400-foot variety.

We all knew the Stamps would be in on a kicker with Rob Maver retiring, but Pfeffer? I didn’t see it coming, but let’s see how it plays out.

A former first-round pick, McGough returns home to Alberta where he can quickly become a fan favourite and community ambassador for years to come.

You love to see it. The Alberta Golden Bears product turned a productive and disjointed U Sports career into an increasing role with the Argos. He’s parlayed that into a job in his home province, in a city he knows well.

With Jason Maas gone Trevor Harris will no longer be taking all the short yardage sneaks. Pipkin is the perfect body type for this, but can he be more in a package and can you validate EVER taking Harris off the field in the same way Winnipeg did Nichols for Streveler in 2019?

An achilles injury in 2019 paused Parker’s Edmonton career, but he’s back now and I’m pulling for one of the truly great recent U Sports products to find his fit in head coach Scott Milanovich’s attack.

One of the most dynamic and physically dominant rising receivers in the CFL. If Cody Fajardo is going to improve from 2019 and continue to progress as a quarterback, he and Maas needed Evans.

A former 1st overall pick that played in 33 per cent of available games over three years only to spend 2019 with three different teams and then return to the team that drafted him? Sure.

Everyone loves to write off players at a certain age. Elimimian was an afterthought to many, viewed as too old or slow. His performance in 2019 — 88 tackles and four sacks in 15 games — says otherwise.

Best player on the board stays home? Doesn’t get any better.

An increasingly position-less player in a defence full of flexible skill sets, Antigua could return to his Riders glory year of 2018 if used creatively by defensive coordinator Richie Hall.

He was everywhere at the end of 2019 and will find plenty of work in 2020 after the Bombers secondary took an NFL hit.

It made too much sense not to happen. The only time Dean has surpassed 100 tackles in his CFL career was with Hamilton in 2018. Expect it again in 2020.

We all knew the Ticats wanted another receiver but one of this skill level and fit for O.C. Tommy Condell’s passing attack? It could be the steal of CFLFA 2020.

He can run, he can cover and he brings an attitude that Hamilton fans will fall in love with.

Walker out, Daniels in. Alongside new head coach Ryan Dinwiddie, Daniels leaves Alberta for the first time in his CFL career and could set new metrics for personal pass catching.

Unexpected: Where to begin… The Argos were all over the place on Tuesday, signing players from every corner of the CFL.

He’s an underrated every-down defender with an elite special teams skill set. In his trip up the QEW from Hamilton, Shortill will make noise in Toronto.

All of the fireworks in Ottawa were useless without a face and a name to attach them to. In Arbuckle, the Redblacks believe they have an up-and-coming leader, ready to establish himself as one of the CFL’s best.

I figured Unamba would be on the move, but to Ottawa? New defensive coordinator Mike Benevides’ sales pitch must have been powerful.

LaPolice gets his ‘Ottawa Demski.’ Coombs underperformed in his short Hamilton stint but could play an important role in Ottawa.

One of the CFL’s best interior pass rushers that nobody talks about enough. In choosing to stay in Montreal, Baron could be the heart of the Als’ defence in 2020 after surely being chased by other franchises this week.

We knew Maciocia was in on French Canadians and Carabins alumni, but Tracy? They clearly saw something worth inquiring about and are ready to give the former Ticat a fresh start after a freak injury ended his 2019 season.

In the barrage of Montreal Carabins players going home, you might have missed how good Luke really is. Expect him to be among the top-20 sack leaders in 2020.