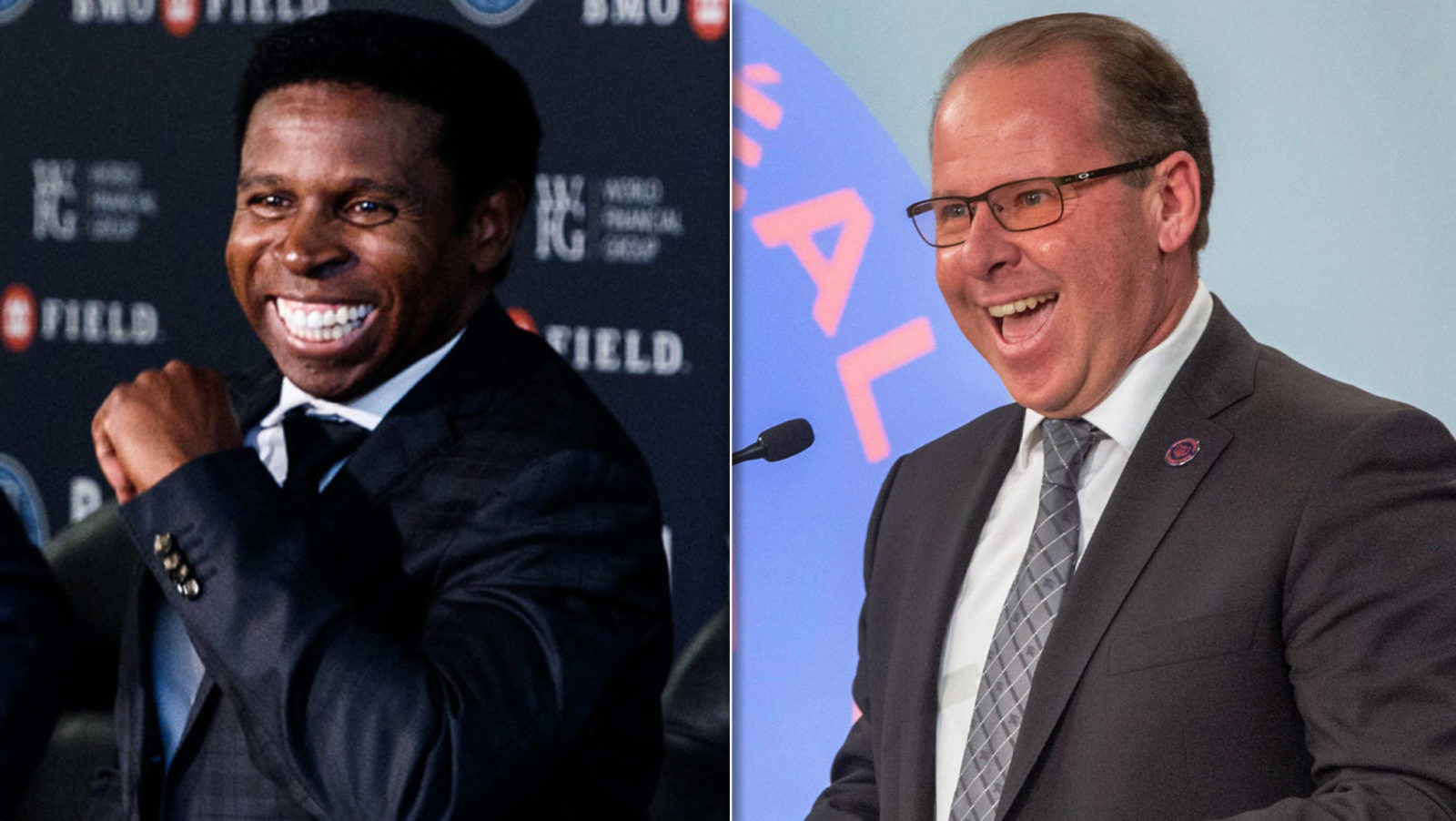 TORONTO — It was a wild opening to free agency on Feb. 11., as we saw dozens of individuals find new homes or return to familiar surroundings.

Some teams were busy while others stood pat during the opening 24 hours of the period. Each team has lost and added bodies for the 2020 season, but who did the best and who has gotten the short end of the stick in the open market so far?

On the latest episode of The Waggle presented by Sport Clips, Davis Sanchez and Donnovan Bennett discuss who the winners and losers were to open up the free agency window.

Episode 198: Come on back to Winnipeg! (Post-FA Special)

EPISODE OVERVIEW: Willie Jefferson has gone back to the ‘Peg, while Derel Walker keep everyone waiting. Davis Sanchez and Donnovan Bennett wrap up the week that was in a special post-free agency episode.

“I think culturally and philosophically, what the Argos have done in free agency is really smart,” Bennett said. “I look at what the Argos have done, who had worse Canadian talent last year than the Argos? Look at what they’ve done in free ageny; no big sexy names. Ackie, Shortill, Brescacin, Natey Adjei, Philip Blake, Fabian Foote, Denzel Radford, Dariusz Bladek.

“Not only are they Canadian, which automatically makes their Canadian talent better, they’re local guys; GTA guys. They went and they said ‘we are taking care of our own and getting lots of Canadian guys, specifically guys that are local products.’”

Heading into free agency, Toronto was pegged to be a team that was going to be busy on day one. They had already taken care of some housekeeping ahead of the big day, signing quarterback Matt Nichols to a three-year deal — that move followed the team coming to terms on an extension with pivot McLeod Bethel-Thompson.

There were needs that the Double Blue needed to address in free agency. Star pass-catcher Derel Walker headed to market, as did Armanti Edwards. Future Hall-of-Famer S.J. Green also requested his release and subsequently headed to the XFL. Additionally, the team released offensive linemen Sean McEwen and Tyler Holmes — both National players who were starters for the team.

They addressed those needs right away. The biggest signing of the day was receiver DaVaris Daniels, who has become a threat in the pass game with both Calgary and Edmonton during his career. 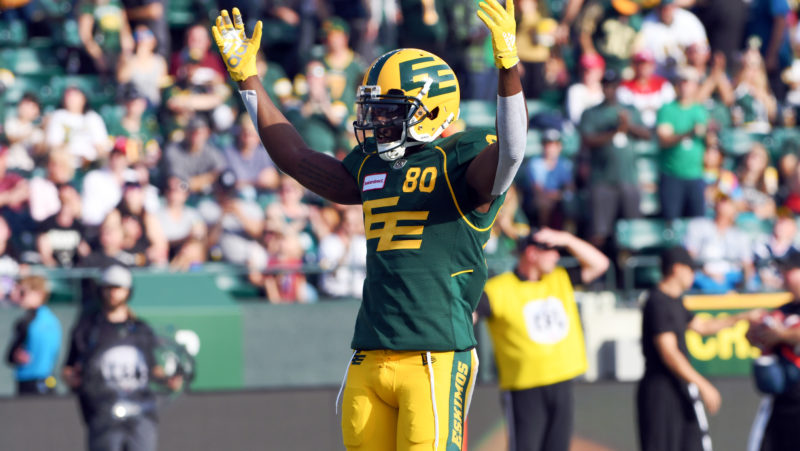 DaVaris Daniels celebrates a touchdown against the Calgary Stampeders. (Esks.com)

More importantly, however, were the additions of Blake and Bladek. The former was the starting right guard for the Saskatchewan Roughriders in 2019 while the latter was his backup.

Blake is a CFL veteran who will help lock down the interior while Bladek looks ready for full-time work in the trenches.

Along with Daniels, the Boatmen added Juwan Brescacin to solidify their receiving corps heading into 2020 — in addition to Natey Adjei, who the team also inked to a deal ahead of free agency.

The Argos have added 13 players so far, with eight of those individuals being National players. They did lose pass-rusher Cleyon Laing to Ottawa, but they brought in Drake Nevis and Craig Roh from Winnipeg. The Argos’ last signing came on Friday when they inked defensive back Arjen Colquhoun to a deal.

“I would take it further and say from a schematic and roster standpoint, they have those ratio-changing guys. Brescacin and Arjen Colquhoun are ratio changers,” Sanchez said. “…you add Chris Ackie at linebacker and just right there with who you’ve signed, those are guys who should start. You’re already locking in guys who can start just from the guys you’ve signed.

“Toronto, because of the free agents they signed, is in a good spot.”

On the other side of the spectrum, there is an East Division team that hasn’t had the easiest go of things to open free agency.

I think Montreal was hit pretty hard this off-season. It’s not that they lost guys, and they could have a plan with guys on their neg list — guys that they want to bring through as well as guys on the practice roster. What hurts about Montreal is not only did they lose a lot of guys and a lot of talent, they lost them to rivals; teams you have to beat next year.”

The Alouettes locked up their most important asset, signing Vernon Adams Jr. to an extension. The team also managed to solidify its front office, bringing in Mario Cecchini to be the new president and Danny Maciocia as general manager.

Maciocia did reveal that the Als were up against the cap ahead of free agency, and they took hits to their roster as a result.

Receiver DeVier Posey and SAM linebacker Patrick Levels were among the biggest departures. Both players stayed in-division, going to the Hamilton Tiger-Cats. 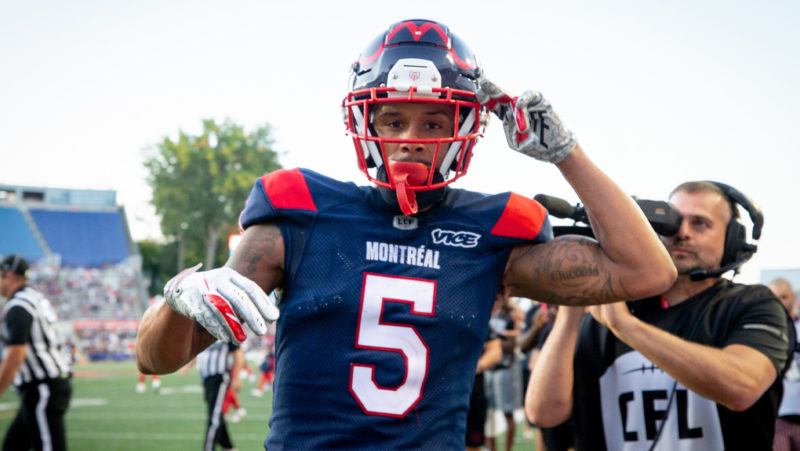 DeVier Posey has moved to a new home, signing a new contract with the Hamilton Tiger-Cats. (Dominick Gravel/Montreal Alouettes)

Ackie and Fabian Foote also left the Als, signing with Toronto. That brings the former Montreal defenders on the Double Blue to four after the team traded for linebacker/safety Bo Lokombo and signed defensive back Tommie Campbell following his release — with three of them serving as starters for the Alouettes for the majority of 2019.

There’s still lots of time between now and the start of the 2020 CFL season. A lot could change over the coming months, and as Sanchez pointed out, while some teams look better or worse on paper, the paper doesn’t take the field.

“The real test when you grade free agency — and you have to, it’s part of what we’re all doing — is taking a look at moves and analyzing and judging opinions,” he said. “If you really want to be accurate with this test, do it on July 1. Because you don’t want to look after the seasons and say ‘well this guy did well so they won free agency or this guy didn’t play well so they lost.’

“Let’s look at the team that you’ve built, because that’s what free agency is about — the team you’re building going into the season.”