VANCOUVER — When you catch the biggest fish available, expectations are naturally going to follow.

For the BC Lions, their 2019 CFL season really began almost exactly a year ago from the moment you begin reading this. Mike Reilly was still Edmonton Eskimos’ property but free agency was looming and there were rumours swirling that Reilly would indeed be headed elsewhere — with the most likely destination being Vancouver.

As those rumours became more serious in nature, BC Lions players began to re-sign, trying — presumptively — to get ahead of the inevitable rush to join a team featuring one of the CFL’s elite quarterbacks.

For the first time since 2002, the BC Lions played football games without Wally Buono overseeing as head coach or general manager, but Reilly made everyone forget about the drastic changes in BC. Buono to first-time Head Coach DeVone Claybrooks? Forget about it, here came a perennial CFL stats stuffing quarterback to replace the tandem of ageing Travis Lulay and downward spiralling Jonathon Jennings.

We were all blinded by the shiny toy, the hype and potential.

The problem is, football doesn’t care for your hype, your potential or your name-brand notoriety. The football gods care about and reward things more simple and unmoving such as good line play, ability to protect the football and in-game adjustments to find victories where they probably shouldn’t exist.

Those omnipresent realities are what sunk the BC Lions in 2019 and left them searching for a new head coach 11 months after hiring their last one.

Unlike the other two non-playoff bound teams of 2019, the BC Lions were not head and shoulders below their opponents.

The belief they were somehow a class below the six playoff-bound teams can be argued in some lacklustre outings, but I believe they were more aptly described as being a step behind, especially early in the season when Reilly and the Lions lost 10 of their first 11 games.

Half of those losses coming by a combined 23 points.

So what was the missing magic and how did BC find itself on the outside looking in from the very start of 2019?

Everything that affected the Lions attack came from an inability to protect Reilly.

An inability — or lack of want — to run the ball early in the season – including a week one game which BC called pass plays 100 percent of the time on second down – led to a vulnerable offensive line being thrown to the wolves.

As a result, the Mike Reilly that BC thought they were paying for was unable to be himself which leaked into all areas of his game. While Reilly put a good face on and did the honourable thing of refusing to lay blame or frustration verbally at the feet of those around him, the numbers don’t lie. 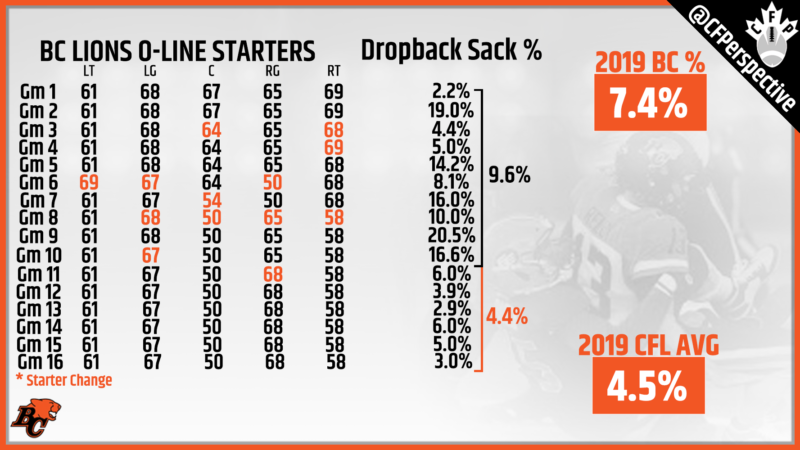 Change after change was required across the offensive line through either injury, performance or transaction. BC went on to feature eight different starting offensive line combinations through Reilly’s first eleven games in Vancouver.

Once the Lions found a group they liked — and one that could stay healthy — their protection rate was actually better than the CFL average, but the damage was done to both the Lions record and Reilly’s body.

As Reilly adapted to his new pressure-filled surroundings, his game evolved. Before the line issues improved, Reilly was the second most conservative quarterback in the entire CFL in downfield passing aggression.

He also couldn’t seem to get out of his own end as the Lions’ defence and special teams were unable to consistently play the kind of complementary football Vancouver football fans desired. As a result, BC led the league in percentage of snaps taken within their own 30-yard-line.

Bryan Burnham solidified he was much more than just a score zone jump ball artist in that area. In 2019 under difficult circumstances, Burnham proved to be equally worthy of defenders’ fear on 1st down in the score zone as he was on second down waggling through his own end zone hoping to make a big play to prevent BC giving up a safety.

Burnham was the engine that drove BC’s offence as Reilly slogged through protection issues and running back John White re-emerged as a legitimate dual-threat back. Shaq Johnson chipped in, Duron Carter made an occasional appearance, but make no mistake, this offence was about Burnham, White, and the man that connects all the dots, Reilly.

Before we take a look forward at how lessons of 2019 might be applied in the crucial next few weeks of roster turnover, take a look at how all the pressure, hits, and losses changed Reilly’s target charts in 2019 versus his previous year with the Eskimos. 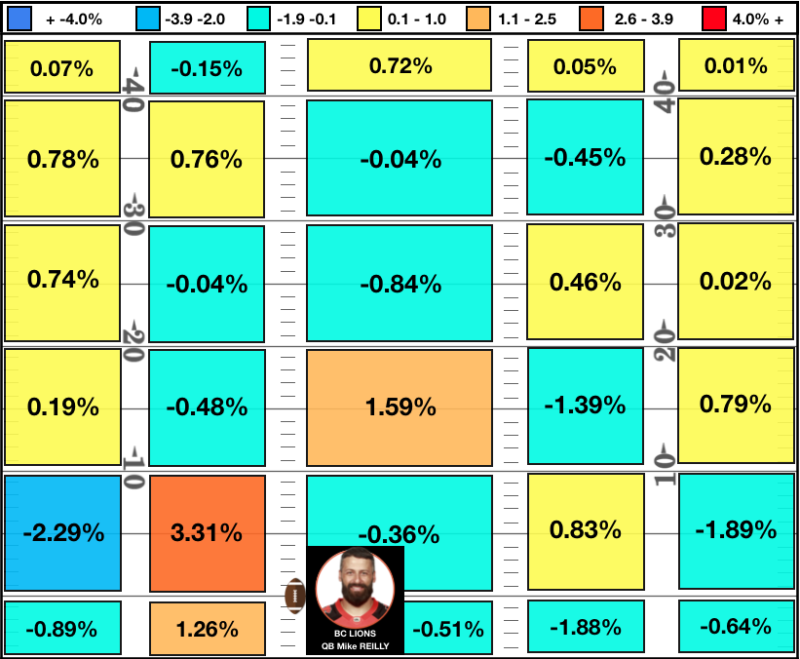 Contrary to most other CFL passer target charts, Reilly worked the fringes in 2019. Not just the sidelines, but the deep sidelines on both sides. The percentage of his attempts in ‘traditionally’ high-volume areas was relatively low (outside numbers under 10 yards downfield), yet his work between the hashes at 10- to 20-yards downfield was well above league average (+1.59% from 2018) as was his tendency in what I call ‘the screen zone’ for right-handed quarterbacks (+3.31%)

Simply put, Reilly can still throw it anywhere on the field. Either through necessity, frustration or some combination of the two. He did that in 2019. Those are his targets, but where did Reilly complete the majority of his passes? 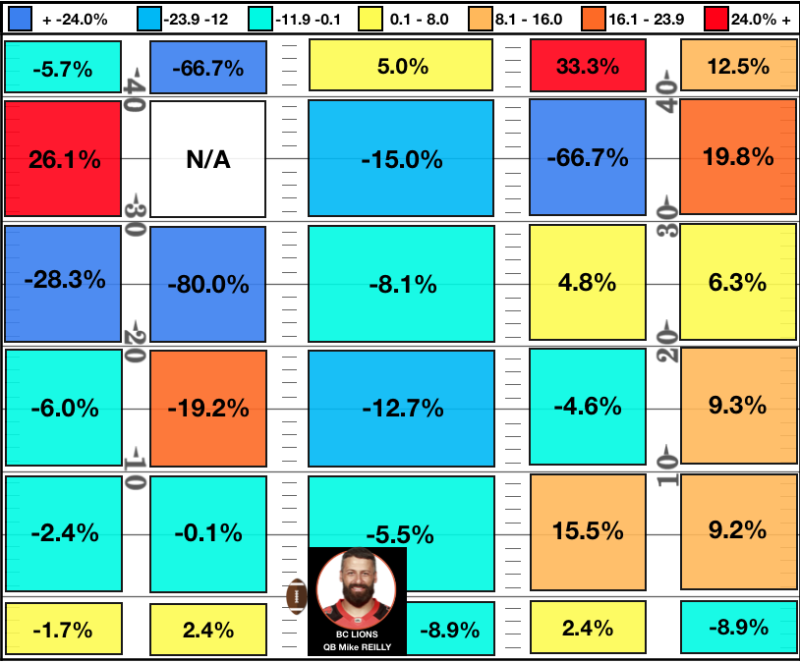 Two things jumped out to me here.

The first is the barren wasteland that became the middle of the field for BC’s passing attack. Again, this could be pressure, scheme, preferences, receiver skill set or any other variable imaginable. But the reality is Reilly’s completion percentage down the heart of the defence changed in a way I could have never predicted or understood until analyzing after the season.

It wasn’t all bad though. With those completions over the middle gone, Reilly and the Lions replaced them with improved completion percentages in nine of the twelve throwing arm (right) side zones.

A high-attempt percentage to these locations is usually indicative of a quarterback constantly under pressure who just takes the first throw in his vision. But a high completion percentage to those spots is not normal for a quarterback pressured as much as Reilly was. Just another statistical anomaly from one of the CFL’s more unique passers. 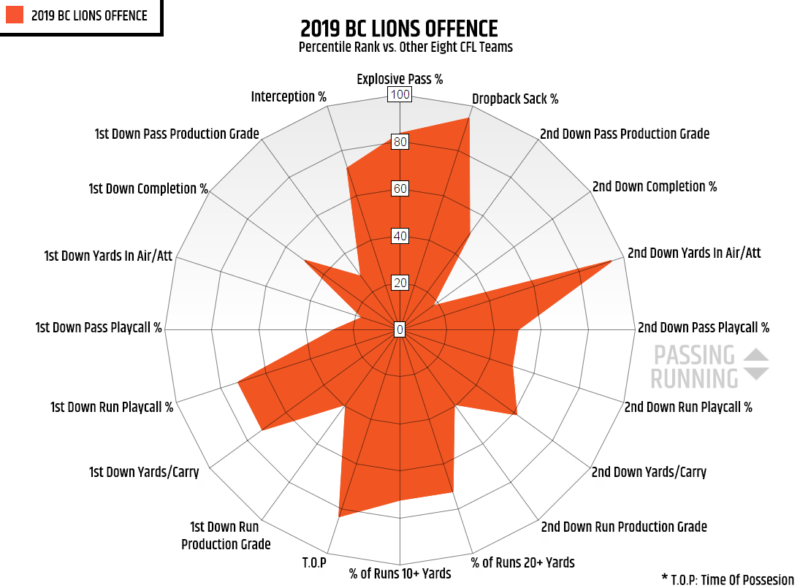 So what did we learn about the Lions upon further review and how can those lessons be applied to the 2020 offseason or kickoff in June?

First and foremost, spend on the offensive line. Without that, the Lions have nothing. If you want Reilly to give you his full value, you need to let him show you what’s possible with a relatively clean pocket more frequently.

Next, mix the run game earlier and more often. I’m not asking for John White to lead the CFL in rushing or BC to install the single-wing offence, but 2019 showed us Reilly’s offence was better when balanced. Paying Reilly what they have and taking the ball out of his hands seems counterintuitive, but it will pay dividends in the long run.

Last, find a true Robin to Bryan Burnham’s Batman. It’s too easy for defences to key on Burnham in the current setup, yet against those odds, he’s been able to continue making eye-popping plays. Can you imagine what’s possible with the defence not tilting his way as often?

All are possibilities, but all will take financial commitment and the ability to recruit and draft efficiently. The next three months will determine the conversation about Reilly’s second season in Vancouver.

Will the hype return? Will the Lions answer the call? Stay tuned.