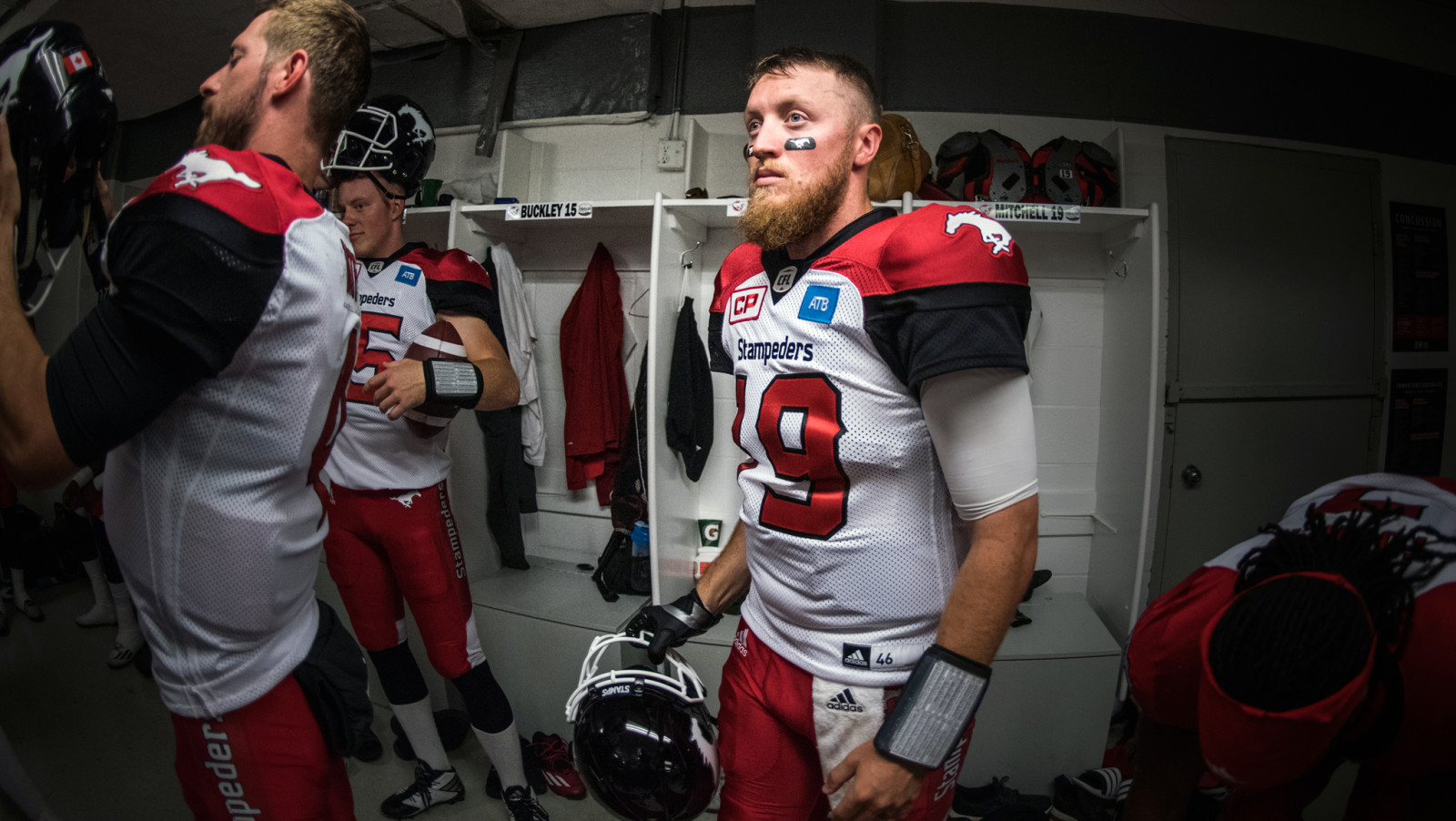 The Toronto Raptors have Drew Tate (more on him later on) and the Calgary Stampeders to thank for the fact that they own the Canadian record for most consecutive wins within a single season by a Canadian professional team (talking about baseball, basketball, football and/or hockey teams here).

I bet you weren’t expecting that to be the opening line of a CFL column!

The best sports story in Toronto has been the defending NBA Champions. With the Leafs underwhelming play and lowered expectations for the Raptors with the departure of Kawhi Leonard, it is no understatement to say this has been one of the most enjoyable teams to follow round these parts.

Their 15-game win streak became national news and knocked off the 2016 Calgary Stampeders off their lofty perch, who previously held the record at 14. Beyond the pride I felt for the local basketball team, the next emotion I felt was embarrassment. I was embarrassed that I forgot that it was the Stampeders who owned the old record.

RELATED
» Relive the entire 2016 season
» Cauz: Why Nichols is the most intriguing storyline in 2020
» Listen: The Waggle’s post-free agency special 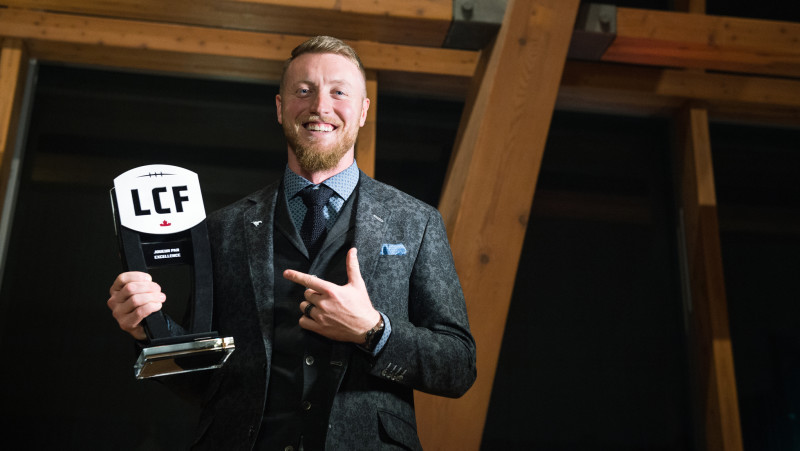 Bo Levi Mitchell poses with his Most Outstanding Player trophy in 2016 (Johany Jutras/CFL.ca)

Because I do my best to avoid personal responsibility, I blame one person for my memory lapse. Of course, I am talking about Henry Burris. The 2016 Calgary Stampeders are one of the greatest teams I ever watched led by a MOP quarterback, a man mountain at running back and a defence filled with just about every notable defensive player every CFL fan has lustfully wanted on their respective team over the past couple off-season free agency periods.

To be fair to John Hufnagel’s greatest creation, it took the greatest single game performance I’ve ever seen by a quarterback (Burris: 461 yards passing and five total touchdowns) to beat the unbeatable. If Calgary had found a way to win in overtime, I believe they would be looked at as possibly the greatest single season team in the modern era of CFL history. Instead, people will focus on 2018 when Calgary finally found themselves rightfully back on top as CFL champions and the 2016 season slowly ebbs away from our collective memory.

The Stampeders would start the year losing their only game with Bo Levi Mitchell in the starting lineup 20-18 to the BC Lions, who finished the year 12-6 in that one crazy magical year for Jonathon Jennings (5,200 passing yards and 27 touchdowns). That game was more about Chris Rainey, who scored on a 73-yard punt return touchdown, a short touchdown run and had a critical second down reception to keep a late-game drive alive. They would not lose again until their final game against Montreal with Mitchell resting and Drew Tate given the starting assignment. As I mentioned off the top, if Mitchell had played in their season finale the odds are Calgary wins and finishes the year with 15 wins. In that alternate universe the Raptors have to share the Canadian win streak record with Calgary.

The 14-game winning streak would start on July 21 in Week 5. Here are some of highlights from their Canadian tour of destruction:

Calgary trailed 34-19 after three quarters. Mitchell, in a critical stretch of the fourth quarter, went nine of 10 for 138 yards and two touchdowns and a completed two point conversion to tie the game at 41 with just a minute left. 2016 All-Star team member defensive back Tommie Campbell would end the game with an overtime interception beating Shawn Gore to the ball.

Remember at this point in 2016 when people thought the Lions could be a legit challenger to Calgary? Yeah, that was cute. Calgary jumped out to a 16-9 halftime lead then shut out the Lions offence in the second half. Jennings was pulled in this game, while soon-to-be 2016 MOP Mitchell went 28-of-38 for 340 yards.

This would be Eskimos’ quarterback Mike Reilly’s worst game of the year throwing for 219 yards with two interceptions. Once again Calgary jumped out to a big lead, this time 18-0 as the offence piled up over 500 yards.

The Labour Day rematch game saw the Eskimos get out on top in impressive fashion on a 104-yard touchdown reception by Derel Walker on the first offensive play from scrimmage for Edmonton. It sure felt like the streak would end this day as the Stamps went into the half trailing 17-3. Instead, Mitchell would throw for over 300+ yards for the ninth time that year (Leading the CFL at that point) and the team would survive a great day from Mike Reilly (35-of-45 passes for 432 yards and two touchdowns). Any time a team can string together this sort of winning streak luck will always play a key role and it did this day for Calgary as Edmonton kicker Sean Whyte missed a 52-yard game winning field goal with four seconds left.

You would think there would have been a letdown for Calgary coming off of back-to-back wins over Edmonton! Nope. Instead, we saw a similar script with Mitchell’s crew scoring 30 points in the first two quarters and would lead 30-14 at the half. Be honest, at the completion of this game did you really think Ottawa would beat this Incredible Hulk of a team in the Grey Cup???

Lady Luck once again was on Calgary’s side. The Stampeders would have a cushy 24-0 at one point but Winnipeg on the strength of a 20-6 fourth quarter run actually led 34-33 with 20 seconds left! There is a reason why Mitchell won the MOP and it was for moments like this as he would complete two passes for 36 yards and Rene Parades hit a 52-yarder to win it. That one had to hurt for the Bombers.

Then came Week 19 and with nothing to play for, Mitchell rested and Montreal won a close one 17-8. This loss really doesn’t matter for a team that won nine of those 14 games by double digits, won back-to-back against Mike Reilly, handed the Lions two of their six losses and Winnipeg two of their seven defeats. The streak ends at 14 but for Calgary it is mission accomplished as they have the top seed in the West and are as healthy as any football team can expect to be at this time of year. The narrative of Calgary’s offence being rusty with Mitchell sitting out in Week 19 was obliterated in the Western Final. Coach Dave Dickenson’s team outscored the Lions by 27 points, outgained them by 158 yards, led 32-0 at the half and basically bullied the Lions for 60 minutes. Who could have seen what was coming just one week later against the 8-9-1 Ottawa REDBLACKS?

The only solace for Calgary was just how dominated the 2016 awards season. As mentioned before Mitchell was named MOP. Running back Jerome Messam won the Most Outstanding Canadian awadrd with over 1,600 total yards from scrimmage running behind Most Outstanding Offensive Lineman Award winner Derek Dennis. Both the offence and defence were littered with All-CFL team members. One guy who did not garner any awards was rookie linebacker Alex Singleton. He would be the league’s top defensive player the following season.

Football can be a cruel game both physically but also for legacies. Ottawa rightfully won the Grey Cup in 2016, that was no fluke but in my mind Calgary was the best team for that year.

The Raptors get the glory nationally for winning 15 games, the REDBLACKS got the glory in the CFL’s final game but Calgary should be remembered for an entire season of absolute blunt dominance.