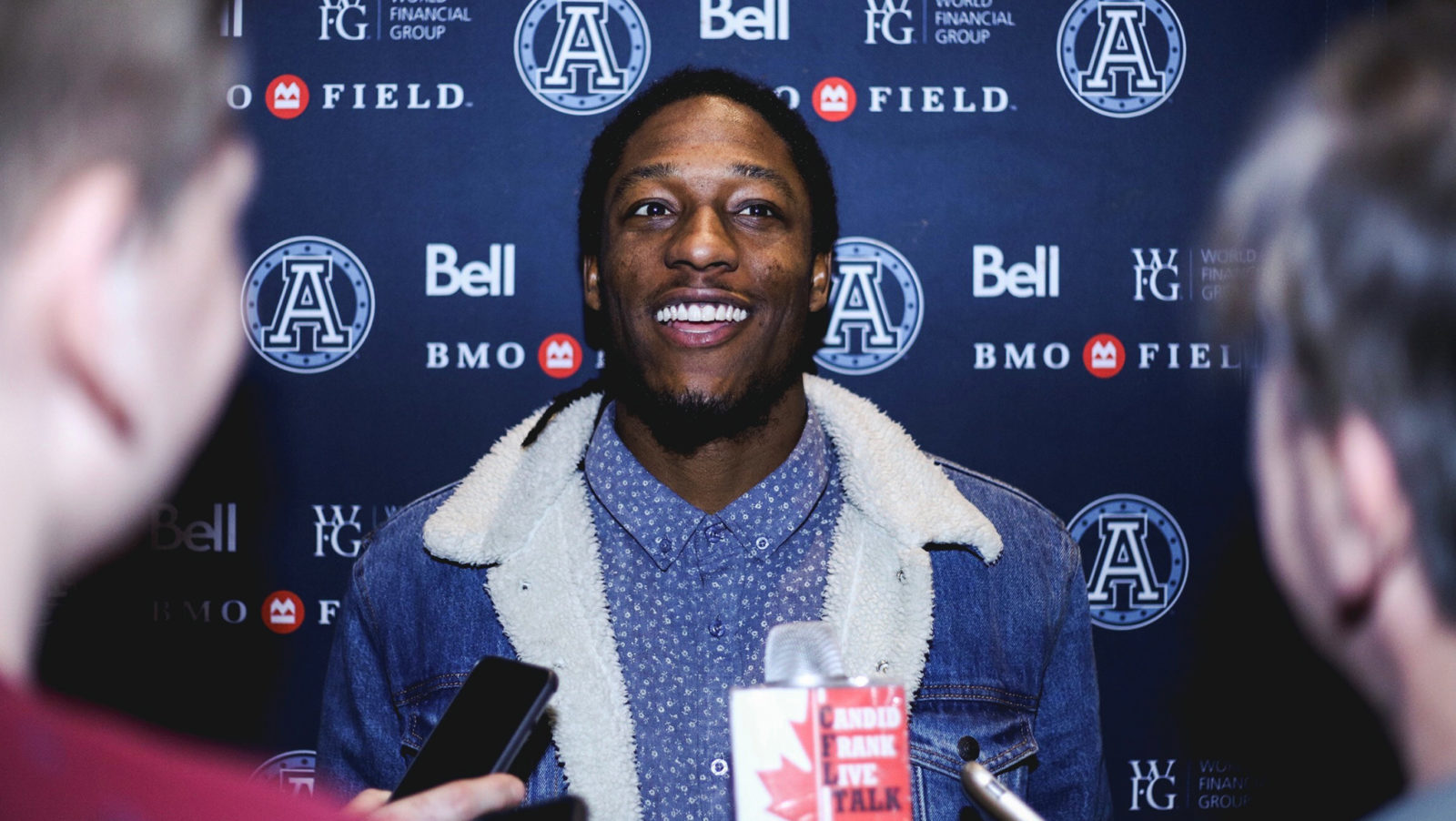 Every year, free agency is full of surprises. Sometimes a marquee player will jump ship and go elsewhere. Sometimes it’s a move that shows its genius as the season rolls along, with the payoff coming as a team takes it to a new level.

The surprise of free agency 2020 has been the signing that (as this is being published on Thursday morning, Feb. 19) hasn’t happened. More than a week into free agency, Derel Walker remains signed.

In that time, we’ve seen a few reports on Walker being pursued by BC and by Winnipeg. A salary cap crunch — a small raise at the top of the cap coinciding with the league minimum increasing — has left a number of players that in years past might have been snagged quickly still looking for a team.

The thought has been that Walker would have to take a pay cut — he was the league’s highest paid non-quarterback in 2019 — to find a home for the 2020 season. While we wait to see what comes next and where Walker lands, let’s take a look at a few possible destinations and some less likely but fun to think about scenarios. To be clear, this is pure speculation. We don’t know what Walker’s priorities are and what he’d be willing to sacrifice to join some of these teams.

On the field, this is one of the best matches for Walker. He’d reunite with Mike Reilly, who set up a then-rookie Walker with the majority of his 1,110 yards in 2015 in Edmonton and helped him hit a career-best 1,589 yards in 2016. A big part of the Esks’ offensive success in that ’16 season was the high end dual threat of receivers they had, in Walker and Adarius Bowman. You could recreate that in Vancouver with Bryan Burnham. Under offensive coordinator Jordan Maksymic, who spent the last four seasons in Edmonton’s offence, it’s safe to expect an offence that would have a similar feel to what Reilly and Walker worked in.

Joining the Grey Cup champs would be another good fit for Walker. The possibility of a one-two punch is there in Winnipeg, with Darvin Adams signing a three-year deal with the Bombers last week. As 3DownNation’s Justin Dunk reported, the Bombers have pitched familiarity and the idea of salary made up through playoff bonuses to Walker. He didn’t get to play with Zach Collaros this past season in Toronto, but they spent time together before Collaros was dealt to Winnipeg at the trade deadline.

The pros and the cons of the situation? First, the Bombers should be very good this year. They’ve retained the majority of their key free agents and the players seem to have fully bought in on coach Mike O’Shea and the culture that he’s helped create. A possible downside? The Bombers’ offence (rightfully) has long catered to Andrew Harris, the top running back in the league. Things may change with Buck Pierce as OC, but Paul LaPolice left a proven formula behind him when he took the REDBLACKS job. You may win a lot in Winnipeg, but your stats likely won’t be gaudy. Adams loves Winnipeg, but it’s worth noting his best CFL season came in 2017, when he had 1,120 yards.

The Argos’ four-win season was not what Walker envisioned when he signed with them last year. He was somehow underused in the offence for much of the season, but still managed to break the 1,000-yard mark. So why go back? Because the Argos are in the process of overhauling everything.

There’s a new GM and a new head coach (and offence). Matt Nichols — who got some work in with Walker in Edmonton in the first half of that 2015 season — is in the equation now. McLeod Bethel-Thompson is back and he gave Walker his two biggest games last year: A 188-yard outburst against Winnipeg in Week 5 and a 203-yard explosion against Hamilton in Week 12. There’s good receiver depth and a defence that has the makings of a tough, physical group. There are still some questions with the team. Their starting running back quickly comes to mind and that head coach is in his first year in that role with a brand-new staff. If you listen to the glass-half-full types — GM Pinball Clemons is definitely one of them — you could be sold on the idea of things heading in the right direction in Toronto.

That said, there are some dream team scenarios in these (highly unlikely) pairings. Imagine Walker in Hamilton with Speedy Banks and DeVier Posey? With Jeremiah Masoli or Dane Evans at QB?

What about in Calgary with Bo Levi Mitchell, Kamar Jorden, Eric Rogers and the young Canadian talent they have at receiver? Or in Saskatchewan, with Cody Fajardo looking downfield for Walker, Shaq Evans and Kyran Moore?

Walker hasn’t played with Trevor Harris before, but he knows Edmonton well. Why not go back to where his CFL career started? He’d have one of the league’s top QBs at his disposal and he’d be playing alongside Greg Ellingson and Ricky Collins Jr. 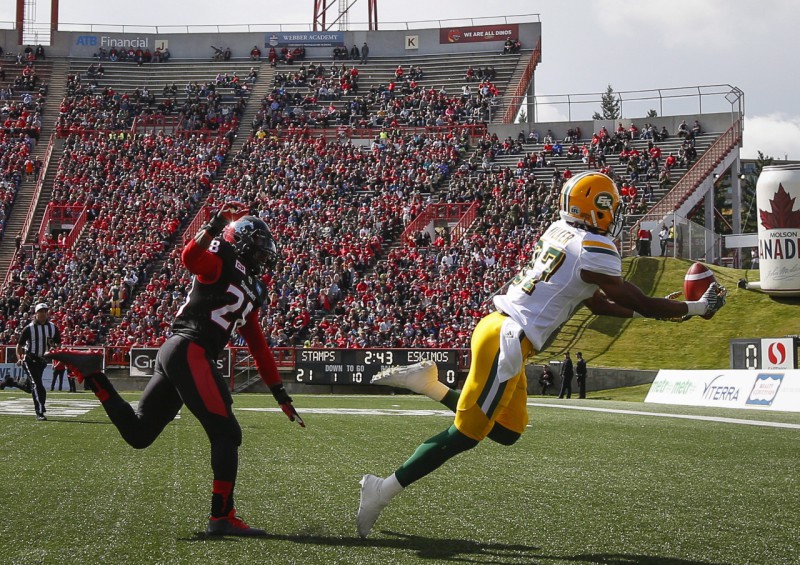 Walker had nothing but success in Edmonton, winning CFL rookie of the year and a Grey Cup in 2015 (Jeff McIntosh/CFL.ca)

Then there’s the cash-strapped but fun-heavy Montreal Alouettes. Picture Vernon Adams Jr. with Walker, Eugene Lewis and Quan Bray as his top targets.

Similar to the Argos, the REDBLACKS are undergoing a lot of change, putting a difficult 2019 behind them. They’ve got a new head coach in Paul LaPolice, a promising QB in Nick Arbuckle and a proven commodity at receiver in Brad Sinopoli. Walker would instantly make the REDBLACKS a better team.

They’re all fun scenarios to think about, but the last six ultimately seem unrealistic without some significant roster juggling. If you were the best/one of the top receivers in the league and someone suggested you take a fraction of what you made the year before to play a physically demanding game, would you do it?

Hopefully Walker’s days as a free agent are dwindling. Wherever he lands, he’ll be a game-changing player in 2020.