“You never know exactly how it’s going to end up, but I think the personnel department did a good job,” Steinauer told Ticats.ca. “We were prepared and it was a joint effort with the coordinators and everybody being involved. We even called the position coaches from time to time.

“So credit the personnel department and video department; it was just a real team effort. The groundwork was really laid early and then it was just seeing how things fell.”

The Tiger-Cats were one of the busier teams once free agency opened on Feb. 11, signing seven individuals to contracts.

2020 FREE AGENCY
» A Summary of the Tiger-Cats’ FA Moves
» O’Leary: Wynn ready to take the next step in Hamilton
» Ferguson: A comprehensive look at FA20
» CFL Free Agent Tracker 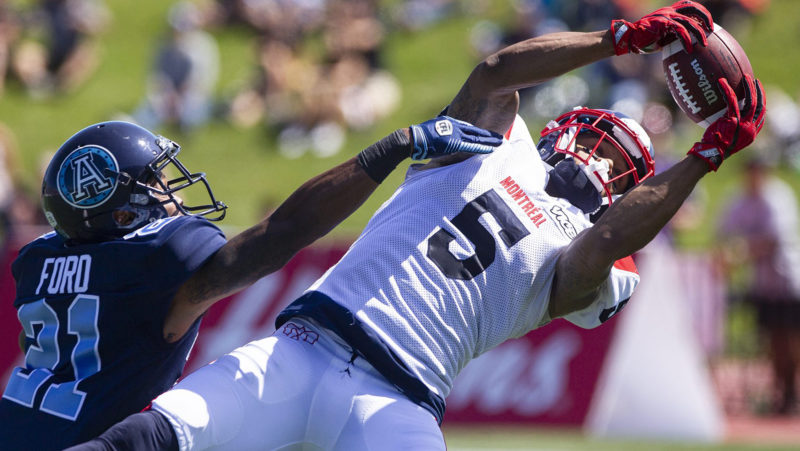 For a team that was looking to fill holes on the offensive end, they accomplished that. Firstly, Hamilton was able to land receiver DeVier Posey to a contract.

Posey played with the Montreal Alouettes in 2019, where he accumulated 780 yards and three touchdowns on 50 catches while appearing in 12 games.

The Ticats were looking to bring in someone to replace Bralon Addison, and they did that with the addition of Posey. However, Steinauer isn’t looking for him to be a carbon copy of Addison for Hamilton.

“We want DeVier to come in and be DeVier,” Steinauer said. “We try not to get caught up in replacing exact skill sets because I think you’re setting the player up and ourselves up for possible dejection. We want him to bring what he brings to the table: competitive nature, hands — he’s done it at the highest level. It’s not like we’re in the dark with DeVier because we have people in our organization that have worked with him before.

“He comes highly recommended and wanted to be here, which was exciting for us. I just look forward to him being himself and not trying to fill anyone else’s shoes.”

The 29-year-old came into the league with the Toronto Argonauts, so he’s no stranger to playing the Tabbies. The veteran pass-catcher is looking forward to playing for his third East Division team in his career while suiting up alongside one of the league’s best squads.

“When you’re a free agent and you’re putting down pros and cons on your board, Hamilton checked all the boxes football-wise,” Posey said. “With the offence and Tommy being the mad scientist I know he is, having the opportunity to play with great offensive players like Don Jackson and Speedy Banks and (Jeremiah) Masoli — I’ve played against him for like 10 years.

“Just being able to strap it up and lace it up, I’m becoming appreciative at this point in my career and I hope I can earn my teammates’ respect with my work ethic and just being who I am.”

Alongside Posey, the Ticats also added 26-year-old rusher Don Jackson. He had a breakout year for the Calgary Stampeders in 2018, putting up 924 rushing yards and three touchdowns in 13 outings. However, he had trouble staying on the field this past season. He appeared in just seven contests for the Stamps in 2019, where he had 246 yards and two majors.

Despite that, his ability to rumble out of the backfield and make defenders miss after the line of scrimmage and catches enticed the Tiger-Cats.

“We were looking for a guy with a skill set that we didn’t feel we had. We feel like we have some really well-rounded back in (Sean Thomas) Erlington, (Jackson) Bennett and Maleek Irons, they bring their own skill sets,” Steinauer said. “But we felt like we were lacking in that department — we felt that way last season — but those players aren’t always available that you’re able to bring across the border to our league. When that player becomes available, we look at is less like a want and more like a need. We looked hard at it and were grateful he was available.

“When we brought him in, we got the sense that he wanted to be a Hamilton Tiger-Cat. We don’t want to force anyone to be here — you either want to be a part of it or you don’t — and it was very apparent that we were going to have a good shot at him.” 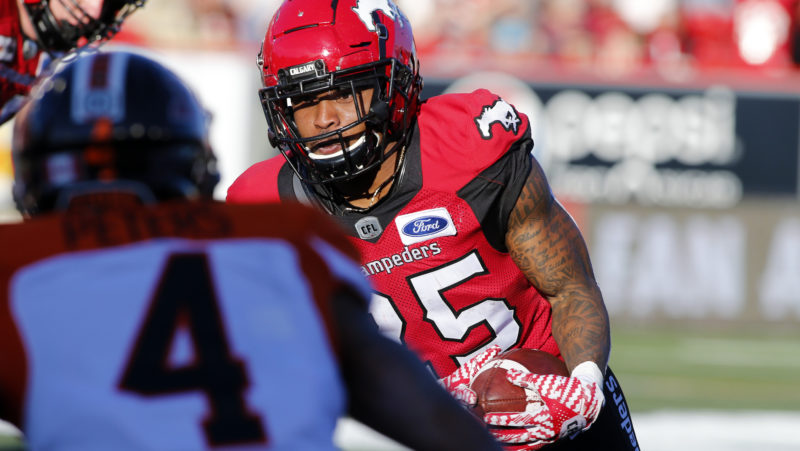 Running back Don Jackson signed a new deal with the Hamilton Tiger-Cats on the opening day of CFL Free Agency. (Larry acDougal )

Hamilton did most of its damage this off-season on the defensive side of the football. They were able to take care of some housekeeping, signing Ja’Gared Davis and Ted Laurent ahead of free agency opening — 2019 standout Dylan Wynn also re-upped with the Black and Gold following the opening of the free agency window.

When it came to landing players on the open market, the Tabbies addressed their second level. They brought back a familiar face, signing linebacker Larry Dean to a deal. The 31-year-old is no stranger to Hamilton, as he was a member of the Ticats for three seasons prior to 2019. He opted to head West and join the Edmonton Eskimos last off-season, and during this past year, he had 86 tackles, three special teams tackles and one sack.

Dean was named an East Division All-Star in 2017 and 2018 while with the Tiger-Cats. The Tifton, Georgia native is sure to bring physicality and veteran leadership to the locker room.

“I can’t really say enough good things about Larry Dean,” Steinauer said. “He’s earned all the praise that people talk about him. He’s a tremendous leader and his play on the field is what people recognize but it’s everything behind the scenes — the man he is — he fits our culture and organization just fine. I think the players that haven’t been around Larry are in for a real treat because he’s just a model of consistency, he cares and he’ll be an integral part of us making a run at this 2020 championship.

Levels, 25, was considered one of the emotional leaders on the Montreal defensive front in 2019. He had a breakout campaign in his first year in the East Division. He suited up for all 18 games with the Als this past season, posting career-highs in tackles (86), sacks (5) and forced fumbles (1). At 25 years old, he’ll compete for the starting SAM linebacker spot with veteran Rico Murray, who started at the position for the Ticats in 2019.

Competition is a word that Steinauer has focused on throughout the free agency process. The Ticats have been making strategic additions to their team, adding depth in the process while also adding starters into the fold. Along with Levels, defensive back Qudarius Ford and Courtney Stephen, as well as linebacker Justin Herdman-Reed, will help push other individuals for starting jobs.

“We like what we saw on tape from Ford and Levels is an accomplished guy who’s looking forward as much as we are to come in and compete in camp and earn a spot,” Steinauer said. “That’s one thing about us, we’re going to put our best 12 out there on each side of the ball and the same with special teams.

“Nobody’s entitled to anything so we’re looking forward to healthy competition in training camp.”

Linebacker Patrick Levels inked a deal with the Tiger-Cats just after the official opening of the Free Agency window. (Dominick Gravel/Montreal Alouettes)

Despite coming up just short of the ultimate goal in 2019, the Tiger-Cats are once again poised to be a powerhouse that features a threatening quarterback tandem, dangerous receivers and a stout defence.

The Hammer has become one of the premier destinations in the league, and now the Tiger-Cats have their eyes firmly set on hoisting the Grey Cup in 2020.

“I think that’s one of the things I’m most proud of, that people want to play here and they talk about the family atmosphere — I think that’s a commonly used term in sports. But it’s about creating a sustainable model and not just saying it but believing it and embodying it daily.

“There’s no magic wand. I take pride in it and we all worked hard at it last off-season throughout the whole organization. I credit everybody for buying into a vision like that.”