TORONTO — Willie Jefferson has become the class of the Canadian Football League when it comes to defensive linemen.

After taking home his first Most Outstanding Defensive Player award and second Grey Cup in 2019, the veteran explored his options in the open market and opted to return to Winnipeg.

Now, the dominant pass-rusher is looking to run it back with the Bombers and make another run at the title in 2020.

In an extra for The Waggle presented by Sport Clips, Davis Sanchez chatted with the 29-year-old about the free-agency process, his choice to return to the Blue and Gold and his expectations for the 2020 season.

Extra: Willie Jefferson on his decision to stay in WPG

EPISODE OVERVIEW: 2019 Defensive Player of the Year, 2019 Grey Cup champion and 2020’s most sought-after free agent Willie Jefferson re-signed with the Bombers for two more seasons. Davis caught up with the superstar defensive end to talk about his decision to stay in Winnipeg.

“I’m feeling good, I’m feeling blessed and happy to be back in Winnipeg for another two years,” Jefferson said. “I’m just ready to put in some work to go back to back.”

You’d have to be living under a rock to not know about the booming impact the defensive lineman brought to the Bombers in 2019.

After signing with the Blue and Gold, Jefferson anchored a defensive line that tormented opposing offences. The 6-foot-7, 248-pounder was the biggest menace of them all. When he wasn’t getting to the quarterback, he was popping balls loose and swatting down passes at the line of scrimmage.

He finished the year with 24 tackles, 12 sacks, an interception and six forced fumbles. That earned him his third West Division and CFL All-Star honours as well as the Most Outstanding Defensive Player award.

Jefferson also two tackles, three sacks and a pair of forced fumbles in a dominant effort by the Bombers to take home the 107th Grey Cup presented by Shaw.

Heading into the off-season, Jefferson was the hottest commodity set to hit the open market. While a reunion with the Bombers was always on the table, Jefferson decided to weigh his options. Alongside his wife, Holly, and daughter, Kelley, headed East, visiting with the Toronto Argonauts and Hamilton Tiger-Cats ahead of free agency.

“It was enjoyable because everyone wants to feel love,” Jefferson said of the experience. “Everybody wants to feel wanted, but to have the opportunity to come back to Canada and visit Toronto and Hamilton, they were two very nice places that had a lot going on in the city. But to have my family with me throughout this whole process and being able to show them what goes into being a top guy that everybody wants.

“At the end of the day, what really mattered was family and what team was willing to do the most for you to be happy and successful.”

Home was truly where the heart was for the veteran pass-rusher, as he returned to Winnipeg on a two-year contract the day before free agency. 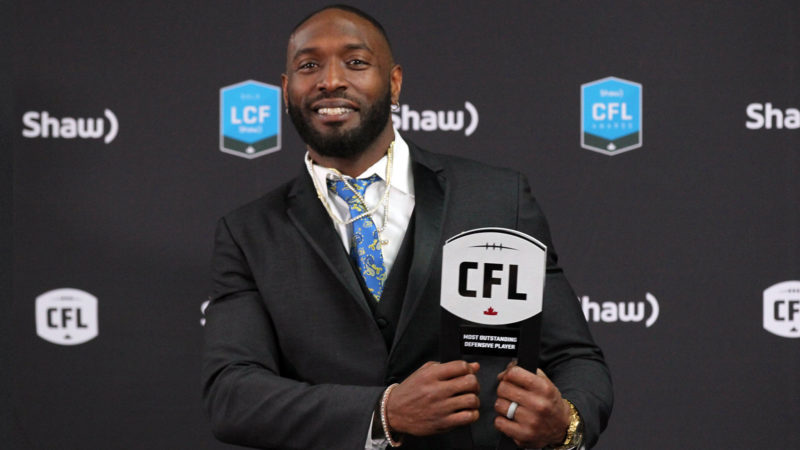 Winnipeg has taken care of some in-house re-signings as well as adding some bodies through free agency — with Jefferson being the biggest deal of them all.

They re-signed pass-catcher Darvin Adams as well as quarterback Zach Collaros. On the defensive side of the ball, they added defensive back Josh Johnson as well as linebacker Tobi Antigha and Micah Awe in the open market.

Johnson has proven himself to be one of the most reliable defensive backs in the league, as he hovered all over the secondary for the Edmonton Eskimos in 2019, playing both field and boundary corner as well as halfback. His three-interception outing in the Eastern Semi-Final against Montreal capped a solid season with the Green and Gold.

The Purdue product will help solidify a Winnipeg secondary that was without both Winston Rose and Marcus Sayles due to NFL opportunities.

Antigha is another up-and-coming defender who’s played in the trenches and in the second level during his time in the CFL. The 26-year-old has put up five interceptions over the previous two years.

Awe is a no-nonsense linebacker who flies to the ball and blows up plays. He played the MIKE linebacker spot for the Argos in 2019, however, with veteran Adam Bighill already assuming that spot, the 26-year-old will still be making a big impact regardless of where he lines up in the Bombers’ front seven.

“I think we’ve made a couple of good moves already in free agency and before free agency to make that vision a lot clearer,” Jefferson said. “Bringing back the majority of the offensive line, bringing back Darvin (Adams), who’s a leader of the receiving core; bringing back Zach (Collaros) and having a gunslinger who’s mobile to move out of the pocket but also have the possibility of throwing the ball down the field.

“Picking up Josh Johnson to pick up some slack from letting Sayles go, bringing back Nick Taylor, bringing me back. Big (Bighill) is still here and Jackson (Jeffcoat) to solidify our front seven, cause havoc and get after the quarterback and make some of these receivers and running backs feel us on the defensive side of the ball.

Now that the outlook for the roster is becoming clearer for the Bombers heading into the 2020 season, Jefferson and his teammates will be trying to avoid complacency while trying to bring another Grey Cup to Winnipeg.

“One of the things we’re going to have to get over is that we’ve won it one time,” Jefferson said. “We did that so that’s old news going into the new season and there’s going to be a lot of people coming for what we have and what we want to get when it comes to the 2020 season.

“That season is over, the drought is over in Winnipeg and we brought the cup back to Winnipeg after 29 years and it’s time to bring it back one more time.”