It’s Friday night in the Wheat City and Mark Wetick and his dad Ray have settled in to watch the Brandon Wheat Kings face off against the Edmonton Oil Kings at a raucous Westoba Place.

The night turns out to be a special one for the Weticks and the Wheaties – who knock off their Alberta rivals 5-2 – because the Winnipeg Blue Bombers are being honoured for their 2019 Grey Cup championship.

Offensive linemen Stanley Bryant and Pat Neufeld, Buzz and Boomer and the Grey Cup itself are in the rink and the joint is buzzing from puck drop to the final horn. There is the standard ceremonial opening face-off, with Bryant and Neufeld signing autographs and posing for photos for a long line of fans following the first period and then throwing mini footballs into the crowd during the second intermission.

“This is so awesome,” said Mark Wetick, who is originally from Ethelbert, just north of Dauphin, not long after posing for photos with Bryant and Neufeld. “I think this could also help the Bombers pick up some fans who want to come to the games randomly or even new season ticket holders.

“The name is the ‘Winnipeg Blue Bombers’ but they represent all of Manitoba. Sure, some people have hopped on the bandwagon recently, but there are a lot more who are invested with this team now, more than after past Grey Cup wins.” 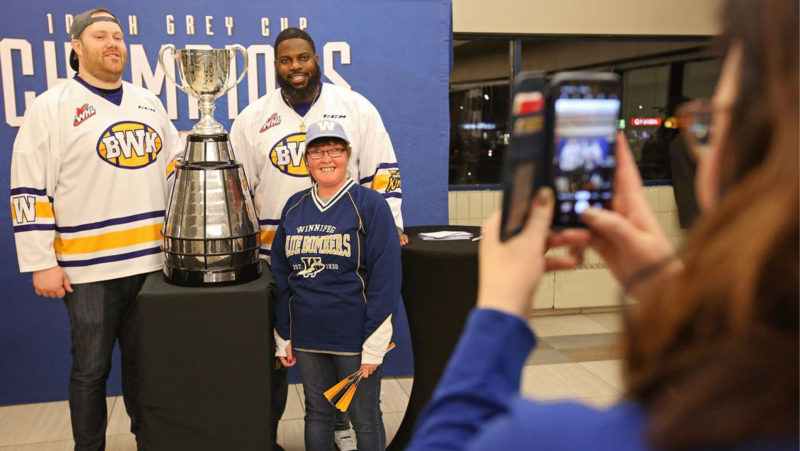 “I can still remember turning on the transistor radio when they beat Hamilton during those glory years in the late 1950s and early 60s,” added Ray Wetick. “An event like this where the Grey Cup comes out here is so important, I think, especially for the younger fans. It’s not every day they get to see the Grey Cup up close like this.”

During the four-day stop in Brandon and as part of the Manitoba Grey Cup tour presented by Princess Auto, the players and the iconic trophy would also visit City Hall, Crocus Plains, Vincent Massey and Neelin High Schools as well as the Bombers Pop-Up Shop at the Shoppers Mall.

Later Friday night after the Wheat Kings game, the Grey Cup was paraded around to a couple of local establishments where fans again swarmed the players and the trophy for photos and autographs. The Manitoba Grey Cup Tour has taken the trophy all over Winnipeg and the rest of the province, from Thompson, Flin Flon, The Pas, Kenora, Ont. and with still more stops planned.

“To me, these visits are absolutely amazing,” said Marni Cramer, a Bombers season ticket holder in the 1980s and now currently in a 14-year-run of support that dates back to 2006. “I drive into Winnipeg for every game and go to two away games a year. But for them to come to me and show they are thankful that we support them… I mean, you couldn’t ask for anything more.” 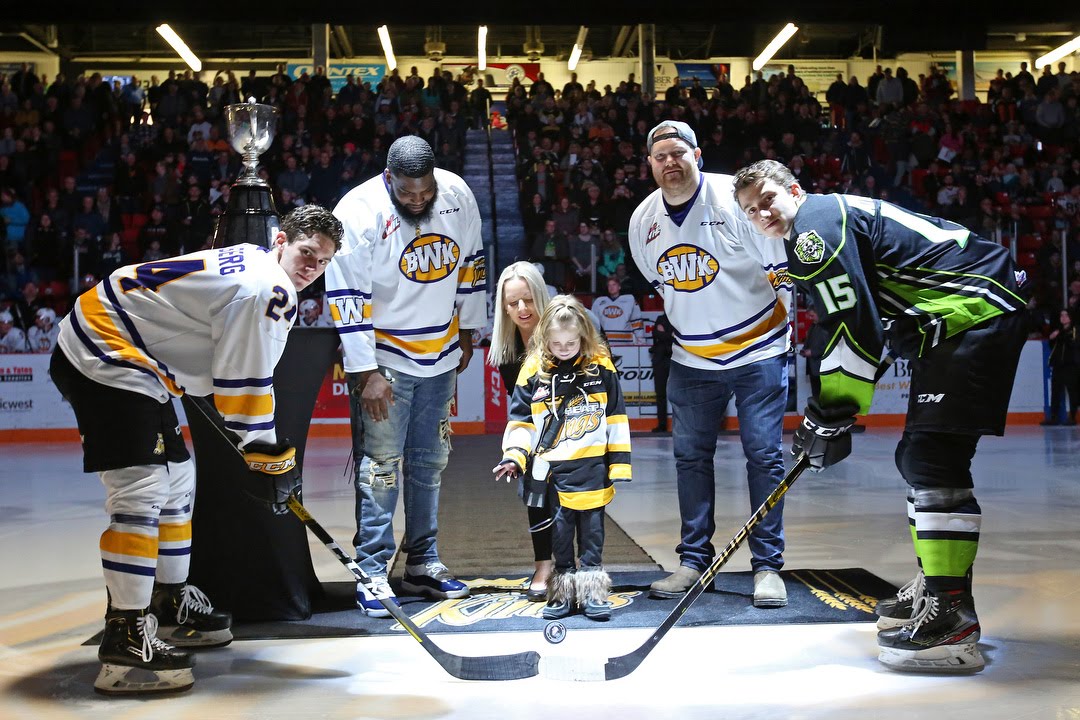 The trip to Brandon this past weekend helped re-establish the Bombers brand in Westman, where there are admittedly a lot of supporters for that other Canadian Football League club just to the West.

Ending the Grey Cup drought last November obviously makes that an easier sell, but the growth of Bomber fan support in the western part of this province has been evident for the last few years.

“I had no idea how many season ticket holders there were in Brandon until the event on Thursday,” said Cramer. “I also didn’t know how many fans were out here until they started making those Bombers yard signs last year. You see that ugly green flag come out once in a while, but when those lawn signs came out you would drive down the street and see them everywhere.

“You add that to the Bombers coming out here, going to the hockey game, visiting the high schools – all that stuff – there’s a reaction from fans that is ‘Wow, they do care about us out here. Maybe I will go to more games now.’”

The Grey Cup tour allows fans to mingle with players like Neufeld, Bryant, John Rush and Thomas Miles – who visited Thompson, The Pas and Flin Flon earlier this month. But often it’s the iconic Grey Cup itself which draws the most attention.

“I’m old enough that I remember four Grey Cup wins and I’ve seen the cup before, but this is the first time I’ve actually seen the trophy itself after we won it,” said Cramer. “It’s something I will never forget. Ever.”