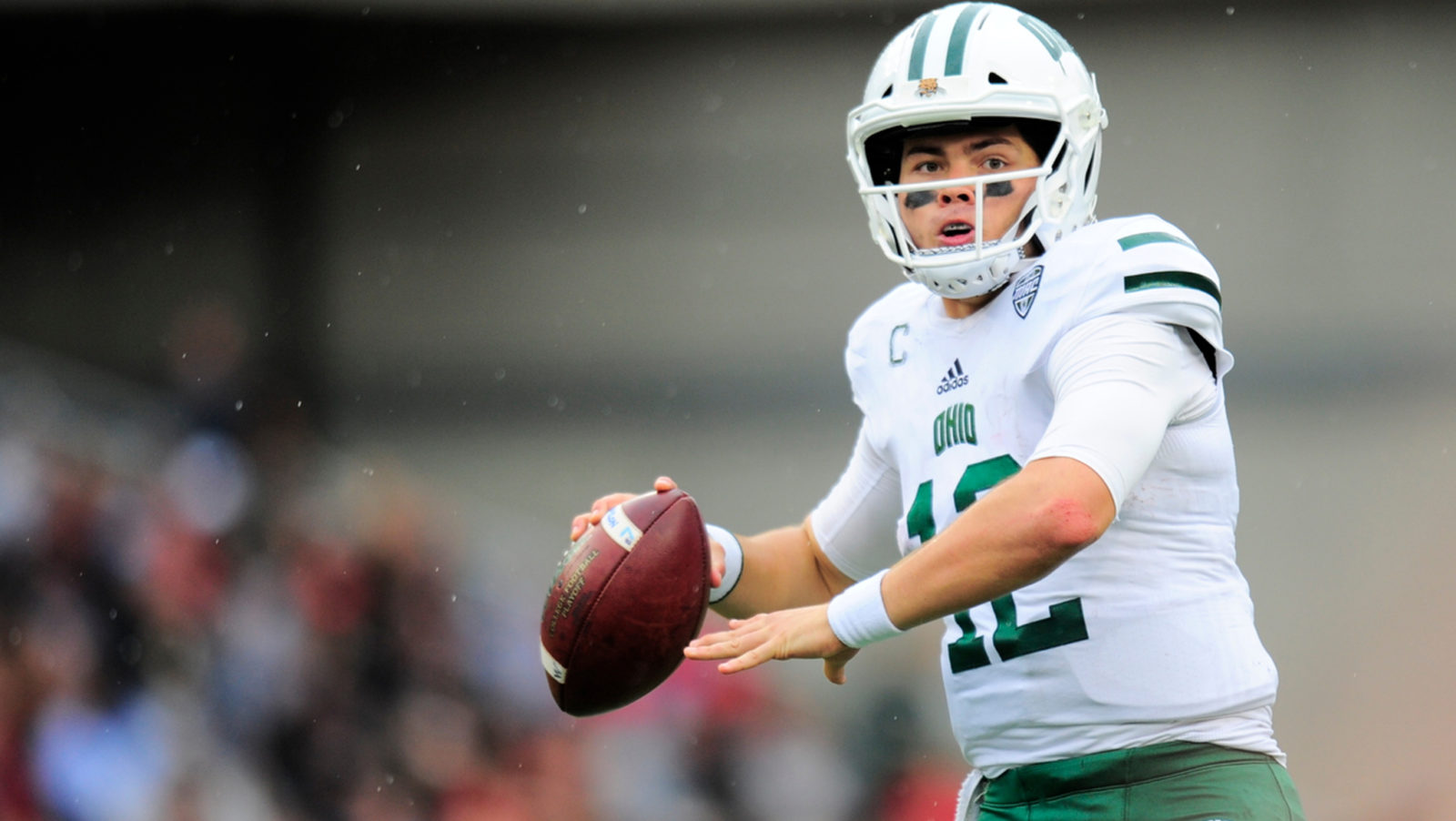 Every year after CFL free agency, my attention fully turns towards the CFL Combine and draft. It’s a wonderful way to shine light on the best nationals and now global players that have worked so hard to earn a chance to play in the league.

I love the combine, probably too much considering how little it means in comparison to actual football, but I love the insanity of it all. The poking and prodding, the pressure and memorable moments, especially when the pads go on as the grand finale to a weekend of fireworks.

The peak of this elaborate annual cow herding experiment is the hand measurement, specifically for quarterbacks.

Plain and simple, it serves absolutely no purpose, but that doesn’t stop me from getting excited to find out which of the passers being examined might have a perceived palm advantage for no other motive than to give me an easy laugh because rarely — if ever — do the measurements make any sense. 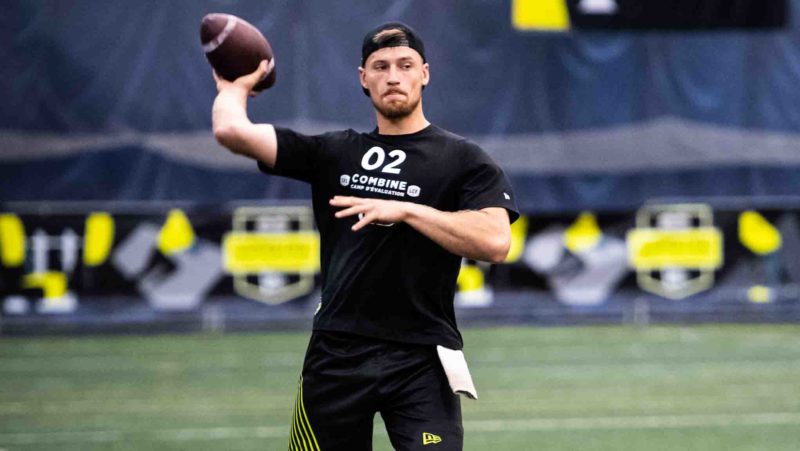 Quarterback Michael O’Connor throws the ball around ahead of the 2019 CFL Combine in Toronto, Ont. (Johany Jutras/CFL.ca)

In general terms, quarterbacks are supposed to have hands at or above 9.25 inches from the tip of their pinky to the tip of their thumb. The archaic belief is that this measurement will tell evaluators how likely a quarterback is to become the next Ricky Ray or Henry Burris.

Where did this insane belief that the size of one’s hand could actually tell us anything about on-field success?

While it likely reaches back far beyond our generation of football, many believe it came from Green Bay Packers scouts attempting to take credit for Brett Favre’s massive mitts causing his mastery of a cold, wet and snowy Lambeau Field football in his prime — with massive pump fakes and ball wizardry that rarely caused a fumble.

In reality, ESPN recently conducted a study of quarterback hand sizes and determined that there is literally zero correlation between fumble rate per game and Quarterback Rating in the NFL as tied to hand size measurement. In fact, those with smaller hands often rated better in these metrics.

But what about the CFL passers? I have hand measurement data for 46 quarterbacks dating back to 2001 when the CFL Combine data became electronically standardized.

These names include Vanier Cup winners, Hec Crieghton trophy nominees, leaders of men who will forever be remembered as stars of iconic teams. But what about their hand size?

If you thought that seemed ridiculous, IT IS!

All of it is, but that doesn’t mean we can’t have some fun with it. 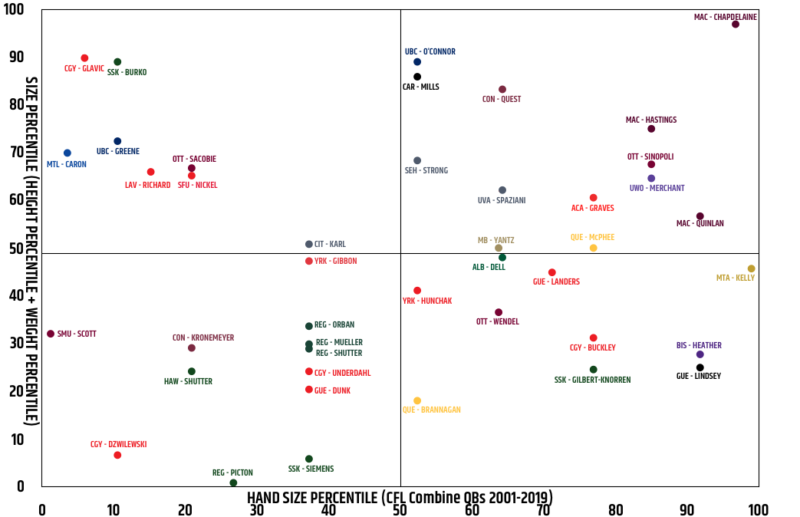 First and foremost, I would like all of us to give Ben Champdelaine a standing ovation for dominating this research in a way I never thought possible. I’m sure this recognition ranks right up there with the time Ben helped McMaster to the school’s first-ever Yates Cup championship in 2000 and finishing his varsity career as the all-time leading passer in U Sports.

At the exact opposite end of the hand and prototypical body size spectrum is another Hec Creighton award winner in Noah Picton. The 2015 UBC Thunderbird Vanier Cup champion and current Argos QB Michael O’Connor posted the fourth-largest hand size in CFL Combine history while 2009 Vanier Cup champion from Queen’s Danny Brannagan has the fourth-smallest hand ever measured.

The results are all over the place and the range of hand size gets even more jaw-dropping when looking at the top and bottom five hand measurements at the CFL Combine, regardless of position.

Again, none of this matters. So why do we care? Why does the measurement still occur annually?

Selfishly, I hope it never changes, as it’s a humorous anecdote that can lighten the data-driven drag that sometimes is combine evaluation. But what this all really speaks to for me is how we perceive our athletes.

The need for large hands in a sport — and even certain positions — not requiring them says more about our social norms and perception of others than understanding of facts.

We want athletes to be bigger, faster and stronger in every way. We love watching the monstrous men that call the CFL home do battle because they possess a superhuman cartoonish figure that we often can’t and don’t want to relate to because we like our athletes to be special and different from us.

The 2020 CFL Combine circuit gets underway March 12th when the Ontario regional takes place. That showcase will feature University of Toronto QB Clay Sequeira, who set the OUA on fire last fall.

At the Western regional, Josiah Joseph of Calgary and Brad Launhardt from Alberta will step into the hand measurement ring before Mount Allison’s Julian Wytinck tries to have the best 2020 mark at the Eastern Regional.

Then, the big show. The national combine which will prominently feature 2019 Vanier Cup-winning QB Adam Sinagra of the Calgary Dinos, who was ranked 14th in the December Central Scouting Bureau rankings. That lands him 11 spots behind fellow Canadian passer Nathan Rourke of Ohio University, who will chase NFL aspirations long before testing the CFL market — but that won’t stop him from being drafted on April 30th. 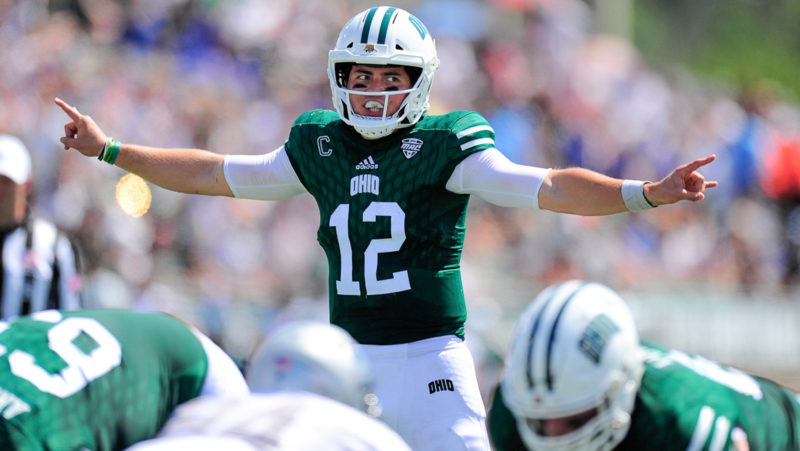 Neither will hand size because anyone talented to be invited to a CFL Combine didn’t get there based on thumb-to-pinky ability.

So the next time someone tries to tell you about a quarterback that teams should avoid because you heard a rumour about a meaningless measurable, take a sip of your coffee, ask if they know what Russ Jackson’s hand size was, wink and walk away.