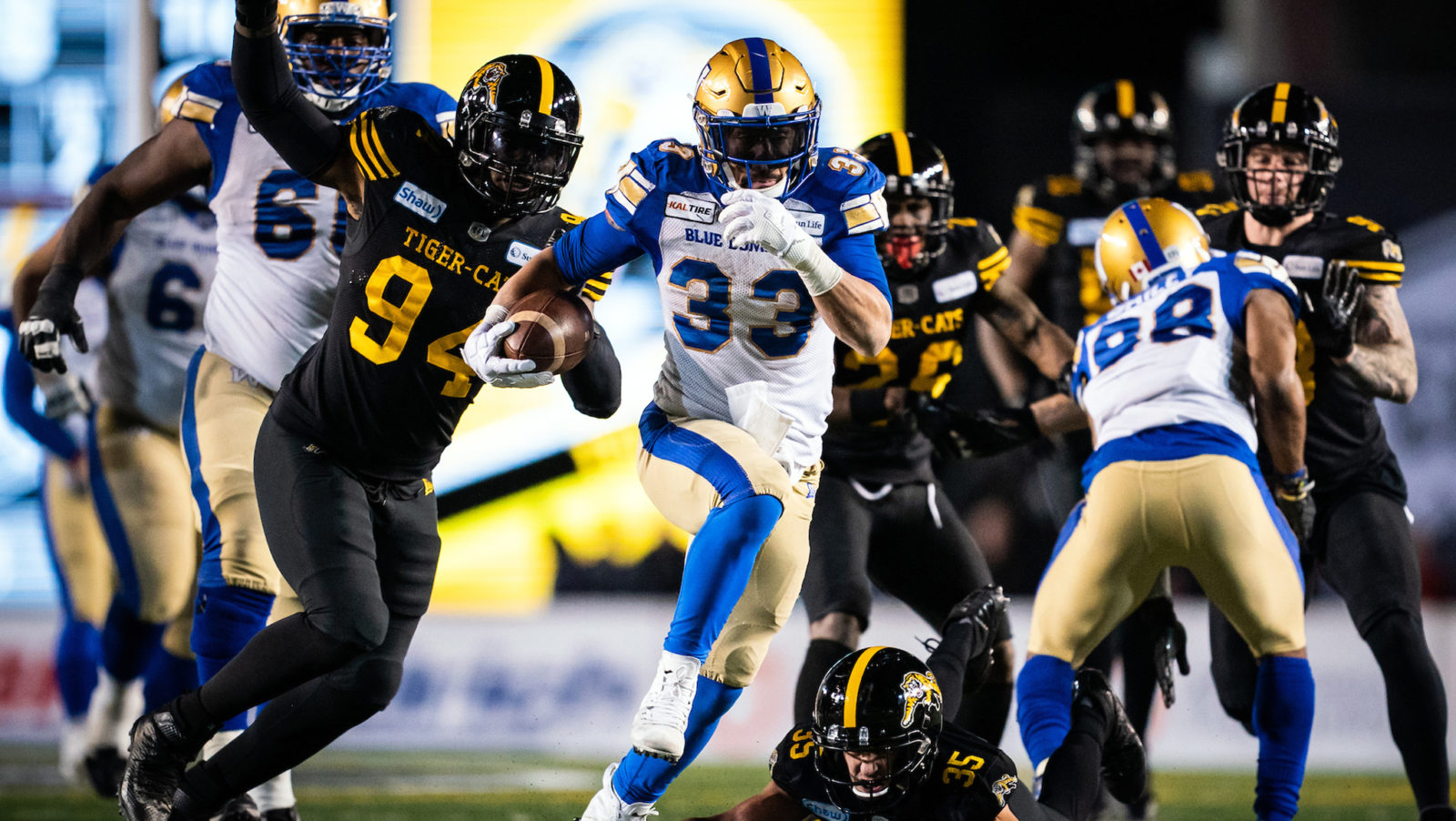 In my sports world, the concept of a “Measuring Stick” game exists. I know we’re living in a far more analytical world when it comes to how we watch and consume our sports, and for the most part, that’s absolutely positive.

It’s always a good thing when we have more information about what we’re watching. However, one of the unintended consequences of this more rational approach dismissing some of the old school narratives like a good old fashioned statement game. I’m sorry, but I don’t want to live in some sort of sports nihilistic world where we put so little stock in the regular season.

I was thinking about this concept while watching the Milwaukee Bucks take on the Toronto Raptors on Tuesday night in what I believed was a measuring stick game. It made me wonder what the best example of that sort of game in 2019 was and which games this season we can affix those titles to. 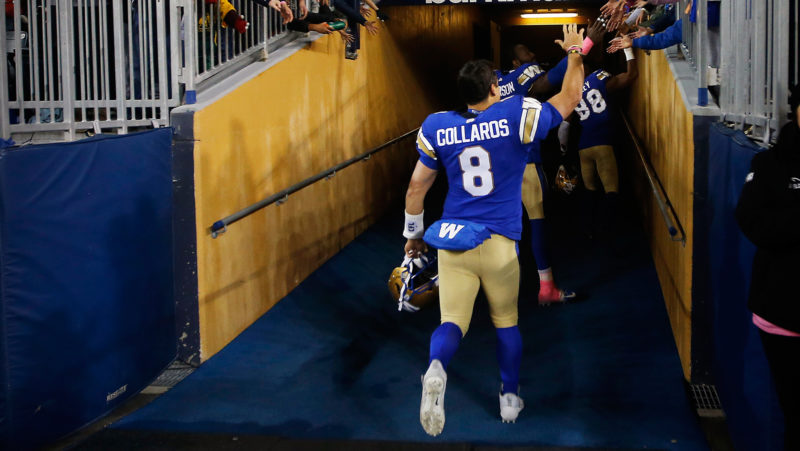 Winnipeg Blue Bombers quarterback Zach Collaros high-fives fans after leading the team to a victory over the Calgary Stampeders. (The Canadian Press)

First, let’s go back to last year. If I could pick one game that most qualifies as a measuring stick game, I would go with the Winnipeg Blue Bombers’ Week 20 win over the Calgary Stampeders. They’d lost to Calgary the previous week and even though the series was split at a game apiece, this was a big game for Winnipeg — who had lost four of their last five and were eliminated by Bo Levi Mitchell in the previous post-season.

What better way to prove to yourselves and the entire league that you belong than by beating Calgary in your season finale? Then there was Zach Collaros, who hadn’t taken a snap since Week 1 and was plying his trade for his third team since the start of the campaign. He had to learn a completely new offensive scheme while transitioning to his new life in Winnipeg. As a quarterback, is there a higher validation that you still can help a team win than a last-minute comeback victory over the Stamps?

All the writers — with the exception of Pat Steinberg — picked Calgary to win this game. Two weeks later, the Bombers strolled into Calgary, came back from a 14-8 halftime deficit and shut out Mitchell and the Stamps’ offence in the second half, winning 35-14.

Now, did the DNA from that Week 20 win play a part in the playoff victory? Obviously I can’t say for sure but so much of sports is about confidence, and Winnipeg had to be feeling good about their chances against a foe that they had recently bested.

So what are some potential measuring stick games for the upcoming season? Here are five to keep an eye on:

Winnipeg Blue Bombers running back Andrew Harris flies the W while leading the team out for the 107th Grey Cup presented by Shaw. (The Canadian Press)

Let’s get the Captain Obvious pick out of the way with the 2019 Grey Cup re-match to conclude the opening week of the season.

You have Collaros on one side, wanting to prove that the Bombers made the right choice picking him over Matt Nichols. On a more personal level, it’s Collaros returning to Tim Hortons Field and playing in front of all those fans who used to reverently root for him to succeed. This is a double measuring stick game, as Hamilton will want to prove that what happened in the championship game was a fluke.

They were dominated in Calgary against Mike O’Shea’s squad so what better way for Hamilton to measure themselves up against not only Winnipeg but also the brilliant 2019 version of themselves than with a win?

Week 4: BC at Saskatchewan

It still amazes me that the Lions landed a distant seventh in offensive points scored and were second last in yards gained despite having the services of Mike Reilly for 16 games.

The 2019 season resulted in a new head coach in Rick Campbell and a new offensive coordinator in Jordan Maksymic. Will all the changes and new additions — namely Dominque Rhymes — turn around the Lions’ attack?

As of this cold February night, I have no idea. But I bet we all will have a clearer answer after they travel to Mosaic Stadium and face the league’s best defence from 2019. You want to measure where your offence is? Let’s see what it does against the Roughriders.

Sticking with the “new offence” theme, the REDBLACKS were dreadful on that side of the ball last season. I bet coach Campbell hugs Reilly extra hard every day in practice when he thinks back to 2019.

2020 is a new year with a new quarterback in Nick Arbuckle and the offensively-minded Paul LaPolice taking over for Campbell. For Arbuckle, he’s going to want to prove that his impressive season stepping in for an injured Bo Levi Mitchell was more than just him benefitting from the Calgary infrastructure.

This matchup against the Tiger-Cats will represent his fifth game as Ottawa’s starting quarterback, and he’ll face the best defence in the East, which held onto its big pieces while adding Patrick Levels and Larry Dean. Alright, Mr. Arbuckle you got paid, and deservedly so. Now, let’s see how you measure up against the Eastern champs.

Speaking of Bo Levi Mitchell, don’t we all want to see how he rebounds for an “off” year by his own impressive standards?

Mitchell is coming off of off-season shoulder surgery and 2019 represented the fewest amount of games he has played (11) since being named the team’s starter back in 2014. Not to be redundant and use the Roughriders again, but can you think of a better defence for a quarterback to assess their overall play against than this one?

Also, after his first-ever injury-marred season, I’m curious how Mitchell will be holding up so late in the season.

I know at this point you’re thinking “isn’t this more of a ‘revenge’ game than a ‘measuring stick’ game?”

I get where you are coming from, and revenge will certainly be coursing through Matt Nichols as me makes his return to Winnipeg. But when you look at the bigger picture, this could represent a very important game for the Argonauts.

The Double Blue is onto its third coach in as many years after back-to-back four-win seasons. They brought in ‘Pinball’ Clemons as their new general manager and, at last count, they have close to 20 new free agents. They should be much improved and this is the time of the season where the playoff bubble teams make their move in either direction.

Toronto, you want to distance yourself from the last two years? Well, I would say a road win against the defending Grey Cup champions with Nichols sticking it to his former team is a pretty good step in the right direction.