Harris set to bounce back from ‘humbling’ 2019

Harris set to bounce back from ‘humbling’ 2019

Heading into his second season with the Edmonton Eskimos, quarterback Trevor Harris is now being looked at as the next great quarterback for the Green and Gold.

With names like Warren Moon and Ricky Ray lining up under centre for the franchise previously, Harris is trying to follow in their footsteps and bring a championship back to Edmonton in the near future.

“To be even in the same breath in the same uniform and being in the same position that you know Warren Moon and Ricky Ray are guys that I look at, I was with Ricky Ray for four years in Toronto, he’s a guy that I admire greatly,” Harris said. “The fact that you’re able to kind of fill the shoes that they have, at some point is it’s humbling, it’s an honour, it’s a privilege and it’s something that I’ll never take for granted.” 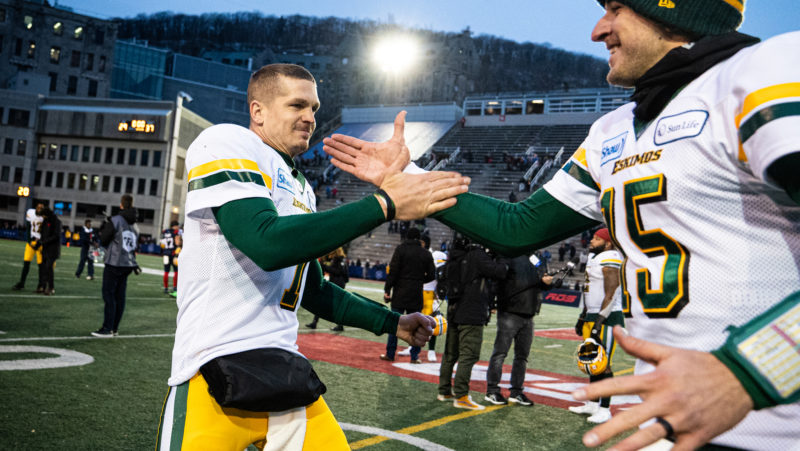 Harris has created a foothold for himself as the starting quarterback for the Ottawa REDBLACKS. After coming up just short of the ultimate prize in the 106th Grey Cup presented by Shaw, the veteran pivot was looking at another chance to hit the open market in free agency, but he assumed a return to Ottawa was in the cards.

“I was 99.99% sure it back in Ottawa and you never say 100% because you just never know,” Harris said. “As the off-season unfolded, it started to become a little bit more apparent to me that they were willing and ready to go in a different direction which was a little tough for me. But at the same time, I think that Marcel (Desjardins) knows what he’s doing he’s been a great general manager.

“I’m very thankful for the opportunity, gave me. I have nothing but great feelings toward Rick Campbell, Marcel Desjardins and all my teammates there. Because of that, the fact that they afforded me my first opportunity to be a guy.”

That led him to Edmonton, where he was able to have a tremendous 2019 campaign. Through the first half of the year, the 33-year-old was on pace to break his previous career-highs in passing yards and touchdowns and looked to be in line for some hardware at season’s end.

However, Harris suffered an injury to his throwing arm in Week 13 against Calgary, forcing him onto the injured list.

“It was hard for me. I’ve never had an injury where I couldn’t do what I love to do,” Harris said. “In pro football, you feel like you have a superpower; I felt like Spider-Man but don’t have the web and it’s like, you can’t do it. It’s the first time in my life I’ve tried to throw a football and I just couldn’t do it.

“It was humbling. It was hard. I’m just thankful that it was in God’s plans for me to rehab and be able to come back good enough to play the rest of the season.”

Backup Logan Kilgore was able to help get the team to the postseason in the meantime, as the Eskimos clinched the crossover position.

Harris returned to the lineup in Week 20, completing over 70 percent of his passes for 321 yards and a touchdown in a loss to Saskatchewan at home.

In the playoffs, the signal-caller was on his way to making history, as he completed 22 consecutive passes in the Eastern Semi-Final against Montreal, coming up one shy of tying Jeremiah Masoli’s record set in 2016. His efficient play on the day helped the Esks move onto Hamilton and the East Final. Unfortunately for them, that’s where their season would come to an end, as the Tabbies were just too much to handle on the day.

The Eskimos have been busy in free agency, but rather than making splashes like last off-season, they’ve done well to shore up their depth on either side of the football while adding some solid starting talent as well.

The majority of their offensive weapons remain from the previous season. Receivers Greg Ellingson and Ricky Collins Jr. return while the team looks to have a new feature back in 26-year-old Shaq Cooper. DaVaris Daniels and Natey Adjei have both departed for Toronto and C.J. Gable is reportedly considering retirement. 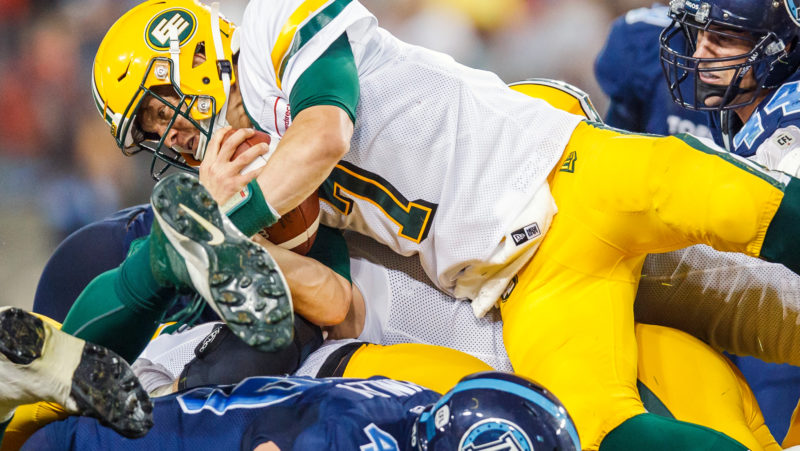 Edmonton Eskimos quarterback Trevor Harris hops over the pile of Toronto Argonauts defenders on the goal line. (The Canadian Press)

Possibly the biggest change to the offence will come in the form of new head coach Scott Milanovich, who takes over in place of Jason Maas.

Milanovich worked alongside Harris during his first years in the CFL as a member of the Toronto Argonauts, and the pair are going to be a formidable duo once again in 2020.

The Eskimos signalled a clear urgence to make it back to the Grey Cup with the coaching change. Only time will tell how the Edmonton offence can improve on their previous year. As for Harris, he’ll be back and ready to go for 2020, but he’s hoping to help the team around him grow in 2020.

“I care about my teammates I want them to know that I have their back. I’m always going to have their back. I think that as a quarterback, you consider yourself a leader, so leadership in its most simple form is just influence,” Harris said. “I want the guys that I play with and the guys that I have played with to know that I care about them and I want to influence them to believe in themselves and heighten their game. That’s really what I hope to be remembered for.”