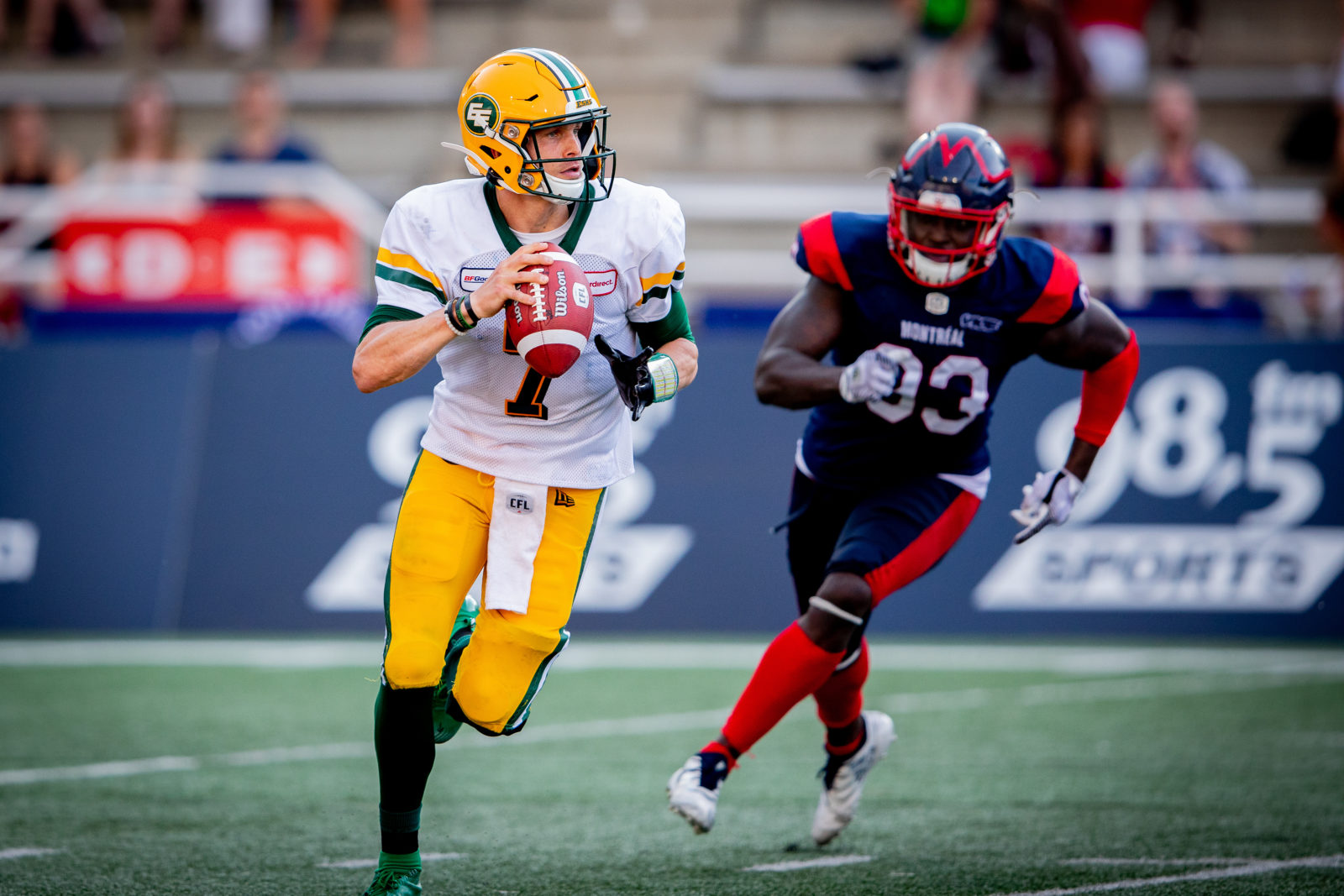 In my last blog, I promised more football and less assessment of our changing world. So I thought that today I’d tell a few football-related stories.

Over the last couple of weeks, I’ve been thinking about my time around the CFL and how I arrived as a *pretty* green freelance reporter, ended up covering the Edmonton Eskimos for 4.5 years and eventually made my way to Toronto and started working for the league. I know my numbers pale in comparison to some of the die hard fans that have made the trip for more years than I’ve been alive, but I’ve been lucky enough to work five Grey Cups and have crisscrossed the country covering the playoffs the last three years.

So here’s a brief and hopefully interesting list of some of the firsts I’ve experienced since I first set foot on the grass (it was still grass then) at Commonwealth Stadium in Edmonton in 2008. 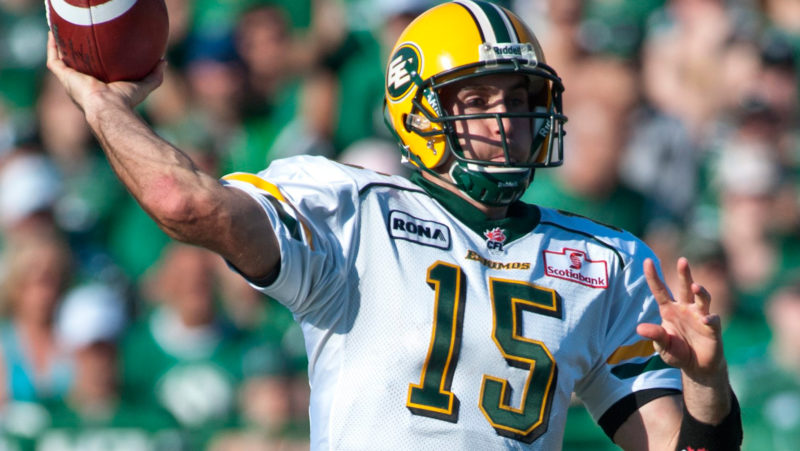 Ricky Ray was the most recognizable face on the Esks’ roster in 2008 (CFL.ca)

FIRST PRACTICE
In 2008, I was still a fresh graduate of the University of Alberta and was looking for any kind of sports writing/journalism work I could get. The Edmonton Journal had been very helpful to me in opening doors and giving me opportunities at a point when newspapers weren’t very keen on hiring.

I was getting general sports assignments from the Journal at that point. High school sports, the Golden Bears and Pandas at the U of A (some beats I knew well from my time writing for the school paper) and random events like ringette national championships and the world canoe polo kayak championships fell to me throughout that year.

Then one day my editor, Bob Boehm, called me and told me that I was going to have to cover the Esks for the next month or so. The Journal’s beat writer, Vicki Hall — the most overdue person in the country to be named to the Canadian Football Hall of Fame’s media wing, in my opinion — was headed to Beijing to cover the Olympics. I was going on the Esks.

The only problem was that I had never covered football and hadn’t really watched that much either, to that point in my life. I knew that the Esks had been good for most of the 2000s, then bad and missed the playoffs for the first time in 35 years. I knew who Ricky Ray was, but not much more than that. Actually, that was it. That was all I knew and it’s the key part of this story. I spent a few days on the beat with Vicki, then she was off to China.

I walked into the Esks’ locker room flying solo for the first time feeling like a fawn on ice. I was uncomfortable. Vicki had left me some story ideas and until I got my feet under me, that email would serve as a digital bible.

One of the suggested stories was on Jason Tucker. I didn’t know Jason Tucker at that point, so I scanned the room for his stall. There were a couple of players hanging out there, one seated. I made my way over and waited for a second.

“Jason? Do you have a second?” I asked. The player looked at me and made a face.

“Jason, can you talk for a minute?”

This was in fact not star receiver, future coach and all-around nice guy Jason Tucker. It was a backup running back, who found my absolute worst-case scenario absolutely hilarious. He wasn’t quiet about it. The players next to him started laughing. I was mortified. I don’t know that I was laughed out of the room, but I was definitely laughed out of that conversation. Looking back on it, probably rightfully so. I don’t remember what story I filed that day, but I eventually got to know every player on the team. That’s not a situation you ever want to be in again. 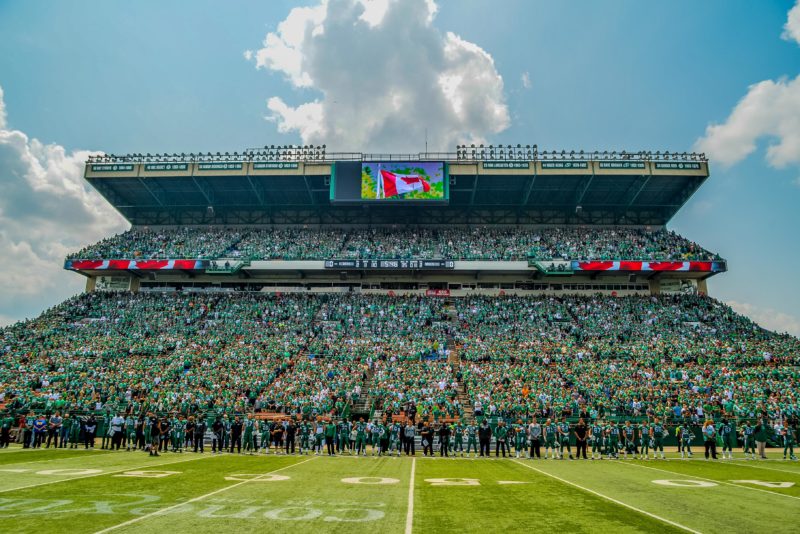 Old or new, Mosaic Stadium is a must on the CFL circuit (CFL.ca)

With a better knowledge of the Esks’ roster and the people around it, I was hired by the Journal in 2011 to make the Esks beat my primary job. It all unfolded quickly, but I was there just in time for rookie camp and the two-a-days of training camp that followed.

In hindsight, my first road trip couldn’t have been a better one for a couple of reasons. First, I’d never set foot in Regina, let alone (now old) Mosaic Stadium. There isn’t a better place to get an on-the-road CFL baptism than at Mosaic. There were over 29,000 fans there for a preseason game! The passion for their team was obvious.

I don’t remember a lot about the game itself. I know it was cold and extremely windy. I know that at the end of the game, Marc Mueller — Ron Lancaster’s grandson and at the time a QB in Esks’ training camp — got in and he played well, making all three of his passes for 45 yards. Mueller didn’t make the team, but is still a part of the CFL. He’s been on the Stampeders’ staff for the last six years, mostly as a running backs coach.

The Riders held on to win, with that gusting wind denying a Derek Schiavone field goal attempt from 55 yards. It was a perfect Regina night and the perfect introduction to the CFL outside of my hometown. 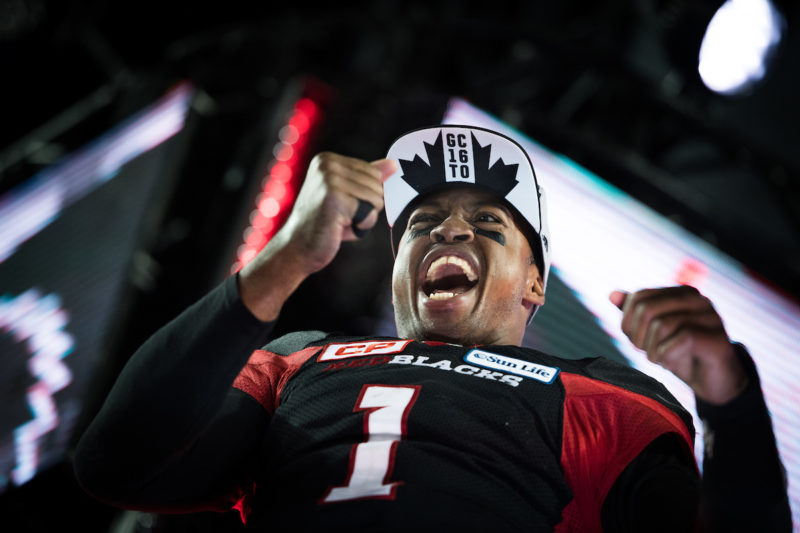 Henry Burris wrote the perfect final chapter to his story, leading Ottawa to a Grey Cup win over Calgary in 2016 (Johany Jutras/CFL.ca)

I had a bit role in the 2010 Grey Cup in Edmonton, but the first full week that I took in of a Grey Cup was in 2016, nearing the end of my first full year in Toronto. This was a year where the game outdid the festivities of the week (I still had my fun following a horses to hotels and Baltimore Stallions fans around the city though).

The Stamps were the talk of the week leading into the game. They’d gone 15-2-1 and had felt unbeatable the whole way. They were up against an Ottawa team that, to their credit, tied with the Stamps that season, but managed just an 8-9-1 record and were heavy underdogs.

Of course, Henry Burris wasn’t worried about who had won how much, or who believed in his team coming out of a weaker division that year. The 41-year-old didn’t even let a substantial pregame knee injury phase him. Backup Trevor Harris thought for about a minute that he’d be getting the start before Hank insisted that he was good to go.

In the days leading up to the game I thought back to an old Sports Illustrated article I’d read when I was a kid. It was an Olympic preview issue and the magazine was coming up with creative ways that the U.S. Dream Team could lose in Barcelona. There was a scenario where international photographers could repeatedly use their flashes to blind the collection of NBA players, leaving them prone to turnovers and unable to defend. I thought about writing a similar story for this Stamps team that seemed so perfect and in such a good rhythm. How could they lose? How would they even be challenged with a hobbled Burris leading the attack?

Ottawa was up 20-7 at the half, withstood a furious Stamps comeback to get to overtime and Ernest Jackson pulled in a Burris pass in the second frame of OT to seal the deal. With a loose deadline, I stayed on the field and tried to take in what the Ottawa players were feeling. I watched Burris’ best friend from college waiting to pull him off of the stage and celebrate after the trophy had been presented. I saw Burris hug his wife. I learned that a championship-winning locker room is one of the happiest things you’ll ever see in your life. And that the smell of champagne and cigars fills up a room quickly. 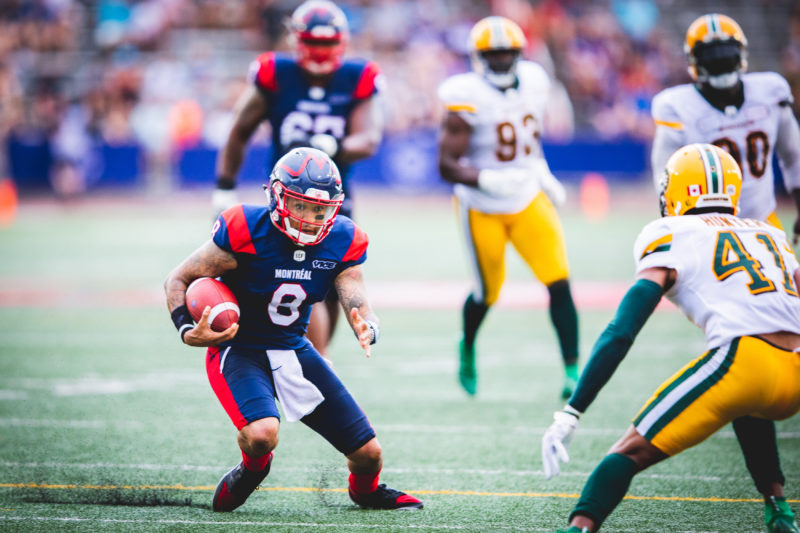 FIRST ZIG ZAG OF (MOST OF) THE COUNTRY

The 2019 season marked my third with the CFL. My first two years on the job, I went west to cover the playoffs. Last year, though, the Montreal Alouettes were too intriguing for me to ignore. Perhaps you noticed that I picked the Als to win a lot of games last year. What started out as an against the grain vote in our weekly picks turned into a fun tradition that paid off 10 times for me last year. You may counter and say that I was wrong eight times. I would choose to ignore that argument.

I stand by the notion that the Als were the funnest team in the CFL last year. My begging and pleading was answered when I asked to first work the Als’ playoff game, then cover the rest of the West playoffs, which of course were capped with the Grey Cup game in Calgary.

Thanks to the crossover, that resulted in a lot of travel. We went from Toronto to Edmonton for a few days to cover the Esks, then made the trip back to Montreal to focus on the Als and to get ready for the Eastern Semi-Final. After Trevor Harris played a magnificent game for the Esks and led them to a win, we got on the road again. After a laundry day in Toronto, we were in Winnipeg, then Saskatchewan after the Bombers beat the Riders took a weird flight back to Winnipeg that pit-stopped in Calgary first. A week later, I was on a flight back from Calgary to Toronto, with a lot of happy Winnipeg fans on board.

SELF-ISOLATION HACK OF THE WEEK: RUNNING

I know I said I’d stick to football on this, but trust me, I’ll bring it back to it. In the midst of all of the bad news we’ve been reading the last couple of weeks, I’ve found that stories about coping, or finding shreds of normalcy in the change we’ve all gone through to be extremely helpful.

Wendy Gillis at the Toronto Star wrote a great piece this week on how running connected her to her city
and how it provides some calm and balance to it now.

I went for a run on Wednesday and I can say that it was one of the most therapeutic things I’ve done in the last two weeks. The cabin fever, the stress, the anxiety, anger, fear or whatever you might be feeling can get poured into that run, no matter how well or how poorly it goes (and for me it went poorly; it really didn’t matter).

We’re limited in what we can do right now. Walks and runs (I try for non-peak hours) need to still be carried out ensuring social distancing is practised and that you don’t touch your face. I carry a Lysol wipe in a bag in the pocket of my shorts, just in case I’ll need it. Worst case, it helps me with door handles or anything else that I might want to avoid on my way out/in of the home.

The football tie-in: sometimes I like to think of my run as a long kick return or a pick-six run. In years past I used to pretend I was dodging the other runners that were coming toward me. Now it’s a little more necessary. Be courteous and leave your fellow runners and walkers lots of room out there. Think of it as your own returners’ halo.