Sinagra ready to make the most of CFL opportunity 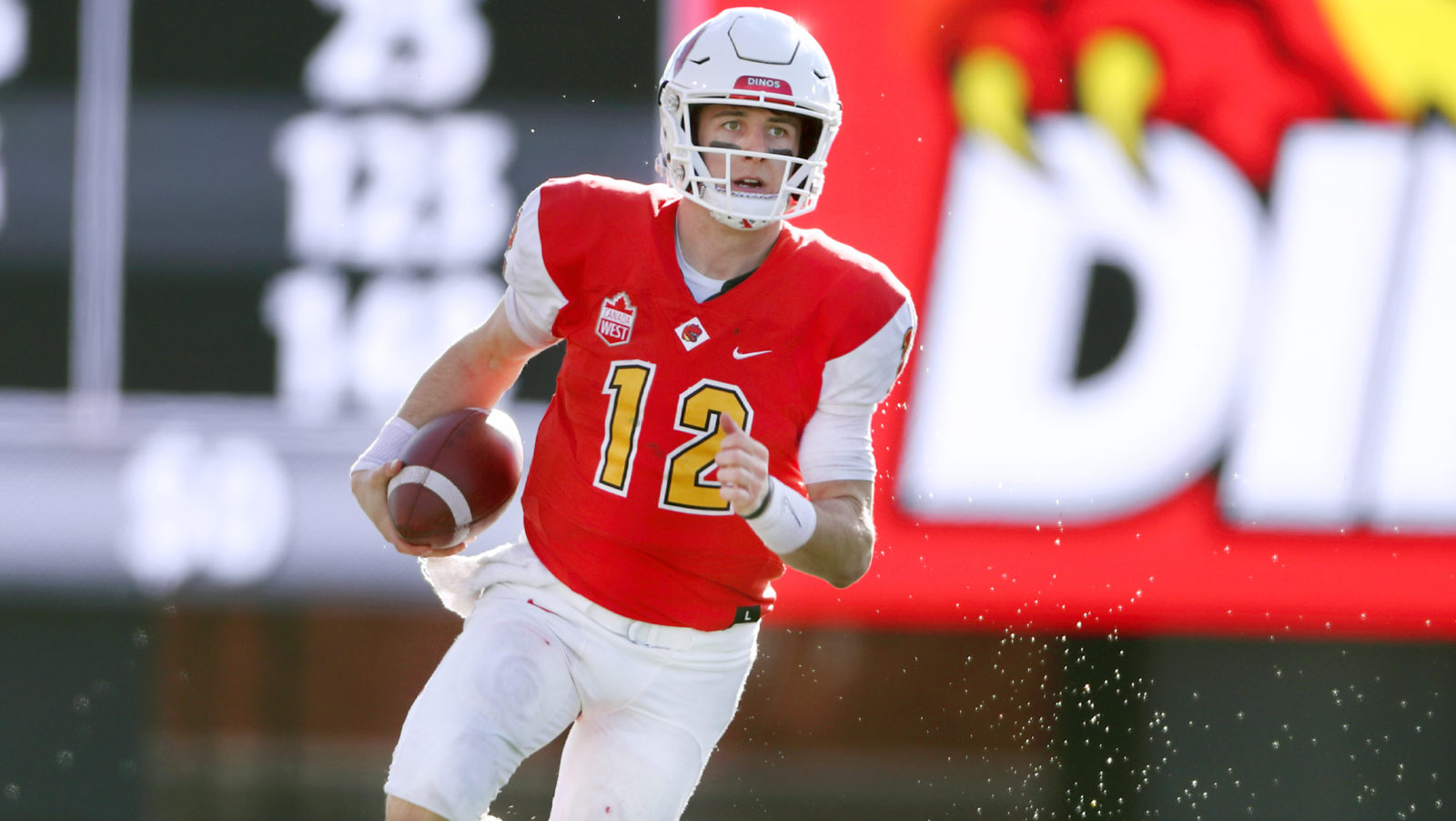 Sinagra ready to make the most of CFL opportunity

Watch one highlight pack of quarterback Adam Sinagra and you’ll know exactly why he’s set to be one of the first quarterbacks off the board in the 2020 CFL Draft. He can make all the throws, he isn’t afraid to take a shot downfield and he can evade the pass rush and run outside the pocket.

Sinagra decided to head to a different province to continue his football journey. That led him to broken records and a number of trophies, for both himself and the University of Calgary.

Now, with his U SPORTS career in the rearview, he’s looking forward to the draft process. He’s been preparing as best as he can with the current circumstances and working towards finishing up school while he prepares for a shot in the CFL.

“I’m just taking it day by day I guess like everyone else,” Sinagra said. “You don’t really know what’s gonna come into fruition the next month or so I’m trying to save as much as possible and finish off this semester.” 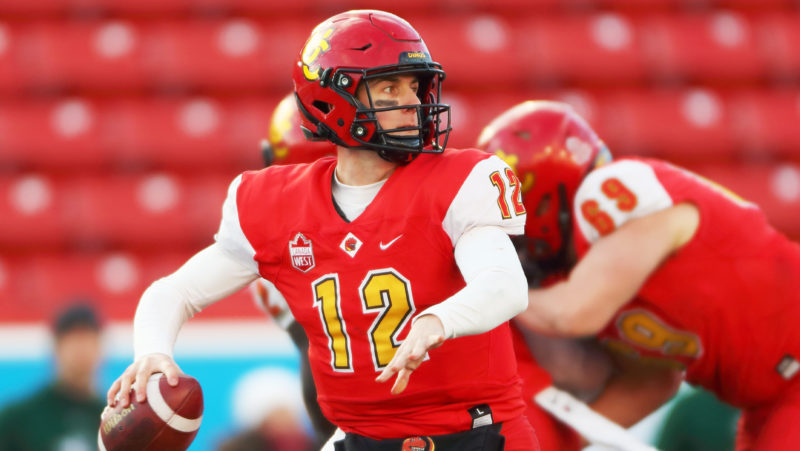 Sinagra grew up in Pointe Clare, Que. He began playing football with the Chateauguay Raiders and the St. Laurent Spartans before heading to John Abbott College, a pre-university school. He had a number of teams courting him from around the country, however, he ultimately headed West, joining Calgary to play his collegiate ball.

“I think the ability to compete on national levels really talked to me with Calgary,” Sinagra said. “I got recruited by a couple of other schools, not too many but I just felt like if you don’t have the goal set of winning a Vanier Cup — I’m sure every team does but realistically there’s maybe 10 teams that could win. Calgary is one of them every year so I just couldn’t go into an off-season knowing that an opportunity to win any cup is not possible.

“I kind of wanted to move away from home and carve my own path and Calgary allowed for me to do that, especially with school and on the field they all just kind of worked well.”

2018 served as the best season of Sinagra’s career with the Dinos. He started all eight regular-season games for the team, completing 66 percent of his passes for 3,233 yards and 21 touchdowns while adding 129 yards on 13 rushes. He earned Canada West Male Athlete of the Year as well as the Frank Gnap award as the Canada West Football Player of the Year. He also took home the Hec Crighton award as the nation’s most outstanding player and was nominated for the U SPORTS Lieutenant Governor’s Athletic Award, a pair of honours that ring among the top of his list of personal accomplishments.

“I think the Hec Crighton was a really huge personal accomplishment for me, but I have to put it towards getting nominated for the Lieutenant Governor Award. That was a really cool thing,” Sinagra said. “There are so many athletes in sports and to be one male and you know across like 26 or one or four males across 26,000 athletes and U SPORTS is a pretty cool accomplishment.”

He reached the ultimate peak of Canadian collegiate football this past season with Calgary. The team managed to go 6-2 in conference play, with losses to Saskatchewan and Manitoba being the only bumps in the road.

Once the Canada West playoffs rolled around, they continued their solid play, avenging both of their previous losses en route to winning the Hardy Cup and earning a spot in the Mitchell Bowl against McMaster. They’d take that game at McMahon Stadium by a 30-17 score, punching their ticket to the Vanier Cup, where they’d face the Montreal Carabins in Quebec City.

It was a chance for Sinagra to capture the ultimate prize in the province where his football journey started, and he made good on the chance. He completed 22 of 28 passes for 292 yards and a pair of touchdowns in the 27-13 victory. Sinagra captured the Ted Morris Memorial Trophy as the game’s Most Valuable Player.

“There were a lot of bumps in the road. We got there in my first year and you always think you’re gonna get back and it’s really it’s not easy — it shouldn’t be,” Sinagra said of the journey to the championship. “I think that was a huge message to our team. Nothing great ever achieved ever came easy so this year was just all about putting our heads down.

“It wasn’t a pretty season but we got hot at the right time and we came together as a team and play complementary football to the playoffs and it really propelled us to win a championship.”

For his career, Sinagra finished with 8,354 yards and 60 touchdowns through the air while completing 64 percent of his passes in 31 outings. That puts him second all-time in both passing yards and touchdowns behind only Greg Vavra in program history. He also finished third all-time in career completion percentage.

Over the past two summers, Sinagra has had the chance to work with CFL teams as part of the Canadian quarterback internship program. In 2018, he joined the Calgary Stampeders for their camp, having the chance to work alongside Bo Levi Mitchell and Nick Arbuckle — who will get his first opportunity to be a full-time starter with the Ottawa REDBLACKS in 2020. This past summer, he travelled three hours North to join the Edmonton Eskimos for their training camp. There, he was able to work with new Esks signing Trevor Harris.

Additionally, he was able to pick the brains of former CFL pivots in Dave Dickenson and Jason Maas in the process. He took those lessons in camp and applied them to his game.

“I think they’re just true professionals. It’s a different step. it’s full-time football, all the time. So, your job is to play football and your job is to study film,” Sinagra said. “I think I’ve done a good job of really grinding in the film room and it’s really paid dividends on the field for me.

“I think just seeing how they work, how they take notes, their viewpoint of the game and talking about certain concepts and how they achieve certain concepts. Everyone has their own feel of the game and their own flavour. You know, the important thing is to not be a robot when playing in a system. Everyone has their own viewpoint on how a play works but it obviously comes down to executing the play the coach draws up.

“I think I learned a lot from there it took a lot of new ideas. I think I was able to see and adapt to how fast the game was. Those guys were very welcoming to me and I really appreciate my time with them.”

Sinagra says that he doesn’t try to model his game after any current CFL quarterbacks, however, growing up watching the Alouettes, he idolized legendary signal-caller Anthony Calvillo.

As for the draft, Sinagra was the 14th-best prospect in the December edition of the Scouting Bureau rankings. CFL.ca’s Marshall Ferguson has been watching closely and knows that the

“Adam is a dynamic talent whose leadership and ability to make throws under pressure separated him from his U SPORTS contemporaries,” Ferguson said. “His calm demeanour and consistent fundamentals allowed him to adapt to any situation on his way to a Vanier Cup championship this year and those same qualities should earn him a shot in a CFL training camp.”

Sinagra has the makings of a player that any team in the league would be more than happy to bring into their quarterback room. While there are some teams who could use some depth at the quarterback position — especially a National pivot with his abilities — Sinagra doesn’t have any specific landing spots in mind.

He’s confident that he’ll fit with whatever team he lands with.

“You’ve got to hope for the best and wherever you get chosen or if you get signed,” Sinagra said. “You’ve got to make the most of the opportunity, no matter what the circumstances. So I’m just looking forward to getting an opportunity and proving my abilities to the coaches.”