Bombers getting creative with off-season workouts 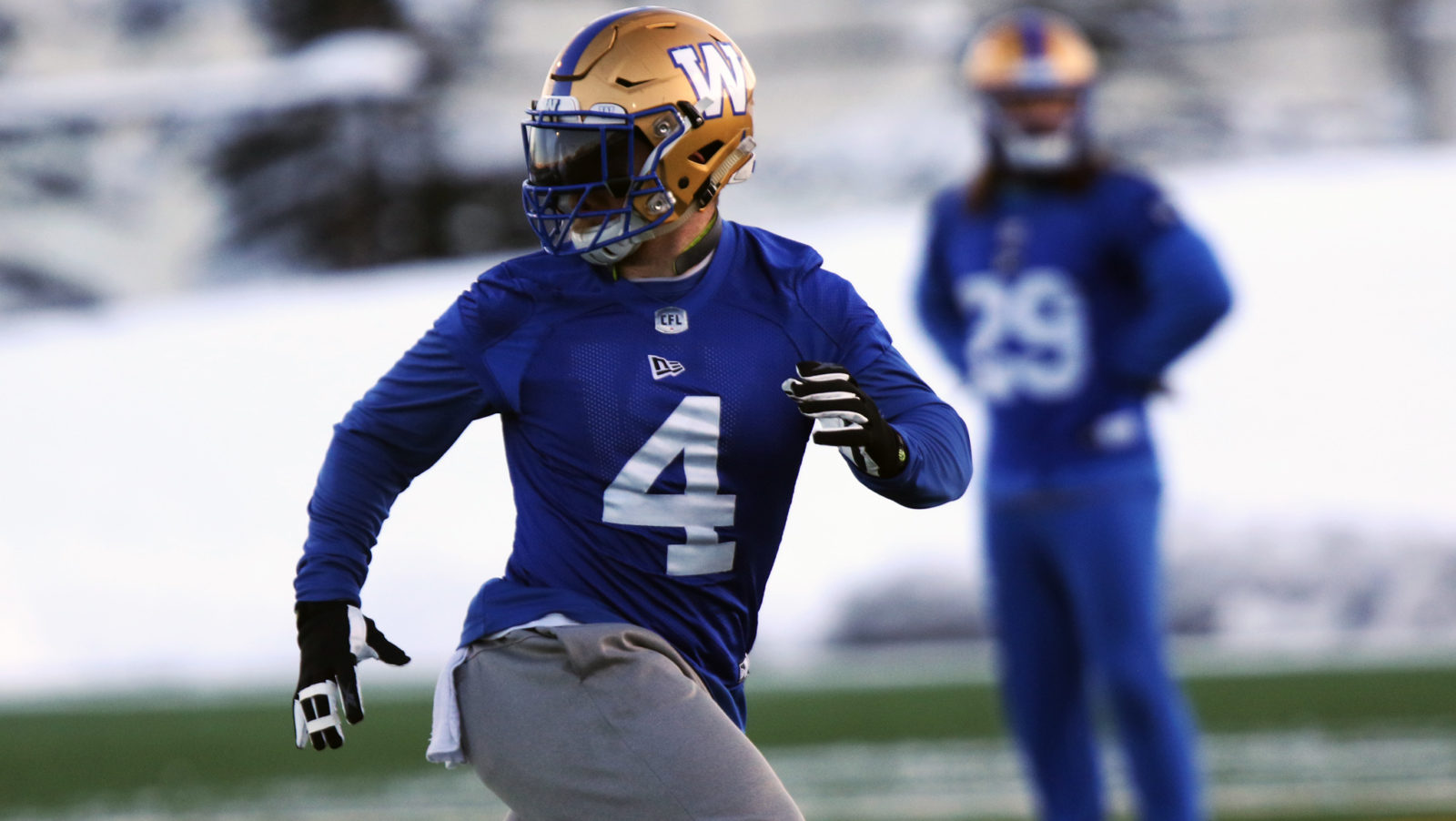 Bombers getting creative with off-season workouts

Their careers are built on training and routine, then enhanced by the bonding and camaraderie that comes from sharing a locker room and the same end goal: a Grey Cup championship.

So with that regimen altered, the Winnipeg Blue Bombers have worked to find alternative ways to stay of sound mind and body.

Here are three stories, in particular… 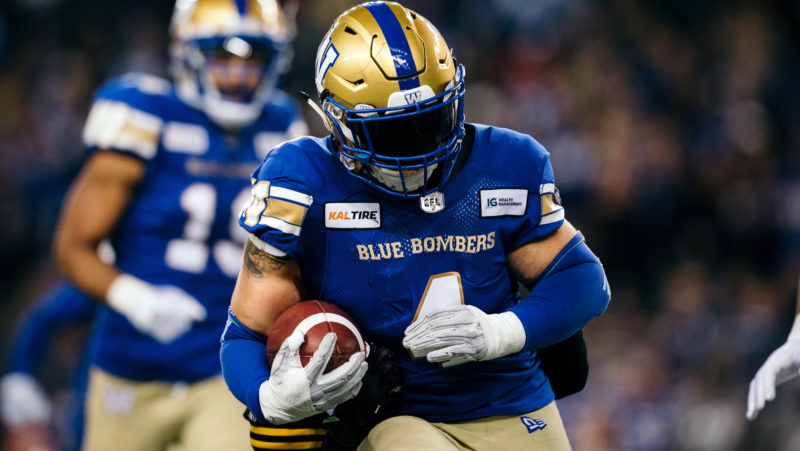 Adam Bighill has never been the sort to sit on his hands or do the couch-potato act. He has a go-go-go personality that means he is seldom gearing down physically or mentally.

On top of his training and helping raise his three kids – Beau, Leah and A.J. – with his wife Kristina, the Bombers veteran middle linebacker already has a post-career gig in play, as he has been working with Wellington-Altus as a financial advisor for nine months.

“Luckily for me, I’ve got no shortage of amusement with the three kids,” said Bighill in a phone interview from Vancouver. “There’s always something to do for me. On top of that, I’m always on the computer here at home working on the financial side which still keeps me busy. There’s no client interaction other than e-mails and calls, but I am continuing to do research.”

A ferocious trainer, Bighill – like most of his teammates – is now quarantined and without access to some of the facilities that are critical for strength training. He came up with an innovative method for doing push-ups…

Got the challenge for 50 so took it up a notch with LEAH’s help. #QuarantineTraining pic.twitter.com/46k3re8TI3

AJ and I showing you at home how to get your knees over your toes further, while lengthening and strengthening the quads more. #QuarantineTraining #4TheW pic.twitter.com/f0Mut8qEBz

“You can usually feel that training camp is around the corner at this time of the year so you usually use the time you can to train,” said Bighill. “Now you do what you can with what you’ve got.

“I don’t really have a lot of equipment at home, so it’s mostly bodyweight training and plyometrics and running. I’ve been focusing more on the running side because I didn’t want to load it up early. But now it’s time to ramp up the running and transition to that.” 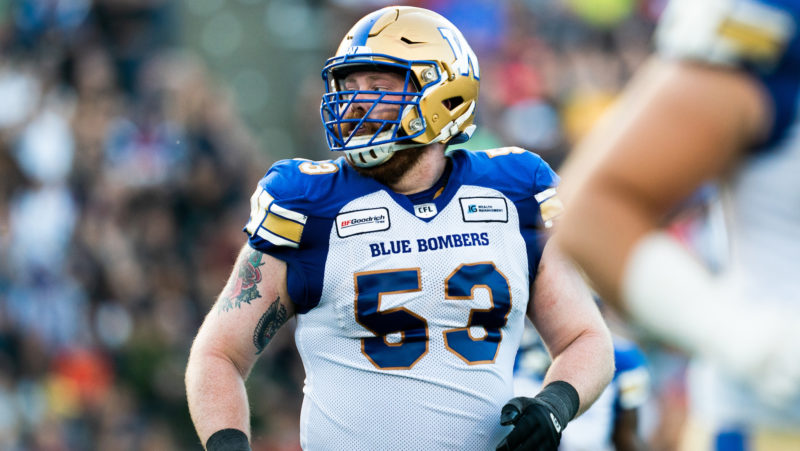 Pat Neufeld is a large man, officially listed at 6-6 and 313 pounds. And when the Bombers’ offensive lineman is working out it usually involves throwing around massive amounts of weights over and over and over again.

And so when a guy is doing the self-isolating thing and doesn’t have access to his usual training facility in Saskatoon, it’s time to get creative.

“I was lucky… my parents have an adjustable dumbbell set and I was able to drive down and meet them about halfway between Regina and Saskatoon to pick that up,” said Neufeld in a chat with bluebombers.com. “Plus, over time I’ve accumulated some tubing and bands and have been able to hook them up to things in my basement to do volume-style workouts. I don’t have barbells and plates kicking around, so that’s the kind of workouts I’m on to now.

“It’s a full-body approach to training where I’m trying to cover as much as I can with a lot of volume to keep active, get a good sweat on and maintain what I’ve built over this off-season. But it is tough.”

Neufeld said he has been scouring the internet trying to find a squat rack and barbells, but “with public gyms closing down that’s become a hot commodity now, especially here in Saskatoon. I might have got lucky and hopefully next week I can pick one up.

“So much of what I’ve done over the last five or six off-seasons has been done in the gym, even in regards to cardio with sled pushes or cycling or high-intensity sprint work. Now you’ve just got to adapt and figure out the best way to do this. Hopefully, I can find that squat rack, get some weights, throw all that stuff in the garage and start doing some Rocky-style workouts.” 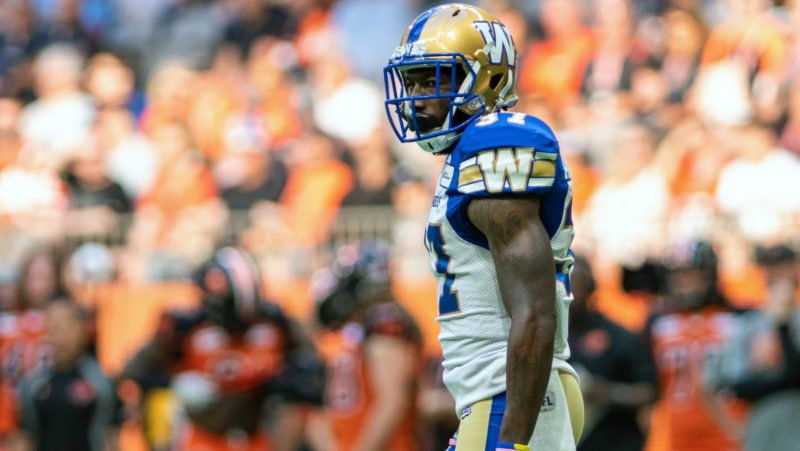 Brandon Alexander is in Orlando, Florida waiting for any kind of positive news that might represent a return to ‘normalcy.’

“This is uncharted territory for everybody,” he began, “and we’re all trying to figure it out as we go along. It’s an unfortunate situation. All you can do is stay healthy, continue to work out and make sure you are available for your family as well. It’s important to be around the people you love and care about.”

That’s a simple answer, but one loaded with the proper perspective at a time like this. Alexander is a glass-half-full guy and is trying to find some silver linings as he prepares for the 2020 CFL season.

“This is what the off-season is for, so for me this is giving me more time to reaffirm myself as an athlete,” he said. “I have more time to do drills, to be in the weight room before the season starts … I’m trying to look at this positively.”

Alexander insists it’s just as important for the Bombers – for everyone – to continue or crank up interaction with teammates, friends or family by calling, texting or e-mailing.

“Our team is already in a bunch of group chats,” Alexander said. “We’re all just checking in on each other and seeing how we all are doing and what we’ve all got going on and what we’d like to get accomplished as a unit.

“We want to be cohesive as quickly as possible because this will be a brand new team. So, it’s not just the defensive backs chatting with each other, it’s everybody. I talk to Yoshi (Jermarcus Hardrick). I talk to Darvin Adams. I talk to a lot of the guys just to make sure they’re OK.

“We really do care about each other off the field. We call each other brothers and that’s truly what we are. We abide by that.”