In 2014, Jordan Williams was a walk-on at East Carolina University. At the time, he said he had 17 cents in his bank account at one point. His ascension up the depth chart to full-time status at the school is something to behold.

Williams has been grinding to get into the position he is today and following a standout showing in front of scouts from around the CFL, he’s poised to be one of the first linebackers off the board in the 2020 CFL Draft. 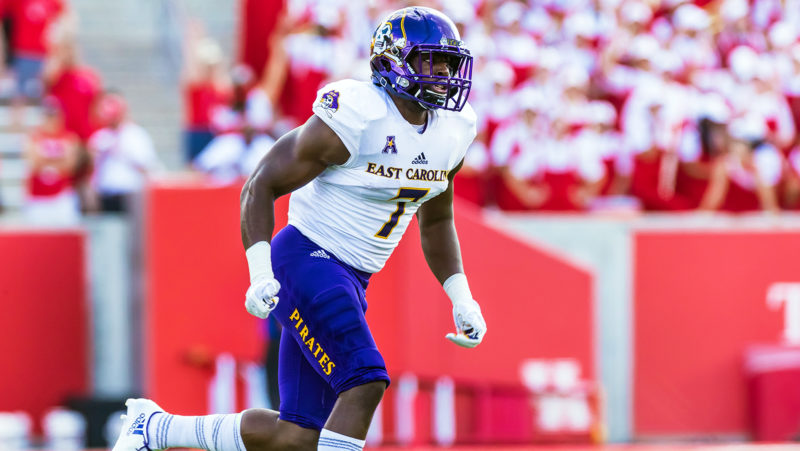 Williams grew up in Fayetteville, North Carolina, but he did spend some of his time north of the border growing up. His mother was born in Toronto and he’d regularly make trips back to the city to see relatives.

Coming out of high school, Williams was courted by several programs, but he had chosen to play his collegiate ball at East Carolina. He had a plan in place to go to Shaw University first, to get his grades up. He focused solely on academics there and didn’t play for the school’s football team.

In 2014, he’d walk-on at East Carolina and begin his ascension up the depth chart, providing solid play for the Pirates on special teams as a redshirt freshman.  He appeared in nine games in his opening collegiate season.

A year later, he earned a scholarship.

“It was surreal because me and a teammate were talking and saying ‘Dang, money is running low,'” Williams said. “… Then we got put on scholarship and boom, a massive cheque came in. A lot of people get into debt loan so that’s the biggest part of that situation, financially.

“Then, just the camaraderie we got from our teammates, who were jumping up and down. I’ve never seen so many people so happy for another person. So it meant a lot.”

He played in all 12 games and started 10 of those contests in 2015 for ECU, playing the majority of his time at the Buck linebacker position: A hybrid linebacker and defensive end spot.

Williams appeared in 45 games during his career with the Pirates, making 252 total tackles, 13 tackles for a loss, three sacks, one interception and a pair of forced fumbles.

Williams returned to Toronto one more time in early March to attend the Ontario Regional Combine alongside some of the best talents in the province. His showing on that day was eye-opening, to say the least. Williams finished with the best 40-yard dash time among any position with a 4.48, besting his previous best at ECU. He also had a 39-inch vertical (good for second), 20 reps on the bench and a 10-foot, 8.5-inch broad jump.

He’d set a list of expectations for himself during the physical testing and Williams hit three of his five goals. He was hoping to have a higher number on the bench and have a better shuttle time (he ran it in 4.4 seconds, tying for fourth-best).

He’d been away from the game for an extended period after graduating from East Carolina, so when he stepped onto the field at Varsity Stadium for one-on-ones, Williams was just excited to get back out there and battle. 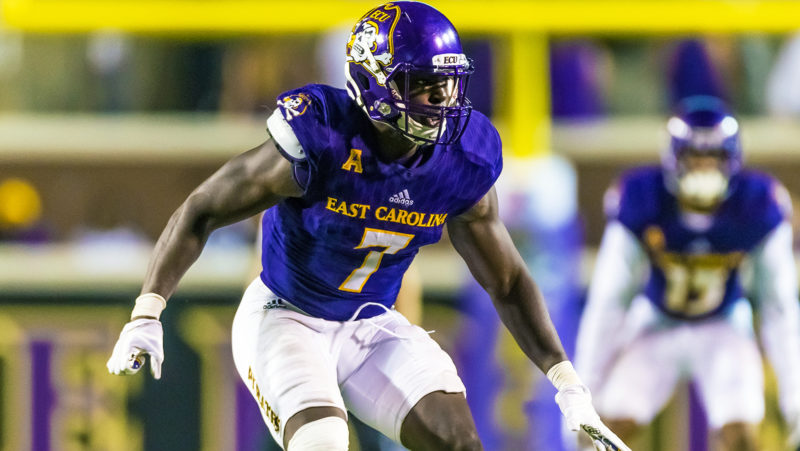 It only takes one impressive performance to land on the radars of teams and Williams did just that at the Ontario Regional. His tape in the NCAA speaks for itself and his measurables were off the charts, as he finished in the top 10, at least, in every category. He was top-five in all but the 3-cone drill.

“The physical attributes such as the lifting, the jumping and the running was phenomenal. I’m not going to sit here and sugarcoat it, I believe it was a good performance,” Williams said. “But in terms of getting acclimated to the CFL game, such as getting used to cutting and doing the one-on-ones, doing the special teams drills and learning the game, I believe I can improve on that because I like to be the best version myself and I’m a very hard grader.

The linebacker is learning the nuances of the Canadian game. He got a taste of the wider field during the combine and has been studying film for the last little while, using the likes of Adam Bighill as examples of how to excel in the CFL.

That should help his transition to a different style of play a lot easier. Now that he’s getting used to the waggle, Williams is working towards getting the pass rush down.

“It’s a little difficult because it’s a timing thing,” he said. “You’re a yard off the ball, it’s a whole different mechanism on how you attack the ball, so it’s a little bit different there.”

In his first mock draft for CFL.ca, Marshall Ferguson has Williams off the board in the second round, 11th overall, landing back in Toronto with the Argonauts. If he fell to this position, the Double Blue would land a player who has definite starting potential.

“In a year without much in the way of combine numbers to evaluate, Jordan Williams was able to make an impression in a single morning at the Ontario Regional Combine.

Williams describes his game with just one word: Tenacious. He flies to the football and is a sure tackler once he gets his hands on the ball carrier. His favourite player growing up was 49ers legend Patrick Willis, who made the Pro Bowl in seven of his eight seasons due to his dominance in the middle of the second level for San Francisco.

Now that the game has evolved, he looks to other stars for inspiration.

“Looking at the game, for the most part, there’s a lot of spread and a lot of widescreen coverage. So, because of that I do try to model my game to the gods of the new prototype linebackers such as Deion Jones of the Atlantic Falcons and people like that,” Williams said. “He ran a 4.39 at the combine so that’s what I tried to model my game on.”

He’s currently in Louisville, Kentucky ahead of beginning his CFL journey.

He’s a player that has the ability to wear many different hats on a team. He can line up at either outside or inside linebacker and has experience on the edge and special teams on top of that. He’s an impact player in the making that is itching at the chance to play north of the border.

“Any team that takes me, I’m just blessed to go and work out for the team and try my hardest to bring a Grey Cup back.

“As a first-year player, whether it be special teams or contributing to the practice squad, it doesn’t matter. Every piece matters.”