A month ago, Dan Clark’s off-season was the same as the previous seven he’s enjoyed as an offensive lineman with the Saskatchewan Roughriders.

His winters are spent speaking to students across the province, working with the Red Cross and the Riders to bring the message of anti-bullying to schools. On March 2, he gave a presentation at a school in Regina then took his wife and their two kids on a vacation to Mexico on March 5.

All of the standard off-season stuff was turned on its head while the Clark family was away. They returned at the beginning of the COVID-19 outbreak and quarantined for two weeks, ensuring that they were all OK.

Now, the 31-year-old is like the rest of us, hunkered down at home and keeping himself and those close to him occupied while staying positive through an unprecedented time.

“We’re doing everything that we need to be doing,” he said. “The more we all do our part the sooner we can get back to normal and get what we all want and that’s Roughrider football in the community in a safe and healthy environment.” 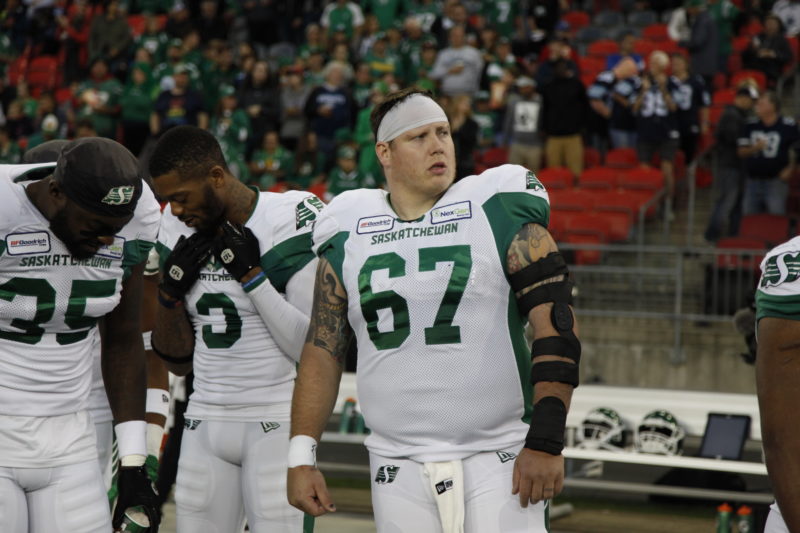 Working out at home and spending time with his family, Dan Clark is making the most of an uncertain time (Jimmy Jeong/CFL.ca)

Like many of us, he’s overwhelmed by the courage that people on the frontlines of the fight against the virus are displaying. A car accident last year deepened his appreciation of first responders and doctors and nurses. He urges people to think of them now and to stay home and take all of the necessary precautions to not overwhelm the healthcare system.

He misses going into schools and sharing his story. It might be tough to believe, he says, that a six-foot-two, 310-pound man was bullied as a kid, but it’s a lasting memory from Clark’s childhood. He was bullied about his size until he started playing football in high school. Once he became a part of a team, everything changed. His off-seasons are now dedicated to sharing that message with kids and applying it to broader themes in life.

As we navigate a period in our lives where isolation is a necessity, Clark sees that broader theme from football applied here. We’re isolated but in something together.

“We want to encourage people to be responsible. Wash their hands, stay home, practice that physical distancing that we always talk about, but also to have hope in each other.

“Don’t be afraid to FaceTime someone and give them that smile. We were blessed with this technology and having that opportunity is huge.”

Like many athletes around the world right now, Clark is forced to modify his workouts to stay in shape. He was lucky to get some equipment from a gym before everything shut down, but he’s still missing some simple workout items, like dumbbells. He’s replaced them with water jugs that the family buys from Safeway.

“I use our flower beds at home. They’re my box jump,” he said. “It may not be that high but if you do enough, it’ll work.

“Seeing across Twitter and Instagram, guys are coming up with some creative ways (to work out). A lot of guys have that mentality of staying prepared instead of getting prepared and that’s one of those things that makes our league so special.”

He points to a players across the league — Edmonton centre Jean-Simon Roy dead lifting his car quickly came to mind — that are working with their surroundings to continue to get their workouts in.

Got myself a new toy!! Gave it a try! More clips to come!! Thanks to my uncle for putting it all together!! #OnlyTheStrongSurvive

“I see (Adam) Bighill’s doing a lot of his running uphill…that’s not in my wheelhouse, I don’t want to run a lot,” Clark said, laughing, “In Sask. it’s been hard for my friends to get equipment, not only football players. It’s doing what you’ve got to do to keep your body in shape.”

Clarke will continue to work out and hope for the best in this situation, that Canada flattens the curve and that the pandemic can come under control. A homegrown Rider, he knows what football means to Saskatchewan and how special a 2020 season would be for the country.

“At this point it’s the whole world,” he said.

“Any time you have the ability to watch sport it brings people together. The more we all do our part, the sooner we get back to normal and get to what we all want. In Saskatchewan, that’s Roughrider football.

“That’s us being able to take the field and honour Mosaic the way it needs to be honoured. Everybody’s looking for that outlet that sports gives, that thing that brings people together and having joy.

“Even the rivalry between Saskatchewan and Winnipeg, bringing two provinces together through one thing…it’s something that’s going to happen. We just need to do our part.”