It wasn’t until grade nine that Sam Acheampong took up the game of football.

Picking up the game at such a late junction might have been hard for some, but the defensive lineman has shown tremendous upside that very few possess.

The Brampton, Ont., native was able to hone his craft over the last five years as a member of the Wilfrid Laurier Golden Hawks program, and following a standout collegiate career, he’s ready for the 2020 CFL Draft and the pro ranks. 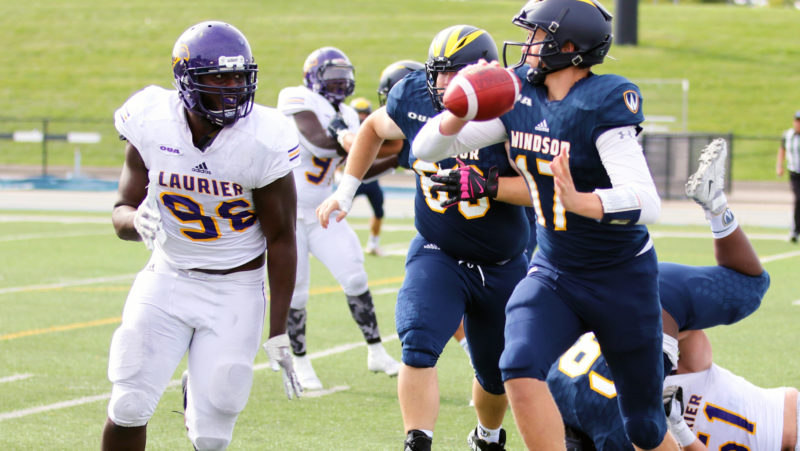 Acheampong played basketball growing up, but after hitting a growth spurt heading into high school, the football coaches at Cardinal Ambrozic Catholic Secondary School asked him to come to try out for the football team.

When it came to choosing a college, Acheampong wanted to make the switch to the defensive line full time. Several schools offered him the opportunity to do just that but ultimately, Wilfrid Laurier offered the best opportunity and fit for him.

“I knew I wanted to play right away and I knew it was the best way to develop my skill set.”

Acheampong only featured in one game during his first season with Laurier, as he was still learning his new position. He’d continue to get more opportunities with every passing season.

In 2016, he appeared in six of the team’s eight regular-season games. That season, Laurier made their run at the national championship, first taking home the Yates Cup before making it all the way to the Uteck Bowl, where they’d match up with Laval.

The Rouge Et Or ultimately took the game by a 36-6 score, but that didn’t mean that the Golden Hawks took nothing away from the postseason run.

“We learned that we were a very resilient team and that we could really beat any team once we put our minds to it,” Acheampong said. “When we really wanted to go, our defence was one of the best in the country. Our defence has always been that good.”

The next season, Acheampong played in every game for the team, starting on the defensive line. He finished the year with 15.5 tackles and three sacks while appearing in all eight regular-season contests for Laurier.

Ahead of his final season, Acheampong had the chance to be a part of the annual East-West Bowl, where he lined up with and against some of the top talents in this year’s draft. He picked the brains of some of the nation’s best and got some insight on how to better himself.

“There were a lot of guys I got to learn with like Brock (Gowanlock) from Manitoba and (Nicholas) Dheilly from Saskatchewan were able to help me learn some new moves and develop a new skill set to use for the season,” Acheampong said. “Going up against Mattland Riley, that guy was a beast. I was able to see the talent around Canada, not just in U SPORTS, and it was really exciting.”

Acheampong believes that from his first day on campus to now, the thing that he’s developed the most is his maturity. He’s also grown when it comes to understanding the game from a different perspective.

“Being around coach V (Laurier D-Line coach Ron VanMoerkerke), he really taught me and turned me into the player I am today,” he said.

He added that Boateng helped him along in his development as a defensive lineman. Current Toronto Argonaut Robbie Smith also helped Acheampong with his growth off the field.

“Every time I needed help or someone to talk to, he’s always been a guy that’s been there for me,” Acheampong said.

In his first mock draft, CFL.ca’s Marshall Ferguson had the talented lineman landing close to home with the Argos at No. 20 overall. Acheampong looks to be one of the top pass-rushers off the board this year due to his potential.

“Sam’s first step is impressive. His natural athleticism and length allows him to outreach offensive lineman in the run game to shed blocks and make plays,” Ferguson said. “As a pass-rusher, he can be a bit stiff and vertical, but with the right coach, that can quickly be corrected to access his raw ability.”

There’s no doubt that Acheampong could be a player that can make an impact on a CFL roster in quick order. The fact that he’s in this position after playing the game for less than a decade is impressive, to say the least.

All he needs is an opportunity, and he’ll get that chance following the draft. The sky’s the limit for the National product.