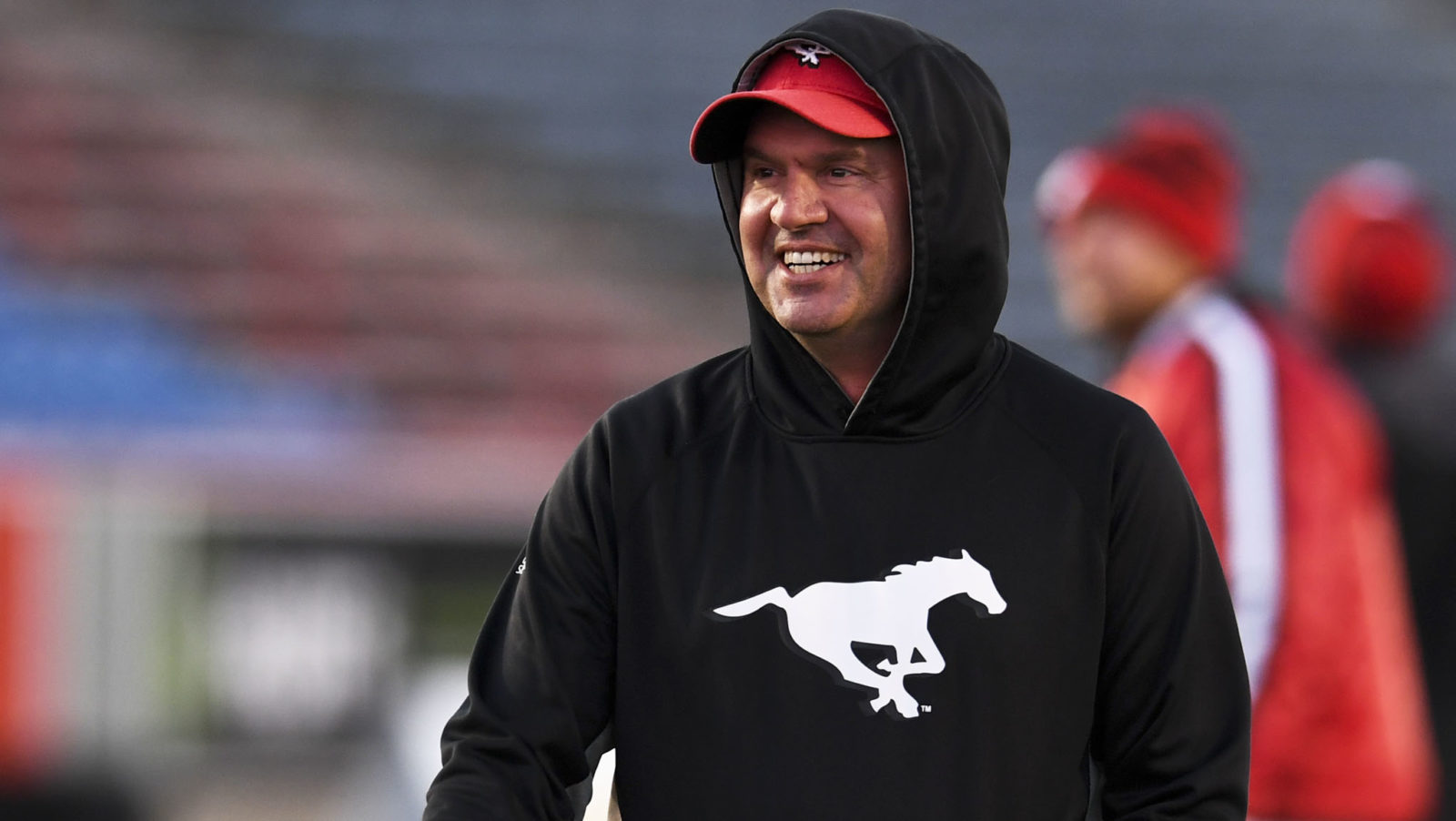 Every professional football coach on the planet will attest there are certain crossroads moments a guy/gal experiences in their career.

And Pete Costanza, the Winnipeg Blue Bombers’ new running backs coach, can list off a couple – one of which he is experiencing right now after leaving the Calgary Stampeders following 12 years of service in southern Alberta.

“It’s definitely already been exciting for me,” began Costanza, currently back in Calgary, in a recent chat with bluebombers.com. “It’s tough right now with the COVID-19 pandemic, but the good thing is as coaches our business means we can still prepare and plan. We’re all just waiting for the ‘Go’ signal.

“But already the change for me has been invigorating. It’s a welcome challenge and it’s good to have a different way to look at the game. The work, being in the office and going over the self-scout with the guys and learning the system is a fresh, new outlook on the CFL and football as a whole and I’ve thoroughly enjoyed it so far.”

Costanza officially joined the Bombers in late January and his addition was somewhat overlooked in the build-up to Canadian Football League free agency. He brings some valuable experience to a coaching staff that will see some changes on the offensive side of the ball, with Buck Pierce the new offensive coordinator and Kevin Bourgoin shifting from running backs to receivers. 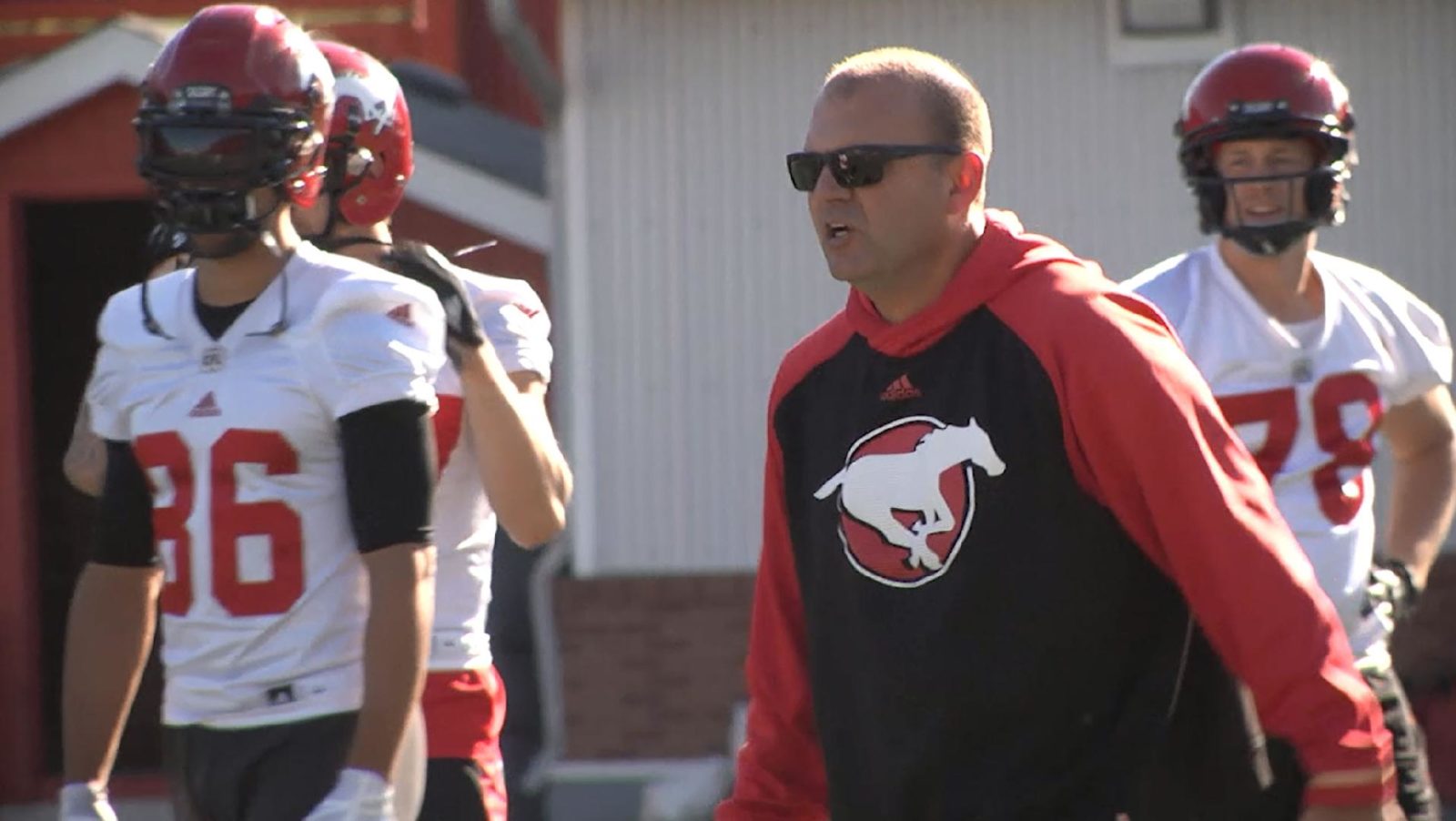 Costanza tutored the likes of Nik Lewis, DaVaris Daniels, Jeremaine Copeland and Reggie Begelton among many others during his days in Calgary, but will shift over to coach running backs.

“The first thing I look at is what stays the same,” said Costanza when asked about the switch. “The foundation for coaching is building an honest and true relationship with your players. Whether you’re coaching receivers, DBs, running backs or whatever, you want to have a genuine relationship with your guys and let them know that you’re there for them and you care about them as people, not just guys wearing a number on game day.

“The change for me, the difference is just going to be about training myself and training my eyes. As a receivers coach I would be more focused on the back end and how the defence is playing in the back end with their DBs and their coverages. Now it’s training my eyes to watching the fronts and what type of fronts and blitzes we’re getting and then helping my guys understand that.”

Costanza said the decision to leave Calgary wasn’t easy – especially as it was Stampeders President and GM John Hufnagel that first helped get him into coaching. But with Stamps head coach Dave Dickenson committed to remaining the offensive coordinator and play caller, he felt he needed a change.

“We all have aspirations of moving up and becoming coordinators and potentially becoming head coaches one day,” said Costanza. “When Buck called me and asked about changing from coaching receivers to running backs I thought it was an amazing opportunity. So many people look at me as a pass-game guy because I’ve coached receivers for 12 years. I do understand the run game and the fronts. Marty has done such a great job with the fronts and the run game that will just help me with my growth.

“Throw in that I’m going to the Grey Cup champs with a bunch of really good guys who are good football coaches and it just seemed like a good fit.”

Costanza first reached out to Bombers head coach Mike O’Shea via e-mail about a possible opportunity in Winnipeg and then it was Pierce who contacted Dickenson in Calgary. 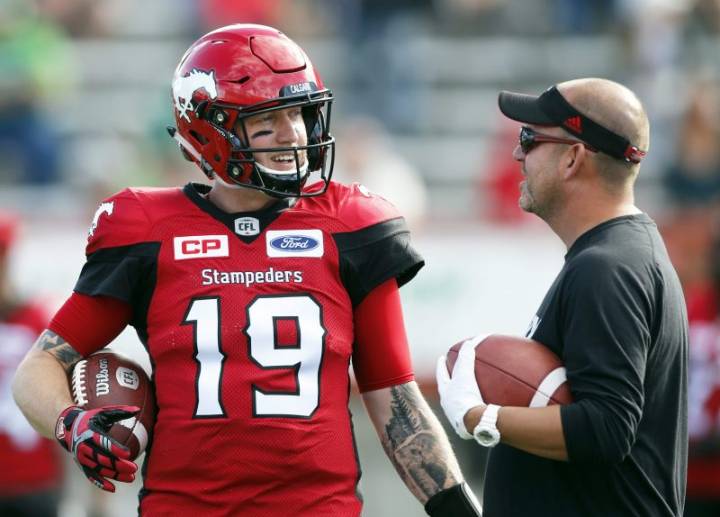 That decision to call the Bombers about a possible opportunity brought Costanza back to another crossroads moment at the very beginning of his coaching career. He had played Division III football for the William Patterson University Pioneers where he had earned a degree in Exercise Physiology/Cardiac Rehab.

An internship at the Cardiac Care Unit at Hackensack Medical Center convinced him that field wasn’t for him and he took a job in corporate fitness as the assistant general manager at a health club.

A few months in that field – the planning, the staff schedules, etc. – was hardly inspiring him either.

“That’s when I had my  ‘Ah-ha!’ lightbulb moment, when I realized I didn’t want to work in business management. I wanted to work with athletes,” he said. “The owner of the arena football team (the New Jersey Red Dogs) happened to work out at our club and one of trainers introduced me to him. He asked if I wanted to play and I told him I was more interested in coaching. He gave me Huff’s cell phone number.

“I sat on whether I should call Huff because he didn’t know me. I mean, imagine… ‘Hey Huff, the owner of your team works out at my gym and he gave me your number. Can I coach football?’ It was definitely a leap of faith and a crossroads moment, but I’m glad it worked out well and I took advantage of the opportunity.”

Costanza and Hufnagel worked together for two years with the Red Dogs. Hufnagel then left for the NFL, while Costanza became the head coach of the Albany Conquest in AF2, working with defensive backs at Rensselaer Polytechnic Institute during the indoor offseason.

When Hufnagel came back to Canada with the Stamps in 2008, he offered Costanza a job and he eagerly followed.

Interestingly, in a small league in which pre-existing relationships can mean everything in moving from one opportunity to another, Costanza did not have any experience working with anyone on the Bombers staff.

But the reputation he built in Calgary did open up the door here in Winnipeg. Now he’s excited to be working with Andrew Harris, Johnny Augustine and Brady Oliveira.

“Andrew does so many things well and has done a lot of good things over his whole career,” said Costanza. “Then you look at Johnny and Brady… they’re all talented in their own rights. Just talking to them, I asked them what they wanted to get better at this year and what they wanted to improve on. It’s our running backs room, but I want them to set the standard of how we’re going to play. And it’s my job to say, ‘Hey, we set this together and it’s my responsibility to hold you guys accountable to playing at this level.’