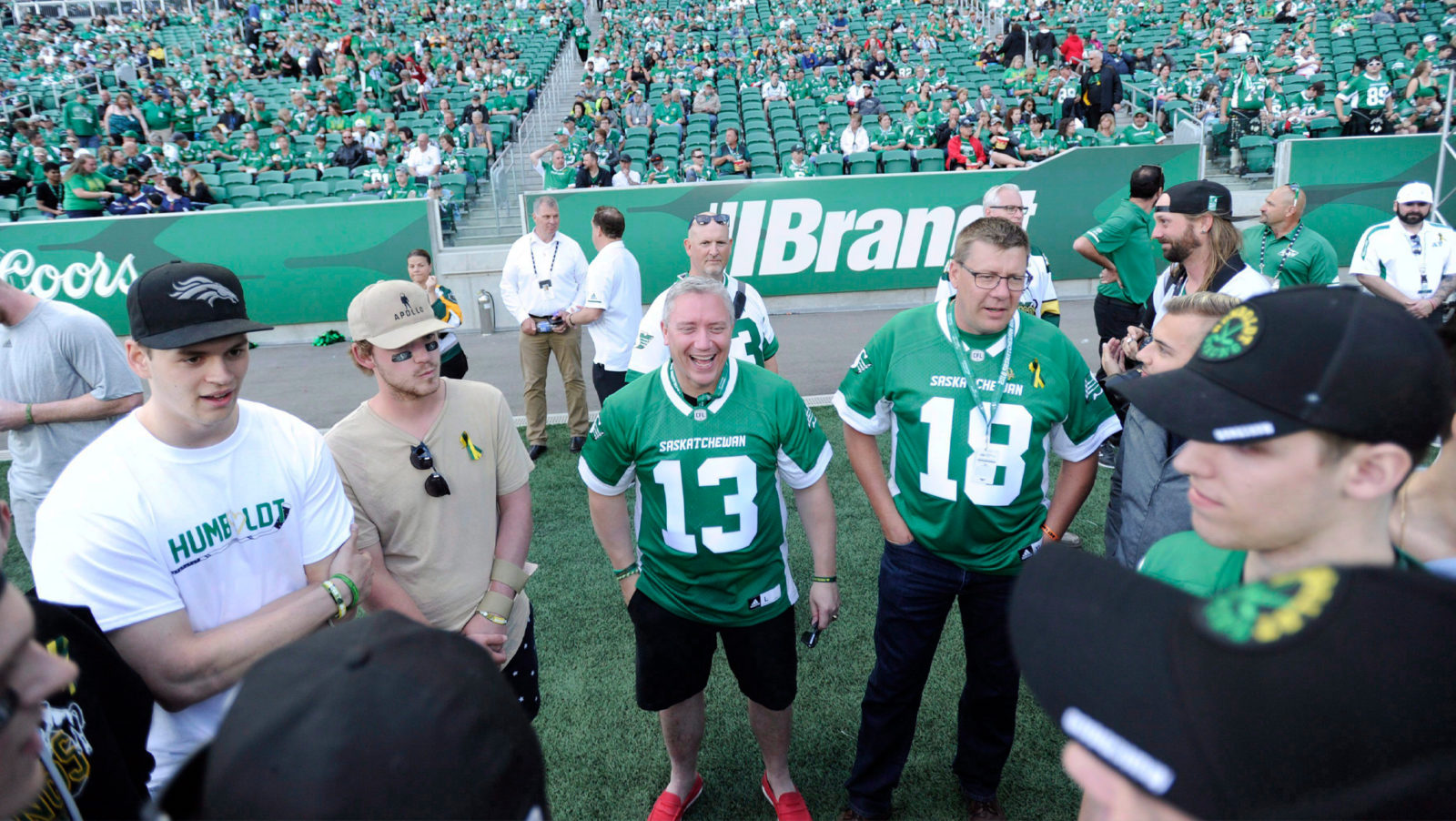 In the middle of a beautiful late June day in Hamilton, I had to shift my attention away from Ticats’ practice for a phone call.

On the other end of the line was David Millette, a vice principal at Humboldt Collegiate Institute. It was the end of the school year and you could hear the relief in his voice. It was more than the standard end of year relief, though. Like everyone in Humboldt, he sounded like he’d been through the ringer over the last few months. It was the school’s graduation day. The wounds of the Humboldt Broncos’ tragic accident, two years ago to the day on Monday, were still very fresh. What the end of the school year may have failed to bring in closure, it was something that pulled the community forward and onward.

Another moment lay ahead in that journey for Humboldt, the province of Saskatchewan and in many ways, the country as a whole. The accident reached so many people for so many reasons. For some it was the idyllic Canadian picture of young hockey players on a bus, traipsing across the prairies to play their next game, suddenly shattered.

For others, it was that the accident was so relevant, so easy to link to your own memories of team travel, or to think about your children, your nieces and nephews that travel with their teams. If you played sports at any level as a teen you were probably on a bus just like that one, or sardined into a 15-passenger van, covering hundreds of kilometres in a 36-hour window for a weekend tournament. In seeing the tragedy unfold, we realized with it that it could have been so many of us at one point or another in our lives.

My flight touched down in Regina the morning after I spoke with Millet. That buzz of a Riders home game was in the air, but it felt different. I walked through the concourse of Mosaic Stadium after the Riders’ walkthrough and saw the Broncos’ jerseys selling in the Riders’ team store. On game day, Broncos’ president Kevin Garinger met with the media outside of the stadium a few hours before kickoff. The 13th man statue towered over us, wearing a giant custom-made Broncos jersey.

The Riders hosted about 200 people from Humboldt for the game, finding a way to represent each of the affected families. There were survivors, parents, siblings, friends. The 29-yard line was marked with a ribbon, for the 29 lives lost in the crash.

Brandon Bieber was one of the 200 there. His brother, Tyler, was the radio voice of the team and a massively committed coach in Humboldt for multiple sports. He loved football and the Riders. More than anything, Brandon would tell me, Tyler loved helping out. There are around 6,000 people in Humboldt and in his short 29 years, it seemed like Tyler wanted to connect with all of them.

Brandon told me that he’d gotten a portrait of Tyler tattooed on his back. With it, he felt like he brought his brother everywhere he went with him. Before the game he looked up and saw a rainbow in the sky.

“Those little signs that tell you that someone’s there and they’re watching over you,” he said. 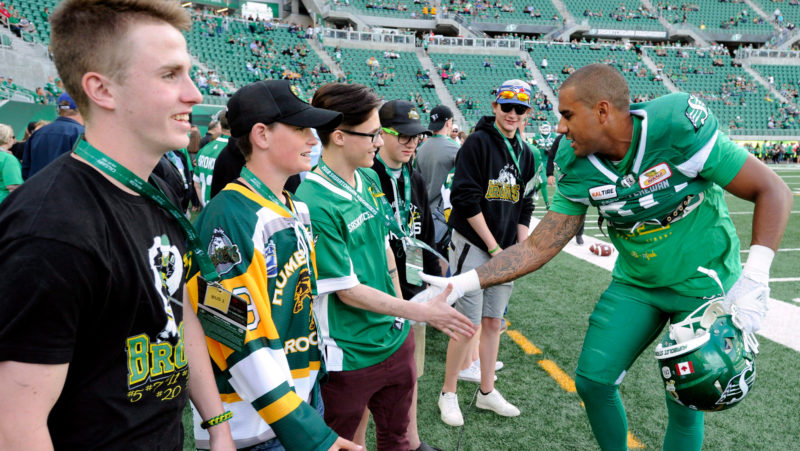 The Humboldt Broncos and members of the community were the stars of the show on Canada Day weekend, 2018 (Photo: The Canadian Press)

Under that rainbow in the sky, 33,308 fans stood in silence and paid tribute to the Broncos and the community. There’s power in numbers like that, in gestures that genuine. Looking back on it now, given where we’re at, it feels even more significant. Mosaic Stadium is the biggest gathering place in the province of Saskatchewan. It felt like the entire province was there together.

“There is so much power in coming together and being physically present with each other,” Millette said. He drove 2.5 hours to be at the game with his family that day.

“Whether it be at the game or seeing someone downtown or at a church, at graduation, there’s a lot of strength that comes from that togetherness, absolutely. We’re grateful for the CFL and the Riders to open their doors to helping us heal and doing what they can to support our community.”

The pre-game and the game itself felt like two separate events. The Riders fell to an underdog Alouettes team, giving them one of just five wins they’d get in 2018. The two parts of the night were still woven together, even if the finished product felt mismatched. In its own flawed way, it was perfectly telling. At our lowest points, when it feels like time has stopped, things continue to move forward and life pulls us along with it whether we want it to or not.

“I don’t think there’s ever closure on these things, to be honest with you,” Garinger said that day outside of the stadium.

“This is just another part of the journey to healing. Everyone’s on a different place in that path. At this point it’s a matter of continuing with whatever needs to happen that way. We’re blessed to have this opportunity here in Regina, together to really continue on that journey.”