Rysen up: SFU product set to do damage in CFL 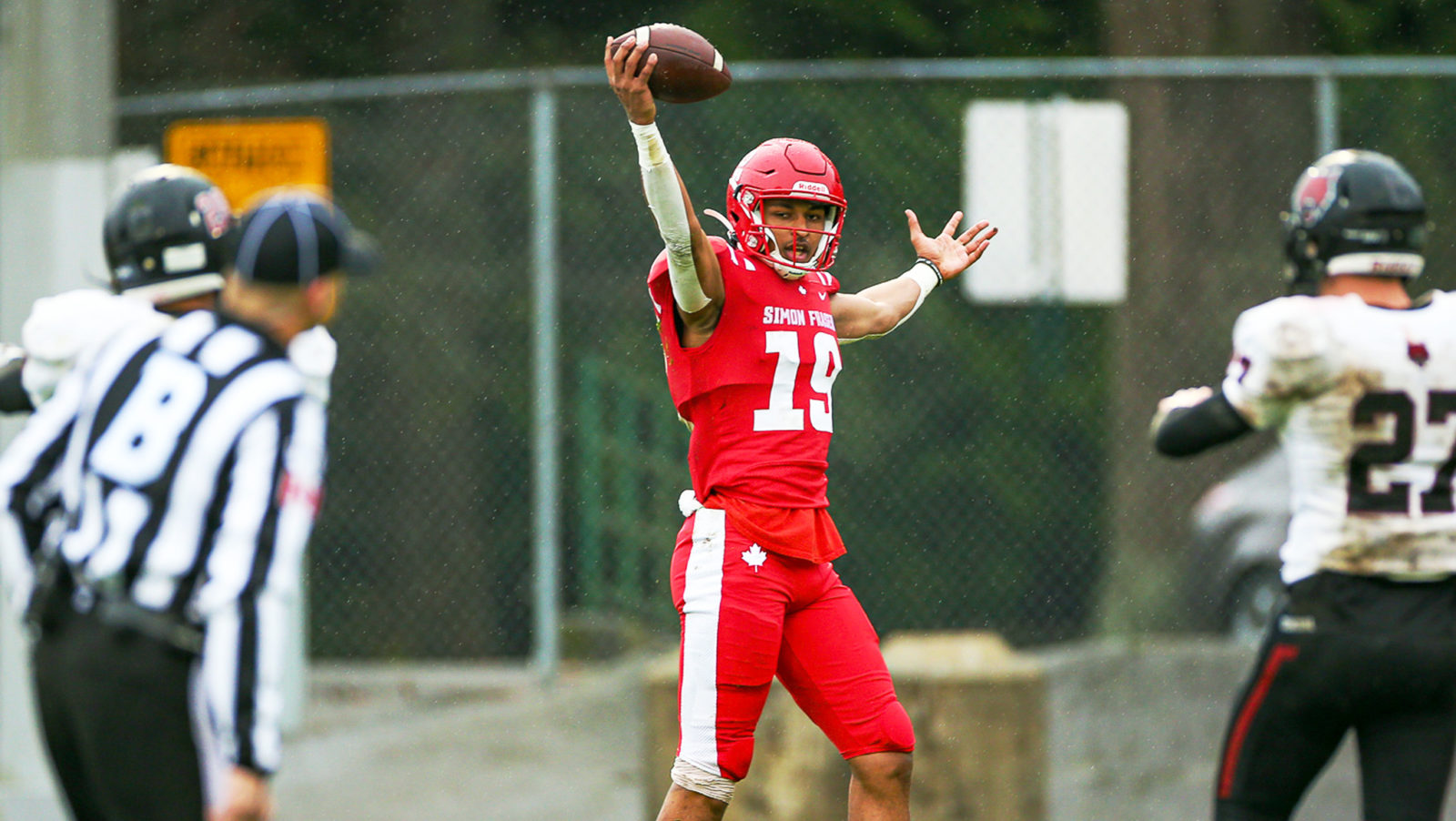 Rysen up: SFU product set to do damage in CFL

Rysen John’s mother was watching Super Bowl 31 in 1997, which saw the Green Bay Packers and New England Patriots go toe to toe. While she was taking the game in, Packers receiver Andre Rison caught her attention. She made the decision that she would name her son after the Super Bowl and Grey Cup champion.

Little did she know that her son would grow up to become a prominent pass-catching prospect in his own respect.

John didn’t have to go far from home to get his chance to play high-level football. The receiver from Vancouver, BC., has been an imposing force for the Simon Fraser Clan over the past four years, and now, he’s ready to take the next step to the pro level. He’s one of the top options available on the offensive side of the ball in the 2020 CFL Draft. 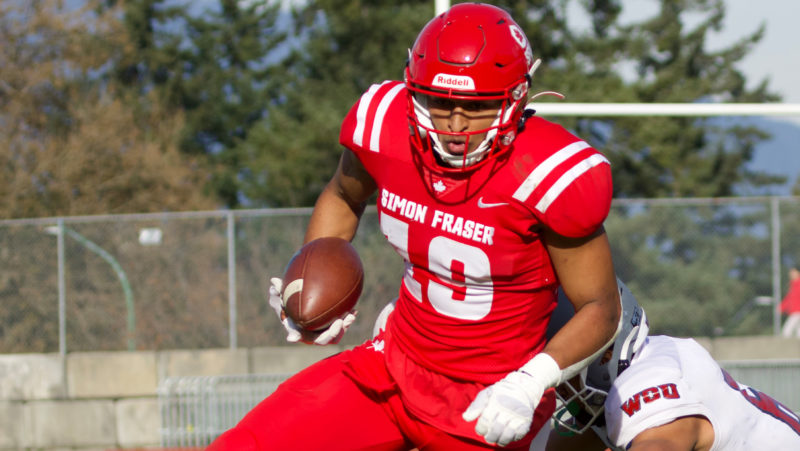 John grew up playing basketball and football as a kid. He watched sports — mainly football — on TV and ended up falling in love with the sport.

He stuck with it because it offered the ability to have more opportunity to make a team with the increased roster sizes. He also hit a growth spurt throughout high school, and at receiver, he believed he could be a problem for opposing defences.

“I might have been like 6-foot-2 at the beginning of grade nine,” John said. “And then gradually every summer, I was growing pretty fast. I think around my junior year, I was like 6-foot-5 as well. I just stopped growing at 6-foot-7 my senior year.”

Coming out of Vancouver College, John had several U SPORTS programs after him during the recruiting process. He had a number of OUA programs come out West to speak to him and his family as well as official visits with Manitoba and Saskatchewan. In the end, he chose to stay close to home.

He joined Simon Fraser University in Burnaby, BC., which boasts an NCAA Division II program. He was initially planning on redshirting his opening year in college, however, he opted to play, and was able to make it into some games for the Clan as a result.

“I just came into camp trying to get that year just hoping to play and hoping to get that playing time,” John said. “But at the same time, I was trying to be realistic and know that it might take some time out to get my body used to the hits, the practices and the physicality against the guys that I’ve seen on the practice field and in-game as well.”

John made it into five games as a freshman, hauling in five catches for 65 yards and a touchdown.

He’d continue to grow his role with the team as the years went on. As a sophomore, John upped all the totals from the previous season, finishing the 2017 season with 290 yards and three touchdowns on 23 catches in seven outings.

2018 proved to be the breakout year for the tall target. John appeared in eight games for Simon Fraser, making 36 grabs for 524 yards and six touchdowns while averaging 14.5 yards a catch.

“Whenever I was open or whenever I had the chance to make a play for offence, I made it happen, and if we got towards the red zone or were trying to get any points. But I definitely benefitted from the quarterback play.”

In his final season at SFU, John was a beast for the Clan. He finished with 53 catches to go along with 861 yards and 10 touchdowns. He led his conference in all of those respects. His biggest performance of the year came against Western Oregon, where John had 11 grabs for 171 yards and a score.

For his efforts, he earned First-Team All-GNAC honours. John was also named the team’s 2019 MVP and Offensive Player of the Year.

The 2019 output drew looks from scouts around North America. He was invited down to the 2020 Hula Bowl in Hawaii. The resurrected event showcased some of the best talent from around the NCAA, including John, who was the lone invite to hail from north of the border.

Because of his build, teams wanted to get a look at what John could do at the tight end position as well as receiver during the lead up to the Hula Bowl.

“Obviously, you can’t ever complain about a free trip to Hawaii,” John joked. “Having the chance to represent Canada in that game, to me, I felt really blessed being there. By having to practice both wide receiver and tight end, things were challenging for me. But I was willing to do anything on the field to get that playing time.

“I had the same type of mindset and effort that I had back at SFU. So being in that game was definitely a blessing.”

He did a virtual pro day for scouts on Tuesday and impressed in several different facets. He was able to run a 4.6 40-yard dash while hitting 13 reps on the bench. Additionally, he had a nearly-seven-foot-long wingspan and a 32.5-inch vertical jump. With that kind of catch radius and running ability, he’ll be a threat for any team that gives him a look in the draft.

This entire process has given John some extra confidence that he’s among the top receivers in the nation that will be available in this draft class. Over the last few months, he’s been able to pick the brains of former SFU alumnus to get an idea of how the next few months will go for him. He’s talked to former teammates Justin and Jordan Herdman-Reed, as well as BC Lions pass-catcher Lemar Durant to get some advice.

As for paying attention to the rankings and mock drafts heading into the process, he admitted he checked out one, but for the most part, John has tried his best to steer clear ahead of draft day.

In his first mock draft, CFL.ca’s Marshall Ferguson has pegged John to go 22nd overall to the Montreal Alouettes.

“Rysen John is every bit of his 6-foot-7, 220-pound frame,” Ferguson said. “He has elite, freaky size and plays the ball similarly to former Western Mustang George Johnson, whom Montreal has been patient in developing.”

John is a modern-day matchup nightmare in the passing game. If a ball is thrown up for him to go and get, he’s coming down with the catch more times than not, and while most defensive backs will have a speed advantage on him, if he’s able to get separation, that added height will prove to be an issue for a man in coverage. In a game this past season, he was able to high-point a ball in triple coverage and get his feet down in the back of the end zone for a major.

While the ability to go up and grab jump balls on the sideline is something that will have teams salivating, John also shows off sure hands in tight spaces and can serve as a threat in the middle of the field as well.

He grew up looking at receivers like Brandon Marshall and Terrell Owens for inspiration, but he also looks at current-day tight ends like Zach Ertz and Travis Kelce for ideas on how to improve his game.

In an off-season that has been like no other, John is back home in Vancouver, doing his best to stay in shape for what comes next. The 2020 CFL Draft will take place on April 30, where John will likely be one of the first receivers to hear his name called.

In just a few weeks time, he’ll go from promising college prospect to professional athlete, a transition that the National product seems more than ready for.

“The days are starting to inch away, they’re starting to count down a little bit towards the draft. Once your name is called and you sign that contract, you’re a professional athlete,” John said. “You’re going to be treated differently and you have to act a certain way to the community and the people who loved and supported you for a long time. It’s definitely going to be different for sure.

“When you get that phone call and a team tells you that they really love picking you up and are going to give you that chance to make a difference, it’s really going to be a good time for me and my family. I’m kind of letting God do his work today and until then so we’ll see what happens.”