Kayden Johnson is not your typical running back.

Standing at six-foot-three and 223 pounds, the Kerrobert, Sask. native is one of the most accomplished rushers in York University history, going into the record books in several different rushing categories.

Along with being an integral part of the Lions’ offence over the past four years, Johnson has also had an accomplished track and field career and has dreams of one day featuring on the silver screen.

For now, however, his sole focus is on football and the 2020 CFL Draft, where he stands as one of the top talents available at his position. 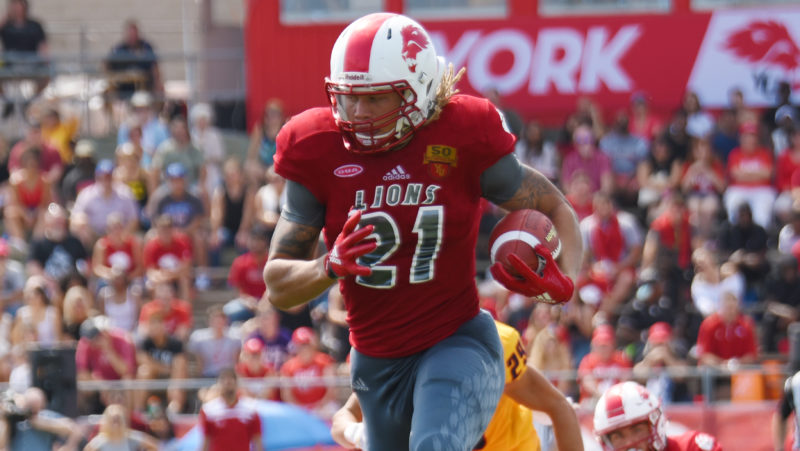 Johnson comes from an athletic family. His father, Winchester, was a decathlete who was able to represent his country as the Masters level. In 1992, he won the senior men’s national championship. His mother, Angy, played basketball and soccer during her time at the University of Saskatchewan. She also represented the province in hockey at the 1989 national championships.

Johnson has been a late bloomer of sorts in the sport. He followed in his father’s footsteps in his younger years, competing in both the decathlon and heptathlon. He finally gave football a shot in grade seven. Once he made it to high school, he was coached by former Ottawa Rough Riders offensive lineman Al Neufeld.

Because of his athletic background, running back was a natural fit for the startup player, although he did play some safety and receiver in high school as well.

Johnson was able to play for Team Saskatchewan at the 2013 Canada Cup before moving on to represent Canada at back-to-back International Bowls in Arlington, Texas in 2014 and 2015, respectively.

All the while, he was still doing track, where he was also a standout. Johnson was able to don the maple leaf in 2015 when he participated at the Pan American Junior Games in Edmonton. He finished fifth in the decathlon.

“That was unbelievable. It was always a huge dream of mine to represent Canada in track and field,” Johnson said. “It was amazing to be able to go out there and compete and also compete against other world-class athletes and watch athletes who have now taken the stage in track and field, like Christian Coleman and Noah Lyles.”

On the gridiron, Johnson was opening eyes. Teams were starting to pay attention to the talented back. He had the opportunity to decide where he wanted to continue his football career in college and he wasn’t short on suitors.

“I had a chance to go and visit a bunch of Canadian schools at the time. It was a great opportunity to see what campuses and programs had to offer,” Johnson said.

He ultimately landed close to home, committing to play his ball at the University of Saskatchewan.

After red shirting his first year, he decided to make a change. A move out East to Toronto, Ont., and York University was what Johnson ultimately landed on. The fit was perfect for him, as he’d played under York head coach Warren Craney and then associate offensive coordinator Kamau Peterson while with the Canadian national team. He was also close with the track coaches with the Lions.

“It felt the most comfortable and opportune for me,” Johnson said of the change of scenery. “That past experience and bond that I had created just playing with the national team and having coach Craney and coach Peterson being able to mentor me along with the other players, I really felt like I had a good connection and an established relationship with both the coaches and the players.”

He didn’t have to wait long to make an impact on the field for York, slotting directly into the lineup during his first season with the program. He appeared in all eight games in his inaugural season in 2016, starting in five of those contests. He ran the ball 85 times for 489 yards and a pair of touchdowns while adding 160 yards and another score on 11 receptions.

In his first taste of the annual Argo Cup game, Johnson had the best game of his collegiate career, rushing for 207 yards on 32 carries, setting a new single-game Red & Blue Bowl record.

2018 saw Johnson have a career-high 102 rushing attempts. He turned that into 432 yards and a career-high four scores. He also added 146 yards on 15 catches.

He built this solid career in football while also focusing on classes and being a staple with the Lions’ track and field team. Johnson was named the school’s male athlete of the year in 2018 after taking home the gold medal at both the OUA and U SPORTS championship in the 60-metre hurdles. He was also named an OUA All-Star and U SPORTS All-Canadian for his efforts.

To add to the accolades in track and field, Johnson also won a silver medal at the 2017 OUA championships in the heptathlon while also being named an OUA second-team All-Star. 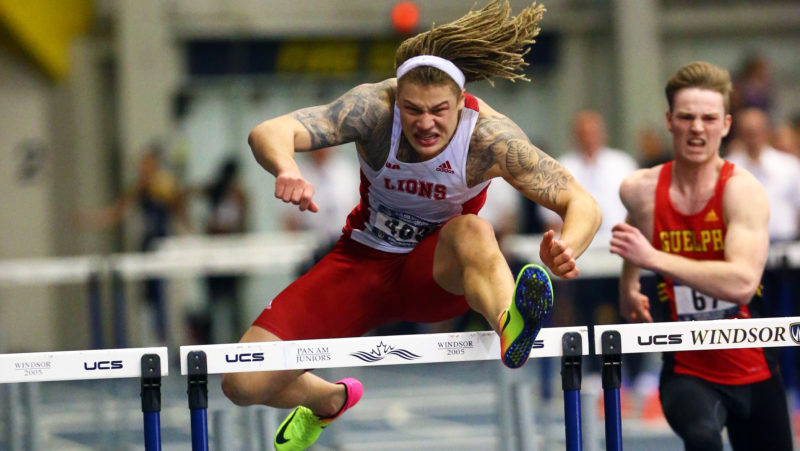 Johnson’s collegiate career came to an end in 2019. Because of injury trouble, he featured in just one game for York. He rushed six times and had three catches for 26 all-purpose yards against Guelph.

He finished his classes and had a familiar face join him on campus, as his brother Kolby started his first year at York, playing for the school’s hockey team.

“We haven’t lived together since we were teenagers. So for us to have this year together and for me to be able to show him the ropes in his first year has been a great time,” Johnson said. “We’re just cherishing every moment and trying to be beasts in the weight room and on our teams. He makes Toronto feel even more comfortable.”

Along with being a multi-sport standout during his collegiate career, he’s focused on a major that has an eye on life following his football career.

Johnson is a theatre major at York. He had grown up with an interest in the silver screen and had been involved with drama and theatre throughout high school.

“Ever since I was a kid, I just loved watching movies,” Johnson said. “I loved figuring out how they’re made, the costumes, the lighting and all the different thematic techniques. It’s always been a passion of mine. I really enjoyed acting and even just role-playing and going out and using my imagination in the world.”

He’s been cracking the books both on and off the field. He’s had to learn the various nuances of a football playbook during his time with the Lions. With that, Johnson has had the chance to perform in various productions that the program has put on over the years, including Angels in America and Moss Park.

So what’s harder? Memorizing a playbook or a script?

“The script is harder,” Johnson laughed. “With the playbook, I can catch onto that pretty easily and there’s also the opportunity to go through the plays myself. A script is a much bigger book with specific lines and cues with the person I’m with in the scene.”

Football is still the primary for Johnson, but he’s set himself up to go into acting once he’s decided to hang up the cleats for good. He’s comfortable in any role or genre, but he does skew towards action movies more than anything else.

“Specifically superhero (movies). I could see myself being a superhero in a movie,” Johnson said. “Even being a villain, I wouldn’t be opposed to that. Just those powerful and engaging roles are ones that I’d like to do, as well as bringing my imagination when it comes to all the CGI and green screen. I’d really like to bring that to life.”

Seeing him out on the field, it’s not hard to picture Johnson being in an action flick in the future. With his physical build and sprinting prowess, he’s able to be a threat in the power or speed game when he gets the ball in his hands.

He likes to model his game after Derrick Henry, the hulking rusher for the Tennessee Titans who lit the NFL on fire with his dominance while pounding the rock in 2019. If he comes even remotely close to the success that Henry is currently finding, a CFL squad is going to be very happy to snatch Johnson up in the draft to bolster their run game.

Johnson looks to be one of the first running backs that will come off the board in the draft. The landscape in the CFL when it comes to running back still skews American for starters, though a few Canadians — Andrew Harris, Jerome Messam and Jon Cornish — have shown the benefits of having a national at the position over the last decade.

As any coach in the CFL will tell you, they’re going to put the best player on the field.

Because he was only able to play in a single game this past season, Johnson becomes one of the most intriguing prospects in this entire class.

There’s a chance that Johnson could partner with another promising young Canadian running back in Hamilton, in Sean Thomas-Erlington. In his first mock draft, CFL.ca’s Marshall Ferguson pegged Johnson to land with the Tabbies in the third round, 27th overall.

“Kayden Johnson is one of, if not the most interesting physical talents in the 2020 draft class,” Ferguson said. “His natural size combined with elite track speed is special and when put in pads, he looks every bit the part of a CFL ball carrier.

“Kayden will have to prove himself as a student of the game to make an impact, but physically, he’s already there.”

Johnson is still in Toronto with Kolby, as the younger Johnson brother finishes up his semester. Once classes are finished, they’re planning on trying to head home. In the meantime, he’s been able to talk with some teams virtually while he prepares for his chance to finally become a professional football player. It’s been over a decade in the making, but this multi-talented athlete is ready for the opportunity to crack a CFL lineup this season.

“I want to progress my football IQ and get that experience at the next level to help the team because I want to win a Grey Cup or a Super Bowl,” Johnson said. “I want to experience that with a team and get into camp and see what I can do. What I want to do the most is make an impact.

“It’s been a lifelong dream of mine and I’m really excited. I’d say it’s more exciting than anything because I can’t wait to finally get a chance to live out that dream.”