Dheilly looking forward to proving himself at next level

Dheilly looking forward to proving himself at next level

Nicholas Dheilly was drawn to the game of football at a young age because of the competitive nature of the sport. He stuck with it because of the ability for a player to hone in on their craft and make something of themselves through both individual and team success.

That passion to be the best has vaulted him into being one of the best graduating defensive linemen that the country has to offer.

It was a long road for the pass-rusher, as he played at two universities as well as the Canadian Junior Football League. After playing for the Regina Rams and Saskatchewan Huskies during his U SPORTS career, Dheilly is set to take the next step, as he’s ready to be one of the top names off the board at his position in the 2020 CFL Draft.

RELATED
» Dual-sport athlete Johnsons wants to be next great Canadian RB
» Rysen Up: SFU product set to do damage in CFL
» Bennett hopes to bring sack king act to CFL 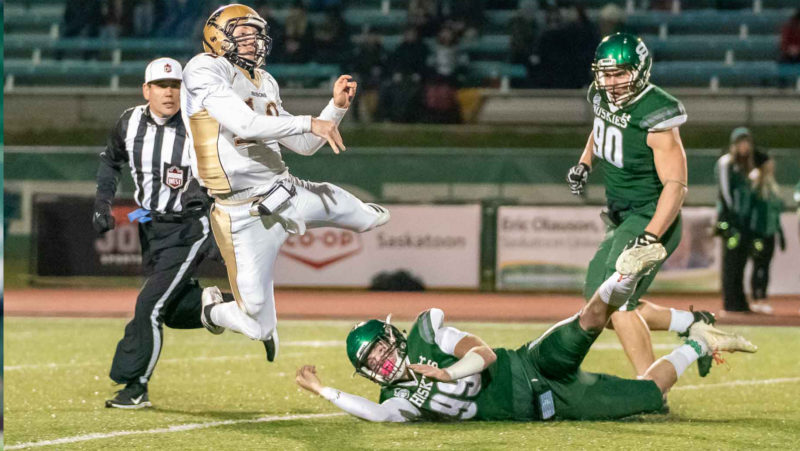 University of Saskatchewan defensive lineman Nicholas Dheilly (99) attempts to block a punt against Manitoba. (Courtesy: Get My Photo)

The Regina, Sask., native began his football journey as a safety, playing the position throughout his peewee, bantam and atom days. As he continued to grow, his defensive assignments changed. He transitioned to linebacker in high school before hitting a major growth spurt before his grade 10 year. Dheilly shot up to 6-foot-5, signalling another move, this time to the defensive line.

Dheilly was a standout during his high school career. He earned a spot on both Team Saskatchewan and Team Canada, winning a silver medal with the former and featuring with the latter in 2015.

“It was kind of like a little farm team we had going from our high school to Regina. It was just way more comfortable playing back home,” Dheilly said. “We had eight guys starting on offence and defence and then our defensive coordinator was there as well.”

His U SPORTS career got off to a fantastic start, as Dheilly finished the year with 30 tackles, 7.5 tackles for loss, four sacks, one interception and two passes defended while featuring in eight games for the Rams. His breakout game came in a win against the Calgary Dinos, where Dheilly racked up three sacks in a victory over the eventual Hardy Cup and Mitchell Bowl champions.

He earned 2016 Canada West Rookie of the Year and University of Regina’s Male Athlete of the Year honours for his efforts.

In his second year, Dheilly continued his dominance in the trenches, tallying 26 tackles, 9.5 tackles for loss, 6.5 sacks, three forced fumbles and a fumble recovery in seven outings. That helped him to a Canada West All-Star nomination for the first time in his career.

He also had his younger brother, Noah, join the team in 2017.

“It was nice to have him out there. Just having your brother with you and going up against him on offence and seeing him go around, it was cool,” Dheilly said. “Also having Dominique, my youngest brother, commit there was pretty awesome. Having brothers and family in football makes it that much better.”

Dominique is a receiver and is getting ready to start his first season with the Rams.

Dheilly held himself to a high standard, and following two stellar years with Regina, he wanted to push himself further and decided to make a change to another program.

He had to take a year off because of the U SPORTS transfer rules before moving on to a new school. Dheilly joined the Okanagan Sun of the CJFL as a result. He played in just three games during his time with the team, but he posted a ridiculous 15 tackles, 13 tackles for loss and eight sacks to go along with a forced fumble over that span.

“It was nice to get away from home and grow up on your own. Okanagan was a place where I grew up tremendously as an adult, so it was nice to go there,” Dheilly said of the experience. “It really taught me to just deal with the scenario of not being able to play in U SPORTS. But it really gave me that motivation and drive to come back and really helped me figure out who I was.”

Ultimately, Dheilly decided to join Saskatchewan for his third year. It was business as usual for him, as he put up 24 tackles, 11 tackles for a loss, six sacks and an interception while featuring in 10 games — including playoffs — this past season.

Not only was he able to feature with a program that made it all the way to the Hardy Cup Final this year, but he also was able to go up against one of the best offensive lines in all of U SPORTS every day in practice.

Saskatchewan had two conference All-Stars on their roster in 2019, guard Mattland Riley and centre Connor Bergloff.

Those battles ahead of games undoubtedly helped both Riley and Dheilly for the better and helped them prepare for what’s to come in the pros, as both are slated to be some of the top-ranked players at their respective positions.

“We were actually locker buddies when I came in so we were kind of forced to meet each other and know each other right away, Dheilly said. “Mattland is a really, really great guy. He’s down to earth, really professional with everything he does and he’s an engineer, so he’s very smart. He can be a really energetic and goofy kind of guy so it was really fun to (go against him) and just see him from his own aspect.

“He such a different guy than I am, but going up against each other and practicing together just made us so much better. It wasn’t just Mattland, though. It was just a great offensive line from top to bottom.

“I’ve never seen so many fights in practice. Because we were so competitive, it was like a game every day against those guys.”

From his first day on campus to now, Dheilly believes his mental maturity has progressed the most. He was one of the statistical leaders on defence from both Regina and Saskatchewan during his U SPORTS career, but he was also a notable voice in the locker room.

“I think just being a young kid and starting right away, you kind of think you’re the man and everything. But as time went on, you learn to humble yourself and you learn to look around and see what’s actually more important in your life,” Dheilly said. “I just put my foot the ground and just really tried competing against myself. I was always trying to compete against others and that was just not the right thing.

“Competing against myself was what I did and in the last few years I really think it’s upped my game. And just growing up as a human being, growing up as a man. It’s been really awesome. Football can teach you a lot of things.”

Dheilly models his game after reigning Most Outstanding Defensive Player Willie Jefferson, due to their builds as defensive linemen. He does see himself fitting as a hybrid linebacker and edge rusher at the next level due to his speed and ability to track down the ball. He likes the idea of being a Swiss Army Knife on defence, like Jefferson.

Having experienced the game from all three levels of the defensive side, Dheilly can bring a lot to the table for a CFL team in the draft.

When asked about how he’d explain his game, Dheilly just used one word.

“Speed,” he said. “Speed kills. I might be undersized as a lineman but my speed around the edge is crazy.”

In his first mock draft, CFL.ca’s Marshall Ferguson had Dheilly coming off the board in the second round, landing with the defending champion Winnipeg Blue Bombers with the 18th overall pick.

“Dheilly is an interesting hybrid type,” Ferguson said. “A bit light at this point in his physical development to set an edge, he will likely be asked to play a primarily special teams role early on to access his length.

“For Dheilly it’s all about finding a team that has a fit for his unique skill set, likely landing him as a backup weak-side linebacker to begin.”

In under two week’s time, Dheilly has the chance to be a professional football player, something he’s been working toward for over half his life. Once his name gets called, that’s when the real work starts, as the promising defender tries to get a foothold on a roster of the team that selects him.

“It’s coming to a point where this actually might happen, but at the same time, you never know so you’ve just got to keep grinding,” Dheilly said. “For me, it hasn’t happened ’til it’s happened. When you get drafted to a team and sign on, you’ve still got to go to camp and prove yourself. So nothing is guaranteed after you get drafted, but it will be a relief.

“It’ll be a weight off my shoulders that these past four years of school and four years of high school have paid off. At the end of the day, you just have to figure out where you’re going and get back to work.”