In this time of isolation, a handful of Toronto Argonauts fans found a way to safely see one another and reconnect while reliving some of their team’s best moments from the last decade.

The team arranged a watch party for about 50 season ticket holders on Friday night, lining up with TSN’s re-airing of the 2012 and 2017 Grey Cup games. Since TSN billed it as Ricky Ray night, the man himself joined the call from his home in Redding, California.

Ray was one of four guests on the night. Scott Milanovich, the head coach of that 2012 team, d-lineman Ricky Foley and fullback Jeff Johnson also called into the show to share their memories of that season and what it was like to win the 100th Grey Cup on home soil in Toronto.

Mike Hogan, the Argos’ radio voice and comms manager, hosted the night and provided tremendous background and details to essentially every facet of the game.

Of course, when you think back to the 2012 season, you think of how the team acquired Ricky Ray in December of 2011. It was a blockbuster trade that put the Argos on a new trajectory, just in time for the team and the city of Toronto to play host to the 100th Grey Cup.

“I was pretty surprised by it when I got the call from (then-Esks head coach) Kavis Reed in the second week of December,” Ray recalled.

“I was driving with my wife and she answered the phone and she said it was Kavis and he wanted to talk to me. I pulled over and he informed me that I was being traded to Toronto. I think that was on a Sunday and I think I was in Toronto by Tuesday doing a press conference and back home by Wednesday. It all happened quickly.

“It was definitely a shock and surprise and it took some time to let everything settle in and realize I was heading out east to Toronto. I’m glad, it all worked out great. I got a second start to my career, got to refresh myself and play on two more championship teams. I’m definitely glad I got the opportunity to play in Toronto.” 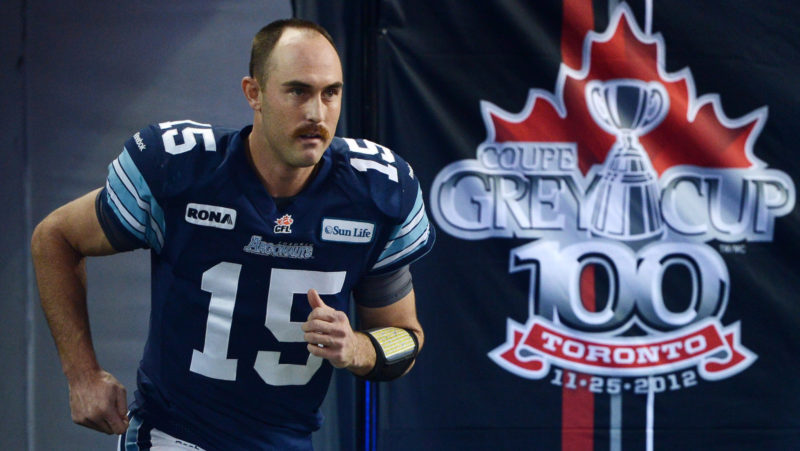 The trade to Toronto was an unexpected twist, but Ricky Ray got a storybook ending to the 2012 season

Ray also addressed a rare moment of emotion shown on the field from that season. With the Argos throttling the Esks in the East semifinal, Ray ran in for a touchdown and possibly for the first time at least in his CFL career, he spiked the ball between his legs in celebration. It was the highlight of a CFL-record 31-point second quarter and a dominant playoff-opening win.

“I was excited I guess,” Ray said, laughing at the memory. “I don’t often get to run for a touchdown. I’m not the quickest guy.

“We had such an awesome quarter. To score before halftime and cement that quarter for us, it was an exciting time. It was my old team and I hadn’t beat them in the regular-season and I was able to give us a bigger lead going into halftime. I was pretty pumped.”

“It was a holy sh– moment,” Johnson said of the trade.

“I was shocked that the Eskimos organization would even consider a move like that. I texted Rammer (then-Esks o-lineman Bryan Ramsay) right away and I said, ‘Are you kidding me? Is this real?’

“My phone rang and it was him calling me. It was a shock to them too. The first thing he said about Ricky was he was a guy that he’s going to blame himself first before everyone else on every single play.”

Johnson relayed a story Ramsay told him from Edmonton where in a game he’d missed a block that led to Ray taking a big hit. All that Ray said in the huddle was that he should have gotten rid of the ball sooner.

Milanovich said there was a lot that came together at the right time with that team. Ray had been injured earlier in the season and really hit his stride as the schedule came to its end. They made a change at running back, letting Cory Boyd go in favour of Chad Kackert, who of course went on to be the Grey Cup MVP. Then they had the league’s MOP that year, in Chad Owens.

Milanovich said the coaching staff he had that year was the best one he’s been a part of. The roots of that coaching tree run deep in the CFL, through to today. Chris Jones, Jason Maas, Orlondo Steinauer and Mike O’Shea have all gone on to be head coaches. Steve McAdoo and Jason Shivers became offensive and defensive coordinators. Jarious Jackson was a backup quarterback on that team, but was also on the verge of starting his coaching career. He was hired as the Argos’ offensive coordinator in December for the 2020 season.

“It was an amazing staff. People forget that Jason Shivers is a DC now. McAdoo could be a head coach, easily. It was a great crew,” Milanovich said.

“I didn’t know O’Sh and Orlondo, they were holdovers from Jim (Barker’s) staff but they’re two of my best friends and two guys I couldn’t have any more respect for.” 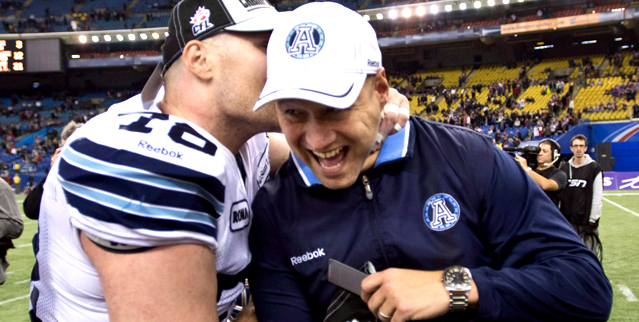 Foley gave a great insight to the game and how the Argos’ defence was able to limit the run game. They found a tendency in an opponent and took advantage of it.

“J’Michael Deane. We knew it was run every single time,” Foley said of the Calgary o-lineman.

“We knew by his stance, by his back foot or his hand on his knee. We figured that out. It was me Flem (Ronald Flemons), (Kevin) Huntley…just a few of us in the middle of the afternoon.

“Chris Jones would spend an entire night looking for tips like that. Almost every week we’d have something. Sometimes it would pan out during the game and sometimes teams would change it. But we knew (the play would be a) run every single time.”

At a time when the sports world simply isn’t happening, it was nice to dip back into history and look at a special team with a group of passionate fans. Wes, an Argos season ticket holder for an incredible 64 years, gave some words of encouragement from his home to the rest of the viewers.

He told the group that this predicament is a short-term thing and that as long as we all do our part now, it would pass and that everything would be all right. We’ll be back watching football collectively, screen-free, as soon as possible.