WINNIPEG — He looked lost, like he was searching for someone or something. That’s what struck me in the moment while watching Richie Hall crying in the end zone at McMahon Stadium following the Winnipeg Blue Bombers’ Grey Cup victory last November.

It was a bit unnerving at first, and I can remember thinking that someone should check on the Bombers defensive coordinator, or maybe just throw an arm around his shoulder.

But we were all so engrossed in doing our thing in those frenetic moments after a 28-year championship drought had been broken, and my thing was to stay in the media scrum with a Bombers player and do my job.

And when I looked back a minute later, Hall was out of sight. I spotted him later in the raucous Bombers locker room, a size-large grin on his face as he soaked in the scene as players doused each other with champagne and did the nutty things every team does after winning a championship. 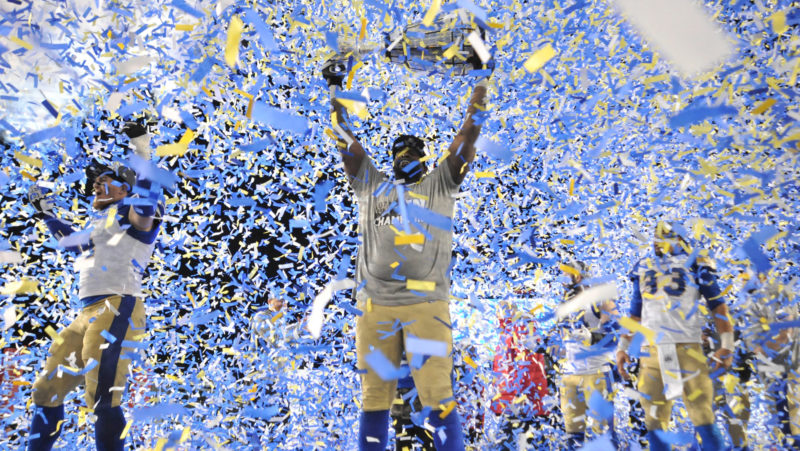 Members of the Winnipeg Blue Bombers celebrate on stage after winning the 107th Grey Cup presented by Shaw. (The Canadian Press)

Last weekend, TSN rebroadcast the 2019 Grey Cup and naturally, yours truly watched it again. It’s either the fourth or fifth time I’ve seen the game and the little chunk of history is also saved on my PVR.

The first couple of times I gobbled up the replay simply to see what details I might have missed while covering the game from the press box. It was hammered home, again, how dominant the Bombers were at the line of scrimmage and how dialled in Andrew Harris was from start to finish. Then you notice other things, like how some unsung starters like Kyrie Wilson, Mike Jones and Nic Demski stepped up, how Patrick Neufeld was a bulldozer up front, and how Justin Medlock was money again in tying a CFL record with six field goals.

Most times I’d stop watching the replay not long after Zach Collaros kneeled down and the TV cameras caught Harris and Demski – two proud Winnipeggers – embracing and skipping down the field as the clock went to zeroes.

But last weekend I watched the entire post-game show, too, including all the celebration, speeches and interviews.

And then I saw it again.

A man… somehow alone in the middle of all that celebration… sobbing uncontrollably.

Richie Hall is on the telephone from his off-season home in Regina. His voice is filled with the energy and enthusiasm that have been his trademark since he first ventured north as a player in 1983 with the Calgary Stampeders, beginning a 37-year association with the Canadian Football League.

The usual formalities aside, I open by asking him about that scene from Grey Cup and if he was OK to talk about it…

“I’m OK now. I need to talk about it. It’s good for me to talk about it,” he began. “Those were tears of sadness and also tears of joy. I don’t know where to start, other than to say there were so many mixed emotions going on at that moment.

“I had hugged a couple of people before that and then I was just trying to find somebody and there was nobody around at that very moment. I was by myself. I was looking around, but there was no one there and a feeling of emotion just overcame me.

“I just felt my brother’s presence because of what had happened previously.”

Michael Hall, Sr. was born 18 months after his brother. And, as some Bombers fans may recall, he passed away suddenly last October. The two men were very close and spoke and visited each other often, certainly after every game that Michael was able to see on television or in person.

Michael had been in Winnipeg for the Banjo Bowl last September and the two spoke on the phone following the Bombers’ loss to Hamilton on a Friday night a couple of weeks later. But by the following Sunday, Michael was in the hospital in Denver and three days after that, he was gone.

It was that, plus the memory of his mother, that brought Hall to tears in the Grey Cup celebration. But it was also like popping the cork on a giant magnum of emotions, bottled up over the weeks following his return to the Bombers and through the stress of a playoff run that saw Hall’s defence play absolutely spectacular football, especially on Grey Cup Sunday. 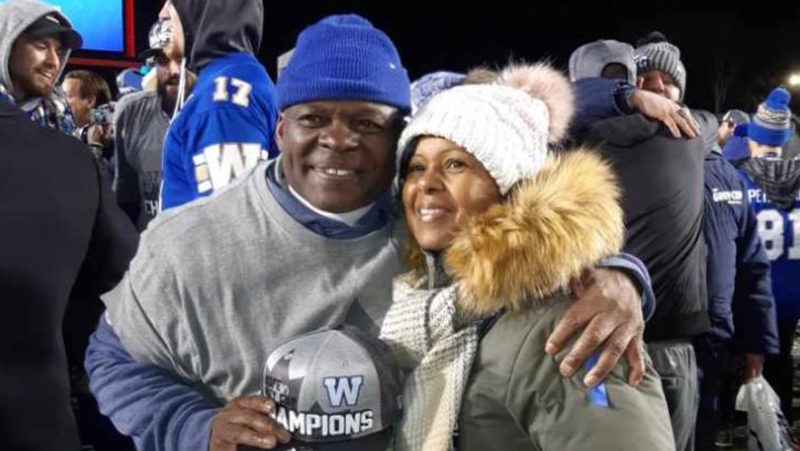 HALL AND HIS BROTHER, MICHAEL.

“When my brother was at the Banjo Bowl one of the things he said was ‘If you guys make it to the Grey Cup, I’m going to be there,’” said Hall. “And so in that moment on the sidelines… it just felt like the weight of the world was off my shoulders. But it also really felt like he and my mom were up in heaven looking down on us – me, the team, everybody. He was very excited about going to Calgary if we had made it. So, for us to go out there and play like that… I just felt his presence right there with me in that moment.

“It was one of those times where you just don’t guard yourself out in public. The emotions overtook me. I was just happy for him, happy for the guys and for the fans and everything.”

That poignant moment resonated with others, too, as Hall still gets asked about it occasionally. His sister saw the scene unfold while watching the game from her home in the United States and asked her brother about it as well.

Interestingly, while reliving that moment with others has kept it fresh, so much of the rest of the celebration is admittedly blurring now for Hall.

He remembers leaving the coaches booth up in the press box at McMahon Stadium before the game had ended and the pure joy as he and some of the other Bombers assistants took the elevator down to the main level.

He remembers running into the locker room to dump some of his coaching material and then grabbing his camera. And he can still recall walking down the Bombers sideline, hugging head coach Mike O’Shea and some of the players.

“All of a sudden there’s that switch,” Hall explained. “It turned to a flood of tears and the only thing on my mind was my brother and my mom. Up until then it was the emotion of the team, the celebration. Then, it became personal and those two important people in my life.

“It was, ‘I just so wish they could be here, but I can feel their presence.’”

Richie Hall has been moved by those who reached out to him over the winter, but by no means is he seeking sympathy. Especially now in the middle of this global pandemic and especially with so much death all around us.

What he will talk about openly is his faith and the healing power of sport. Now maybe that sounds cornball or cliché, but Hall – following a vacation to Hawai’i just after Christmas with his wife and some friends – has found it therapeutic to be back at work. When we spoke earlier this week, he and the Bombers coaching staff had just finished a conference call related to the upcoming CFL Draft.

“My brother was supposed to be married on December 1st,” said Hall. “So, there was his passing, then the playoffs came. That trip to Hawai’i was the first time I had a chance to sit back and reflect on what had happened over the past couple of months. It was just a stretch where everything was an extreme, from his funeral to the playoffs, to the Grey Cup.

“Death is something we all deal with. I mentioned it at the time of his death – what I experienced is no different than what anyone else might experience. Everyone has to deal with it at one point in time or another.

“We find a way to move on. I can’t tell you why because there’s no blueprint on it. I’m just thankful in my belief in God to provide strength and for the people around me because you don’t understand how much we do need each other until there’s a crisis. I found out then how much people do care, both near and far. That was my experience. It came from the Bombers family, from fans who offered their condolences and support and prayers. That means so much.” 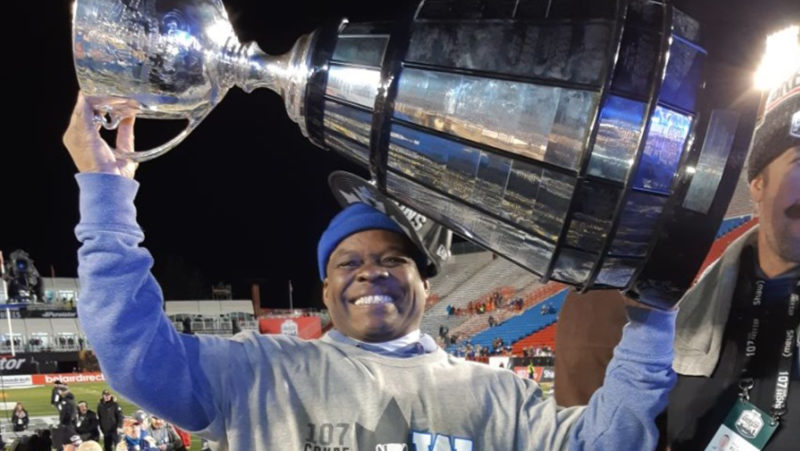 As our conversation continued, I made a confession to Hall, telling him that seeing his reaction again on the Grey Cup telecast brought tears. We then talked about machismo and that antiquated notion that real men don’t cry.

We also spoke about how the death of a close one changes all that, and how even the slightest thing can trigger a memory and the emotions then flow.

“There are things with my brother that I still struggle with because it brings back a sad memory. It can be while watching something on TV and it’s like I’m not ready for it yet. But those emotions can rise at the drop of a dime. I can be sitting there laughing and then all of a sudden I can feel my eyes tearing up because of the sadness. It’s part of the process.

“As guys, we’re taught to be strong, but as much as you try to be strong the emotions can overtake you. We want to be in control, but it’s the emotions that are in control. That feeling I had walking down the sidelines after we won the Grey Cup… I had no control over that. As much as I just wanted to be there and show my presence, you don’t want to be caught crying on TV. You want to cry because of joy, but those tears coming down were more than just celebration tears for me. I couldn’t hold it back.

“But you know what?” Hall added after an extended pause. “I’m OK with that. It’s part of your healing process and how you grieve. Sometimes that’s uncontrollable. And, sometimes, it’s just OK to cry.”