Following high school, Marc-Antoine Dequoy didn’t know what his football future held. He took a year to contemplate whether he wanted to hang up his cleats for good.

“That year off was one of the best decisions I’ve ever made. It brought back that flame,” Dequoy said. “It just made me realize that I grew up with the sport and that pretty much everything I knew was in football.”

He hasn’t looked back since. The 25-year-old has been a menace in the secondary of the University of Montreal over the past four years, flying around the field, wreaking havoc for opposing offences in the process.

From nearly quitting to one of the biggest game-changers in U SPORTS, Dequoy has the chance to be one of the first players to hear his name called in the 2020 CFL Draft. 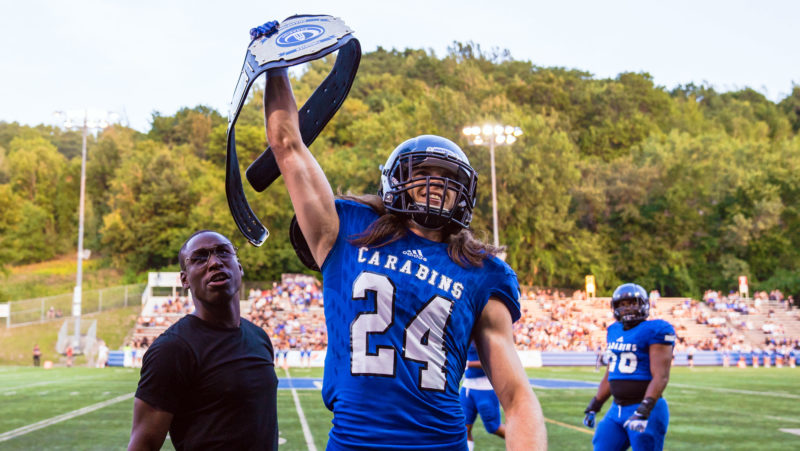 Dequoy’s father was a big football fan, so he signed his son up to play at a young age. He quickly developed a passion for the game and has stuck with it for the past two decades.

Before heading to university, Dequoy attended Montmorency College, a vocational school in Laval, Que. While continuing his education pre-university, he also played for the school’s football team following his year away from the sport.

He had experience playing halfback, safety and cornerback growing up, so his versatility would come in handy for any program that was able to land him.

However, Dequoy said that because of injuries and eligibility, he had played five games in three years, so only a few programs had offers out for him to join their program.

Then Montreal came calling and that was the choice that made the most sense to him. He would play his college ball under one of the best head coaches in the country in Danny Maciocia, who was able to mentor Dequoy from the very beginning.

“He made me understand the more professional side of football. He made you understand how to be good at your job,” Dequoy said. “(Maciocia) also taught me a great deal about not just the football side but the human side and the mentality that you’ve got to have. He’s one of the best coaches I’ve had.”

Dequoy started his collegiate career by filling in on special teams for Montreal, posting 9.5 tackles while appearing in five games.

He credits his opening year with the Carabins as the one that helped him develop the most as a player.

“I was dressing for special teams, but I wasn’t a starter on defence and I understood that it’s not just about instincts and being an athlete and making plays. You’ve got to understand the scheme and what to do on the field to fit in with the team,” Dequoy said. “Without that here, I think I would’ve just gone back to my old pattern — my only pattern, really, because I was never really taught football. I was mostly just making plays and using my instinct.”

His role continued to grow with each passing year. Year 2 served as his breakout campaign. He led the Carabins’ defence with 29.5 tackles and three interceptions while also adding one tackle for loss and four pass breakups in seven games.

That earned him RSEQ Defensive All-Star and U SPORTS second-team All-Defence honours for the first time in his career.

He continued to rack up the accolades during his final two years with the Carabins, becoming a three-time conference Defensive All-Star (2017, 2018, 2019), RSEQ Defensive Player of the Year (2018) and U SPORTS first-team All-Canadian (2019) honours.

During Dequoy’s prior three years with the program, they couldn’t get past the roadblock that was the Laval. The Carabins had lost three straight Dunsmore Cups to the Rouge et Or and were trying to get over the hump in 2019.

They did just that, defeating their rivals 25-10 to capture the championship. That helped Montreal advance to the Uteck Bowl, where they cruised to a 38-0 victory against Acadia.

That set up a showdown in the Vanier Cup between Montreal and Calgary, two of the biggest powerhouses in the country.

For Dequoy, it was the chance to end his U SPORTS career with a national championship in his home province. Unfortunately, he was forced from the game early after breaking his forearm. Calgary went on to win the Vanier Cup 27-13.

“It was bittersweet. Because you participate in the Vanier Cup but you lose it. You want to finish strong, every senior wants to finish their career with a Vanier Cup win,” Dequoy said. “But when you’re one of the two teams that can compete and have a chance at it, looking back at my college career, I’m blessed and grateful to have been a part of it.”

Despite the disappointing finish to his final year, Dequoy still had the impending drafts to look forward to. He was also one of the Canadians selected to play in the 2020 East-West Shrine Game in St. Petersburg, Florida in January.

He was on the same roster as University of Alberta offensive lineman Carter O’Donnell as well as some of the top talents from the United States.

“Being a Canadian, you always hear about American talents and American players,” Dequoy said. “Being able to compare yourself to them on a football field and to see the athletic side they had, it was a great experience.

“After that week, I said to myself and my agent and some of my family, ‘I can play in this league and I can play with these guys. I’ve been playing with these guys for a week and I know that I belong.’”

That was just the beginning for Dequoy. In March, Montreal hosted a pro day for him to showcase his abilities in front of teams — it was just the second time in the school’s history that they put on such an event.

His arm was recovering well, but he wasn’t going to participate in the bench press during the showcase. Just days out, he woke up with a cold. Because of the global pandemic, he wasn’t able to see a doctor, but after scheduling a meeting on the phone, he had the symptoms of either influenza or bronchitis.

Dequoy still showed out at his pro day with the Hamilton Tiger-Cats and Montreal Alouettes — as well as the NFL’s Philadelphia Eagles and Chicago Bears — reportedly in attendance.

That showcase started to rev up the hype machine down south, as Dequoy has since been looked at as someone who could be given an opportunity by an NFL squad.

The Bears were the more intriguing of the two NFL squads at his pro day, as they were the team that signed Mathieu Betts last year as an undrafted free agent and kept him around until the final day of their training camp.

“It was really nice to be able to have interest from NFL teams and it gives you a lot of confidence,” Dequoy said. “I didn’t focus on the teams that were there. You just have to go out and compete no matter how many teams there are and just do what you can do.

“I went in with the mentality that if I got interest from one team or 20 teams, I’m just going to show them who I am and what kind of football player I am.”

Heading into the draft on Apr. 30, Dequoy finished as the No. 9 prospect on the CFL’s Scouting Bureau rankings. CFL.ca’s Marshall Ferguson saw him going ahead of that, having him go to the BC Lions with the third overall pick in his first mock draft.

“Dequoy is one of the most unique prospects in this year’s draft,” Ferguson said of the talented DB. “With his length and speed, he has the ability to instantly make an impact on special teams and with the right coaching, his ceiling could be much, much higher.”

Dequoy describes himself as a playmaker who makes things happen at crucial junctions in-game. Any CFL team would like to be able to add his defensive instinct and athleticism to its lineup.

After 20 years of working towards his ultimate goal, he has just another week before the goal of becoming a professional football player becomes a reality.

“It’s funny because when I was a kid, this was my dream. I was thinking about it then. During my teenage years, I got more realistic and thought the chance of making it sound kind of hard. I still wanted to make it but I was talking about school, I was thinking about my future,” Dequoy said. “Then in university during my second year, I’m like, ‘I can actually make it.’

“I remember in my first year, some guys were doing, East-West I’m like, ‘Oh, I want to do that,’ and came back from there and just now being so close, It’s surreal. You think it’s going to happen and you feel it in the moment, but then when you look back, you think, ‘Damn, I was in that situation.’

“I’m just so happy to be a part of that and I’m really excited for the next two weekends (the NFL and CFL drafts). I’m getting ready to work and become a football player at the next level.”