O’Leary: Brissett ready to make the leap to the CFL 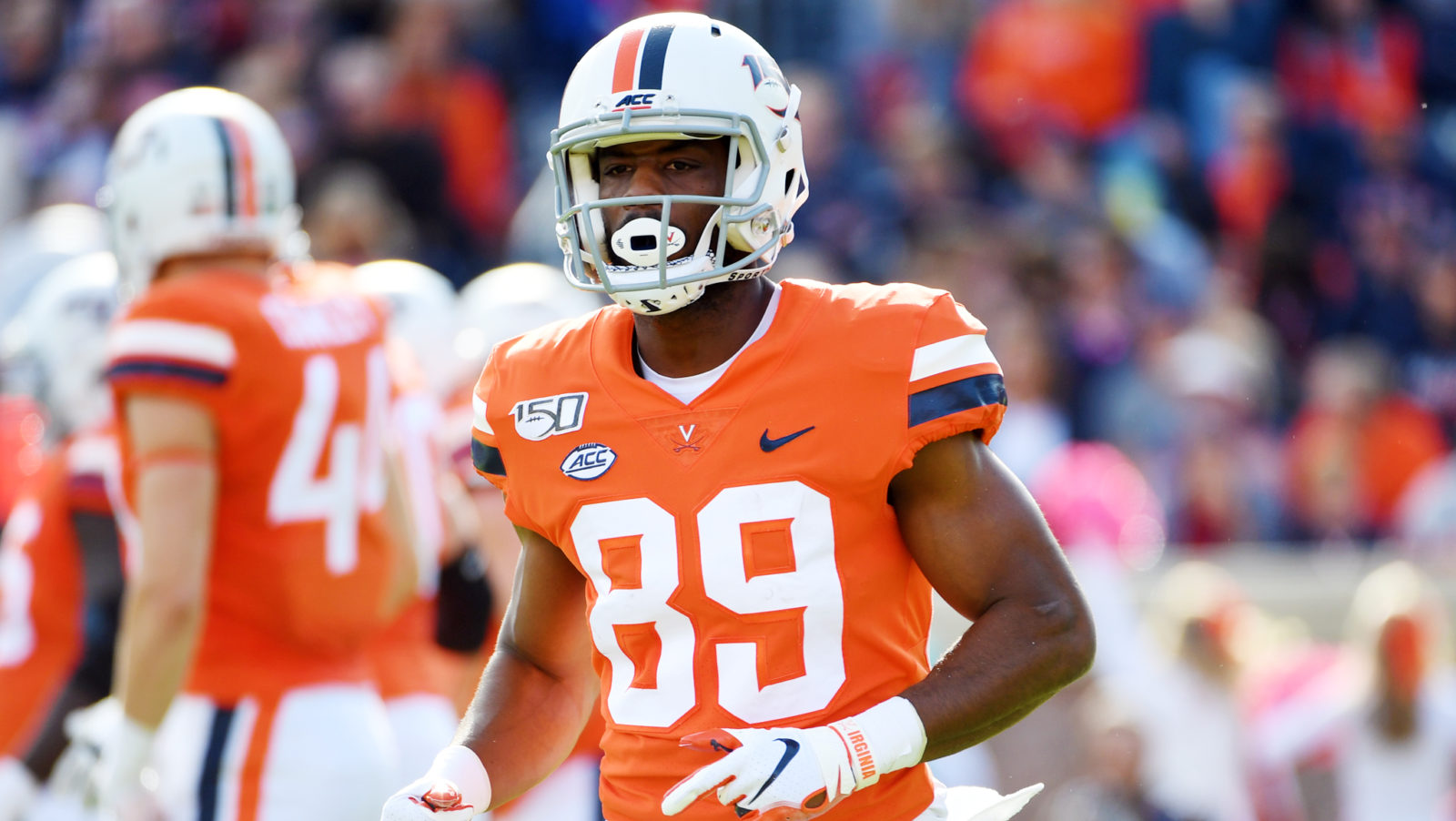 O’Leary: Brissett ready to make the leap to the CFL

The six-foot-one, 195-pound receiver from Mississauga grew up going to Raptors games with his brother, Oshea and their dad, Bernard. The brothers both played basketball. Oshea’s hoop dream turned reality  after a two-year stay at Syracuse resulted in a two-way contract with the Raptors this past year. Dejon took his talents — the high-flying, long range variety — to Lake Forest Academy in Illinois, while doubling up as a football player before basketball season.

While he dreamed of putting on a Raptors jersey, life started to tell him something as he got into his senior year of high school. He was getting football and basketball scholarship offers, but the best ones were all football. He thought about the bigger picture, about the best opportunities for him and decided it was time to zero in on football. He committed to the Richmond Spiders.

There was still that whole head-versus-heart battle, though.

“They say hoop dreams never die and I think I’m living proof of that, for sure,” Brissett said this week from Pickering, Ont.

“It was hard to let go but I had to. I even thought about joining the basketball team at Richmond my freshman year.”

Through a freshman year where he didn’t see much playing time, he fought off the urge to get on the court. Instead, he zeroed in on being the best receiver he could be. It didn’t take long for it to pay off for him.

By his junior season in 2017, Brissett was the Spiders’ No. 1 receiver, with 63 catches for 896 yards and seven touchdowns. His senior season was off to a huge start, with a 178-yard game against Fordham and the first kick return touchdown of his career against St. Francis. Sitting at 299 receiving yards in three games, Brissett broke a bone in his foot and his season was over.

He got his senior season of eligibility back and having graduated from Richmond, he transferred to Virginia. A big, high-profile Power Five program, Virginia was an open door to a big opportunity for Brissett.

That injury proved to be problematic. He’d recovered, but had to have a screw taken out of his foot, which led to him missing a couple of games. He played in 12 of the team’s 14 games and got two starts, finishing the season with two receptions for 18 yards.

“It was definitely a great learning and growing experience for me at UVA, mentally and as a football player,” he said.

“Obviously football did not go my way at all, but I think the experience of being part of an ACC-championship team and going to the Orange Bowl, playing in front of all of those people at Scott Stadium, that was a great experience from that perspective.

“I took practice seriously and I got better as a football player through practice, so I think it was all positive.” 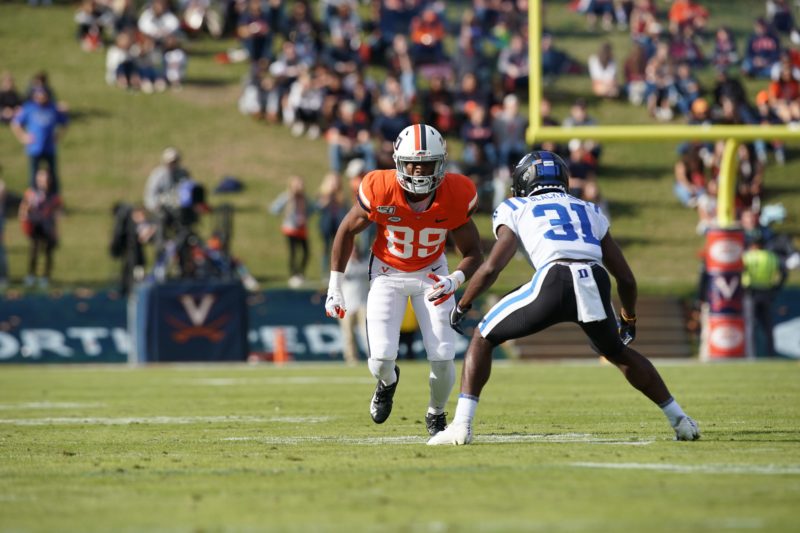 His year at Virginia didn’t go as he’d hoped, but Dejon Brissett took a lot of positives from it and says it’s helped him get ready to be a pro (Photo: University of Virginia)

With COVID-19 impacting all facets of our lives over the last month-plus, Brissett has had to find a way to continue to get his workouts in while staying safe. There are at-home workouts to do and there have been early mornings on empty fields in his neighbourhood, where he tries to get cardio and footwork drills in.

Like just about every other college player that was looking at a pro career, Brissett lost his pro day at Virginia. Before the virus ran out of control across the world, Brissett had put in work at a training facility in Chicago, building toward that pro day.

“It was my day that I was really going to set myself apart. Without production (from the year at Virginia) it was my way to show that I’m worth taking a look at.

“It getting cancelled was tough but at the same time I’m not the only guy that got my pro day cancelled. It’s something everyone has to deal with and you just hope for the best.”

The CFL’s national combine also being cancelled put all of the draft prospects into a unique situation. Brissett said that he’s spoken either through phone calls or video conferences with all nine of the CFL’s teams. The interview portion of the combine is the only thing that’s been able to carry on.

“There’s a lot more comfort being at home,” Brissett said of the interview process.

“I’ll have a nice button up on, but I’ll have shorts on at the same time, so it’s nice to be in the comfort of my own home. It’s different for sure, but I’ve done Zoom calls before so it’s not totally foreign to me.”

After a challenging year at Virginia, Brissett’s stock in the CFL Draft hasn’t taken a hit. He was the fifth-ranked prospect in the final edition of the CFL’s Scouting Bureau rankings, released on Monday. He jumped up two spots from the December rankings.

He admits that he thought more as a kid about playing for the Raptors than he did the Argos, but he’s locked in on improving whichever team selects him on Thursday night. In the most politically correct moment of our conversation he said that he has no preference on who chooses him. That doesn’t mean that there weren’t standout moments in those interviews.

“I wouldn’t say one team impressed me more than another but there were definitely some challenging questions,” he said.

“I like the different styles. Calgary had their entire staff and the GM was (on the call). That was really cool.

He didn’t say which team it was, but there was a uniquely difficult question posed to him over the last few weeks.

“The one that tripped me up the most was that I was asked to describe the worst player on my team,” Brisett said, laughing.

“I was like, ‘What? How am I supposed to…’ It was kind of tough but I think I answered it pretty well. I ended up being motivational about it. I said that the worst guy would be a freshman walk on that doesn’t have that much experience, hasn’t really gotten a chance to show who he is. I think I played that card pretty well.”

It makes sense that in a time where everything is being done digitally that Brissett’s first show of fancy footwork at the CFL level came on a Zoom call.