Through his 15-year run with the Montreal Alouettes, Anthony Calvillo was often the calming, stoic face of his team. No matter the opponent on the field, no matter the accolades that hung over him, the hall of fame quarterback never flinched. There was never a buy-in on hype, or the superfluous in any form.

Calvillo was about winning. He knew that if he got on the field and did his job well, his team could achieve its goal.

So it might be a surprise to hear that Calvillo will be in front of his TV on Friday night, eagerly consuming a night of CFL programming billed as Anthony Calvillo night.

Things change in retirement. The man that spent 20 years not letting the crowds of CFL stadiums affect him has a new audience and he wants to win them over.

“The main reason is I want to watch it with my girls,” Calvillo said of his two daughters, Olivia and Athena.

“They’re 12 and 14 and they do remember a bit of me playing. Right now we’re working out together. We’re going for runs and playing basketball in our driveway and half the time I’m pulling something. My hamstring pulls or my calf pulls and my girls are just laughing at me. 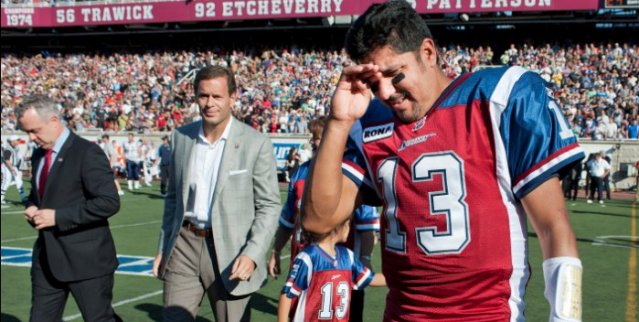 Calvillo retired in January, 2014, capping an incredible career that started with the Las Vegas Posse in 1994. He was with the Hamilton Tiger-Cats from 1995 to 1997 before landing with the Alouettes in 1998, where he’d make history playing quarterback. Calvillo won three Grey Cups with the Als and played in the championship game eight times between 2000 and 2010.

TSN gets the ball rolling on Friday night at 7:30 p.m. ET and will show Calvillo’s greatest statistical achievement. On Oct. 10, 2011, Calvillo became professional football’s all-time leading passer in a win in Montreal against the Toronto Argonauts.

When he looks back on that game now, Calvillo thinks of how questions about the record surrounded the team from training camp up until that game. In hindsight, it was more of a distraction than he realized.

“Everywhere I went people kept asking the question: ‘What do you think? Will you be able to do it?’ I really had to get myself mentally ready to deal with that all year long. For the most part I thought I did a pretty decent job,” he said.

“When I really look back at it, it was a distraction for the football team. The players always get asked certain questions but there were so many questions leading up to this game that it might have been a small distraction.”

Calvillo knew the record was within reach if he could stay healthy and play well every week. When the home game against the Argos arrived, he was surprised to see a countdown on the scoreboard at Molson Stadium. He’d know with every completion he made just how close he was to breaking the record.

He’d seen big records fall in other sports and knew that often the game would stop and the moment would be commemorated. He didn’t want that, but it was inevitable. What he didn’t know was that the Als had put together a tribute video with other CFL and NFL quarterbacks, including Warren Moon, Dan Marino and Damon Allen, among others.

“It’s a memory I’ll always have and cherish,” Calvillo said.

“I was very fortunate to share it with my teammates, my coaches and the fans but especially my family. My girls and my wife and my mom were there.

At 10:30 p.m. ET, TSN will jump back to the 2010 season-opener, which was a rematch of the 2009 Grey Cup. Calvillo and the Alouettes traveled to Mosaic Stadium to face the Saskatchewan Roughriders for the first time since the infamous 13th man finish that previous November. The game was full of emotion, drama and a too-many-men call against the Roughriders (again!) that saw the home team hold on for a 54-51 overtime win.

“It was a hot day, of course it was Canada Day and I remember it was high-scoring. We jumped on them pretty good,” Calvillo said of the game. He threw for 368 yards and four touchdowns, with one interception that day.

“Then Darian Durant brought them back. The game just went back and forth. I’m not sure if it was at the end of the game or it was in overtime, where they had another 13th man episode. I think it was in overtime and it gave us a chance. It’s one of those games that you’re looking forward to and you want to start the season off on a winning note. Unfortunately we didn’t win that game but it was very exciting for the fans to watch.”

Durant finished with 481 passing yards and five touchdowns. While it might have been an emotional game for Riders fans, who were still feeling the pain of the 13th man Grey Cup loss, Calvillo didn’t remember that feeling on the field.

“We’re working out together. We’re going for runs and playing basketball in our driveway and half the time I’m pulling something. My hamstring pulls or my calf pulls and my girls are just laughing at me. I’m like, ‘You guys have no clue what daddy did back in the day.’”

“I don’t recall feeling any tension but any time you stepped into that stadium, into Mosaic, the fans were awesome. The fans are so intelligent,” he said.

“When their offence has the ball, it’s quiet, there’s no noise and all of a sudden the opponents get the ball and it turns into a different atmosphere and that’s always the case there. That’s something I’ll always remember about playing there.”

Like so many of us, Calvillo is trying to make the best of a difficult situation as he and his family deal with this pandemic. He’s loving the time at home in Montreal with his family and is continuing on with off-season work with the Montreal Carabins. Calvillo was hired in December as the assistant head coach of the university team. There have been lots of online meetings with his fellow coaches and online interactions will increase with players now as the academic semester winds down.

He looks back at all of his coaches and thinks of two very different ones from his time in the CFL, in Don Matthews and Marc Trestman. They’ve both helped shape him as he moves forward as a coach.

“You always remember your last coaches. For me, Don Matthews changed the course of my career when he said, ‘A.C., we’re going to build this team around you,’ when he arrived here in 2002,” Calvillo said.

“To have that type of confidence from a coach just gave me confidence. We went out and had a lot of success.

“But his philosophy was totally the opposite of Marc Trestman’s. There are so many ways you can do it. It’s a matter of what you feel comfortable doing. For me, I look at all the things I’ve learned through so many coaches but I always remember what Marc did for me and his teaching style, his communication and his detail to the game. A lot of stuff that I try to do now is reflective on what I’ve learned from Marc and from Don.”