Harelimana excited to see where his football future lies

Harelimana excited to see where his football future lies

Brian Harelimana and his family are of Rwandan descent, so whe he told his mother that he had an interest in playing football, she thought that she was signing him up for soccer.

“We got to registration and she saw the pads and helmets and went, ‘This is not football!’ and I told her that this was football,” Harelimana said. “So I registered and did the first drill and fell in love with the game at that moment.”

The Laval, Quebec native has been a four-year impact player for the University of Montreal and has the opportunity to be the first linebacker off the board in the 2020 CFL Draft. 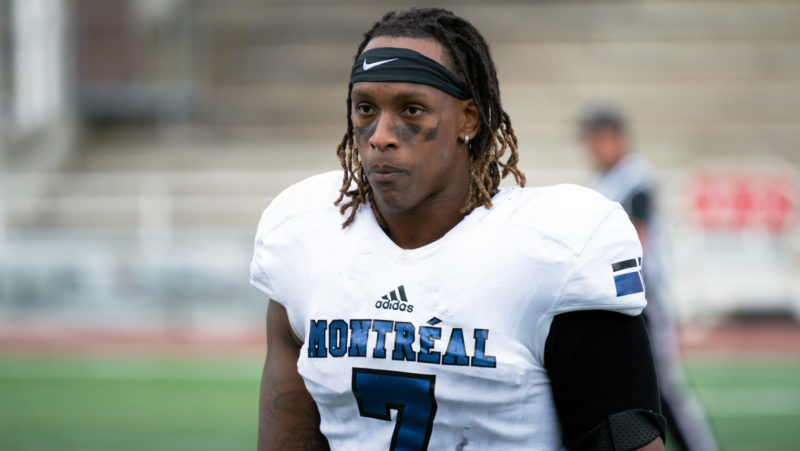 Harelimana began his football journey playing running back, but as he levelled up and everyone got bigger and stronger, he made the switch to linebacker. He’s been at the position since 2006.

Before going to college, Harelimana wanted to diversify himself, so he decided to attend an English-speaking CGEP school, Vanier College, where he also played for the football team. He was recruited by schools all over the country, but he made the choice to stay home and play for the University of Montreal.

“They offered me everything I needed,” Harelimana said. “I felt that Montreal was the school that was going to get me ready for the pros. I had a coach that was a head coach and GM in the pros and I felt like he was the best guy to guide me on this journey.”

Harelimana found himself in a position to be a contributor right off the bat for the Carabins. In his first season, he played in all eight games for the team, putting up 22 tackles, two tackles for losses and a sack.

He put up similar stats during his second year with the program, and in 2018, he finished second on the team in tackles with 30.5 to go along with one tackle for a loss, one sack and an interception while appearing in seven games.

Heading into his final season, Harelimana had a sitdown with head coach Danny Maciocia, who asked him to take on more of a leadership role on the team.

“We had a younger team this year and we wanted to reach the ultimate goal, which was the Vanier Cup. So we had to have a great group of leaders,” Harelimana said. “So (Maciocia) made it clear that my biggest concern would be the way I lead these guys through the whole journey. We had to battle some ups and downs during the season and I had to lead and stay positive. So that was the biggest vault in terms of a year for my development.”

While the Carabins were working towards making it to the national championship, they had to beat the rival Laval Rouge et Or in the Dunsmore Cup first. The Quebec-based powerhouse had Dunsmore Cup wins over Montreal in all three of Harelimana’s prior years with the program. To boot, there was also a sibling rivalry raising the stakes, as younger brother Kean, a linebacker, had been to the Vanier Cup with Laval in his first two years and took home the title in 2018.

However, it was the older brother who got the bragging rights in 2019, as the Carabins came out on top, en route to winning the Uteck Bowl and making it to the Vanier Cup game against Calgary, which was being hosted in Quebec City, QC.

“It felt like I got a monkey off my back,” Harelimana said. “Those losses to Laval were heartbreaking defeats. I knew I didn’t have a lot of shots left and my brother had been to two Vaniers already, so I had a chip on my shoulder. Also knowing that our team was counted out — we went into the Dunsmore Cup knowing that probably everyone except for our own team was counting us out. So it was really nice to get that weight off my shoulders.”

The Carabins went into the title game without starting pivot Frédéric Paquette-Perreault and to make matters worse, starting defensive back Marc-Antoine Dequoy went down early with an arm injury. Montreal ultimately dropped the game to Calgary by a 27-13 score.

As the old saying goes, you learn more from failure than you do from success, and Harelimana is no exception to that.

“I believe that I grew the most from those Dunsmore Cup losses to Laval in 2016, ’17 and ’18,” Harelimana said. “The thing I came to understand in 2019 was that the most important thing was having a tight locker room. The guys were fighting for each other and I put an emphasis on having team-bonding activities to make sure the guys were together and that win or lose, we were all fighting for each other. I’d say I’m most proud of that.”

Along with his ever-growing leadership, playing ability and football IQ, Harelimana believes that he can come in and be a swiss-army knife for a defence at the next level. Whether it’s pass rushing off the edge or dropping back to play in coverage, he’s comfortable at all three levels.

In his 29 career games as a member of the Carabins, he was able to do it all, posting 112.5 tackles, seven tackles for loss, six sacks and a pair of interceptions. He was also named to the RSEQ Defensive All-Star Team in his final three years while earning U SPORTS Second-Team All-Canadian honours in 2019.

Harelimana has had the chance to speak virtually to several teams during this process and get a feel for which city he could be calling home in a week’s time. CFL.ca’s Marshall Ferguson believes that he might not have to move at all.

In his first mock draft, Ferguson had the talented linebacker landing with the Montreal Alouettes — and new general manager Danny Maciocia — with the 16th overall pick in the draft.

“Harelimana is a stone solid tackler with good recognition skills and should slot in as a developmental third-string weak side linebacker quickly for a team in search of depth with special teams body type upside.”

It’s safe to say that after all these years, a team will be more than happy that Harelimana decided to play gridiron football as a child. He has just a few short days before the draft rolls around on Apr. 30. It’s been decades in the making and the 24-year-old is prepared for what lies ahead in his football journey.

“It’s starting to kick in a bit this week and I feel like when the NFL Draft is done, it’ll start to kick in even more,” Harelimana said. “I’m really excited to know (where I’m going) because the biggest thing with the draft is that there’s so much uncertainty. You don’t know where you’re going to be or even if you’re going to get drafted so there’s a lot of question marks.

“I feel like after that day, a lot of the question marks are going to be answered and I’m just going to be prepared to go to camp.”