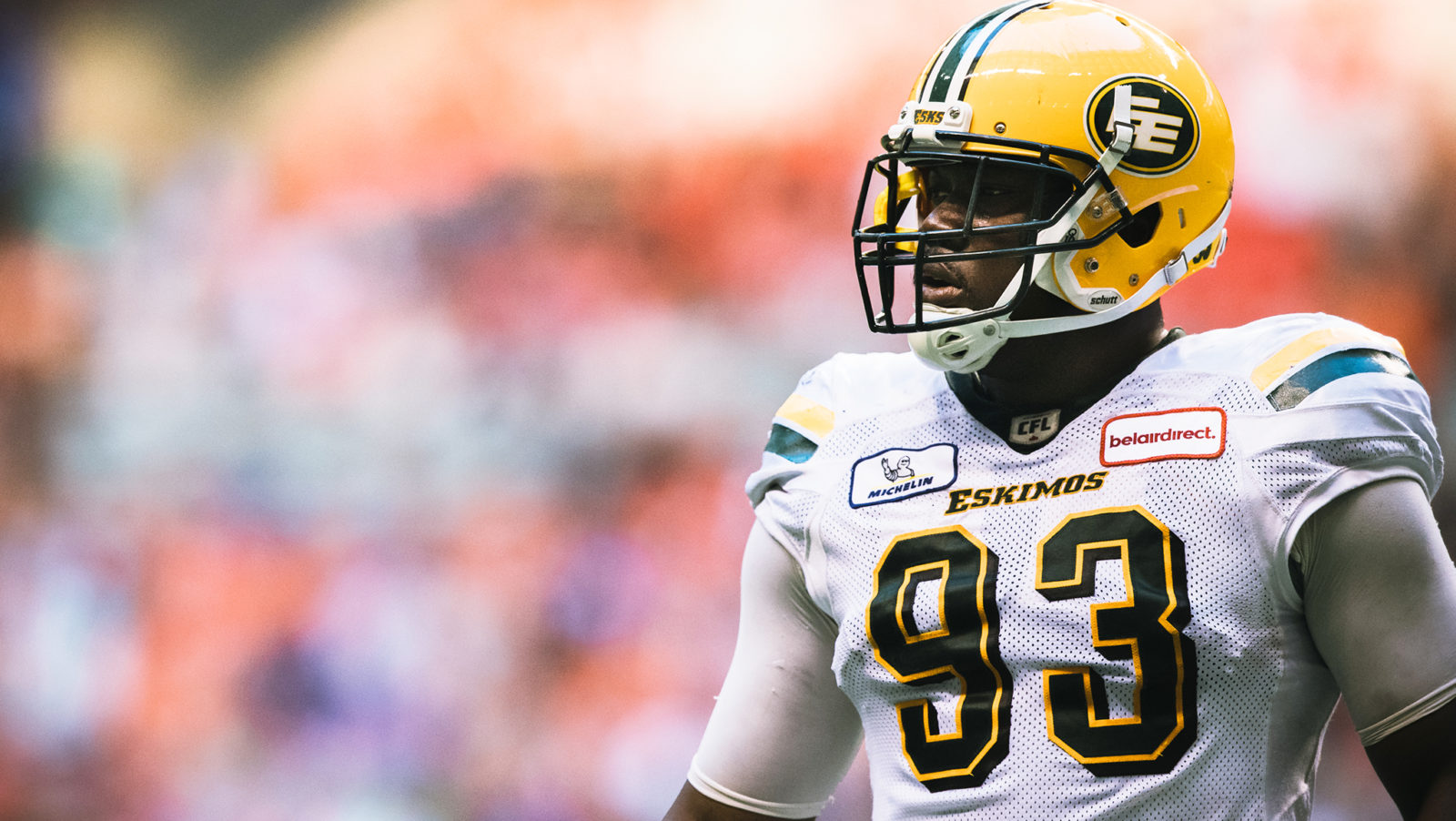 EDMONTON — Kwaku Boateng’s fall from grace at the 2017 CFL Draft was shocking.

He had been rated the No. 2 prospect behind Mississippi State University offensive lineman Justin Senior in the fall rankings of the CFL Scouting Bureau’s  Top 20 list, dropped to No. 6 in the December rankings and finished up No. 12.

What came next was almost unbelievable. After a CFL Combine performance that even Boateng admits wasn’t good enough, he didn’t get selected in the draft until the fifth round, 41st overall. 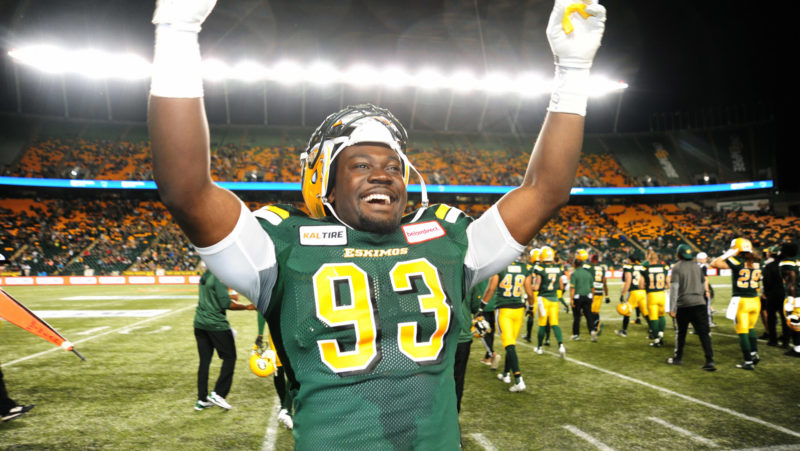 Kwaku Boateng was selected by the Edmonton Eskimos with the 41st overall pick in the 2017 CFL Draft. (Walter Tychnowicz/CFL.ca)

“I started out very confidently because I had the perception that even though the Combine didn’t go my way, I had a full body of stats and accolades from university that should show that what you saw from me at the Combine isn’t the whole story of me, especially from the testing standpoint,” said Boateng, who spent his first off-season in Edmonton this winter. “I felt confident that teams would recognize that and see me as an impactful player down the road.

“After maybe two or three rounds (of the draft), my confidence kind of dwindled and it became more so almost determination, like a chip on my shoulder,” he continued.

“When I got the call from the Eskimos in the fifth round, I was obviously happy and excited, but more so I was calm. I wasn’t cheering too much.

“IT WAS MORE SO ‘OK, LET ME KNOW WHEN I CAN REPORT TO (TRAINING) CAMP SO I CAN SHOW YOU GUYS AND THE CFL THAT YOU GUYS MESSED UP.’ IT BECAME ALMOST LIKE A VENDETTA WHERE I’VE GOT TO MAKE SURE THAT I PROVE TO MYSELF AND EVERYONE ELSE WHO DOUBTED ME THAT I WAS WORTH A LOT MORE IN THE 2017 CFL DRAFT.”

Boateng, who turns 25 on Apr. 26, was asked if he’d be where he is today – a rising star with 17 quarterback sacks on the Eskimos’ defensive line over the past two seasons, Edmonton’s Most Outstanding Canadian Player each of the last two years and the team’s Rookie of the Year in 2017 – without that experience.

“The political answer would be, ‘I don’t think so’ and ‘I think the chip on my shoulder really helped,’ but you really don’t know,” he said. “All I know for sure is I have a lot of love for Edmonton and the Eskimos and the coaching staff that acquired me my first year because they showed me nothing but love, respect and opportunity, so I’m very, very, very grateful.”

The 6-foot-2, 257-pound defensive end, who was born in Ghana and grew up in Milton, Ont., doesn’t think his demeanour or determination would have been any different if he had been selected earlier in the draft.

“If I go back to my mentality going into the draft, it wasn’t about when I got taken off (the draft board),” he explained. “It was where I was going.

“The big emphasis on where I was going is because I’ve seen countless times where players are drafted to certain teams and they’re not utilized the way they should be or the coaching staff or organization doesn’t see them in the same light that they were shown throughout college. For some reason, they feel like things had to change once they turn pro.

“It really depended on which organization and which defensive team I landed on, but thankfully, I went to Coach (Mike) Benevides’ defensive scheme and I fit very well,” Boateng added. “The organization gave me a chance to achieve that success.”

Benevides was the Eskimos defensive coordinator at the time.

“Obviously, it would be nice to get picked up earlier – mainly from a financial standpoint, but at the end of the day, it’s a long game,” Boateng said. “It’s not a race; it’s a marathon. I was put in a position that benefitted me the best.”

Just as important for Boateng’s growth curve in his rookie season with the Esks was the great cast of players around him on the defensive line “who taught me the ropes and helped me advance.”

“Really, they’re a catalyst for my success, just helping me grow up a lot faster on and off the field,” he admitted.

In particular, Boateng learned how to get off the line at the snap of the ball faster – “how to be twitchy” – from Phillip Hunt and to believe in yourself from Odell Willis – “just having so much confidence that you believe that you’re the best, even when you’re not there yet. As long as you have that mentality, it’s going to drive you and propel you further.”

He also spent hours watching game film of all of his talented veteran linemates.

Boateng didn’t put much stock in the Scouting Bureau rankings during his final year of university football, although he considered it “a great honour” when he was ranked second behind Senior.

“Obviously, I was very happy to be No. 2, but I knew that being that high, I had so much more space to fall. If I let that get in my head, it could really ruin my last year in university. I didn’t want that. I don’t play football for money or fame. I play football because I love it. I’m just blessed that, obviously, financially it helps you, too.

“I knew I had to take care of myself on and off the field and the rest would figure itself out as time goes by,” he continued. “You’ve just got to believe that, in the long run, you’re going to come out at the end as a better player.”

Boateng collected a career-high 6.5 quarterback sacks during his final season with the Wilfrid Laurier Golden Hawks for a career total and school-record 20.5 sacks over four years. He also made 22 defensive tackles, four forced fumbles and six knockdowns in his last year.

“I was put in a great system,” Boateng said. “Like I was talking about with the Eskimos, Laurier is all love.” 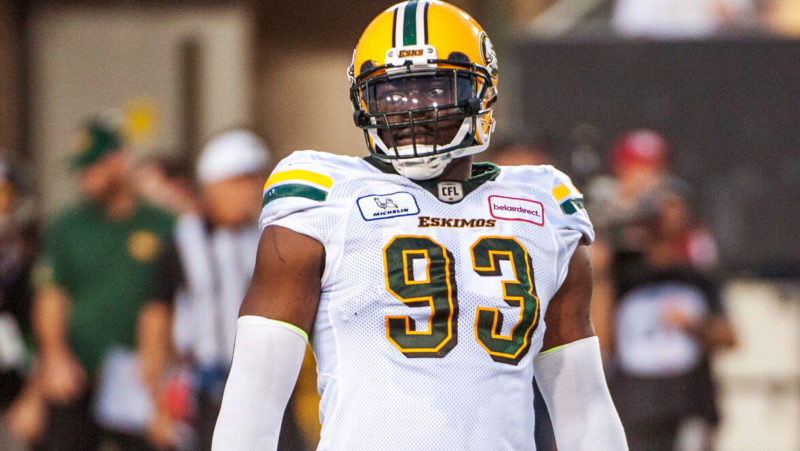 Kwaku Boateng was a top 20 prospect in the 2017 Scouting Bureau rankings following his collegiate career with Wilfrid Laurier. (Adam Gagnon/CFL.ca)

He explained that the system employed by defensive coordinator Ron VanMoerkerke “worked so well for me and he gave me a chance to play my first year. Over the years, that’s also helped me get to where I’m at. He would let you loose, especially if he trusted you. He let you figure out the game for yourself, especially on the DLine, and let you get comfortable in his defence.”

Boateng took advantage of an option to rush the quarterback from a wide nine spot (going a little wider on the edge of the line) in university football.

“I think that helped me in college,” he said. “But when I went to the pros, that didn’t help me as much because the O-linemen are a lot better and the offensive tackle positions are usually American spots, so they have a lot of extra experience and, sometimes, NFL experience.

“All that gimmicky stuff didn’t work. It really had to come down to good hard work and good fundamentals.”

A two-time Academic All-Canadian, Boateng wasn’t able to work as hard as he wanted on his football training before the CFL Combine because he was also working a lot of hours as an accountant for PWC during his last co-op term at Wilfrid Laurier.

“It was a stressful time, so I couldn’t put as much effort as I wanted into the Combine,” he said. “For me personally, the results weren’t up to the par and I think that showed itself through the Scouting Bureau reports and even down to the Draft Day.”