Nye: A tough but (ultimately) rewarding revisit of Riders’ history 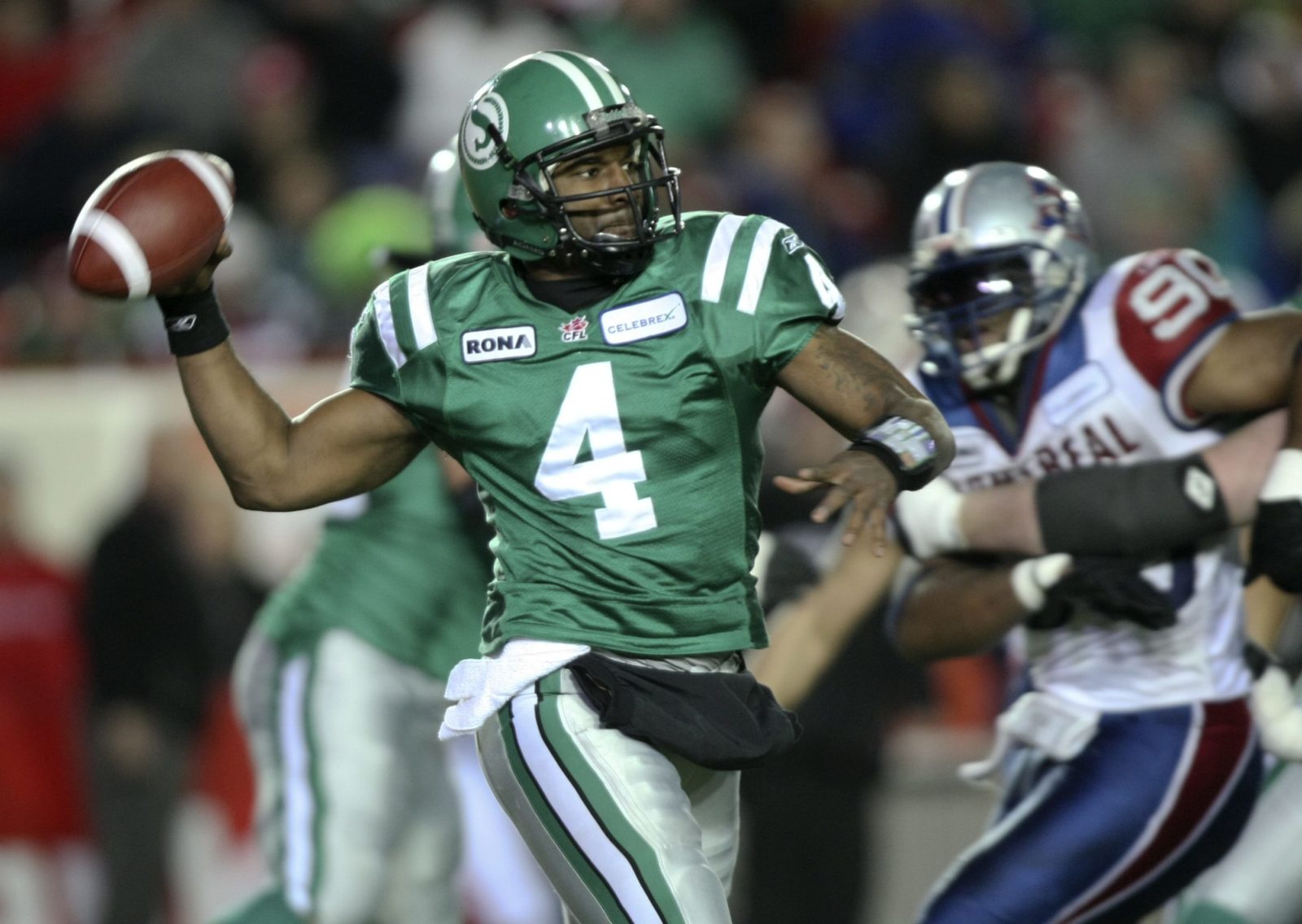 Nye: A tough but (ultimately) rewarding revisit of Riders’ history

The dynasty that could have been but wasn’t because of a 13th man and a total of four points.

I was in the losing locker room for both the 2009 and 2010 Grey Cups, which were drastically different though with the same result.

Tonight, the CFL on TSN will show two great Grey Cup games that ended in heartbreak for Rider Nation at the hands of Anthony Calvillo.

But over a decade later, Rider Nation can look back at these two games with a different perspective. Those years were the beginning of some great football for the Riders with some players becoming Rider fan favourites and many who could enter the team’s plaza of honour: Darian Durant, Chris Getzlaf, Weston Dressler, Keith Shologan, Rob Bagg and Chris Best.

These players were part of the core group that would bring home the biggest win in Riders history in 2013, as they pounded the Hamilton Tiger-Cats in an unforgettable night for Rider Nation.

Durant in particular had a hunger in his eyes during 2013 playoffs that burned hotter with the devastating memories of the Grey Cups lost that will be showcased in TSN’s classic games.

As unforgettable 2013 was, 2009 was equally memorable. Though that game is more of a nightmare for anyone that was on the team, loved the team or even cared about anyone who wore green.

Rider fans are likely wanting to avoid the 2009 game, but I wouldn’t. It was a thrilling game, minus the finish.

The players I mentioned earlier were just starting to break into their prime. Keith Shologan picking up an Anthony Calvillo fumble early was a statement that the young Riders weren’t going to just lie down to the perennial powerhouse Alouettes.

They continued to throw their weight around. Durant hit Andy Fantuz on the next play to go up 10-0 and I remember the press box starting to move to the edge of their seats as the Riders were heavy underdogs.

The Alouettes had the three C’s of Calvillo, Cahoon and Colbourne, after all. The Riders entered the game without their speedy game breaker of Weston Dressler, who was injured late in the season.

The Riders’ lead grew to 17-3 at halftime and Durant’s touchdown run with just over 10 minutes left gave the Riders a 27-11 lead. It was euphoria in Rider Nation and in an extremely green McMahon Stadium.

Well, you know what happened next. Calvillo stormed back, Damon Duval missed a game-winning field goal, official Glen Johnson called ‘too many men’ and the Alouettes got to party. 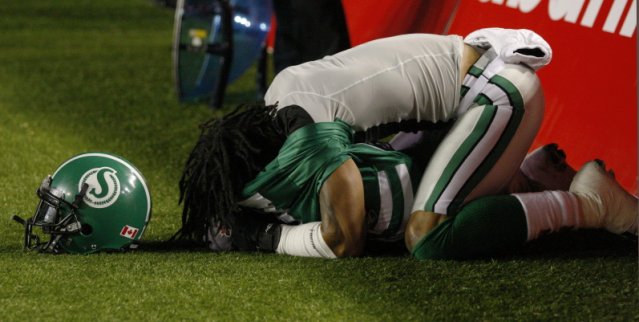 The Riders and their fans were devastated over the penalty that cost them a Grey Cup (Photo: The Canadian Press)

I believe that what happened next was vital in the growth of what was to be a championship team. I’ll never forget that heartbroken locker room. I’ve told people the only thing I’ve ever witnessed with as much devastation, tears and heartbreak was the day after my grandfather died when my family first were able to grieve together.

It was a funeral in the locker room. But there was no finger pointing, there was no anger (except for one player displeased with media being in the room) and one by one the leaders stepped forward. Rey Williams spoke passionately about the team and how no one player lost the game. Sadly, Rey was injured and couldn’t play in the 2013 Grey Cup, but he was an important leader for the team.

Ken Miller would then enter the room and hug each and every member of the team. Special teams coordinator Kavis Reed fell on the sword for poor communication on a new formation they put into the playbook in the the last month. Its sole purpose was set up to block a game-winning field goal. The personnel switch got lost in the high tension of the last play of a championship game.

Then the media waited, and waited, for Durant. It was his first full year as the team’s starter and the story goes he and Andy Fantuz were in a nearby room, too overcome to speak.

He came out, he blamed the offence for not scoring touchdowns in the first half and being unable to move the ball in the final 10 minutes. They were one first down away from winning the game, more than likely.

The fact that nobody would crack on who the 13th man was helped solidify the organization and players moving forward.

In 2010, it was a different story. The Riders had a chance to storm back late in the game in what continues to be the second-most watched Grey Cup ever, with 2009 still at No. 1.

The rematch ended with Durant throwing an interception, scrambling out of trouble as only he could but ending the play coming up short on trying to throw the ball away.

Another lesson learned for Durant, who threw a key interception late in 2009 game as well.

That night, the tears were limited in the Rider locker room. They knew they were beat and had more to give to get their revenge. 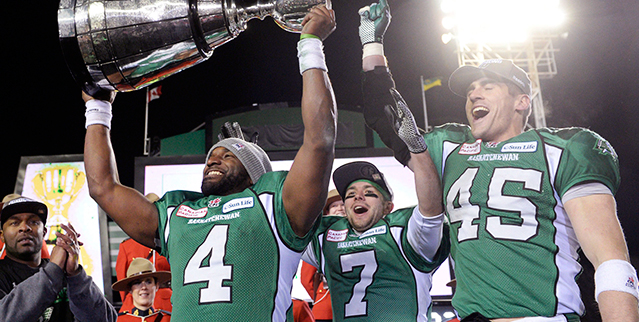 Darian Durant and the Riders got their championship moment in 2013 in front of their fans at Mosaic Stadium (Derek Mortensen/CFL.ca)

The fire burned, as the team got an upheaval in 2011 and then got a bit of rebuild in 2012 and going into 2013, with players arriving like Brendon LaBatte, Dominic Picard, the return of John Chick and Rey Williams, Geroy Simon, Ricky Foley, and NFL running back Korey Sheets.

They were added to the aforementioned core group who knew they had the ultimate retribution story in front of them with the 2013 Grey Cup at historic Taylor Field before it was torn down.

Durant, Getzlaf and Dressler were CFL West All-Stars, driven to win, fueled by the disappointments of the seasons earlier.

In the playoffs, Durant was a man possessed, taking over the West Semi-Final to comeback and beat B.C., the team rolled through Calgary with a 35-13 win and there was no stopping them once they arrived on game day for the Grey Cup game.

Durant didn’t throw an interception. His only misstep was a fumble that landed in Kory Sheets’ arms for a huge gain in the Grey Cup. He was keen on protecting the ball after those interceptions in back-to-back Grey Cups gave Montreal a chance to win.

His emotion when he won was undeniable. ‘You don’t know what I’ve been through’ was caught by TSN when he held QB coach Khari Jones after the win. And it’s true. Nobody, maybe except for Andy Fantuz truly knew what went on in that training room at McMahon Stadium after 2009.

So if you’re a Rider fan trying to find a reason to watch these classic — and heartbreaking — Grey Cups, remember that they were the hardships that made the 2013 win feel that much sweeter.