WINNIPEG — Following the 2020 CFL Draft, Winnipeg Blue Bombers general manager Kyle Walters was elated with the latest crop of prospects that will be donning Blue and Gold in the near future.

“You get to do this job and the best part about it is the excitement,” Walters said. “One of my favourite days of the year is after you draft a player and how excited they are and how pumped they are. Nobody is worried about anything other than that they were drafted by the Bombers.

“Everyone is working and the kids are the same way. They can’t wait to get started. …They’re ready to roll.” 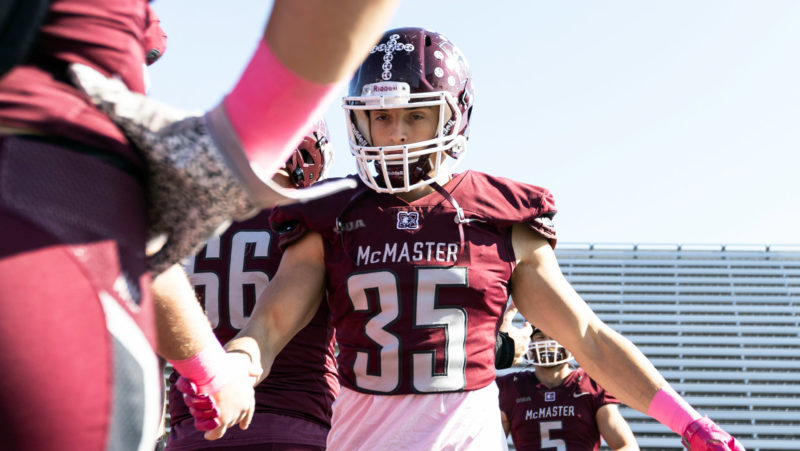 There were rumblings of the Bombers looking to possibly move back into the first round, however, Walters made it clear ahead of the draft that he didn’t have interest in giving away more assets if he could avoid it.

When the draft rolled around, the Bombers stayed put at No. 18. Despite that, there was still some incredibly talented players on the board, leaving the Winnipeg front office with options when they finally had the chance to select.

They landed on uber-athletic McMaster defensive back Noah Hallett,

The London, Ont., native has played his entire U SPORTS career with McMaster.

Hallett was named an OUA First-Team All-Star and U SPORTS Second-Team All-Canadian this past season.

For his career, Hallett had 68.5 tackles, four tackles for loss, three sacks, seven interceptions, one forced fumble, one fumble recovery and 15 pass breakups.

He played weak-side halfback for the majority of his career but did plug holes when needed due to injuries.

The pick hit close to home for the Bombers, as Noah joins older brother, Nick, in the defensive backfield. The elder Hallett brother impressed at the Ontario Regional Combine in 2019, leading to the Bombers selecting him with the 61st overall pick in last year’s draft.

Nick served as a special teams player for the most part in his first year but also provided depth in the Bombers’ secondary. While he was helping the team make a push for the Grey Cup last season, Noah was doing his thing in his final year with the Marauders.

2019 was the best season of his career, as he finished with 29.5 tackles, one tackle for loss, one sack, four interceptions and six pass breakups while playing in all eight regular-season games.

“We were talking about it a little earlier, just the positive comments (about the Bombers). Whether it’s Nick or my McMaster coaches, they all say that it’s such a great place to play,” Hallett said on Friday. “It’s such a professional organization and there are great people that play there and that have played there so it’s surreal to get this opportunity and I’m excited to get to work with them.”

Hallett added that he and Walters were able to chat briefly on the field at McMahon Stadium after the Bombers took home the Grey Cup.

His agent had mentioned that the Bombers had interest, and he was able to share the experience with his brother and family on Thursday night.

The Hallett brothers have shared the field just once in their lives. They clashed when McMaster and the University of Toronto went head to head, but they would never be on the field at the same time as defensive stars for their respective squads.

Now, there’s a chance that the brothers could be battling each other for a chance to start for Winnipeg.

“There could be a Hallett brother competition in camp,” Walters said jokingly, adding that they could see moving Noah to free safety in the future.

As for the rest of the class, Walters was able to add key pieces with his six remaining picks of the night.

The Bombers landed a pair of highly regarded players in receiver Brendan O’Leary-Orange along with defensive lineman Nicholas Dheilly in the fourth and fifth rounds, respectively. Standout kicker Marc Liegghio from Western was also added in the fifth.

“O’Leary-Orange’s upside is pretty darn high, and the same goes for Liegghio. He’s one of the best kickers we’ve seen come out of the draft and he’s good enough to be kicking in the CFL,” Walters said. “Dheilly is a long, athletic guy who’s a 100-mile-per-hour guy all the time. He runs around and smashes things and comes off the edge with twitchiness and quickness.

Walters added that Rodger had the best special teams film that he had seen of anyone in the class and is a ‘Blue Bomber kind of guy’ who’s a jack of all trades. 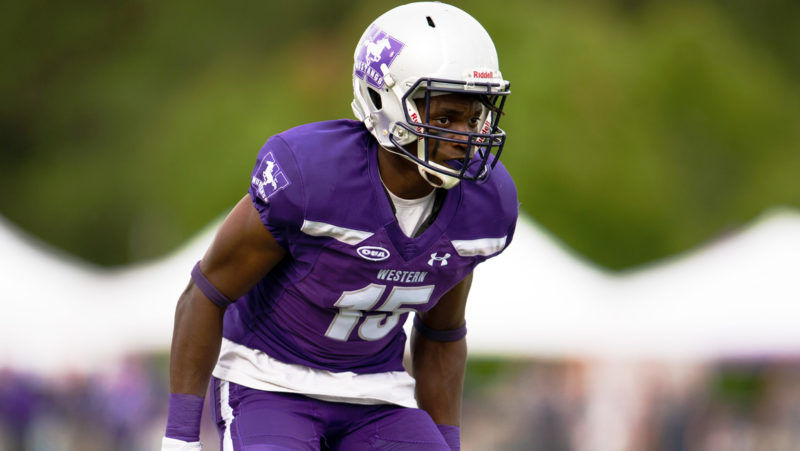 Western defensive back Bleska Kambamba was taken with the 73rd overall pick in the 2020 CFL Draft. (Western Athletics)

Kambamba played corner among other spots in the secondary for the Mustangs during his U SPORTS career. He did it all on the defensive end in 2019, finishing with 46 tackles, one tackle for loss, one sack, two interceptions, two forced fumbles, a fumble recovery and four pass breakups in 10 games (including playoffs).

“He’s a tall, lean guy at 6-foot, 180 pounds, but he was really strong on the bench and really wiry,” Walters said. “He tackles well and he’s physical. At that point, he was just too good of a football player from our grading to pass on.”

With the seven players selected and the draft done and dusted, the Bombers can look ahead to the 2020 season and getting back to the Grey Cup to defend their title.