O’Leary: A Q&A with Farhan Lalji on TSN’s cross-country draft

O’Leary: A Q&A with Farhan Lalji on TSN’s cross-country draft

It wasn’t the 4,000-plus kilometres between them that they had to worry about. It was the 1.5-second window that hovered over them, wanting nothing more than to create little bursts of havoc for their broadcast.

“We were all on about a second-and-a-half delay from one another,” TSN’s Farhan Lalji said on Friday morning from his home in Vancouver. From that same spot, Lalji hosted the CFL Draft on TSN on Thursday night. His counterparts: Dave Naylor, Davis Sanchez and Duane Forde, sat on a virtual panel with him from their respective homes in Toronto. Matthew Scianitti was woven into the broadcast throughout the night, interviewing players after they’d been selected.

“I think the hardest part for me was not having the ability to talk back to my producer. He could talk to me, but I couldn’t talk back to him when the other people were talking, to try to make sure I was ahead of where we were going.” 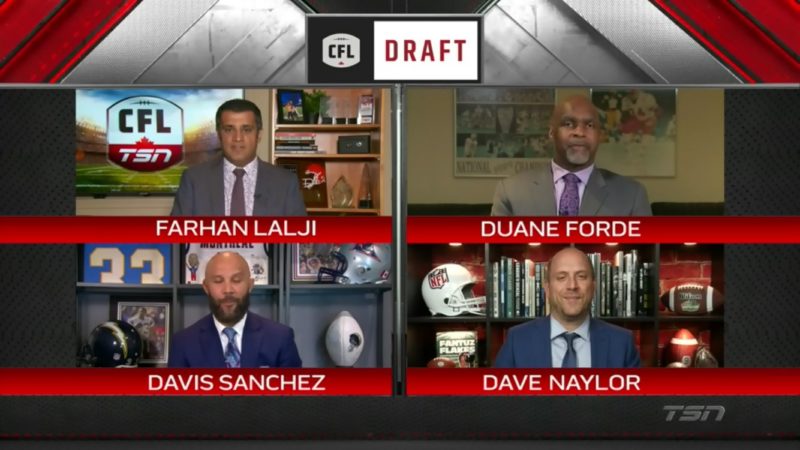 Farhan Lalji hosted the 2020 CFL Draft on TSN from his home in Vancouver while his colleagues Duane Forde, Davis Sanchez and Dave Naylor worked from home in Toronto (Photo: Farhan Lalji)

At the best, most normal of times a live broadcast will be laced with curveballs and challenges. We are unfortunately not in normal times. Stretching across the country and relying on strong wifi connections and good communication, TSN’s broadcast of the CFL Draft successfully navigated its share of uncharted waters, even if sometimes a panel member accidentally had a thought cut short.

“At the top of the show we were just about to set up the Stampeders (to make the first overall pick) and then all of a sudden while I’m talking the Lions and Calgary made a trade. When it first came into my ear I misheard it and thought they were saying Calgary and Toronto had made a trade,” Lalji recalled.

“I wasn’t sure, so I didn’t say anything. I threw to our next analyst to get their talking point and then was able to clarify what it was. It all happened so quickly. We weren’t in position to build a board and show the trade graphically, to make it make sense and things like that. So it was just a few little things like that.

“I’ve used the analogy that I felt like I was wearing my clothing inside out, where you could see the stitching.

“The hardest part for me was just not having that ability to communicate directly with my producer when others were talking. Other than that…having watched it back and everything I did, I think it was fine. I think all of those moments feel a lot worse on the inside than they look on the outside.”

In between a busy day of post-draft radio hits and TV interviews, Lalji took some time to run through what it was like working a football draft in a time of physical distancing. Our interview was edited and condensed.

Chris O’Leary: The CFL is a league with a long and sometimes funny history so I don’t want to say this has never happened before but I think you were the first non-commissioner to announce the draft picks. What was that like?

Farhan Lalji: You want to get the names right (laughs). It’s their moment. There was Matt Riley, everybody had called him, everybody had written him as Mattland, right? But when I looked at the league’s pronunciation guide, it said Matt. So I went with Matt and then the rest of (the panel) called him Mattland. Just something that simple, I really wanted to think about it because — and I didn’t get a chance to call him — but I should have called him and just said, ‘What do you prefer?’

Little things like that. You just want to get it right because it’s their moment. Then sometimes people will play that (down the road). ‘With with the seventh pick…’ You want make sure you say it right and as a guy that’s had his name butchered many times I appreciate when people say it correctly, for sure.

CO: What was your favourite part of the night? Did you have something in the broadcast that will stick with you?

FL: Probably just welcoming everybody into our living rooms. Simple as that. The rest of the night became a little bit formulaic, just because it needed to be. Just the ability to welcome everybody into our houses and you know, ask the guys if they were wearing pants (he laughs).

We actually rehearsed that and it didn’t work because of the delay. I just said to the guys in between that I’m going to say that and you just chuckle and I’ll move on quickly and we’ll get into it. But sometimes you don’t get to be as organic as you want to be.

Then the trade in the beginning and I just kind of felt like we go through this all the time where ther’s a lot of trades at the top of the draft. Usually it happens a couple of minutes before and you’re at least able to work through it. But there are times when we just take our (pre-production) rundown and we throw it away, right?

The rundown starts and before the first block is over, you’ve just thrown it away because everything has changed from the first commercial onward. It didn’t have that level of change, it was just the one trade but I think there was that level of intensity there and adrenaline there when that was happening.

Beyond that there are certain players that obviously, I like talking about. I was really happy that Nathan Rourke was picked in our live session.

I’ve gotten to know Nathan a bit over the last three years since he first arrived at Ohio and I built a bit of a relationship with him and I think all of us collectively wanted to talk about him. I think one of the hard parts, as I’ve said before with the CFL draft is that we talk about linemen. And with all due respect to the linemen, who are so important, to the general public it’s just a little less entertaining, right?

The live video you have of those people is a bit of a challenge. The two biggest challenges of our draft is one, the games aren’t broadcast during the season. So we don’t have high quality production footage. We’re relying on coaching footage. Then this year that got compounded by the fact we didn’t have a combine.

Most years, we would have had multiple cameras at the combine shooting production-quality footage that we could have used. We didn’t have that. So we were relying on in some cases, home footage of a guy’s pro day or his virtual pro day.  You look at the NFL and they deal with a little bit of that stuff as well, but they still had (some) combine, they still had their actual ESPN games in the hole.

The other problem is is we’re not talking about star players that people are going to be talking about all the time. We’re not talking about Mike Reilly and Bo Levi Mitchell. So just to have the opportunity to talk about a quarterback at that point in the draft, I think was really valuable to the show, just like it is to the league. I think the league debates it all the time, about the importance of a Canadian quarterback and those opportunities. It’s just as important on the television side when we’re doing a draft. 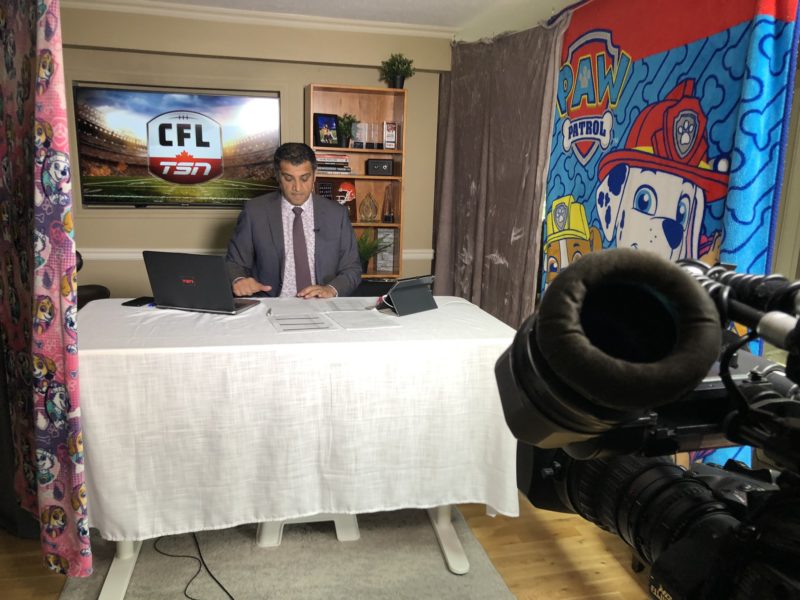 CO: You mentioned the lack of a combine. How much of a challenge was that for you in terms of your prep, being able to do your homework and get to know these guys this year?

FL: It was huge, for sure, because I would probably say I put about 20 hours into the draft in the six months prior to the combine, which which isn’t a significant amount. Then you go to the combine and that’s when you first start talking to the players and seeing them personally. Just like the GMs, they’ve talked about an ability to not see the players in-person having had an effect.

From the Lions perspective, not truly knowing what (Isaac Adeyemi-Berglund’s) height was impacted their wants in the first round. For us, seeing them helps. It certainly helps the analysts more than it helps me but I get a chance to get some face time with probably 15 of them over the course of the draft weekend, and just say, ‘Hey, how you doing?’ and get to know them a little bit. My process truly begins there. It certainly was an accelerated process for me that, you know, the combine would have made it easier.

CO: Looking at what teams did on Thursday night, who impressed you the most?

FL:  I’d probably say Toronto, at least at the start of the draft. When I look at the Argos, I thought it was a reach to take a receiver with the No. 2 pick initially. And I know that there are a lot of other pulls to the player because of his brother and the Raptors and the storylines and the marketplace.

I get that but just from a pure football standpoint, knowing that they added two quality Canadian receivers and potentially T.J. Jones (in free agency) if this thing ever gets worked out, I looked at that and I thought, hmm. Because they could have had a plug and play lineman. But then you look at what they were able to get out of their first four picks, I thought in the end it turned out really well. They still got a quality lineman (Theren Churchill) a little lower in the draft. He’s not as plug and play as (Tomas Jack-Kurdyla) but I think he’s still got got a good ceiling.

Then for them to be able to get the two players they got in the second round (LB Jack Cassar and DL Sam Acheampong). You know, Acheampong as a territorial protection was a steal. He’s a player that I think in three years or four years, we could be talking about him in Cleyon Laing terms. Those four picks I thought were quality, quality players when the dust settled.

And when I say a reach on (Dejon) Brissett, that’s not a reflection of the player. That’s just more of a need-based commentary and where receivers generally tend to go commentary. But I really like Jack Cassar a lot. I think he’s going to be a starting player in this league. When you when you look at it, they may have landed four starters. Not Day 1 starters, but guys that’ll be impact players within the next two years.

CO: Anything else jump out at you?

FL: I liked what Winnipeg did, given the fact they didn’t get a pick until No. 18. From the kicker (Marc Liegghio) to (receiver) Brendan O’Leary-Orange to the DB from Mac (Noah Hallett)  I think he’s a tremendous athlete. I thought given where they were coming from in the lack of draft capital they had, I think Kyle (Walters) really maximized what he was able to get.