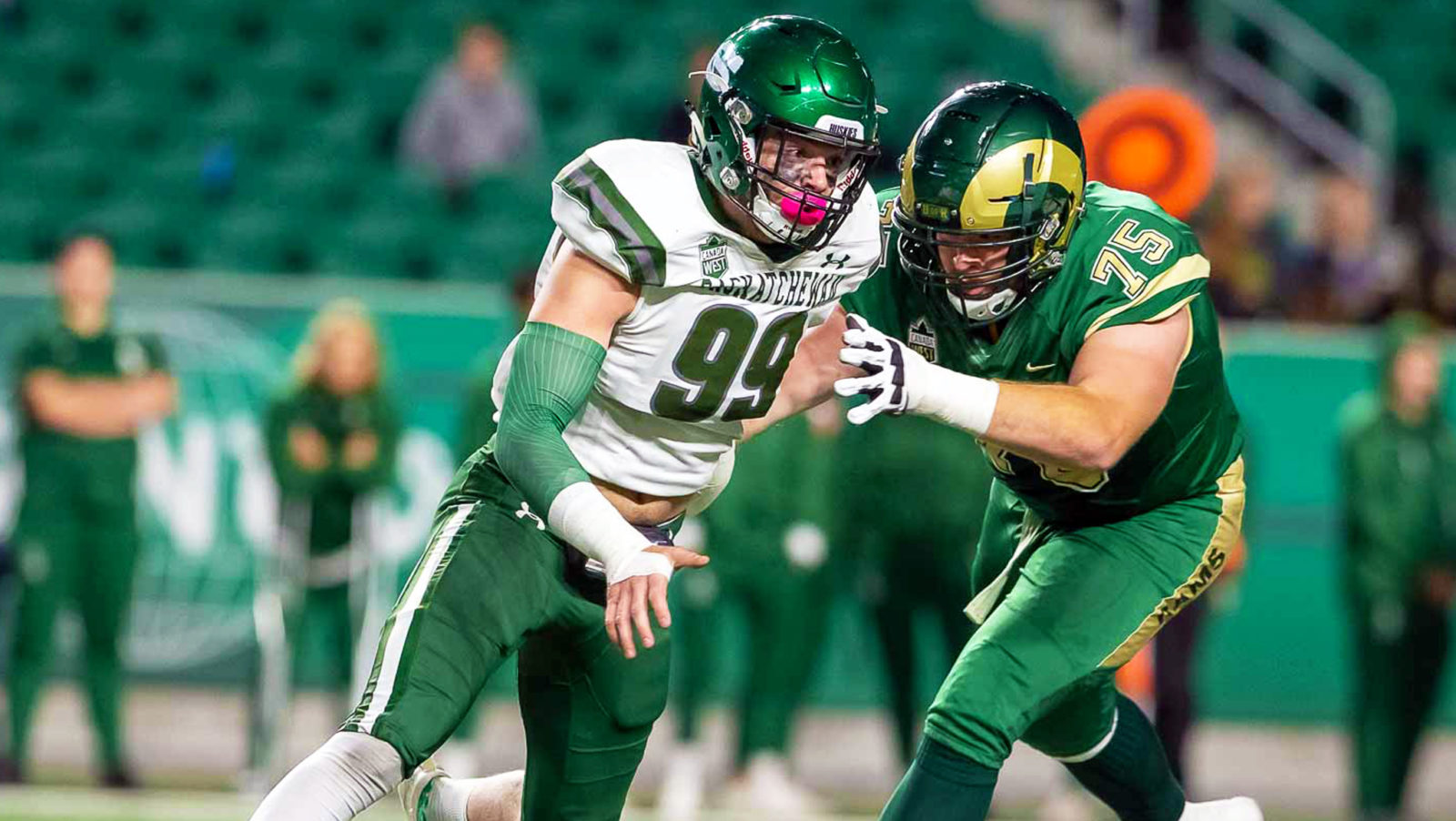 Courtesy: Get My Photo

Smack dab in the heart of Riderville, in the east end of Regina, a small pocket of Winnipeg Blue Bombers fans gathered around the television and the computer last Thursday night to watch the 2020 Canadian Football League Draft unfold.

And by night’s end they were celebrating a development: one of their own – University of Saskatchewan defensive end Nick Dheilly – had just officially become a member of their favourite club.

“My dad was saying this is fate,” began Dheilly. “It’s funny, we grew up in Regina, but we always used to wear Bombers jerseys to Labour Day. It was the funniest thing ever, having all these fans yelling at you.

“My dad is from Brandon; I’ve got grandparents in Brandon and Dauphin and a few uncles in Winnipeg. It’s pretty ironic that I got drafted there. It’s cool. I’ve got a lot of people in my family who are very happy.”

RELATED
» O’Leary-Orange: ‘It was just the greatest phone call in my life’
» Ferguson’s 5 draft thoughts
» A team by team look at the 2020 CFL Draft 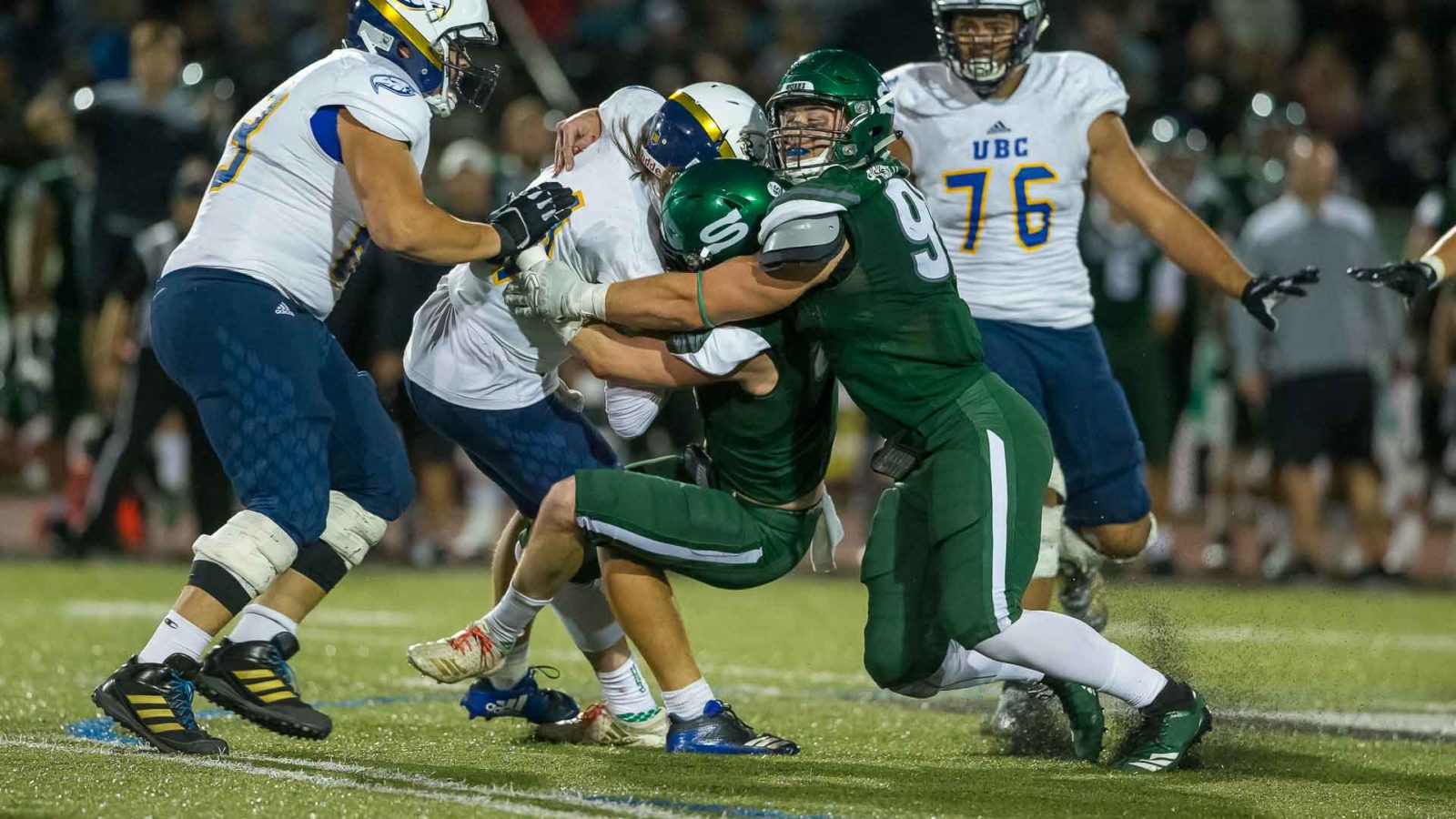 The Bombers selected Dheilly in the fifth round, 46th overall, last week capping what had been an anxious and ultimately emotional day for the Regina product, a Canada West All-Star last year after registering six sacks, 11 tackles for a loss, an interception and 24 tackles in 10 games, including playoffs.

“It was pretty nerve-wracking after the first few rounds went by because I was projected to go in the second or third round,” said Dheilly. “So, after the third round went by I got some big jitters. Then the fourth round went by and I couldn’t even look at the computer by then… I just put it away, put my phone in my pocket and went outside.”

“Then I got a call from Mike O’Shea and it was probably the best moment of my life. I was just so happy someone took a chance on me and wanted me to come to their program. Honestly, at that moment all the nerves left. I was just so relieved. I was stressing pretty bad.

“At the same time, getting drafted in the fifth round put a chip on my shoulder and I can’t wait to get to camp and show them that I am a Top 10 talent. I can’t wait.”

The Bombers called out Dheilly’s name on Thursday because of his speed – Bombers GM Kyle Walters described it as ‘twitchy-ness’ – and because of his athleticism. That’s an enviable combination at end, and just so happens to perfectly match the CFL’s Most Outstanding Defensive Player in 2019, Willie Jefferson.

“It’s kind of funny, but I’ve been modelling my game on Willie Jefferson over the last few years,” said Dheilly. “It’s so ironic… Willie obviously isn’t the prototypical defensive end, either. He’s tall and lanky, quick and powerful.

“I think it’s awesome I got drafted by the Bombers and Willie Jefferson is there. To be able to learn off him, to be able to be there and just learn, learn, learn… I’m so glad to be drafted there. I was on the phone with (Bombers defensive coordinator) Richie Hall and I told him I can’t wait to go out and see Willie Jefferson. It’s like a star-struck thing for me. And Jackson Jeffcoat, he’s unreal, too.

“From my perspective, that makes this the best fit for me from every other team in the league. Getting the chance to learn from those two guys makes me really happy.”

Dheilly began his college career with his hometown Regina Rams – younger brothers Noah and Dominque are receivers there now – and as a freshman was the Canada West Rookie of the Year and the school’s Male Athlete of the Year.

He followed that up with a Canada West All-Star nod in his second year and then, wishing to be pushed more, opted to transfer to the Huskies to learn from former CFLers in head coach Scott Flory and defensive coordinator Warren Muzika. During the year-off transfer period, he suited up for three games with the Okanagan Sun, before joining the U of S last year.

And now, like everyone else, he waits. Waits for this COVID-19 pandemic to pass and for governments and health officials to give the green light to a return to playing.

“I hate this right now because this is when camp usually starts,” said Dheilly. “While we wait for the news all you can do is workout. My grandparents bought us a squat rack and me and my brothers are always working out together, pushing each other.

“At first I was worried about where I was picked in the draft. But my coaches and everyone have been telling me all those picks – first round, second round, each round – we all have to go to camp and prove it all over again.

“It won’t matter when you got picked when you get to camp. We’re all being put in the same situation with a chance to make the team. That’s where my mindset is now. It’s about who can play and I want it to start right now because I’m so excited.

“I can’t wait to be a part of Bomber Nation.”