Lucky 13: How Czech-Canadian DE Alain Pae landed with the Esks 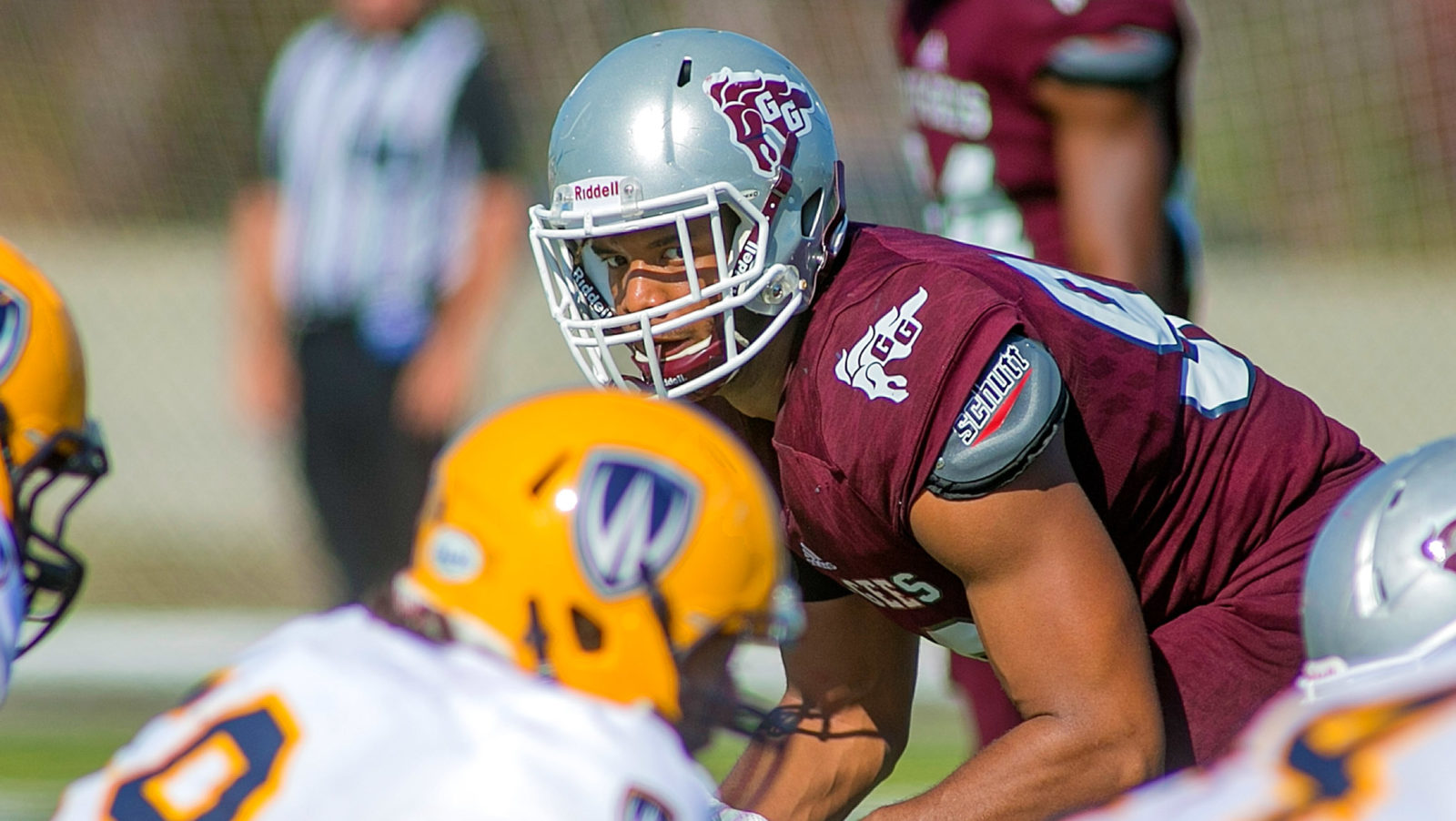 Lucky 13: How Czech-Canadian DE Alain Pae landed with the Esks

When the Edmonton Eskimos made Alain Pae from the Czech Republic the 13th overall pick in the 2020 CFL Draft there were more than a few raised eyebrows.

Although he was on the radar of a couple of teams, the six-foot-four, 240-pound Pae hadn’t played football in two years and only one season, his last, in Canada.

Huh? On the face of it, it was an unusual choice.

He had come to Canada straight from the Czech Republic and had only started playing in his home country at the age of 22. The other prospects in the CFL Draft were all about 22 years of age and had been playing all their lives.

So what’s the catch?

Well, Pae’s freakish athleticism and speed — he was clocked at 4.65 seconds in the 40 yard dash and broad jumped ten-feet, two-inches — is what made scouts and coaches take notice.

Eskimos’ GM Brock Sunderland was aware that three teams had been hoping to invite the Prague native to their mini camps and another wanted to sign him to their 90-man roster. So Sunderland grabbed him quickly, taking him early in the second round. When asked what jumped out about him Sunderland was quick to answer.

“His size and athleticism, he jumped off the film. If you have someone — even if you weren’t evaluating him and he would jump off the film and you would notice him — that’s someone you want to look at deeper. He did that,” Sunderland said.

“(He’s) very explosive, has good size. He hasn’t played for a couple years, we’re aware of that but he’s in shape and has been working out recently.”

“He’s already developed a lot in a short period of time since coming over from the Czech Republic,” Ferguson said.

“The one season of U SPORTS football — it was his baseline and not even close to his ceiling — and he was excellent. He can be a ratio-changer as a defensive end.”

The 27-year-old Pae may have come to the game relatively late for a football player but his discipline and determination are traits that have followed him all his life. Gymnastics is one of the most demanding sports in the world and Pae thrived as a gymnast until he grew too tall.

“I was a gymnast for nine years, until I had a growth spurt in my late teens and grew too tall for the horizontal bar,” he said. “I had to find another sport. I tried basketball and enjoyed it and I also played soccer. But when a friend introduced me to football, I fell in love with the game.”

That gymnastics background has obviously served him well on the football field. His flexibility and explosiveness were apparent early on. 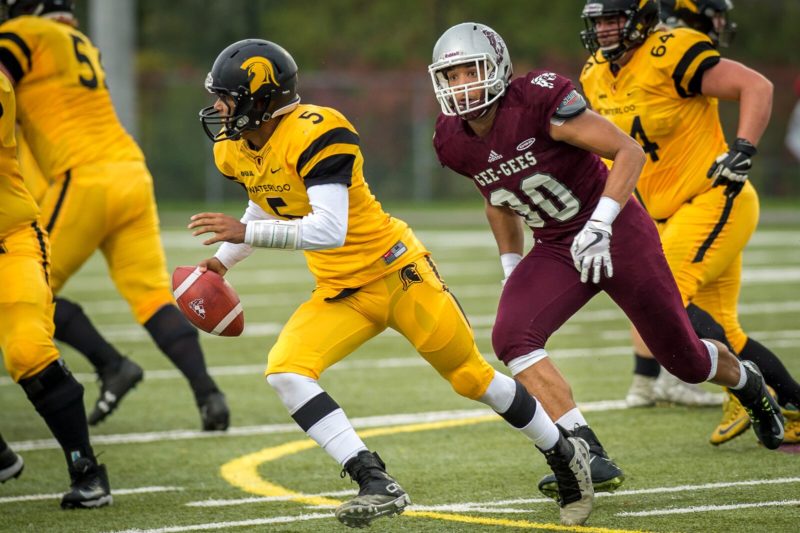 Zach Harrod, head coach of the Prague Lions, said that Pae’s athleticism was the first thing that he noticed as he picked up the game.

“You can’t teach or coach his level of athleticism,” he said.

“Beyond this though, once he realized that he could be good, his drive to do whatever he could do to maximize his abilities stood out more than his athleticism.”

In his very first season of football, he was playing almost like a veteran according to Harrod. Of course, his athleticism helped speed the process.

“Alain caught on pretty quick. When you have that kind of speed and size together, it makes up for learning techniques and the little nuances of the game.”

There’s no question he learned fast. In his two seasons, 2015 and 2016, he made an impact. In 10 games, he amassed 46 tackles including three tackles for loss for 86 yards, five sacks and eight quarterback hurries. Once he arrived in Canada and joined the Ottawa Gee Gees, it was clear that he was the real deal. His lone season with the team in 2017 was a roaring success. Pae notched 25.5 tackles and six sacks in eight games on his way to OUA Conference All-Rookie team honours.

He thought he would have one more year of eligibility left since he had only missed the cutoff by four days. Unfortunately, his appeal went for naught. So, for 18 months he became the closest thing to being a member of the team without being one. He worked out with the other players and cheered them on from the sidelines. His dream was to play in the CFL, so he kept working hard. Still, you would think he would fall off the radar.

He wasn’t about to let that happen.

Rob Fry is a player agent and had been in contact with Pae at the end of the 2017 season. He had been impressed with his football skills and physical abilities but what struck him most of all was his perseverance.

“It was obvious during his one season with the Gee Gees that Alain could play,” Fry said.

“Once he discovered he had no eligibility left, I figured he would let it go. But his desire to play and his incredible determination kept him going. He started sending out videos of his workouts, doing all kinds of amazing moves. CFL scouts and coaches were definitely kept in the loop.” 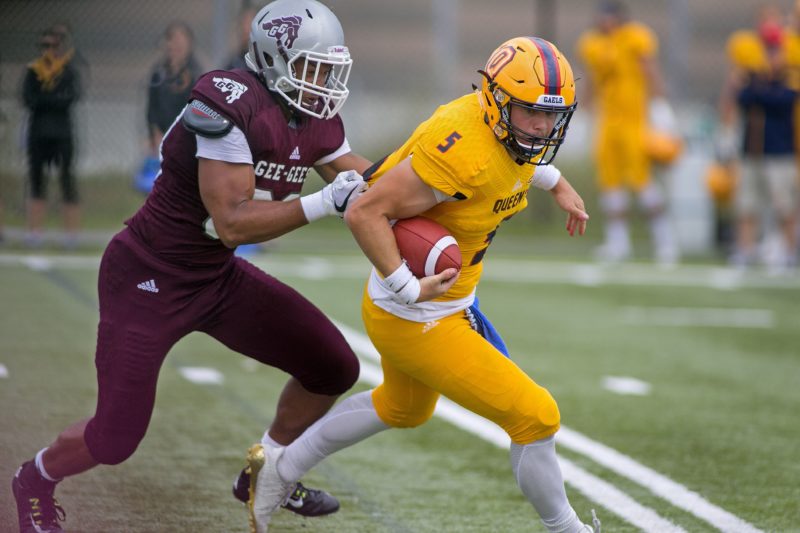 When COVID-19 was closing borders around the world, Pae followed his father’s lead and became a Canadian citizen, making him eligible for the CFL Draft (Photo: University of Ottawa athletics)

He had been searching for a way to enter the CFL’s global combine and draft but that process was put on hold by the COVID-19 crisis. So he tried a different tactic. Pae’s father had become a naturalized citizen a few years ago, so Pae took advantage and applied for Canadian citizenship. In early April, he received his Canadian passport and became eligible for the CFL Draft.

Suddenly he was a valuable commodity. All nine CFL teams showed interest. Even the Atlanta Falcons wanted to bring him to a mini camp.

Fry was blown away by his will to play.

“His tenacity is pretty amazing. That, along with his height, power and arm length had teams ready to take a chance,” he said.

Brett Morgan is a scout for the Calgary Stampeders and has also coached in Europe. He was well aware of Pae while he was still playing in Prague.

“I know his coach Zach Harrod and was familiar with how well he regarded him. With his citizenship possibilities, I continued to monitor him and his development. He’s a good prospect. We (Calgary) drafted a defensive end in the first round, but Pae has upside as a rusher.”

Sunderland is more than satisfied with his choice and naturally has plans for him as he explained to TSN 1260 this week.

“He’s been dialed in. This is a player that, this is a big part of (why he was chosen): The numerous conversations we’ve had with him and the people around him, he loves football. The expression we use is he’s jumping out of his skin to play football,” Sunderland said.

“He went from Prague to Ottawa to do it, he stayed in shape…and to stay in shape the way he did speaks a lot about the athlete he is and how much he wants this.

“There were other calls as well from people I know in the NFL that had interest in him. What we think we’re getting as a person and a player,  we think he’ll come in with the right attitude and ready to go.”

According to Sunderland, despite Pae’s age, he doesn’t need to jump in and play right away.

“We have so much depth on our defensive line with Canadians already, that we’re not in a position where we have to rush him,” he told TSN 1260.

“We thought the upside with him, we think he has the chance to be extremely explosive. He’s a big guy…with rare explosion and burst and we think the sky’s the limit. We can be patient and not rush it. We think with the potential he has, what he can be, it was worth it.”

All Pae wants to do now is get out on the field.

“This has been an amazing journey and I am so thankful to the Edmonton Eskimos for the opportunity,” he said. “Now I want to get out there and prove to them they made the right choice.”