Schaffer-Baker: ‘I’m trying to be the best version of myself’ for Riders

Schaffer-Baker: ‘I’m trying to be the best version of myself’ for Riders

The 6-foot-4, 195-pound receiver from Mississauga, Ont., made waves at the 2020 CFL Ontario Regional Combine, posting an impressive all-around performance following a solid career at the University of Guelph.

“It’s been a long journey for sure, and it’s something that I had to work very hard for and keep pushing towards. But I think it’s been nothing but a great experience” Schaffer-Baker said. “I think I ultimately decide how my future will unfold. I just have to continue to keep working hard and keep trying to be the best version of myself.

“I just want to be great and I get that there’s a lot of sacrifices and I’m happy to do that. I’m just going to keep the faith.”

After being selected with the 30th overall pick in the 2020 CFL Draft, Schaffer-Baker is looking forward to living up to the expectations that come with being one of the top receivers off the board. 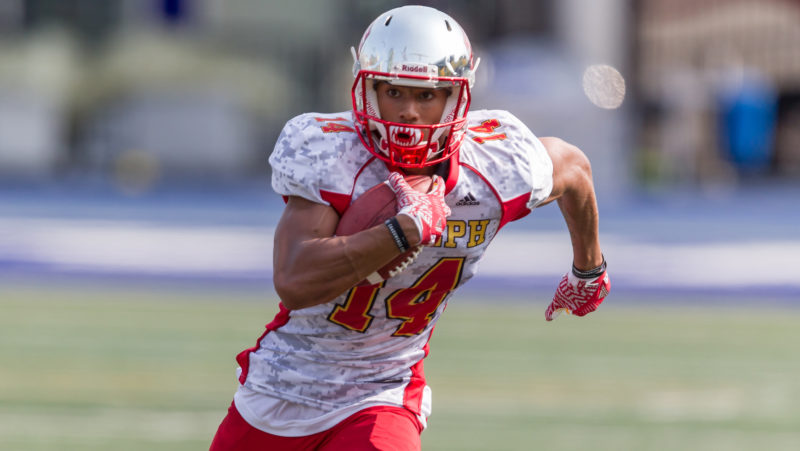 Kian Schaffer-Baker was selected by the Saskatchewan Roughriders with the 30th overall pick in the 2020 CFL Draft. (Kyle Rodriguez/Guelph Athletics)

From the second he stepped on campus at Guelph, he proved to be a contributor. Schaffer-Baker appeared in all eight regular-season contests for the Gryphons during his first year with the program, making 20 catches for 388 yards and a touchdown.

He credited his first campaign as the one that helped him along the most in his development as a prospect.

Schaffer-Baker finished with at least 20 catches and over 300 yards in each of his four U SPORTS campaigns.

Ahead of his final year, he appeared at the East-West Bowl, where he was able to compete alongside some of the top competition that the country has to offer. Schaffer-Baker finished the game with five catches for 126 yards and a major.

Schaffer-Baker knew he had the ability to put up numbers like that on a regular basis, it was just about putting in the work to get to that level.

Over the last number of years, Schaffer-Baker has been working out with Toronto Argonauts’ strength and conditioning coach Shea Pierre. He’s also coached by four-time CFL All-Star and 2012 Most Outstanding Player Chad Owens, who’s helped him work on his game as a whole.

“It’s been nothing but amazing. I’ve been able to pick his brain and learn from him because he’s got so much knowledge and insight from playing over 10 years in the CFL and NFL,” Schaffer-Baker said. “It’s been a blessing to be able to work with him and Shea and the staff. They’ve pushed me beyond my limit and helped me achieve things that I’ve set out for myself.

“One thing I’ve always witnessed in him is his work ethic and what he brings to the table every day,” he said about Owens. “He’s just so enthusiastic in everything he does and his passion for the game just separates himself from the others.”

Owens accompanied Schaffer-Baker to the CFL’s Ontario Regional Combine back in March.

“I think from the start of the process, I had numbers written down on a whiteboard and those are kind of what I was hoping to achieve,” Schaffer-Baker said of his expectations for the combine. “I actually didn’t hit any of the numbers; I failed in all those categories, but it was definitely a good learning experience and I thought I got a lot better from it.

“It’s something that I can continue to keep working on and striving for.”

Schaffer-Baker set himself apart from the rest at the combine and started gaining hype heading into the 2020 CFL Draft. He also had a cheering section at Varsity Stadium on the day, consisting of Pierre and Argonauts receiver, and fellow Mississauga native, Natey Adjei.

Following the Ontario Regional, it was time to look towards draft day and where the next stop on his football journey would be.

The first three rounds saw four pass-catchers leave the board. Schaffer-Baker was still available when the fourth round rolled around. Then, he received a call from Riders head coach Craig Dickenson, who excitedly told him he’d be headed West to join the Riders.

“I was just trying to be present in the moment and embrace everything that was going on,” Schaffer-Baker said. “(The draft) is something you’ll only get to experience once in your lifetime, and I had my family there; my mom, my brother and sister, my grandpa and my girlfriend were all able to be there and just enjoy the time and celebrate.”

Riders general manager Jeremy O’Day was able to add some extra help around 2019 MOP nominee Cody Fajardo with the team’s first two selections, picking up Saskatchewan offensive lineman Mattland Riley before scooping up Schaffer-Baker in the fourth round.

Schaffer-Baker will join a stacked Riders offence, led by the aforementioned Fajardo, who’s just finished his first season as a full-time starter. As for the receivers room, he joins the Shaq Evans, Kyran Moore and Jordan Williams-Lambert while being able to develop alongside 2019 first-round pick Justin McInnis.

“They’re all exceptional players and I’m just excited to go in and pick their brains and go in and compete with them,” Schaffer-Baker said. “Whoever is the hardest working, I want to be working just as hard as them. So I’m just ready to go in and learn from them and take my game to the next level.”

Schaffer-Baker was also able to get an idea of what to expect in Riderville from Owens, who spent the final season of his career in Saskatchewan, where he appeared in three games for the Riders back in 2017.

“He had nothing but praise of the organization,” Schaffer-Baker said. “He said that there’s nothing better than playing in front of that fanbase. So he just said to go in, embrace it all and get ready to work.”

The Riders have returned to being one of the top squads in the entire league after making it to the Western Final in 2019.

Schaffer-Baker is being looked at as one of the under-the-radar picks that could be someone with a huge ceiling in the pros.

“Hearing that just pushes me and drives me to be that much better,” he said. “People have those expectations and now it’s my turn and my goal to fulfill them and exceed them and just continue to seek perfection.

“I’m trying to be the best version of myself for the team, the players and the coaches and prove to everyone that I fit in the system and that I’m ready to go.”