CFL.ca presents ‘Off-Season Depth Chart’, a series of articles reviewing every team’s depth chart at is stands to date.  Note that these are not official team-issued depth charts, but projections based on insight and analysis from around the league. Additionally, 2020 Draft picks are not included.

TORONTO — Armed with a new general manager, a new veteran pivot and a re-tooled secondary, the Toronto Argonauts depth chart looks mighty different from a year ago and there should be no surprise based on how the 2019 season unfolded.

The Argos have made no secret as to what their priorities have been since November of last year — stockpile quality Canadian talent and renovate a defensive backfield that gave up the most passing touchdowns and the third most yards through the air.

There is no doubt that Toronto’s most significant signing, Matt Nichols, enters as the odds-on favourite to take the starters role under centre ahead of four-year veteran McLeod Bethel-Thompson but who he has to pass to is almost as meaningful. 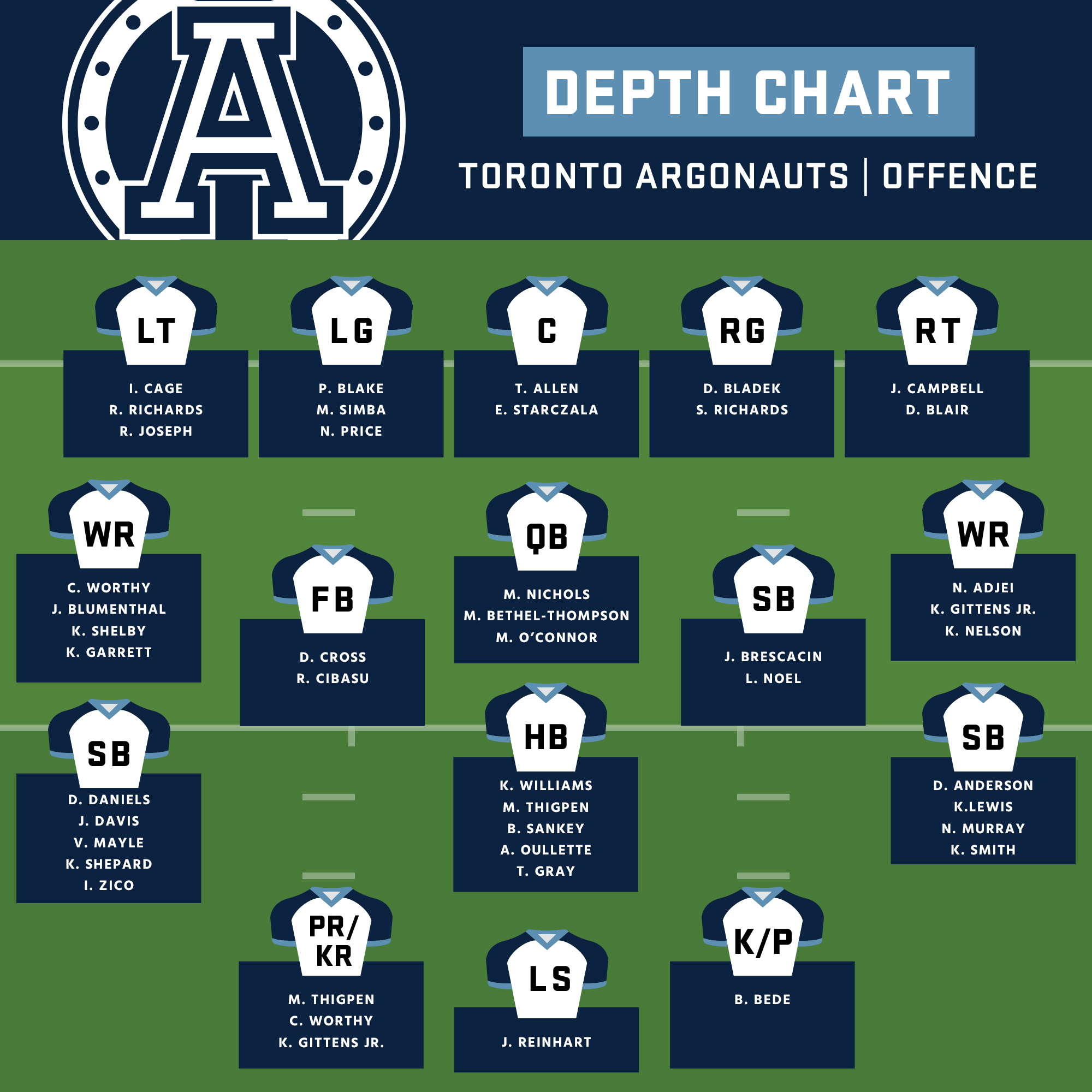 The addition of Dariusz Bladek and Philip Blake give the Argos something to think about in the trenches.  Either could slot in at centre to replace Sean McEwan but the Argos will likely have the luxury of starting an American at that position.  One would have to go back to 1997 (Mike Kisalek) to remember the last time the Boatmen consistently dressed an American at that position.

Tailback is another unknown at this point.  Former Buffalo Bills rusher Karlos Williams could be the favourite based on his resume but with James Wilder Jr. and Chris Rainey gone, it will be open competition in the backfield.  The Argos also added veteran hybrid back Marcus Thigpen but he could line up inside at a slot position as easy as he could at running back (as seen above).

Defensively, GM Michael ‘Pinball’ Clemons and his staff have gone with experienced cover corners and a group of Canadian DBs as good as any in the division.  Rangy DB Tommie Campbell is likely to hold things down at the wide-side corner while the boundary corner could be taken by a group of Canadians, led by Arjen Colqhuoun and sophomore draft pick Matt Boateng.  If the Argos are able to go National at the boundary corner, they could move Shaq Richardson back to the SAM linebacker spot where he played the majority of his tenure with the Calgary Stampeders.

Former Als defender Bo Lokombo will likely drop to safety, allowing the leader of the secondary, Alden Darby to move over the halfback with Jeff Richards.

With Richardson at SAM, another National, Chris Ackie, could take over at the other outside linebacker spot while Bear Woods and Jeff Knox Jr. patrol the middle.  Although, the Argos are pretty thin at middle linebacker at this point so don’t be surprised if some of the many players listed outside get a shot to take reps in the middle whenever camps open. 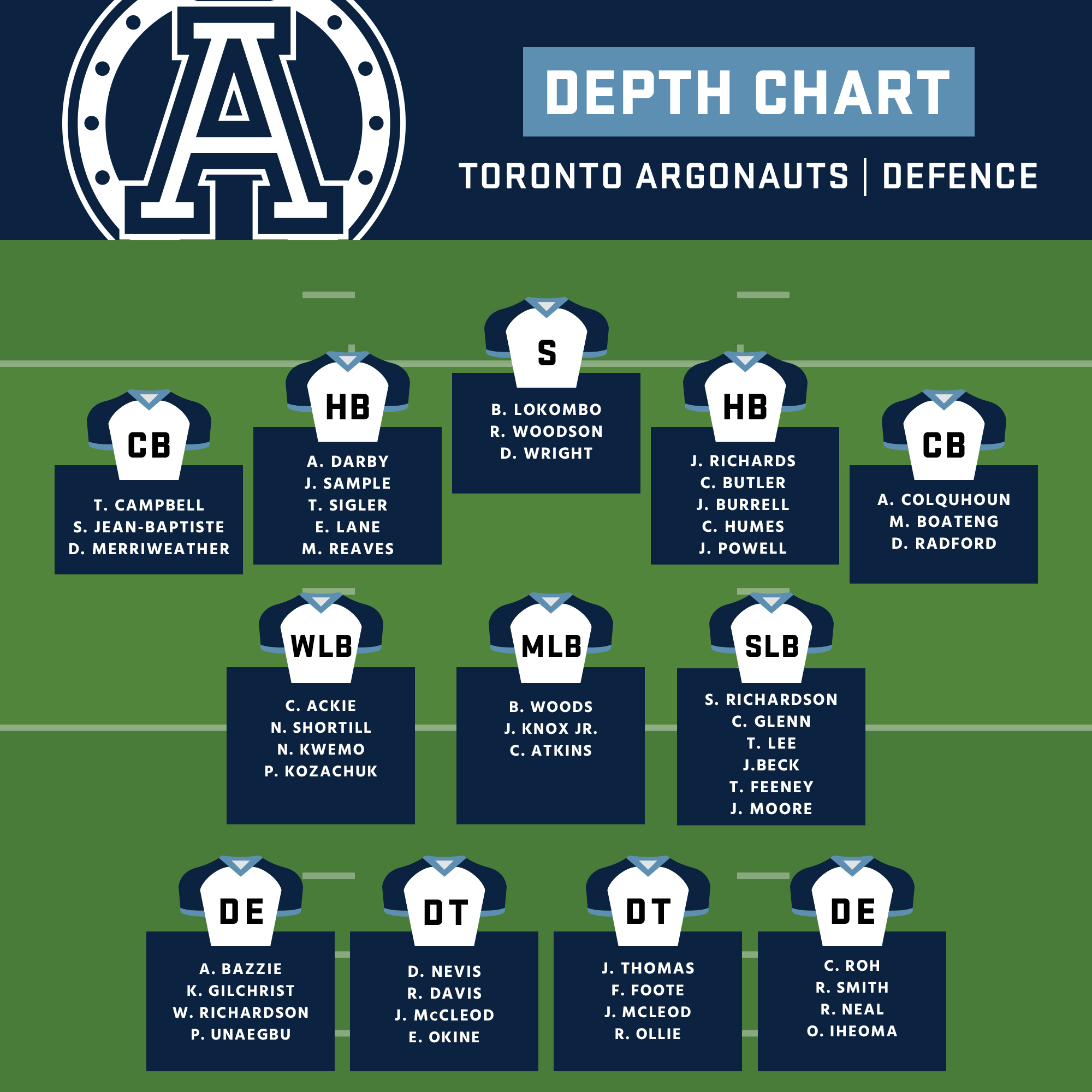 It is a complete overhaul along the defensive line.  Pass rushers Alex Bazzie and Craig Roh, along with hulking defensive tackle Drake Nevis, have all been platooned in from the West, while veteran National Fabian Foote has been added from the Als.  Foote is likely to battle Jhaustin Thomas who made a case midway through last season that he could be an option on the interior of the defensive line as well. A group of free agent Americans will all vie for spots to fill out depth left by many who the Argos let walk during free agency.

A team that brought over five kickers to training camp last year, has just one on their roster at this point.  The hope right now is that former Alouettes kicker Boris Bede will handle all the kicking assignments while Thigpen is the early favourite to handle the majority of the return duties.

New head coach Ryan Dinwiddie will have no shortage of position battles around him when camps do indeed open.  How long this virtually retooled group can come together as a team in a new system will be define the first part of this Argos rebuild.