Hungry for More: Bombers pushing for back to back 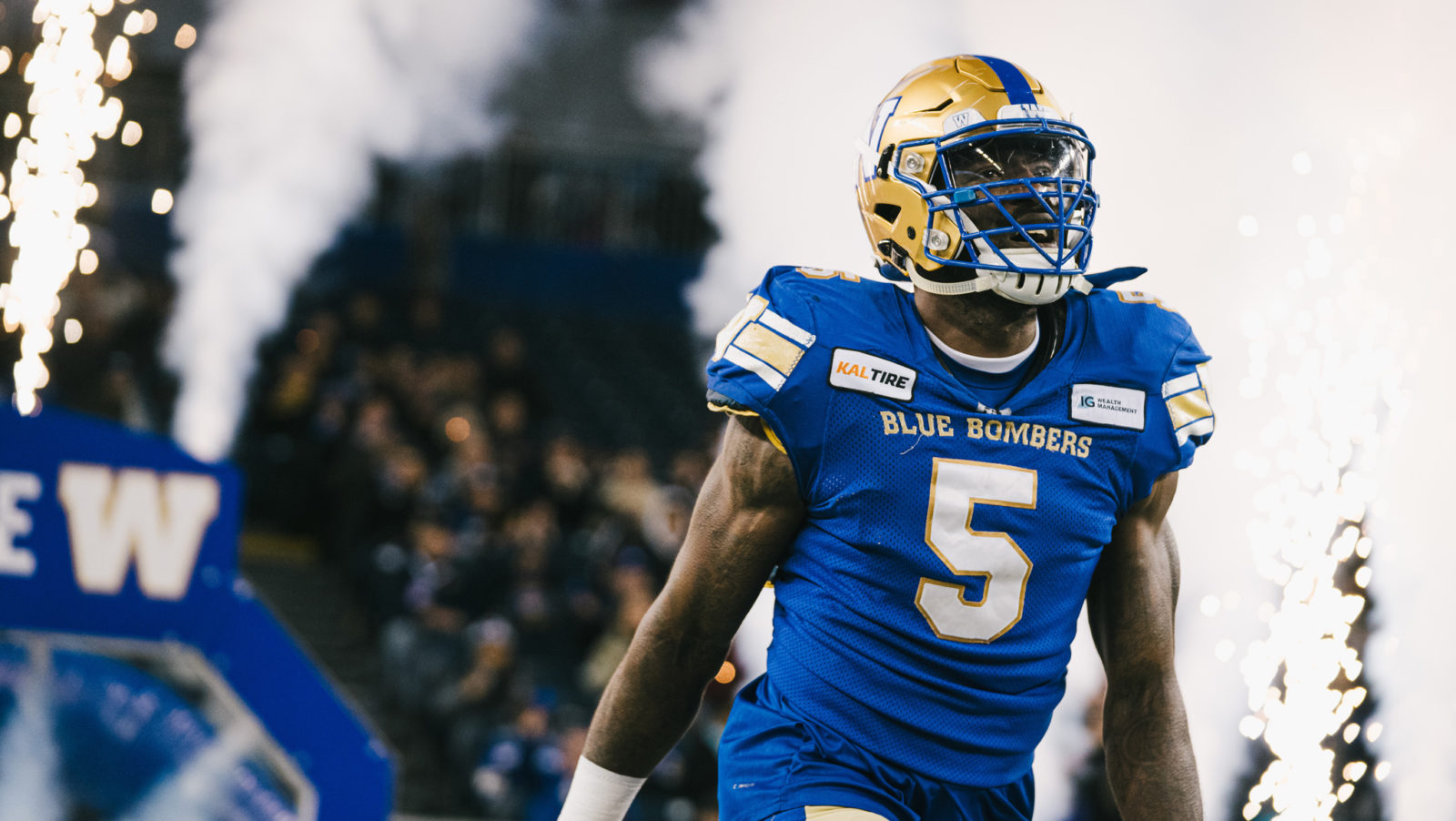 Hungry for More: Bombers pushing for back to back

WINNIPEG — The Winnipeg Blue Bombers reached the pinnacle in 2019, using their dual-pronged quarterback attack and stout defence to snap a 29-year championship drought.

But how do you sustain the roster with the constant fluctuation in the Canadian Football League?

Winnipeg did lose some individuals in the off-season, but the bulk of their losses came from players signing NFL deals — a great indicator of team success.

The Bombers were relatively quiet in terms of adding talent to the offensive side of the ball this off-season. A pair of crucial moves regarding the Bombers’ offence dominated the headlines.

Ahead of free agency opening, offensive coordinator Paul LaPolice was considered one of the leading candidates to fill one of the many head coaching vacancies around the league. He opted for a move East to join the Ottawa REDBLACKS.

The other pressing matter was the situation at quarterback. All three individuals who started for the Blue and Gold during the 2019 campaign — Matt Nichols, Chris Streveler and Zach Collaros — were all set to hit the open market in February.

Streveler opted to take his chance down south, signing a futures contract with the Arizona Cardinals. After that, the Bombers released Nichols and inked an extension with Collaros, who helped them capture the 107th Grey Cup presented by Shaw. 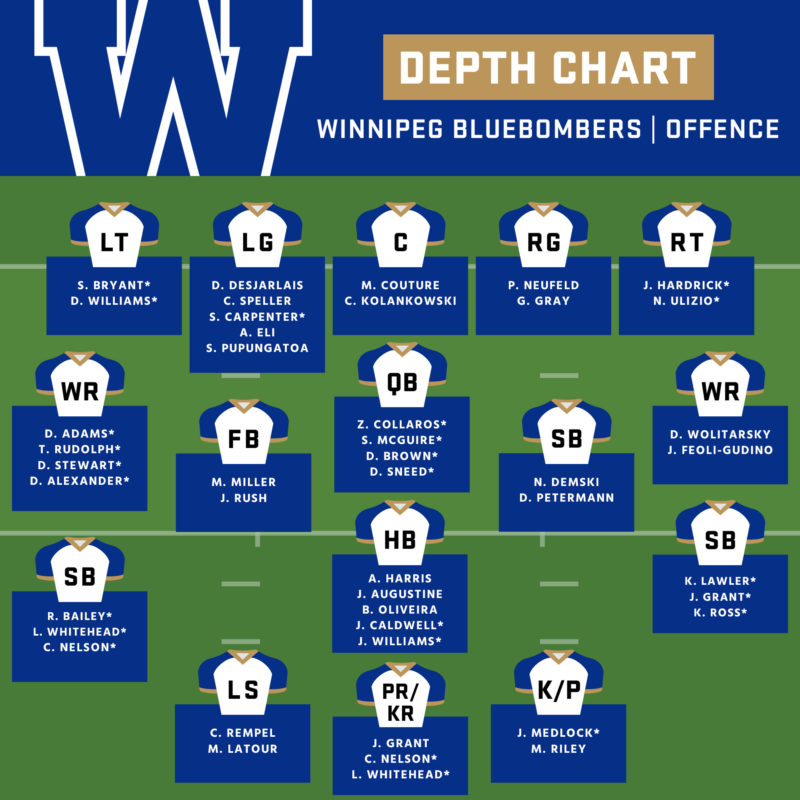 Collaros will still be surrounded by a bevy of talented playmakers. 2019 Grey Cup Most Valuable Player and Most Valuable Canadian Andrew Harris will one again be a force out of the backfield. The Bombers have continued to focus on keeping the running back position National, as Johnny Augustine and Brady Oliveira will be the main backups.

Augustine showed promise as a rusher with limited reps last year and Oliveira also proved to be an exciting prospect before suffering a season-ending injury.

The Bombers’ No. 1 receiver will be Darvin Adams. After a down year in 2019, he’ll be ready for a bounce-back. He’ll be joined in the passing games by Nic Demski, Kenny Lawler, Drew Wolitarsky and Rasheed Bailey.

Demski and Wolitarsky have track records as playmakers in the league, but both Lawler and Bailey came on the scene and impressed with the team last year.

In terms of the offensive line, 2019 fourth overall pick Drew Desjarlais looks ready to become the full-time starter at left guard for the team. Other than the second-year man, the regulars return to the fold. Stanley Bryant and Jermarcus Hardrick will lock down the edge while Michael Couture and Pat Neufeld will help solidify the middle.

On the other side, the Bombers did suffer some major losses. The biggest hit came to their secondary, as both Winston Rose and Marcus Sayles pursued NFL opportunities with the Cincinnati Bengals and Minnesota Vikings, respectively. Their biggest new addition was the signing of Josh Johnson, who played all over the secondary for the Edmonton Eskimos in 2019.

He spent the majority of his time with the Esks at boundary corner and halfback, so with Sayles’ spot being up for grabs, he can slot in seamlessly. Brandon Alexander started the Grey Cup at safety and would be able to assume that position full-time. Nick Taylor fills out the deep third at the moment after he proved his worth despite limited reps.

At corner, the Bombers could do a number of things. Johnson could very well be the boundary corner to start the year, but Mike Jones also had a lot of experience in that position and would allow Johnson to further strengthen the defensive backfield elsewhere. Kerfala Exume will also be a man to keep an eye on if the Bombers want to tinker with the ratio on the defensive side.

Winnipeg is most likely to use a newcomer at field corner. Luckily for them, they landed Damian Swann, who has NFL experience and was a playmaker during his collegiate career at Georgia. That is likely to be the position that has the most competition.

The second level remains unchanged for the most part. Adam Bighill will continue to hold down the middle of the field while being flanked by Kyrie Wilson and Mercy Maston. Micah Awe was also brought in to provide depth at the position. He’s a physical linebacker who’s played at both MIKE and WILL during his CFL career. 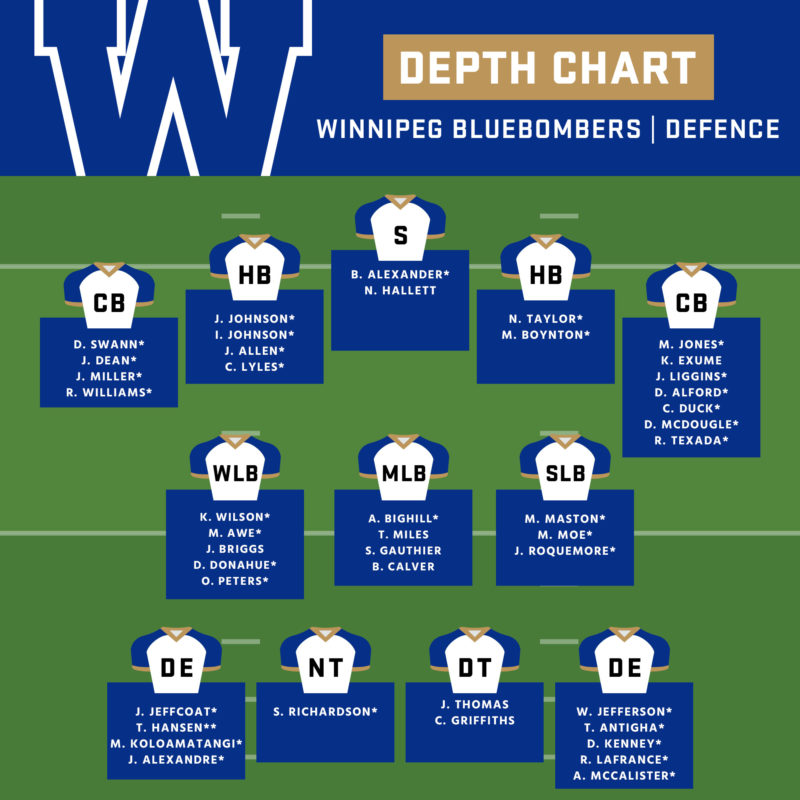 Among the Bombers’ off-season signings, none was bigger than reigning Most Outstanding Defensive Player Willie Jefferson, who the team was able to retain. The one-man wrecking crew will continue to be a terror off the edge.

Drake Nevis and Craig Roh both departed for Toronto, while Jonathan Kongbo signed with the San Fransisco 49ers, leaving the Bombers with less depth and without their starting nose tackle.

Steven Richardson is the most likely man to slide over to Nevis’ spot while veteran pass-rusher Jake Thomas becomes the starting defensive tackle. Jackson Jeffcoat will be the other edge rusher opposite Jefferson.

Tobi Antigha was brought in to help solidify the depth and global player Thiadric Hansen will be trying to improve on an impressive first campaign in the CFL.

Veteran Justin Medlock remains a shoo-in to be the team’s kicker and punter. There will be some competition in training camp when it comes to the returners. Charles Nelson served as the team’s primary return man during the 2019 season. However, he landed on the six-game injured list, which opened the door for Janarion Grant to succeed. He became the team’s go-to option for the remainder of the year. Lucky Whitehead has also proven to be a solid returner in the past and could be considered in the race for the slot in the lineup.

Bombers head coach Mike O’Shea has the luxury of retaining the majority of his contributors from the championship-winning squad, but general manager Kyle Walters has done a good job of bringing in more depth and making the competition higher heading into the regular season.