The stage was set, one of the Grey Cup’s ultimate underdog/redemption/going-out-on-top stories waiting to be written, when the trifecta of pain hit Henry Burris.

The Ottawa REDBLACKS’ quarterback was taking part in warmups ahead of the 104th Grey Cup. A stressful, but ultimately rewarding season had unfolded for Burris, who was ready to face his former team. He couldn’t have been more mentally ready for what was ahead of him. Then his knee offered up three thoughts.

Burris described it as a jolt, crunch and a pop. It could have been strikes one two and three on the night, pulling the pen from his hand before he could put a letter into what turned out to be the final chapter of his career.

“It was serious. It was one of those cartilage injuries. If anyone’s ever had one they know it,” Burris said from his home in Ottawa.

“Luckily enough for me they said it was at the last 10 per cent of extension of the leg. Whenever I would extend out fully — and for me that’s dropping back on my first step because you push off the left knee — fortunately for me because it was at the end, they could block off my brace that I wore to protect that knee.

“Then of course they shot it up with a needle and then gave me some torodol and and honestly I couldn’t feel anything. There were parts during the game where a couple of our guys hit me and I just said I don’t know what you’re talking about I can’t feel a thing anyway.” 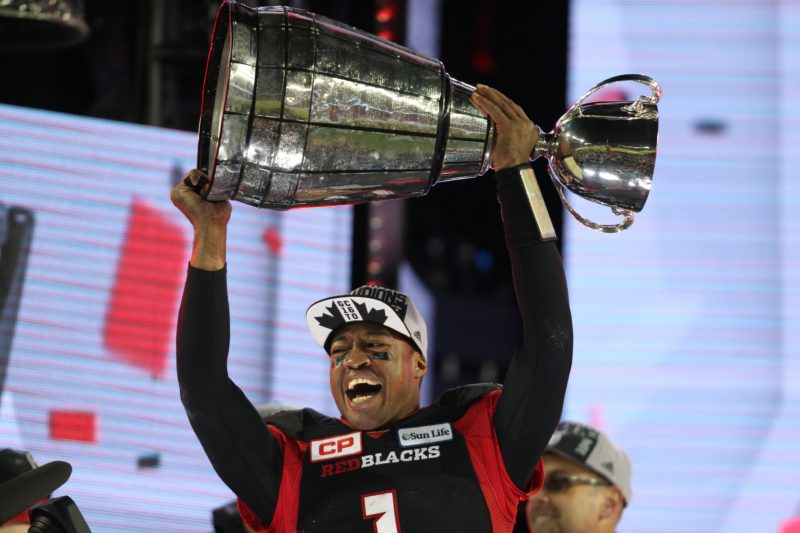 Henry Burris didn’t let a pre-game knee injury stop him from helping shape one of the most memorable Grey Cups ever (Geoff Robins/CFL.ca)

He credits the REDBLACKS head trainer and the team’s doctor for coming up with a plan that let him get back on the field. Burris knew that night in Toronto would be his last game. The stage was too big and the fire inside Burris burned too strong to not get on the field.

As part of its CFL Encore series, TSN will air the game tonight at 7 p.m. on TSN3.

We’re now up to 107 Grey Cups. The 2016 edition is (in this writer’s admittedly limited opinion) one of the best that’s been played. Despite the bad/numbed knee, Burris played the best game of his career. He made 35 of 46 passes for 461 yards, with three touchdowns and one interception. The REDBLACKS were enormous underdogs, having gone 8-9-1, facing a Calgary team that was 15-2-1. The teams tied in one regular-season meeting and Calgary triumphed in Ottawa in their regular-season visit there, but Burris felt like he was the X-factor in the equation.

“The only denominator missing was me. I wasn’t involved in either of those games,” he said.

“The last time I played Calgary in Ottawa (in 2015) we beat them and yeah, they beat us in Calgary but we beat them in Ottawa. So this was the first time I’d played them since then.

As he goes through the memories of that night, there’s a hint of the frustration that Burris felt that season. He’d won the league’s MOP award in 2015 but saw the REDBLACKS sign Trevor Harris as a backup that winter. Harris had played understudy to Ricky Ray in Toronto and shown he was ready to lead a team of his own. Burris was the present, but the future was there, pushing at him. It didn’t help that Burris broke his pinky finger in Week 1 of 2016 and that Harris played well filling in. When Burris returned, the wins didn’t come with him and he was benched before reclaiming the starting job late in the season.

The sports world is one that quickly forgets and when it comes to an aging athlete writes them off even faster. Burris knew that but when he realized he was living it, it grated on him. He snapped at the TSN panel during a game that season, telling his soon-to-be colleagues to “shove it.”

“I was pretty much at the point where I was fed up with the hoopla,” he said. “I dealt with this in Hamilton and now here I am going through it once again.

“For me, it was all about me going out there and just showing my passion through how I play and unfortunately for me, I broke my finger. I guess when I broke my finger that made me old,” he laughed. “That showed that I was old, hitting the face mask when you’re following through.

“The thing was, people would use small nuggets and turn them into a goldmine and use it against me but at the end of the day, I’m like, OK, you guys are sitting here talking like you have no idea who I am. I’m some guy who’s just trying to hang around. The only way I could do it was work hard. I did that in practice.

“I kept focus on the task at hand and made sure I didn’t do anything selfish and I made sure I focused on making myself better, compete all you can. Make yourself the best you can because when your time comes, it’s about you and the team doing what you’re supposed to do in this final season.”

TSN’s cameras captured the moment in overtime where the REDBLACKS sealed the Grey Cup win. From Ottawa’s sideline, there’s a brief look of disbelief on Burris’ face, that even he can’t believe it ended the way that it did.

“Rick Campbell, seeing him celebrate after that final play when (Calgary’s pass) falls incomplete, there’s no flags…to see the emotion that he let out,” he said.

“Here’s a guy who of course was always in the shadow of his dad, just wanting to make a name for himself and enjoy the ride and building a legacy of his own. Just to see him show the emotions that he did, knowing that he’s a steady Eddy, a guy who doesn’t show any emotions. To see him let it out and the tears and enjoyment, the laughter and joy, that really resonated upon the rest of us.”

It was perfect for Burris that his family and friends were there. His sons, Barron and Armond were old enough to appreciate what their father had just accomplished.

“Really, for me the No. 1 thing along with those two is definitely the city of Ottawa,” he said.

“Forty years of waiting. When I ran on the field after (the knee) injury…I really didn’t have an idea of what the crowd would be like. Seeing that it was pretty much a TD (Place) game, TD Place South, I called BMO Field that night.

“We were well-represented. Forty years of waiting anxiously for that first championship to come back home. To have a fan base like that, it’s something you can’t measure. It was immeasurable to have them on our side that night.”