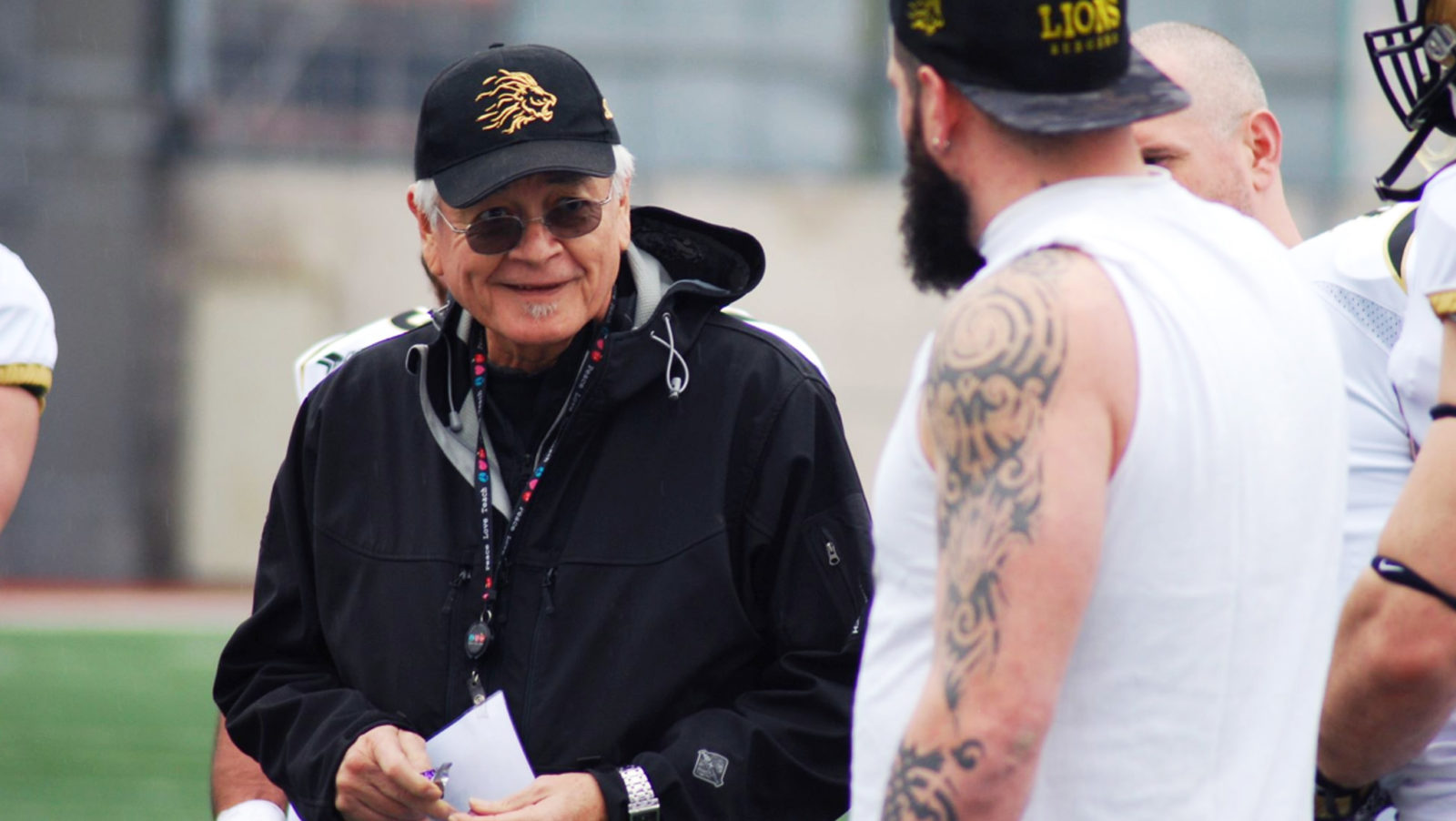 When six-time Grey Cup winner Adam Rita celebrated his 65th birthday seven years ago, he made good on a promise.

He retired from the CFL.

One of the most decorated coaches and general managers in league history, Rita had vowed that after a CFL career that spanned three decades he would pack it in. At least in North America.

“I became a coach, came to the CFL in 1983. It was in BC and I think I went from Vegas to Hawaii to the BC Lions. It was actually the first year they opened the new stadium. It was quite the scene there; it was packed. Fifty-thousand people there. It was crazy. And then I coached in the CFL for almost 30 years, I think. When I turned 65, I retired. That was a promise I made to myself, to retire from professional football and use my football skills to travel.” 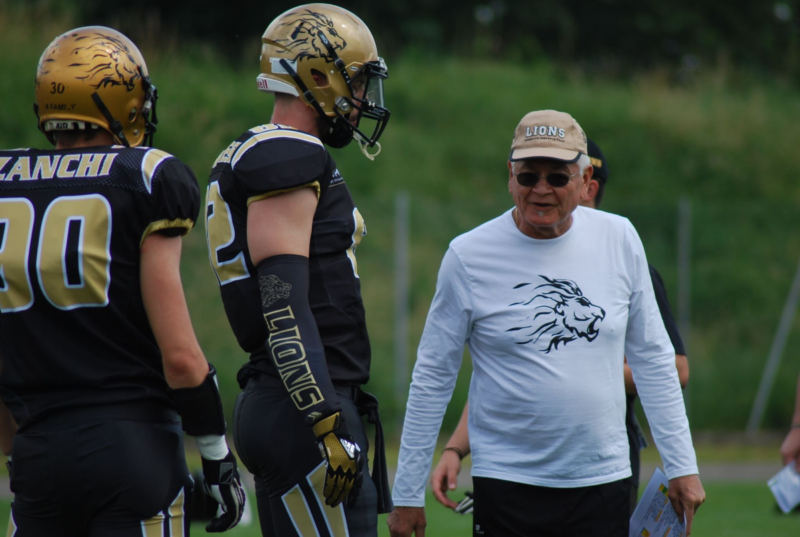 Adam Rita continued his coaching career in Europe after retiring from the CFL (Photo: Federico Lino)

Keep in mind that this is a man who coached the Toronto Argonauts to the 1991 Grey Cup title with Rocket Ismail and Matt Dunigan and was the offensive coordinator when the Argos with Doug Flutie behind center won the 1996 Grey Cup. He had started his career in Canada with the BC Lions helping the team reach the Grey Cup game in 1983.

So what has he been doing in his retirement?

This time though, in Europe.

He discovered a website, Europlayers.com, kind of like monster.com for football in Europe and found himself headed to Prague in the Czech Republic.

“My first job in Europe was Prague and I loved it! My wife is from Hungary, so going back to Europe was like going home for her. From Prague we were able to go back and forth from Hungary to visit her parents and family. It was great. The Prague Panthers were awesome, we had a lot of fun.”

Rita, who also played and coached at Boise State before embarking on his CFL journey was in for a surprise in Prague. There was a prolonged period of adjustment. He was suddenly dealing with a team playing in both the Czech league and in the Austrian league, one of the premier American football leagues in Europe. He also had to face the fact that his team was made up mostly of part timers. In other words, the Czech players had day jobs.

“From a professional coach to a European coach. It’s a huge step. The first year can be tough on you. These guys actually have a job! You know they practice three times a week and play on Saturdays. We played two schedules in the Austrian league and Czech leagues, so we’d play Saturday then come back and play Sunday. Which is unbelievable! I asked ‘why do you guys do that’ they said you know ‘we love football, coach. We love football’. Two games per week was different but we got it done.”

Another major difference was the lack of practice time available.

One of his key players that first season was Jan Dundacek, regarded as one of the top players, not only in his country by in all of Europe at the time. He was impressed by his new head coach.

“Adam was a guy with great knowledge and high spirit and enthusiasm which could be seen from first moment,” Dundacek said.

“And I always preferred coaches with more of a positive attitude that yelling types. It was a tough year, playing with an understaffed and undermanned team but he took us as far as we could go given the circumstances.”

Under Rita the Prague Panthers reached the Czech final in 2012 losing by a point in the final. They won three of seven games in the Austrian Football league. It was an educational start to his European coaching career. 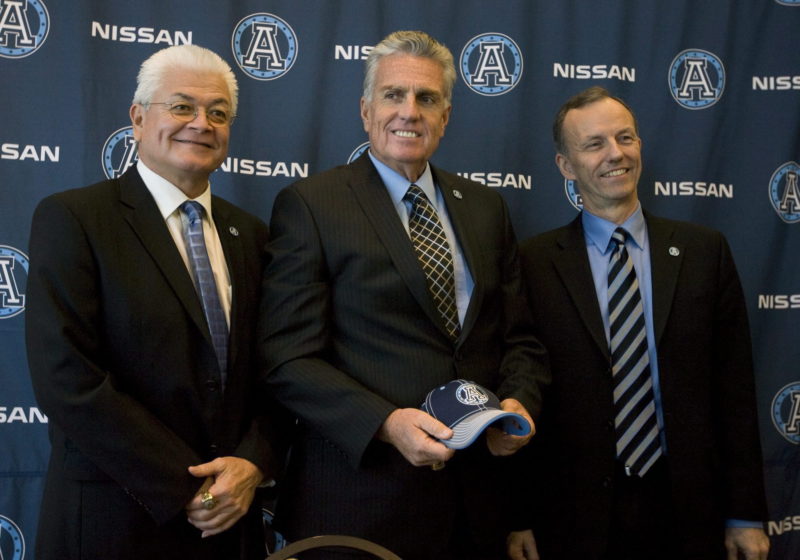 “I had one of the most versatile players I have ever coached that year in Jan Dundacek. He was an excellent athlete, could play any skill position, he was smart and has great football intelligence. He could also play quarterback and he was my X receiver, my best guy. Big time playmaker and could play at any level.”

After spending the following season in Canada with the Trinity College School football team in Port Hope, Ont., he went back to Europe in 2014, this time to Switzerland and the Calanda Broncos, based in the gorgeous mountain town of Chur, nestled deep in the Swiss Alps. Although the scenery was stunning, Rita spent just half the season there before returning to Canada.

“From Prague, I went to coach in Switzerland for the Calanda Broncos. Now there was a different experience. I enjoyed it and met some good people there. Then I took another year off from Europe to coach in Canada,” he said.

On arrival back in Canada, Rita decided to take another year away from being a head coach staying close to home, coaching with the Football North program at Clarkson Secondary School in Mississauga, Ont. In 2016, he headed to the place he had always wanted to coach.

“From there, I went to a team I always wanted to coach, the Bergamo Lions of Italy, because I had a lot of guys that I knew coached or played there,” he said.

One of those guys was another Grey Cup-winning coach, in Danny Maciocia, who had coached Bergamo in 1998 and 1999.

As with his other teams in Europe, Rita had to make some adjustments in his approach when he arrived in Italy.

“I think the biggest thing is the amount of time you have with your players. That was the biggest adjustment,” he said.

“You know when you are in the pros, even though you’re in the CFL, you’ll have 4.5 hours with them every day of the week. Whereas in Europe, you’re lucky to get three days in. That was the biggest adjustment. I also like to put in new players, so I had to kind of cut back there and be more high reps on a player and move on.”

“Personally, I wouldn’t pass this experience up for anything. It’s the best thing I’ve ever done. I’ve done a lot of great things in my life. In fact, I tell my wife I’m the luckiest guy in the world— I get to do what I love to do.”

One of the other adjustments all head coaches have to make in Europe is a small, at times extremely small, coaching staff. In Rita’s case, he found himself basically the lone coach on the staff so he had to rely heavily on his import players.

“Sometimes I had a full complement of coaches and on some teams I didn’t, it was just me and another guy,” Rita said.

“You had to use your Americans as coaches, which really didn’t bother me that much because when I coached in the CFL, my quarterback was my other coach. I made sure he knew everything in case anything happened to me during the game he could carry on without me. I kind of had that system in place already.”

In 2017, he took over a Bergamo team that had gone 1-9 the year before and had to qualify to play in the top division again. That season Rita got them to the playoffs for the first time in three years. In his second season, instead of using an import, he brought in a young Italian to play quarterback, Andrea Fimiani. Although the team — depleted of players due to budget constraints — did not do well, his quarterback flourished under Rita.

“In Italy, my quarterback in my second and third year was a local kid who I loved. He was my Italian version of Doug Flutie,” he said. “One of those guys who is super athletic and just loved the game. He loved the game and had athleticism which fit into what I wanted to do. We had a blast for two years together.”

Under Rita’s tutelage, Fimiani developed into a sought-after quarterback in Italy in a landscape where American quarterbacks are seen as essential.

Fimiani, who is now also one of the Italian national team quarterbacks, was full of praise for his coach.

“He is the first American coach I worked with, so of course his coaching method was a way different from what I was used to,” Fimiani said of Rita.

“The thing I appreciated the most about him is the ability to have productive practices even when you don’t have enough players at practice. That’s a pretty common thing in Europe. By saying that he has a crazy interest in every detail.

“I always say we probably had the worst team, but the best coach. The fact we were able to compete with other teams was an authentic coaching miracle.”

With his vast knowledge and experience, Rita’s impact was felt not only by the players but also by club management. Federico Lino was both team president and general manager.

“I played American football for many years before taking over the team and I have known many coaches,” Lino said. “In these three years, coach Rita — who I consider now a friend for life — has transmitted to me knowledge and tranquility. Infinite knowledge of the most beautiful game in the world and a tranquility to rise above all adversity.”

Although the final two seasons in Italy did not go as well as the first due to a variety of circumstances, the key one being finances, Rita is happy with the results.

“Personally, I wouldn’t pass this experience up for anything,” Rita said. “It’s the best thing I’ve ever done. I’ve done a lot of great things in my life. In fact, I tell my wife I’m the luckiest guy in the world — I get to do what I love to do.”