O’Leary: What we would have seen in Week 1 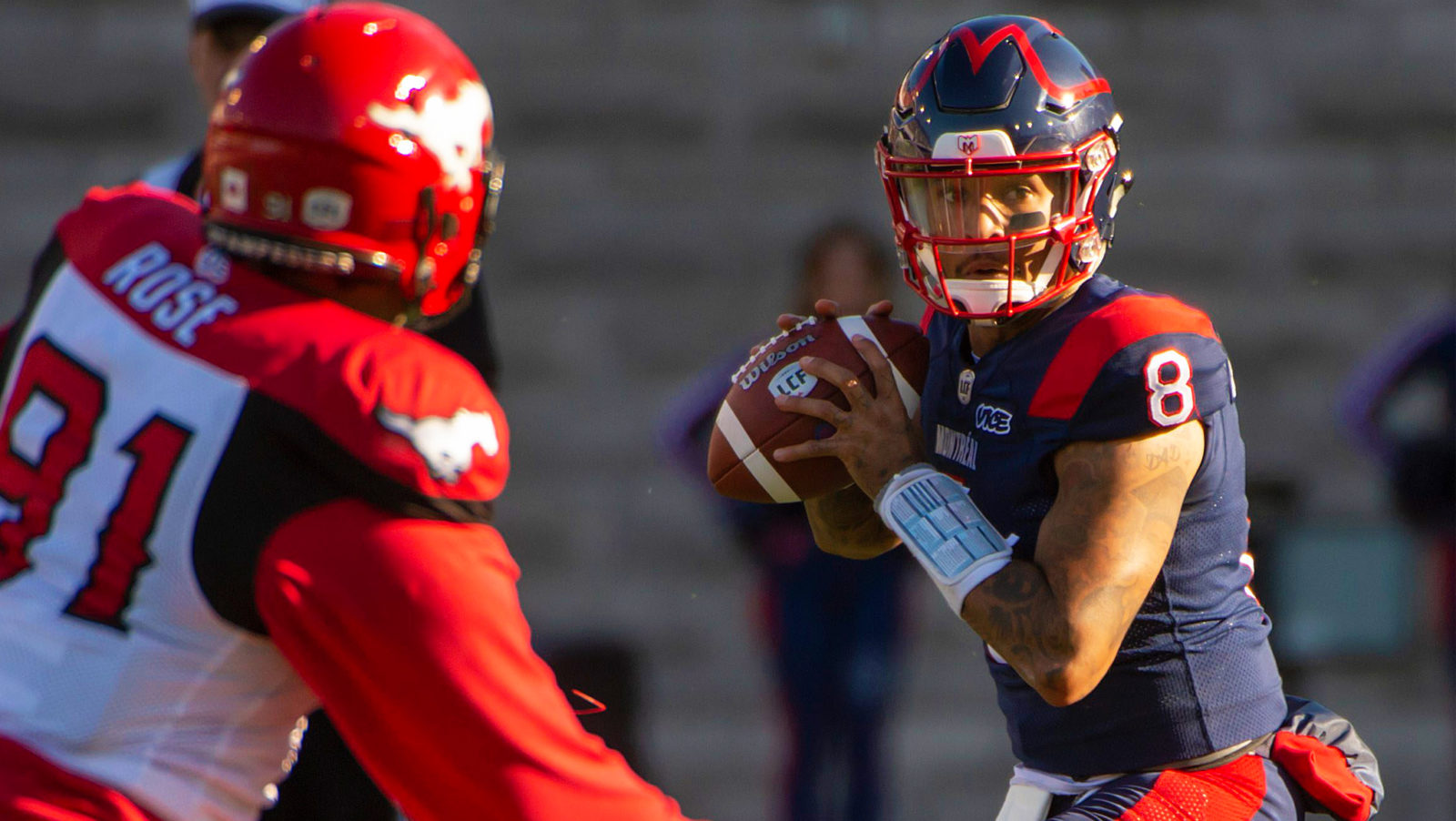 O’Leary: What we would have seen in Week 1

In normal times, things would of course be much different at this point in the year. We’d have just come through a month of training camps, pre-season games and roster cuts that would have given us a clear look at what each team in the league was going to throw at the 2020 season.

We’d have already gotten a glimpse of the league’s top players, some of them in new surroundings, others that are in familiar confines, adjusting to the new pieces around them. Many of us would have gone to pre-season games and spent time with friends and family there, getting reacquainted with stadiums and the food and drinks offered up (there’s something special about a burger or hot dog at a game, isn’t there?).

Thursday will mark what would have been Week 1 of the 2020 season and while we’re far from normalcy, I’ve been thinking about what we would have seen on the field. At some point earlier in this week, my first edition of weekly picks would have been due. That’s another thing I miss from our normal times. So, surrounded by the unknowns of what training camp and the pre-season would have brought us, I’ll venture into the picks waters, at least for this week. Just for funsies, as a grizzled sports writer I used to work with liked to say. 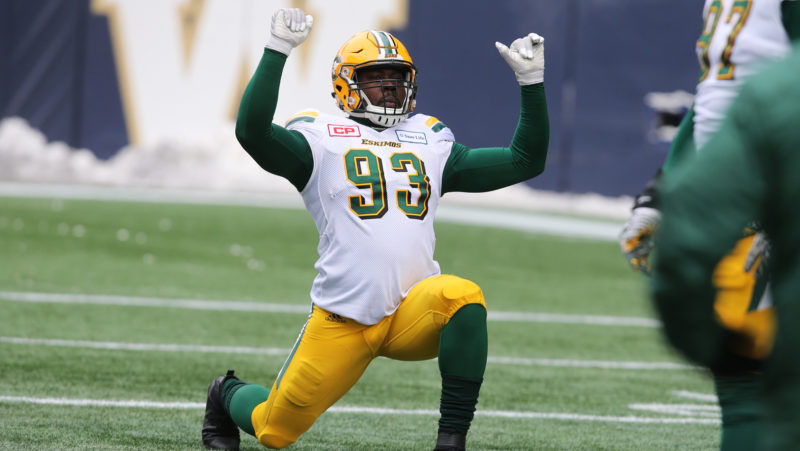 Canadian DE Kwaku Boateng leads an Edmonton d-line that seems to be getting better by the season (Jason Halstead/CFL.ca)

In Edmonton, the Esks would be hosting Mike Reilly and the BC Lions. Edmonton had BC’s number last year, handing a Lions team with plenty of tinges of green and gold three losses in all three of their meetings. None of those losses sat well with the Lions, who made significant changes over the winter. I’ll spare you the position-by-position breakdown from our depth charts and put a winter of off-season changes for both teams aside and bring it down to the trenches.

While both quarterbacks are MOP contenders with talented receivers sprinkled in around them, this imaginary match-up comes down to how well each one can be protected. Edmonton had one of the top offensive lines in the league last year, while the Lions clearly didn’t. Conversely, that Edmonton defensive line is scary and I think is only getting better going forward. In a normal Week 1, with everyone at 0-0, the Lions would have to prove that they could protect Mike Reilly. We know that Trevor Harris can be protected. I’d take the Esks to win at home.

Next, there’d be an intriguing game in Ottawa, where the REDBLACKS welcomed the Argos. Both teams missed the playoffs last year and change ran through both organizations over the winter. We have two new head coaches, with Ryan Dinwiddie in Toronto and Paul LaPolice in Ottawa. Matt Nichols comes in at QB for the Argos and Nick Arbuckle made the move from Calgary to Ottawa to get his shot at being a starter.

Those four moves will have big impacts on their respective seasons and Toronto and Ottawa stand opposite of each other in the routes they’ve taken. In Toronto, you have an experienced QB in Nichols, paired with a rookie head coach in Dinwiddie. LaPolice has a long coaching resume and coming off of a Grey Cup win with Winnipeg last year is heading into his second stint as a CFL head coach. Arbuckle showed promise filling in last year for Bo Levi Mitchell in Calgary but will be in his first year as a full-time starter. So in the earliest stage of the season, experience should make more of a difference. Does that favour the coaches, or the quarterbacks? In Week 1, I say the QB. I’d take Toronto.

Our third game is one that heavily favours the home team. Montreal has only won in Calgary twice since 2009 and one of those victories is the Alouettes’ win over Saskatchewan in the infamous 13th man Grey Cup. Their other win came last August in a 2OT thriller.

The Stamps are very tough at home, going 72-18 at McMahon Stadium since 2010. Their worst at-home record came in 2011, when they went 5-4. While the Als shocked a lot of teams in their 10-win campaign last year, their opponents will be ready for anything with them this time around. This has the makings of a highly entertaining game and if you look at it objectively, the Stamps winning at home would seem like the safe choice. But sometimes fictitious football picks, like life, are about taking risks. Also, have you followed my picking pattern over the last year? I’m going with the Als in Calgary for the second consecutive year and if they pulled it off, trust me when I say that I would be a poor, smug winner, rubbing this selection in the face of everyone that doubted me on Twitter. 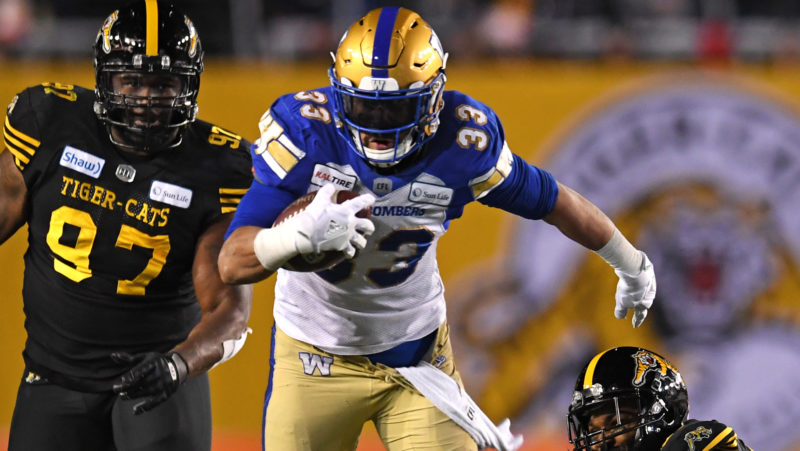 Andrew Harris was a monster in the Grey Cup last year, picking up MVP and Most Outstanding Canadian honours (Candice Ward/CFL.ca)

Finally, on Saturday we’d have a Grey Cup rematch with a twist. The defending champion Winnipeg Blue Bombers would be in Hamilton, marking a rare situation where the champs don’t open their season at home. Let’s assume that the Bombers would get their rings in Winnipeg at some point in the week leading up to this game. They’d board a flight to Hamilton reliving the high of their historic win. And then I think they’d arrive in Tiger Town and lose their season-opener. As I said in my previous pick, life is about taking risks. But it’s also about not taking too many. The Ticats went undefeated at home last year, including their demolition of Edmonton in the East Final. I can’t be picking multiple at-home juggernauts to fall in the same week. That would just be reckless.