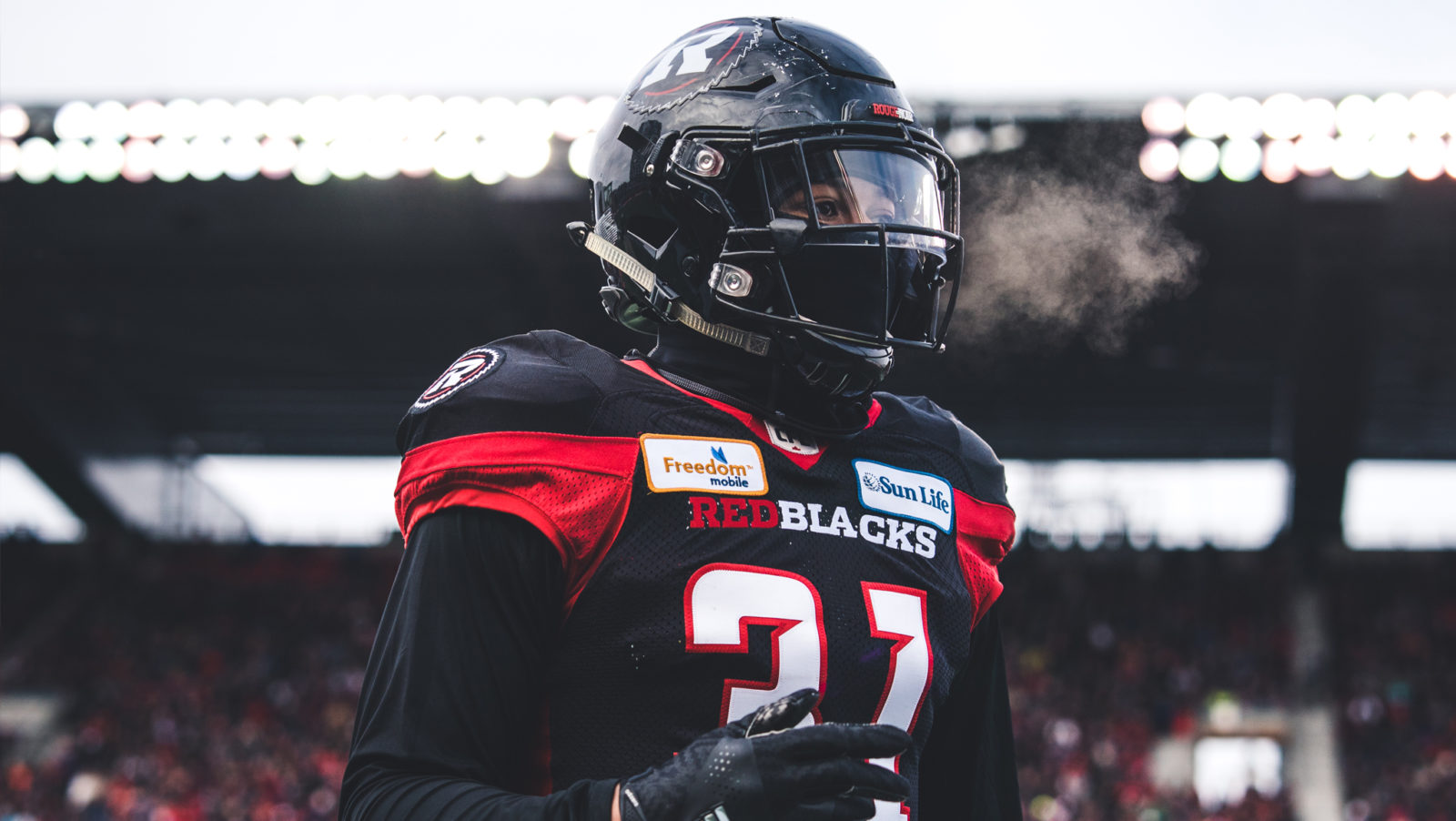 OTTAWA — At 12 years old, Kevin Brown had decided that he was done with the game of football after suffering an injury.

“It was crazy. We were having a cookout, and my aunts, my dad and my mom all ganged up on me and were like, ‘So what are you gonna do? How are you gonna get college paid for?'” Brown said to OttawaREDBLACKS.com. “I said I was just going to do an academic scholarship and they said I should just play football.

“I remember my aunt called me soft, and it was over after that. It just felt like they were poking and prodding me to keep pursuing something other than academics.”

From the University of Cincinnati to the pro ranks, Brown has turned a passion he picked up later in life into a career, becoming one of the top defensive players on the Ottawa REDBLACKS.

RELATED
» Steinberg’s MMQB: Making the best of a difficult situation
» Sutton: Questioning the future of injustice
» Ferguson: The art of throwing to the sticks 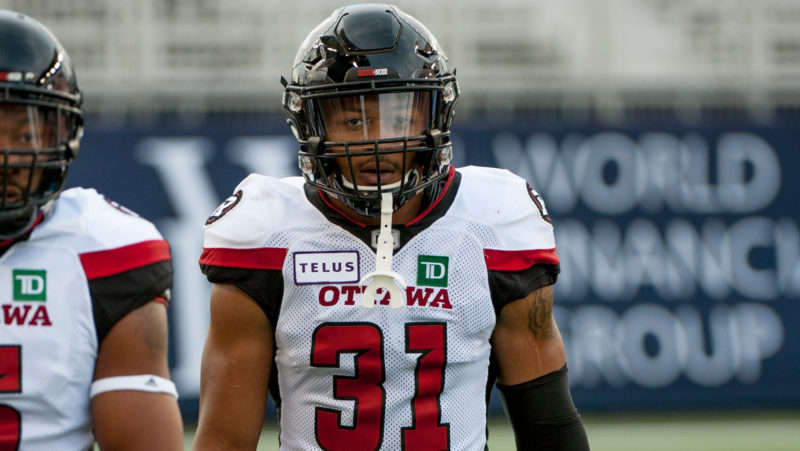 The 26-year-old played defensive back coming up as a kid, after taking a break from the game, he returned to play in his junior year of high school.

He was thrown right into the recruiting process and had a learning curve when it came to picking up schemes on defence.

“I feel like the most natural part was running and hitting. The good thing about it is that’s the base of football,” Brown said. “The x’s and o’s in high school football aren’t too complicated, but I just remember my first day, the defensive coordinator and explained cover 2 to me and I didn’t understand it at all.

“… I just remember the terminology and he could tell that my head was spinning, so he just said, ‘Don’t let anybody beat you deep.’ And I said, ‘OK, I can handle that.'”

Brown had played in high school with Tre Roberson, who was a four-star recruit at quarterback at the time. He was able to go to the Indiana commit to get some pointers on how to go about the recruiting process.

From there, Brown attended some junior camps and started to catch the attention of some programs. He said that Western Michigan was the first team to offer him a scholarship, then the other teams in their conference followed suit.

He had offers from Wisconsin, Indiana and Cincinnati on the table, and he decided to join the Bearcats, as they had everything he was looking for in a school.

“The main things I was looking at was if they had the major I wanted, did they have nice jerseys and did they play in a big stadium. Cincinnati checked all of those boxes,” Brown said. “I didn’t want to stay home but it was close to home. It was only an hour and 45 minutes away. I wasn’t too far away so my family could come watch me play.”

Cincinnati was also one of the lone schools that recruited Brown to play his natural position at safety. Many looked at him as a player that could occupy the WILL or SAM linebacker positions for their respective squads.

He had played defensive back during his freshman year, but a new head coach came in ahead of his sophomore campaign and made the decision to switch him to nickelback — a defensive back- linebacker hybrid spot.

“I almost took it as disrespect. I was going to transfer,” Brown said. “Because I was like, ‘He’s going to disrespect me. I’m athletic enough, I was a true freshman and I was on the field.’ But he told me that the way the game was going, I would be a good linebacker.”

Going into his senior year, Brown was a backup, but after the player ahead of him was kicked off the team, he was moved into a starting role. He was at WILL linebacker at the time, but he was shifted in to play MIKE linebacker.

Throughout his time in football, Brown had made an appearance at every position except defensive end and tackle.

Following his college career, Brown was once again ready to leave the game behind. He was set on getting a job and starting his life away from the game, however, a chat with his dad changed things.

“If I was a bum and he thought I couldn’t play (professionally), he’d be the first to tell me,” Brown said. “He said that he would have no problem telling me that and I believe him because he keeps it 100 percent with me. So I know when he was telling me I could still play, that unconfident guy got a little bit more confidence — just enough to start training again.”

Brown had his eyes on the CFL from the start, because he wanted to get more tape at linebacker.

He was able to get a workout with the Toronto Argonauts and was signed ahead of their first game of the 2016 season. But he was released following that game. Despite that, he was on the radar now and the REDBLACKS scooped him up after that.

He spent some time on the practice roster, something he described as terrible but

In his first full CFL season, Brown finished with 15 tackles, 11 special teams tackles and a sack in 11 contests.

A year later, the extended opportunities led to a career-best campaign, where he had 55 tackles, 17 special teams tackles, two sacks and an interception in 16 games.

The REDBLACKS were able to make it to the 106th Grey Cup presented by Shaw but came up just short against Calgary. Despite the defeat, it gave something for Brown to strive for in the future.

“It was just like, ‘Man, you can get to the pinnacle of CFL football, which is the Grey Cup. That’s the whole reason we play the game is to get to the end and we had a chance to win it,'” Brown said. “Just being in that environment, it was almost like a drug. It was like I need more, I need more of that.

EPISODE OVERVIEW: Nate Behar joins Donnvan Bennett and Brodie Lawson to discuss the powerful essay on race he wrote for Medium, a self described “stream-of-consciousness” turned to “paper”. Then, former CFL player turned activist Orlando Bowen joins the show to share his own personal story of injustice turned to activism.

Brown signed an extension with the REDBLACKS this off-season and is ready to get back to work with his teammates.

With a new coaching staff in place — including defensive coordinator Mike Benevides — Brown and the Ottawa defence will look to turn around their fortunes after a tough 2019 that saw them go 3-15.

Brown has always kept life after football in the back of his mind. During the off-season, he’s been looking at houses to try and gain some more assets. He also has a Rottweiler puppy that’s keeping him busy in the meantime.

From a player that was nearly out of the game entirely, Brown has created a foothold for himself north of the border and is now looking to prove that he’s among the league’s elite at the linebacker position.

“That’s my goal; to be the best that I can be. Because the people who came before me and didn’t get the chance to play professionally and live out their dream, I don’t take that for granted at all. I don’t take that lightly. I’m coming at everybody every single game and I’m trying to be the best. I’m trying to make as many plays as I can and turn as many heads as I can.”