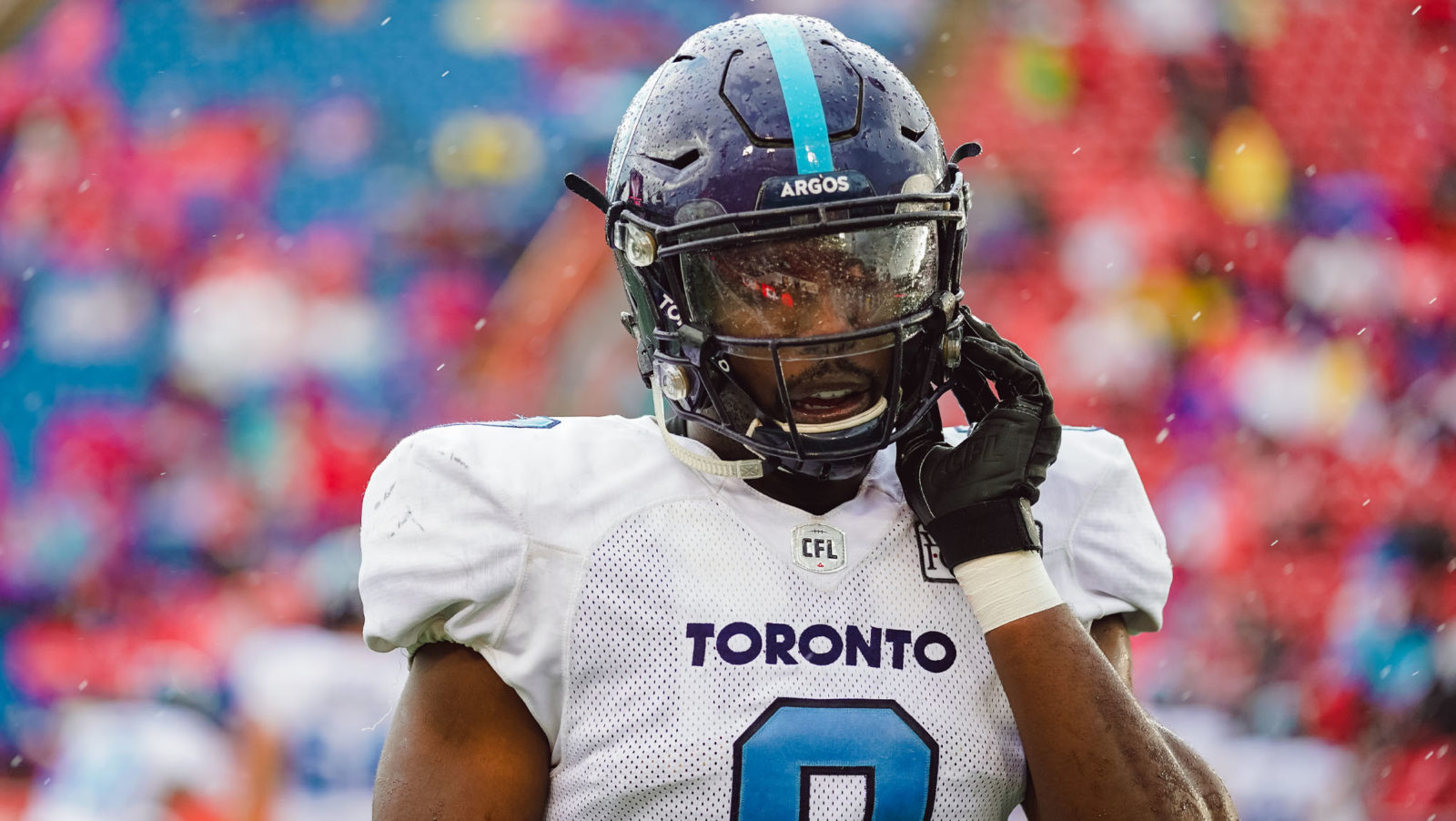 Tobi Antigha can chuckle about the details now because, in hindsight, the story of his arrival to the Canadian Football League and how he has made it to the Winnipeg Blue Bombers is more than just a little bizarre.

It begins with a workout 3 ½ years ago with Bombers’ assistant GM Danny McManus, then two free-agent camps with the Saskatchewan Roughriders wrapped around another look-see from Winnipeg, all before showing up for his first training camp in Saskatoon with the Riders lining up at a position he had but just three games of playing experience at… in high school.

And, yes, that’s a lot of detail in one paragraph to unwrap.

Put it this way; when Antigha was asked about his first introduction to the CFL, the 27-year-old linebacker began with:

We do, actually, and to set this up properly, let’s rewind to the winter of 2016-17 when Antigha, a receiver from the Presbyterian College Blue Hose, had first caught the eye of McManus. The Bombers’ scout worked out Antigha in November of 2016 and didn’t initialy offer a contract, but provided a ‘we’re intrigued; stay in touch’ answer.

While waiting to hear back, Antigha was invited to a Roughriders free-agent camp in Orlando in December. And it’s here where we’ll let the Tampa product step in to offer up some of the details. 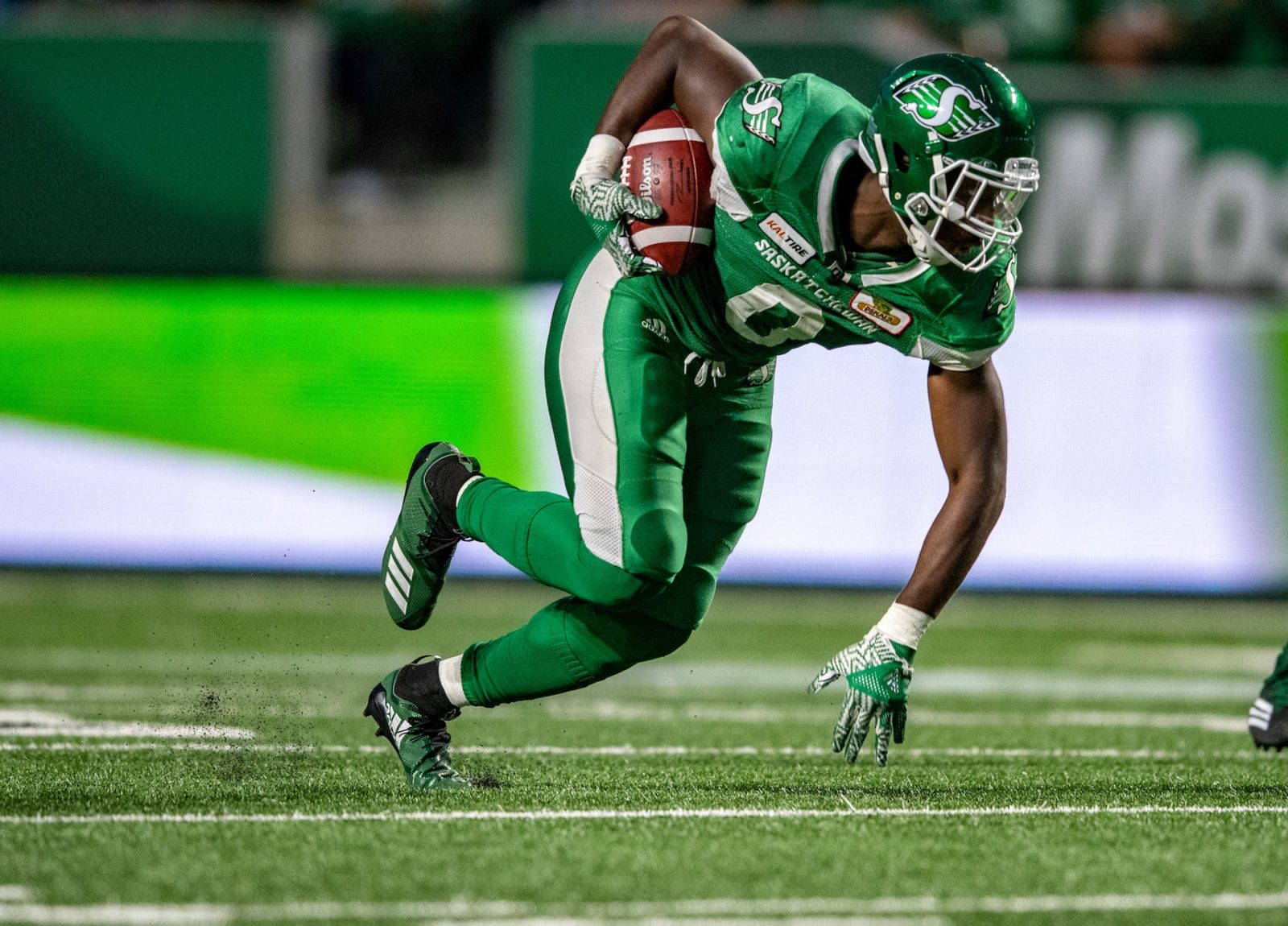 “So, I worked out at receiver and towards the end of the workout Chris Jones (then the Riders GM and head coach) had two offensive linemen he wanted to evaluate but he didn’t have any defensive linemen to work against them,” said Antigha. “He then asked all the skill players to line up and try their best pass rush moves to see if they can beat these O-lineman off the edge. He lined us up and I was one of the only guys doing anything with some success or even just trying to keep going. There were guys shying away from competing and I was one of the only ones to keep getting up and keep going.

“After the workout Chris Jones came up to me and said, ‘I’m probably not going to sign you as a receiver. But if you put on weight I’ll take another look at you at defensive end when I come back down to Tampa.’ A month later he came back to Tampa, I put on the weight and had another good workout. That’s when he invited me to mini-camp and the rest is history.”

After the second Riders camp and the instructions to put on weight – which Antigha obliged by bulking up 25 pounds – he had a call back from the Bombers… to play receiver. So, he dropped the 25 pounds showed well at camp, but the Bombers opted instead at the time to ink T.J. Thorpe, who played six games for the club in 2017.

The Riders subsequently made a contract offer to Antigha, who again bulked up for main training camp.

There’s not only the physical toll of all that weight gain and loss, but a mental aspect at play as well. 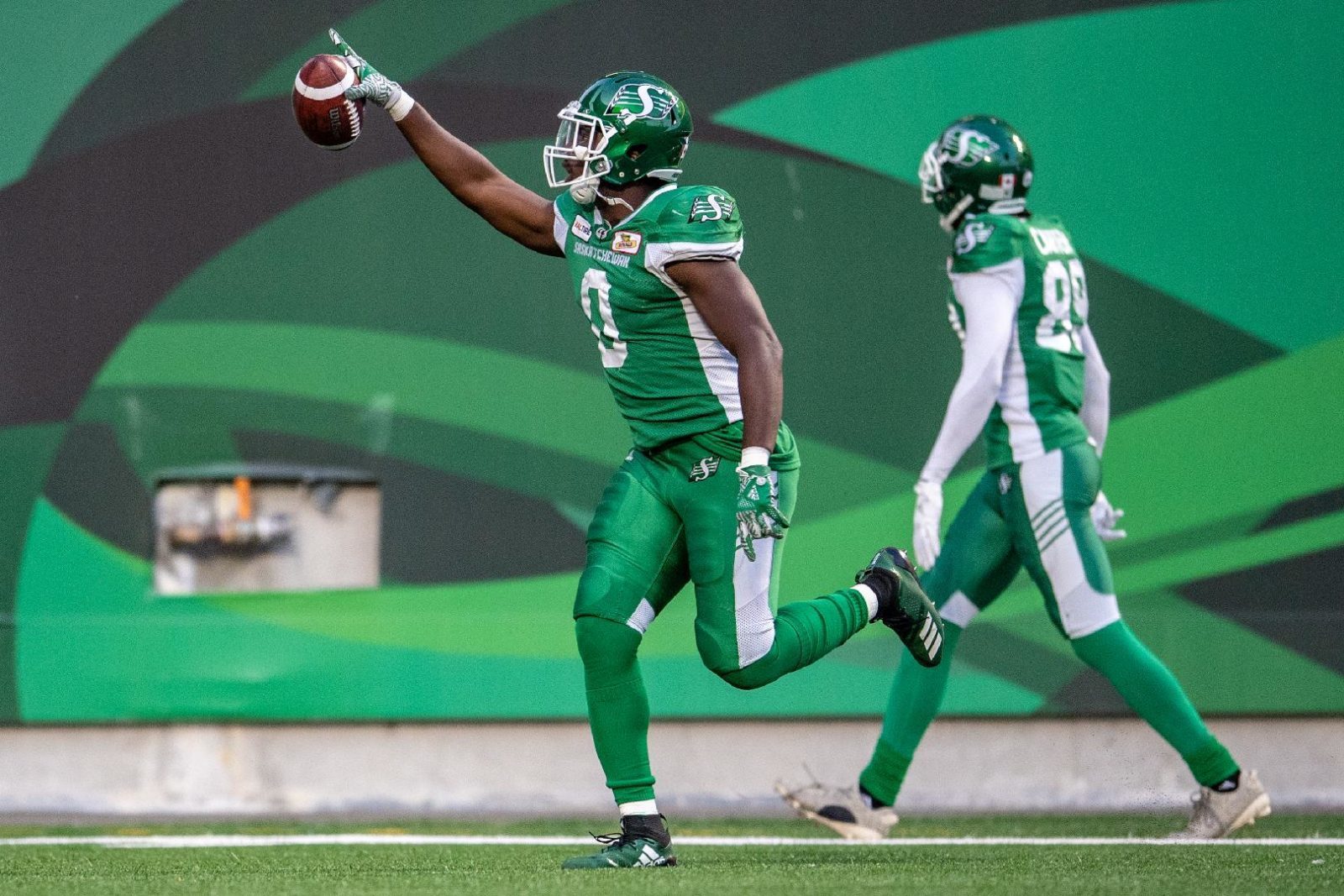 “When Chris Jones first asked me to play defensive end I took it as disrespect,” he said. “I was thinking, ‘What do you mean you won’t sign me at receiver? I was doing well out here.’ Then when I got to training camp I realized why he said that. I looked at the roster and we had Naaman Roosevelt, Bakari Grant, Chad Owens, Duron Carter, Rob Bagg and it would have been tough for me to come in as a rookie and hold down a spot. It had nothing to do with me, personally, it was about what the team needed for that season or in that moment.

“Everything about that transition to defence was difficult. Now you have to understand I’m going into training camp when jobs are on the line. The grind of training camp is so different and now I’m competing for a job with guys who have been playing defensive end for their entire lives. Some of them have played in the NFL, some of them are decorated defensive ends and now I have to compete with them just to get a job.

“The crazy thing is, I had to learn everything each day about how to play the position. That was very challenging being thrown into the fire like that, but it worked out and I’ve been fortunate and blessed to still be able to play.”

Antigha has seen most of his work in his three years in the CFL – two with Saskatchewan, last year in Toronto – at defensive end. But he’s versatile enough to drop back to play linebacker and he hopes to get a shot at the weak-side spot so capably manned last year by Kyrie Wilson.

He had options in free agency, although he kept hearing from prospective teams that they were unsure about where to line him up on defence. Every team, that is, but the Bombers.

“Winnipeg was the only team that told my agent, ‘We know what we’re going to do with him, we know how we’re going to use him and play him,’” Antigha said. “It just seemed like a natural fit on top of everything I already knew about Winnipeg and how strong the team is coming back with so many returning starters on offence and on defence they still have Willie (Jefferson), Adam Bighill and a solid defence.

“But the biggest thing was Richie Hall. I’ve done my research on Richie Hall and his success and track record in the CFL. He’s been using his players’ best attributes for years. I wanted to sign somewhere where I was going to be used the same way Jones did with me in Saskatchewan.” 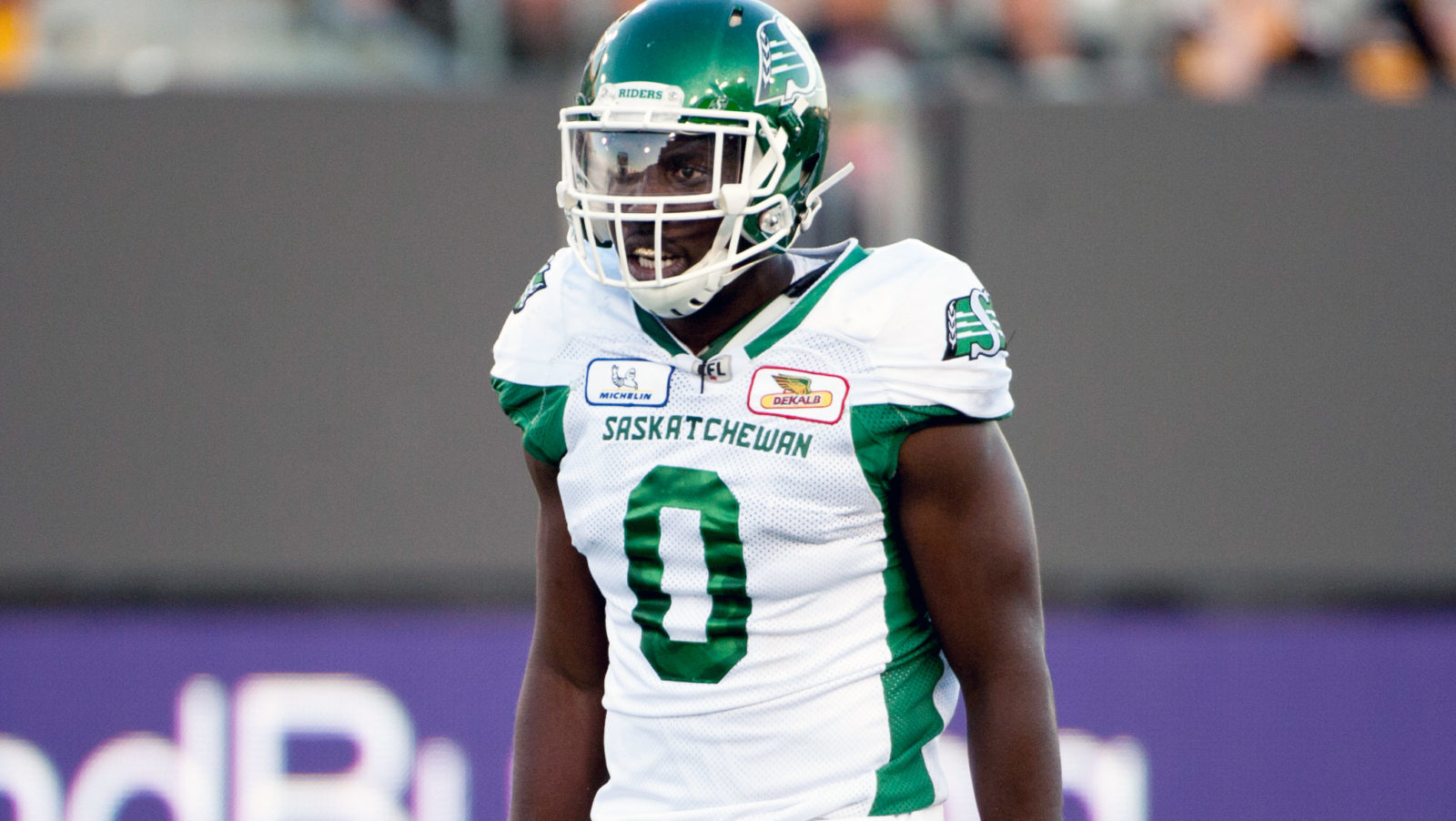 The third son of Nigerian immigrants, Antigha has never lost sight of the importance of hard work in chasing a dream. A political science major, he’s also got a good perspective on football’s place in his life and in the big picture.

Consider that in the two years after school and before his first CFL camp, Antigha worked out with NFL prospects to stay in shape while working side gigs as a custodian and sweeping tennis courts.

“Looking back, going into those workouts with Winnipeg and Saskatchewan I remember thinking, ‘This may be my only shot. I have to do something,’” Antigha recalled. “In the first Riders mini-camp I had a heel contusion that I got on the second day that limited me from doing everything I wanted to do athletically.

“I would be up two hours before everybody just to get breakfast and get on the field before everybody so I could warm up and get my heel to the point where it wasn’t a noticeable impairment. I did that for three straight days.

“You’ve got to put it out of your mind and understand this is an opportunity of a lifetime and you’ve got to get the job done. Now I’m fortunate. I get to play the game I love.”