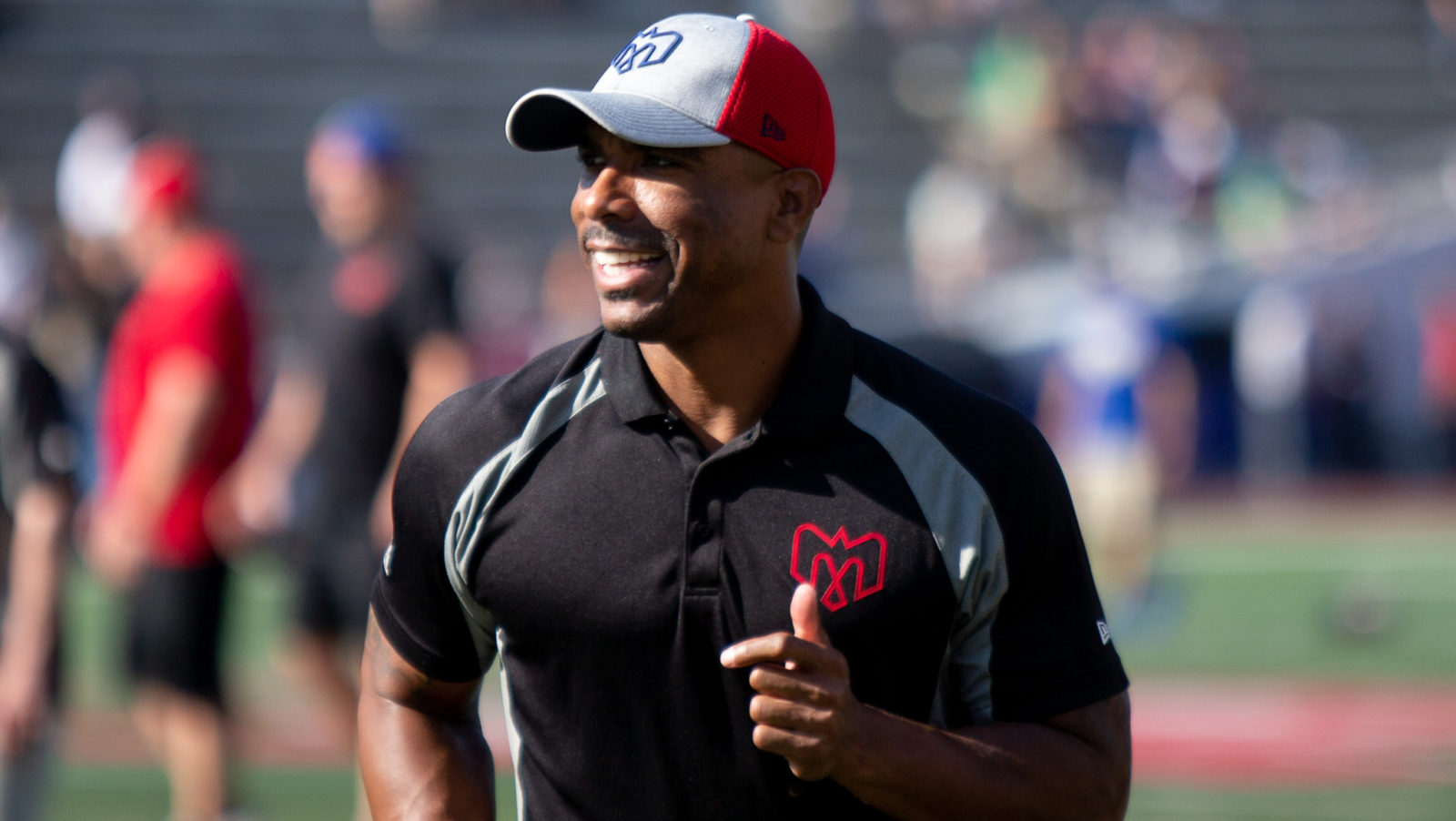 Marquay McDaniel is no stranger to the city of Calgary and the Stampeders’ organization.

Following six seasons donning the Red and White, the longtime receiver will be returning to the Stamps, but in a different capacity than fans are accustomed to seeing him. He’ll be joining Dave Dickenson’s staff as the team’s receivers coach for the 2020 season.

“There’s definitely some familiarity. I’m familiar with the coaches and some of the players were here when I played,” McDaniel said on Monday. “Being familiar with how things are run and knowing the system was a big thing.

“And Calgary has always felt like a second home to me. Anytime I come back to Calgary, it’s always good.”

The 36-year-old joined Calgary in 2012 following three seasons with the Hamilton Tiger-Cats to open his CFL career.

He had arguably his best years in the league while with the Stamps, earning West Division and CFL All-Star honours in 2013 while capturing his first Grey Cup in 2014.

Following the 2017 season, McDaniel started looking into his options after football, as he quietly announced his retirement to take a receivers coach position with McMaster University. However, he did end up signing with the Hamilton Tiger-Cats — whom he started his CFL career with — to take runs with them on their practice roster.

That didn’t last long, as the Tabbies ultimately brought him in for full-time duty. He played in four games during his final pro season.

It didn’t take long for the CFL to come calling. The Montreal Alouettes added McDaniel to their coaching staff, as he served under Khari Jones as an offensive assistant.

“I think it was definitely easier being a player and of course the hours are different. But for me, I’m just looking at the big picture now,” McDaniel said. “When I was a player, I understood defences and everything, but as a coach, you have to figure out how you want to attack. So for me, I’m still learning a lot.

“Being in Montreal last year and being around those coaches, I always tell people that playing was kind of like checkers. How do you make a move to make the defender move? As a coach, it’s like chess. You’ve got to see what the defence is doing and then make a move or counter them. So I think as a coach, you have to think bigger picture to figure out how you want to attack.”

Now that he has a year of pro coaching experience under his belt, McDaniel returns to the place he called home for six years to help to try and develop the next wave of up-and-coming receivers on the Stamps.

One individual that is extremely thrilled to have McDaniel back in-house in Stampeders star quarterback Bo Levi Mitchell. Mitchell was with the organization during McDaniel’s entire tenure in Calgary and knows exactly what he can bring to the table.

“That might be one of the things I’m most looking forward to,” Mitchell said of McDaniel joining the fold. “I think he’s a guy that can really get the potential out of the receiver. The understanding he has of run concepts, defensive coverages and where a quarterback wants you to be at a certain time.

“He was one of the best with understanding that and Eric Rogers probably rivals that as well. He just understands where to be at the right time and how to get there. So to take that and pulling the potential out, I’m really excited about that.”

Veteran Eric Rogers will remain a focal point of the passing game, and Kamar Jorden will be ready to play full-time following a return from a gruesome injury suffered in 2018. They will be the main targets for Mitchell.

However, the Stamps also have a stable of young receivers coming through the ranks. Their depth was tested throughout the 2019 season and they answered the bell every time.

Hergy Mayala was one of the brightest stars for Calgary last year. The eighth overall pick in the 2019 CFL Draft put up some big games in his rookie campaign and continued to build chemistry with every passing game that Mitchell played under centre. He became one of the team’s go-to options down the stretch. 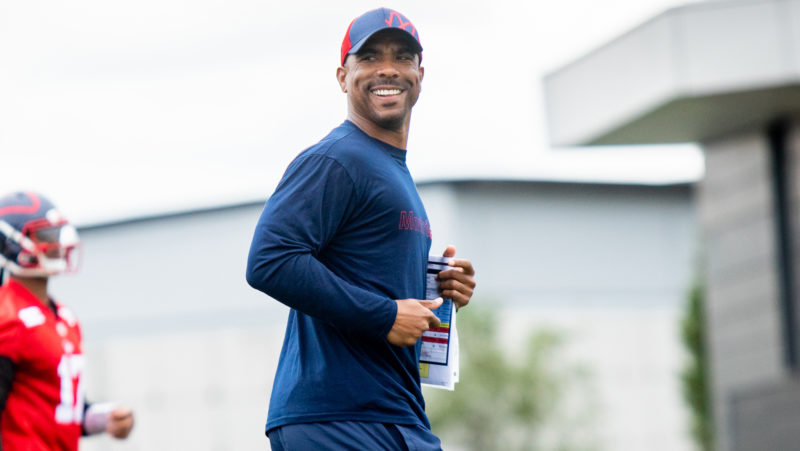 Marquay McDaniel is returning to Calgary as the new receivers coach of the Stampeders following six years with the franchise as a player. (Dominick Gravel/Montreal Alouettes)

“That’s one thing about Calgary. It seems like when someone leaves, someone else just comes in and fills that spot,” McDaniel said of the organization’s depth. “Talent is just always going to be here so that’s what I hope. There’s also guys who didn’t play much last year but gained some experience.

“That’s the thing about football. The more experienced guys could get injured. So you just have to have guys that are ready to plug in and know the system. Being in the system for a year or two, I think that Markeith Ambles and Aaron Peck-type guys. If anything happened to the veterans, those guys will be ready to step right in.”

To add to the fold, the Stampeders also grabbed a pair of receivers in the 2020 CFL Draft. With the 12th overall pick they acquired from the BC Lions, they selected Trivel Pinto from UBC. They followed that up by taking Simon Fraser’s Rysen John with 21st overall pick.

“Pinto reminds me of a Hergy-type of receiver but with more speed. So watching his college film, you could just see that he can do a lot of things,” McDaniel said. “He can get down the field vertically, but he’s also a smart kid who can run routes and beat defences, and you can see that show up on film. Rysen is a big 6-foot-7 receiver who can go up and get the ball. I saw him on tape catch a ball with four people on him. His strength is being able to go up and get it.

“The thing with receivers is teaching them the game, which might be a little different from college. But also working on things they might not be great at. We just want to work with guys in certain areas, which is what I’m hoping I get the chance to do.”

With those two picks,  Calgary managed to land two of the top receivers available heading into the draft.

It’s not a stretch to say that the Stampeders could return to being one of the most dangerous passing offences in the league, and McDaniel will play a big role in that. With Mitchell leading the way on the field, he’ll be able to help shape the young weapons to become key cogs in Dave Dickenson’s well-oiled machine on offence.