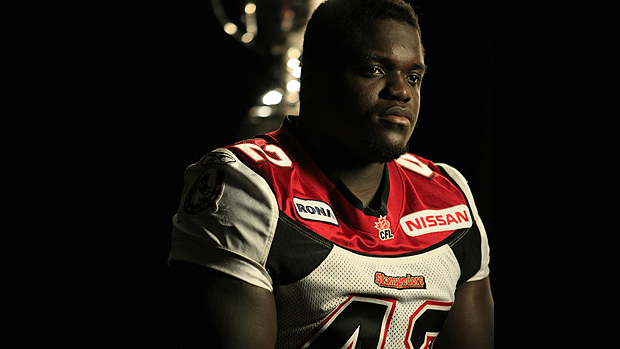 The BC Lions probably should have won the 2008 West Final.

For those that don’t remember, the Lions had two key chances to get to the end zone in that game and Mike Labinjo didn’t let it happen. BC trailed 12-9 in the third quarter and after a Korey Banks interception, got the ball to Calgary’s one-yard line. Labinjo forced a fumble and the Stamps survived the drive. With 4:59 left in the game and the Stamps leading 22-18, the Lions were making a push upfield when Labinjo struck again. Literally. The big d-lineman sacked Buck Pierce for a loss of 12 yards for a second-and-long that the Lions couldn’t convert. Drive over, lead preserved.

All they had to do in those moments was get past Labinjo. It didn’t happen.

“He wasn’t just somebody that was playing his role,” Geroy Simon said of Labinjo in September, 2018, shortly after Labinjo’s death. “He was somebody you had to be aware of and it’s something that stands out in my mind. 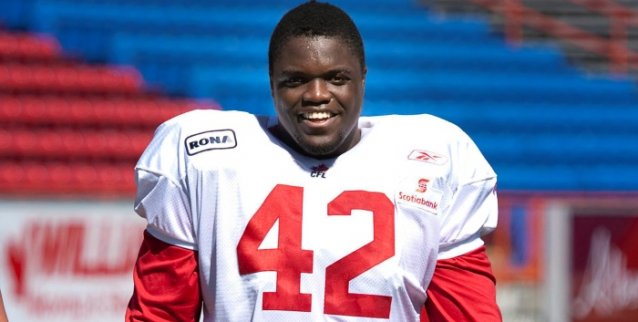 Everyone knows that the playoffs are what a season comes down to, but there are a select amount of players in any sport that are able to step up and make plays to impact those big stage games. Making the play that seals a game matters in Week 8 of the regular-season, but when it’s mid or late November and everyone on the field knows that only one team has a tomorrow, it’s different. It’s tougher.

On Friday night, fans will get to see Labinjo make those plays in TSN’s CFL Encore double-header, in the 11:30 p.m. ET game. Labinjo had six tackles, three sacks and the forced fumble in the Stamps’ win. A week later, the Stamps went to Montreal to face the hometown Alouettes in the Grey Cup. Labinjo had two tackles, a sack and three knockdowns, helping the Stamps to their first championship in seven years.

In the wake of Labinjo’s death, I spoke with some of the people who were in or involved with that Stamps’ playoff run. Chris Jones was the Stamps’ defensive coordinator at the time. Simon of course, was with the Lions. Anthony Calvillo was the face of the Als and the league at that time, to a larger extent. Mark Stephen called the games on the radio. All of them said that Labinjo was simply a force in the playoffs.

“He was a really happy-go-lucky guy,” Jones said back then. “He wasn’t always the best practice player but he certainly showed up on game day and did some good things. He was always a fun guy to be around.”

After Labinjo’s death, David Grossman took a long look at how Labinjo’s career developed. A well-rounded person who seemed to be good at everything he did, sports and otherwise, he came out of Toronto as a St. Mike’s product that played at Michigan State then briefly in the NFL before landing with the Stamps.

In May, news broke that Labinjo’s death had been ruled suspicious, after rings from his time with the Philadelphia Eagles and the Stamps were among items from his home that went missing. His family is asking for the public’s help in getting answers on what happened to him.

Labinjo was a good person that was exceedingly good at football. On Friday, we’ll get a chance to remember him through his contributions on the field. We’ll hope for more answers in what happened to him, while remembering his place on a special team that embodied Labinjo’s determination and resilience.