Cooper seizing opportunity to be go-to guy for Esks 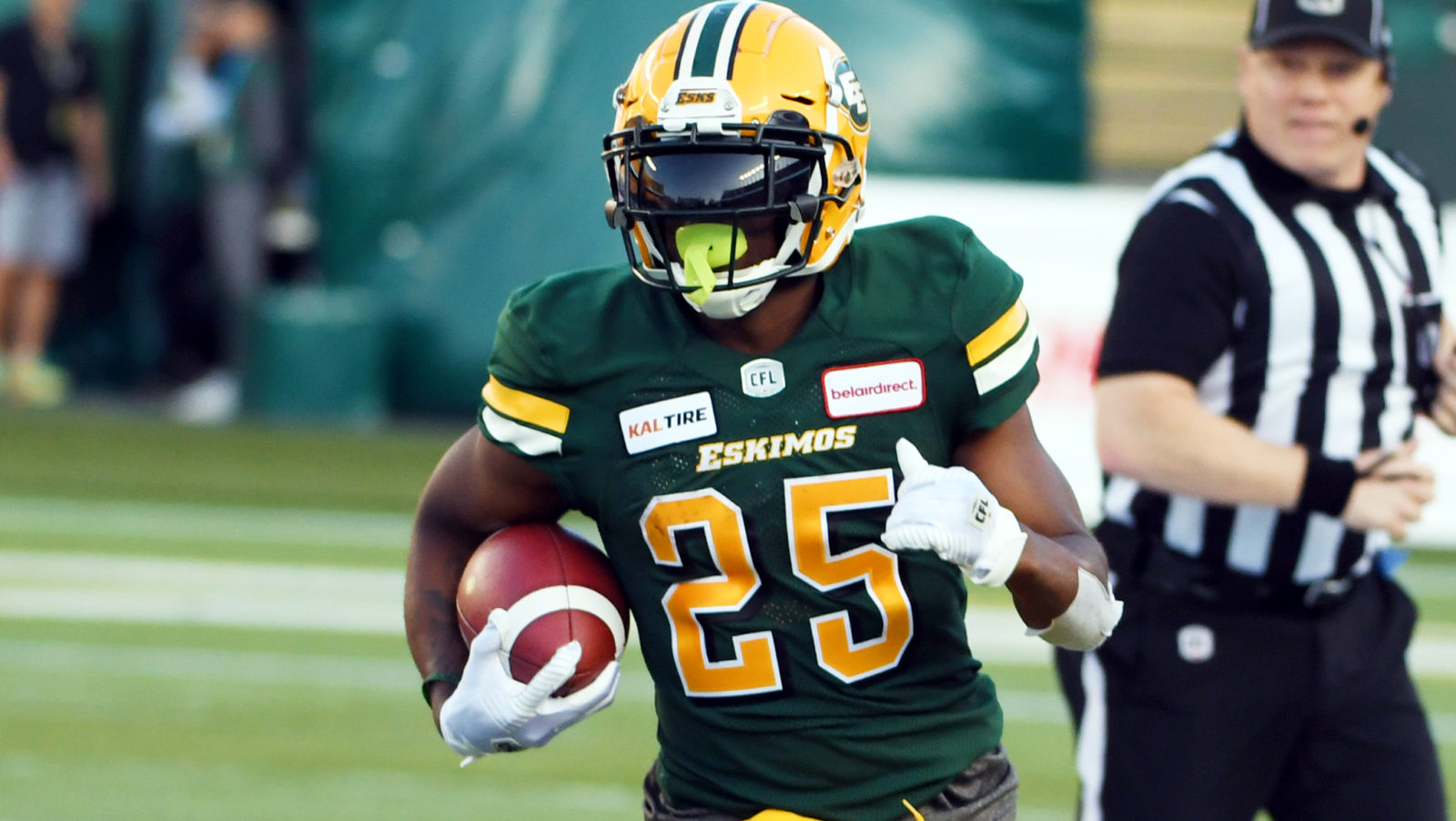 Cooper seizing opportunity to be go-to guy for Esks

Throughout his football career, Shaq Cooper has never missed a chance to seize the moment when an opportunity presented itself.

Coming out of high school, the Coral Gables, Flordia native was playing defensive back, but he always had aspirations of playing on the other side of the ball as a running back.

Little did he now at that time that his perseverance would lead to him having an impact role in the Canadian Football League with the Edmonton Eskimos.

Cooper redshirted his freshman year at Division II Fort Hays State. During that time, he practiced as a defensive back, but in 2012 — his redshirt freshman year — an influx of injuries at the running back position forced the Tigers’ coaching staff to get creative.

With four games left in the year, they turned to Cooper, who had been playing at his regular defensive back spot up to that point in the season. At the end of the year, he gave them no choice but to keep him on offence.

In his first collegiate game as a running back, Cooper had 115 yards and a touchdown while breaking off a 63-yard rush in the process.

In three of the four games in 2012, Cooper had 100-plus yards and at least one major, finishing the year with 356 yards and four scores.

For most individuals making the move to a new position, it wouldn’t have been possible to make that kind of impact right out of the gate. However, Cooper had both the ability and football IQ to make it a seamless transition. It also didn’t hurt to have his cousin Frank Gore — one of the greatest rushers in NFL history — available to talk shop with and take advice from.

“He was always in my ear about being focused, staying out of the way when it came to trouble, making doing the rights things and working hard,” Cooper said. “We’re two different kinds of backs, but he really helped me out with blocking. I went to him when it came to blocking.

“I asked him about reading a defence and knowing when a linebacker was coming or how I could take a different angle or position myself better for a block.”

Following the 2012 season, Cooper sat out the next two years but returned to the field in 2015. He received All-MIAA First-Team honours after rushing for 1,441 yards and nine touchdowns.

“I got to a point in my college career where I knew there couldn’t be any excuses if I wanted to get to where I wanted to go,” Cooper said. “So one of the biggest things for me was trying to get more focused and be more mature and take care of business. Once I learned how to do that, it made everything easier.”

Cooper opted to declare for the NFL Draft following the 2016 campaign. But during training for the combine, he pulled his hamstring. He battled on because he believed he had to run a 40-yard dash or do something to show teams what he was made of. He did end up running at the NFL’s regional combine and crossed the line with a 4.40 40 time.

His agent, Drew Rosenhaus, was able to get him a few minicamp tryouts with the New York Jets and New Orleans Saints. He wasn’t able to work out for the Saints because of his hamstring. He did have a chance to work out with the Jets but unfortunately, nothing came of it.

He missed the entire 2017 season in order to get back to full health. During that time, Cooper dropped Rosenhaus and paired up with a new agent that knew Eskimos general manager Brock Sunderland. He reached out and gave him Cooper’s tape and just like that, Edmonton had an interest.

The 27-year-old went to minicamp and impressed, as the team signed him to a deal for 2018. He spent most of the year on the practice roster, waiting for an opportunity. He was able to appear in a pair of games that season, going for 144 yards on 25 carries.

After his first year in the league, Sunderland chatted with Cooper about his role with the team and laid out the plan for 2019. C.J. Gable was still the feature back for the Esks, but Cooper was going to get an extended look.

He didn’t have to wait long for a chance, as an injury to Gable in Week 7 meant Cooper was the go-to man in the run game against the Toronto Argonauts. Once again, he rose to the occasion, going for 128 yards and a score on 22 touches.

“That definitely gave me a big confidence boost,” Cooper said of the performance. “I didn’t play for half a year and then I get my number called and in my first game, I go for over 100 (yards). It was a blessing and I was happy to be out there. I was fighting and I was just happy to show the coaches that I’ve got it.

“I feel like I can do it all and they can trust me out there. Every opportunity you get, you really have to take advantage of it and make the best of it no matter what. Coach (Jason) Maas always said when your number gets called, you have to be ready and that’s how I practiced every day. I practiced like I was in a game.”

Cooper made five appearances this past season and when he got a chance with the ball in his hands, he showed out. In the last three games of the regular season alone, he ran for 224 yards and a touchdown.

He finished the season with 361 yards and two majors on 68 carries.

The off-season rolled around and Cooper re-upped with the Esks a month out from free agency opening. Meanwhile, Gable went through free agency without signing, later hinting at a possible retirement.

“It’s pretty tough, cause he was there before I had even gotten (to Edmonton),” Cooper said. “Even before I got to minicamp, I wrote to C.J. and asked if he could help me learn the offence and teach me some plays. And he taught me. We were talking over Instagram and he was teaching me as we got closer to minicamp.

“That’s why I appreciate him so much because he went out of his way to help me out. Some guys don’t do that because they feel like you’re coming for their spot. Me and C.J. kind of had a bond before we even met each other. He’ll forever be my brother and I’m just thankful.” 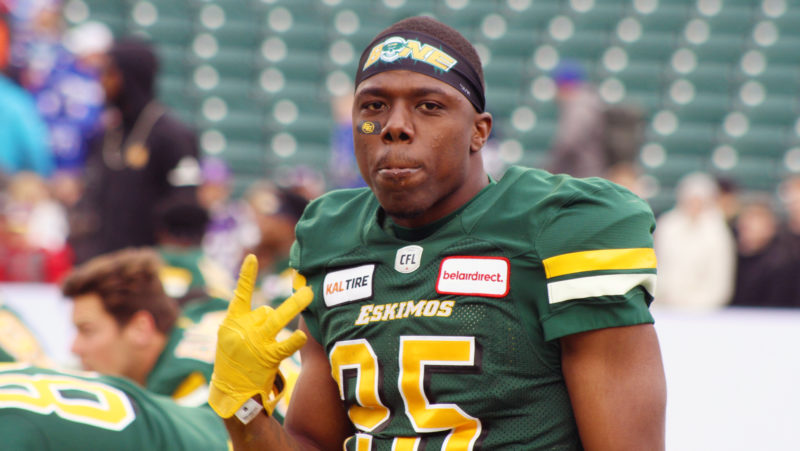 With a new season comes changes to the Esks. The biggest one may very well have been the firing of Maas and the hiring of Scott Milanovich, who will also be serving as the offensive coordinator. Milanovich has also brought in Terry Eisler to be the running backs coach.

Cooper added that while he hasn’t met the coaches just yet, he’s talked to Trevor Harris and has a good idea of how everything will look in 2020.

He’s currently back home in Miami, Florida and is chomping at the bit to get back to football. He’s been working out as often as possible and spending time with family. Whenever the opportunity arises for him to take the field with his Eskimos teammates, Cooper knows he will once again seize the chance to shine, and he has set out some goals for himself as he looks to become one of the top backs in the league.

“I really want to show the league and show everybody what I can do. People kind of know, but I just feel like I’ve got a lot more to prove. So I want to win a Grey Cup and be a beast this year.”